E3+E5 Operation Has Started on the Tohoku Shinkansen 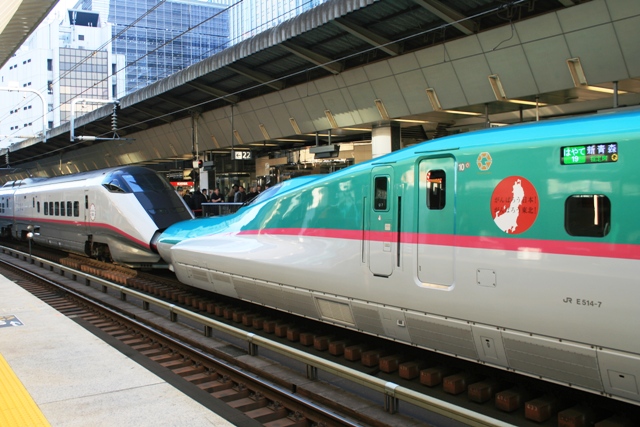 
On November 19, JR East launched 3 more sets of the Shinkansen EMU E5 series to enhance their transportation capacity. As a result, we became able to see coupling operations of E5 and E3 series on the Tohoku Shinkansen (see the top photo). As I mentioned in my July 7th blog, EMU E5 series is the newest Shinkansen train with a maximum speed of 300km per hour.

Since its debut on March 5th this year, 3 sets of E5 series have been operated alone as super express train "Hayabusa (Falcon)". But after launching 3 more sets of E5 series, JR East has started coupling operations of E5 and E3 series as super express trains "Hayate", "Yamabiko" (E5) and "Komachi" (E3) as well. (The detail commentary on the "coupling operation" on the Tohoku Shinkansen is described in my October 27th blog.)

In the meantime, EMU E5 has several new facilities as the newest Shinkansen train. One of them is "Gran Class (First Class)". The seats are similar to those of first and business classes in aircrafts. Meals, drinks and several amenities such as scuffs, a blanket, an eye mask and magazines are provided at no extra charge. I would like to ride this attractive "Gran Class" someday. But of course the price is also handsome.

For your information, JR East plans to raise the maximum speed of Tohoku Shinkansen to 320km per hour in early 2013 using EMU E5 and E6 series. 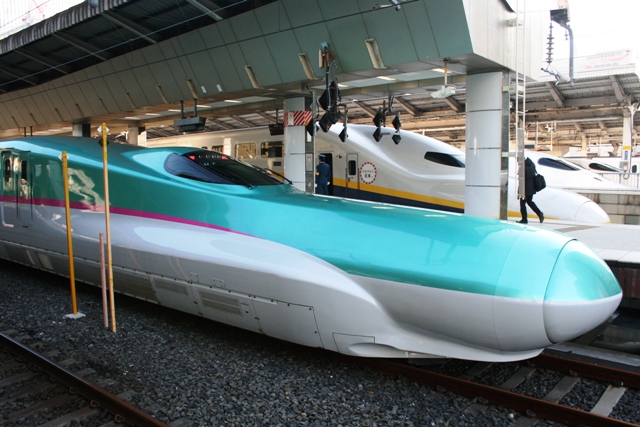