The Main Fleet on the Tenryu-Hamanako Line 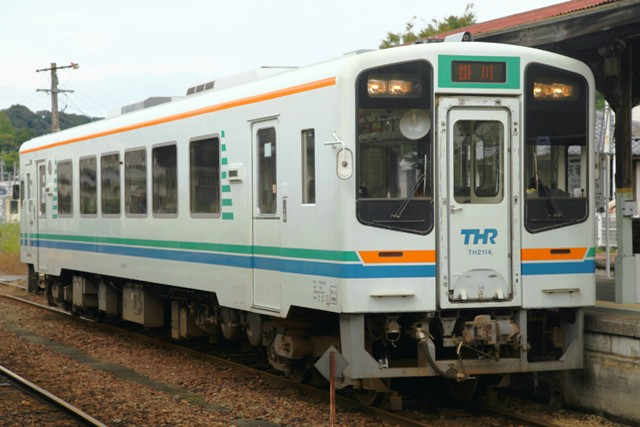 Tenryu-Hamanako Railway is a local company in Shizuoka Prefecture west of Tokyo. The company has been operating the Tenryu-Hamanoko line since 1986 when they took over the Futamara line of Japanese National Railways. Connecting Kakegawa and Shinjohara on the JR Central Tokaido main line, its route length is 67.7 kilometers. The track is single and non-electrified, and the gauge size is 1,067 millimeters. The Tenryu-Hamanako line functions as a northbound detour route of the Tokaido main line. A lovely diesel railcar is operated every half an hour on average.

The main fleet on the line is the diesel railcar, TH2100 series. It has an 18 meter-long steel body and a diesel engine, which was manufactured by Cummins Inc., with a 257 kW/2,000 rpm output. The transmission system is hydraulic. There are two groups of the TH2100 series. The first batch was launched in 2001 under the name of the TH2000 series. A total of 3 units were built by Niigata Tekkosho (presently Niigata Transys). In 2003, the security brake system of these 3 units was modified and they were renamed as the TH2100 series. The second batch was introduced as brand-new cars in 2004. A total of 11 units were built by Niigata Transys using the new security brake system. 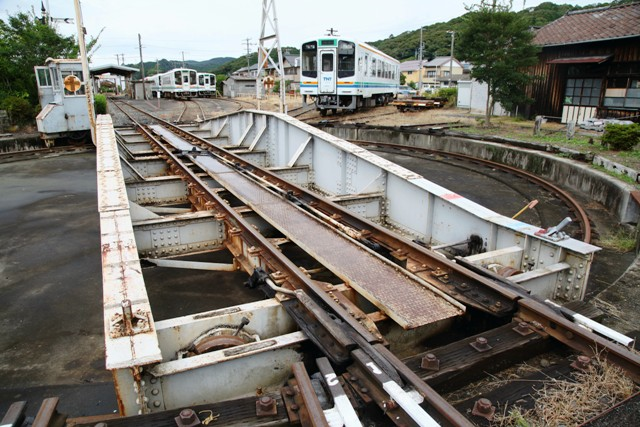 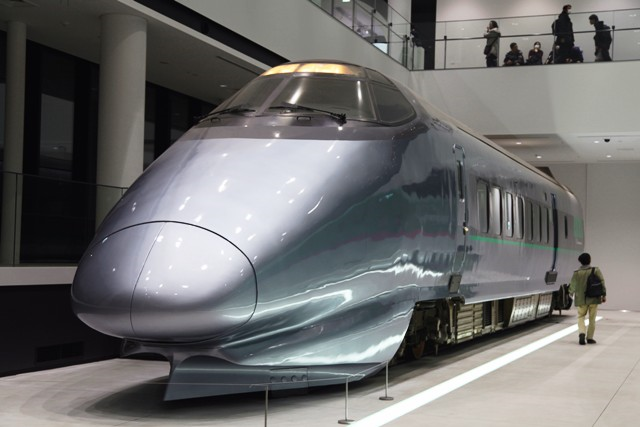 EMU JR East 400 series is preserved in the Railway Museum

The 400 series was launched in 1992. A total of 12 sets, 84 units, were built by Tokyu Sharyo, Kawasaki Heavy Industries and Hitachi. The length of the body is 20 meters, while a full-sized shinkansen train body is 25 meters. The width of the body is 2.945 meters, which is narrower than that of a full-sized shinkansen train. Because of its narrow width, the 400 series has special steps that are automatically drawn from the body to fill in the gaps between the passenger doors and the platform at stations on the standard shinkansen.

The technical specification of the 400 series is rather old. For instance, its electric control system is not the advanced VVVF (variable frequency drive), but the old thrystor drive. However, the design of the body is futuristic, specifically its long nose and the silver metallic body.

The 400 series was replaced by the E3 series, and retired from the track in 2010. Currently, only one unit (number 411-3) is preserved in the Railway Museum. 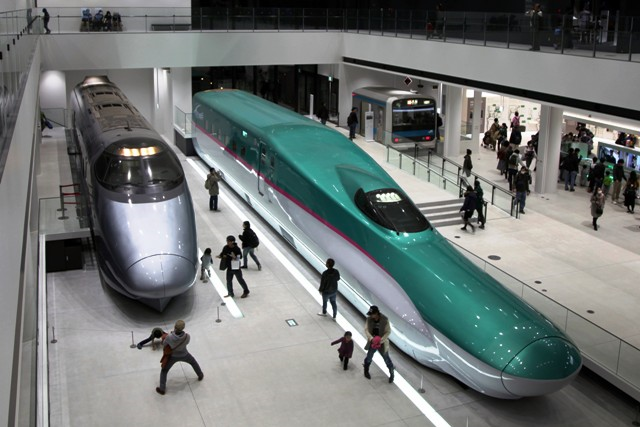 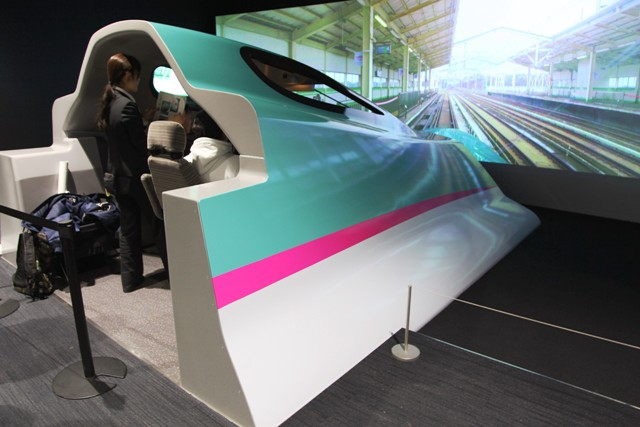 Subsequent to my last post, I am going to continue to show you a new exhibition in the Railway Museum.

On July 5th, 2018, an annex, namely South Building, was opened in the museum. South Building has many new exhibitions such as Shinkansen trains. Of course they are very interesting, but my recommendation is a driving simulator of the EMU Shinkansen E5 series on the 2nd floor. The visitors can enjoy its high speed driving experience using the simulator. Sitting on the driving seat in the mock-up of the E5 series, I saw not only kids but also elderly persons immersed in pleasure, as it provides a highly realistic Shinkansen operation simulation.

Generally speaking, development of high speed trains itself isn't so difficult, if appropriate accelerating and braking systems are equipped. The problem is the concern for the environment, specifically noise, because Japan is a densely populated country. A countermeasure for noise is essential for high speed train development. For that purpose, the head car of the E5 series has a 15 meter-long nose to reduce the tunnel boom. 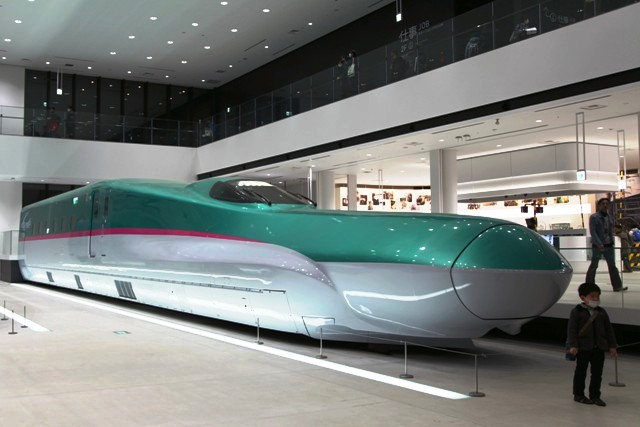 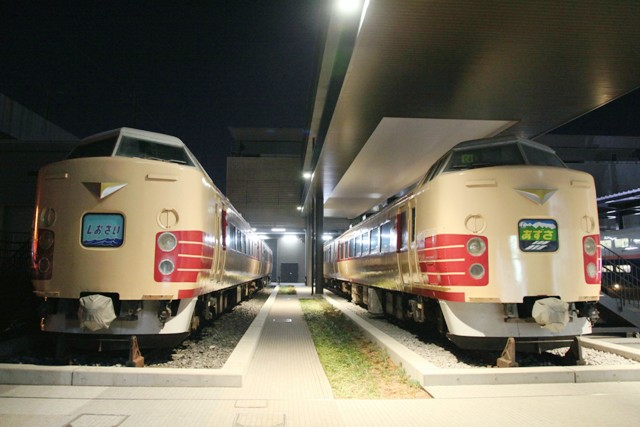 I visited the Railway Museum in Saitama City for the first time in two years. What was the news with this rail-fans' paradise?


The museum opens for limited groups under the name of the Night Museum. This special event is held every weekend from 6.30 pm after the close of the ordinary opening time. I joined the Night Museum on a weekend as a member of one travelers' group.

Firstly, I saw some renovated exhibitions in the outdoor venue. They were the EMU JR East 183 /189 series (KuHa 183-1009, KuHa183-1020, MoHa 189-31 and MoHa 188-31). The 183 /189 series was launched in 1972 for limited express trains on the direct current routes of the Japanese National Railways (JNR). The bodies of these trains are frequently called "JNR limited express color". Although JNR has been abolished, many rail-fans are still boosterish about this coloring, as it fits into any kind of scenery in Japan from urban business centers to mountain forests.

Secondly, I found a new exhibition in the same venue. It was unit E153-104 of the EMU JR East E1 series for the Tohoku and the Joetsu Shinkansens. The E1 series was the first double-decker Shinkansen trains launched in 1994. They were built as commuter trains, which transported large numbers of people during rush hour. One set of the E1 series was composed of 12 cars, which could accommodate 1,235 seats. The E1 series were retired from the tracks in 2012. Unit E153-104 is only one unit, which is preserved. 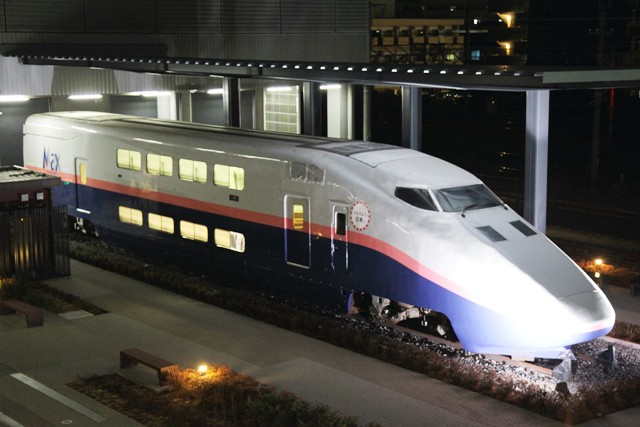 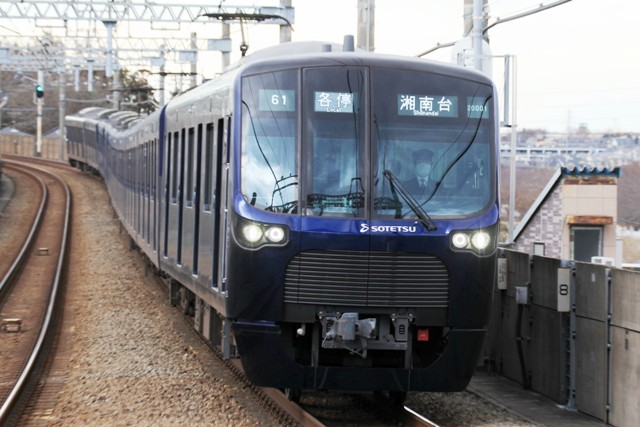 EMU Sotetsu 20000 series arrives at Izumi-chuo station on the Izumino line
On February 11th, 2018, Sagami Railway (Sotetsu) launched the first set of a new commuter train, the EMU 20000 series. It was the first introduction of a new model in almost nine years. The 20000 series will be directly operated onto the Tokyu line in the future.

What was the background of this new model introduction?

Railway business competition in the Tokyo metropolitan area is fierce. The railway companies have to provide against future depopulation in the area. In other words, they have to think deeply about what particular investment would be the most effective. Sotetsu's weakness is their railway network. Sotetsu trains don't run into downtown Tokyo, so that they should construct a connecting line from their Nishiya station to the existing Tokyu line to enhance convenience for passengers. Their goal is to operate direct access trains to downtown Tokyo via the Tokyu line using the 20000 series.

The 20000 series has slightly narrower bodies than those of the existing Sotetsu trains, because the limit of the vehicles on the Tokyu line is slightly narrower than those of the Sotetsu lines. The frontal design of the 20000 series is quite unique. It looks like the latest automobile front grille. It is flashy, but not exactly my cup of tea to be honest. I am a bit afraid that the novelty of the frontal design will soon pall on the passengers.

The connecting route between the Sotetsu and the Tokyu lines will be opened in 2022. 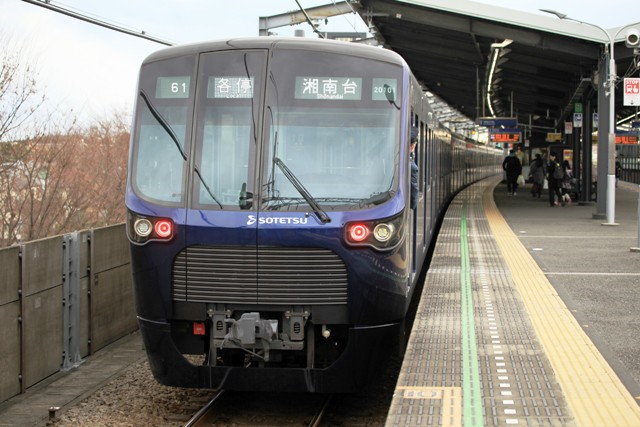 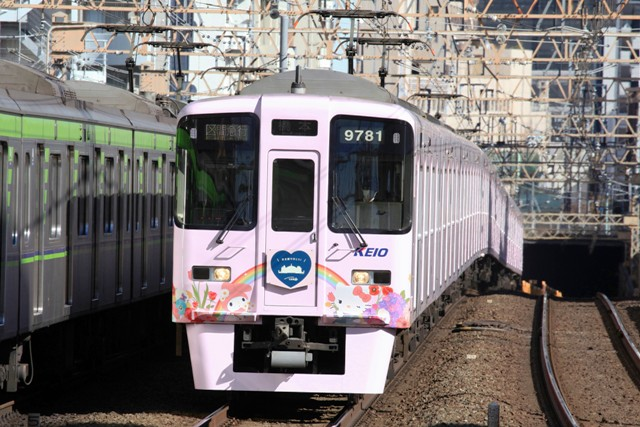 9731F of the EMU Keio 9030 series arrives at Sasazuka station

Sanrio Puroland is a famous indoor theme park located near Keio Tama-center station on the Keio-Sagamihara line. In accordance with the promotion of tourism to Sanrio Puroland, Keio Electric Railway and Sanrio Entertainment Company jointly launched a new poster train on November 1st, 2018.

It is 9731F of the EMU Keio 9030 series. The 9731F was originally launched in 2006 as the 9th set of the 9030 series. Keio recently fully wrapped this 10-car train with lovely Sanrio mascots such as Hello Kitty and My Melody. After its debut, the poster train became very popular among girls and kids, and even their mothers. Many female employees in my office, who live on the Keio line, are also very fond of this poster train.

As a matter of fact, 9731F is the 2nd Sanrio poster train on the Keio line. The first one was 9749F debuted in 2016. It was also popular among children, but it was reverted to an ordinary design later. I think that the design of 9731F is more sophisticated than that of 9749F.

Incidentally, the 9030 series was commissioned in 2005. A total of 20 sets, 200 units, were built by Nippon Sharyo. The 9030 series is a part of the 9000 series group, but the 9030 series only can be directly operated onto the subway, Toei-Shinjuku Line, via Shinjuku station. One set of the 9030 series is composed of 5 motorcars and 5 trailers (5M5T). It has the IGBT-VVVF (variable frequency drive) inverter electric control system made by Hitachi. 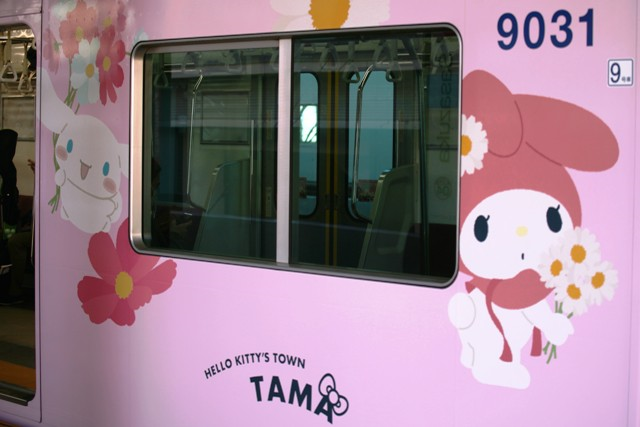 9731F of the EMU Keio 9030 series stands at Meidaimae station