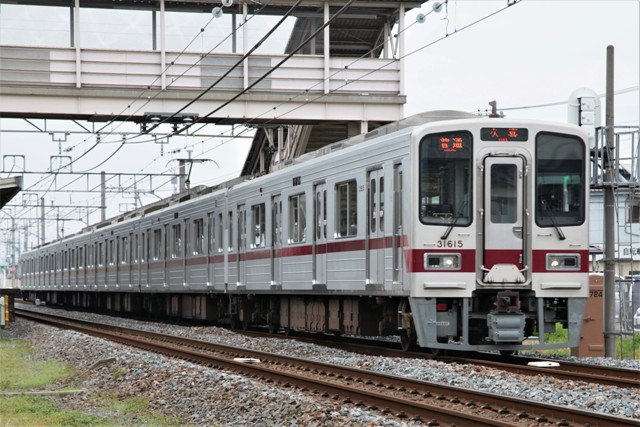 EMU Tobu 30000 series leaves Morinji-mae station on the Isesaki Line
One and a half months have passed since Japan's Prime Minister Suga declared a state of emergency again in ten prefectures including Tokyo because of new coronavirus infection risks. There is a sign that the situation will improve, but the governor of Tokyo still announces that Tokyoites should refrain from any non-essential and non-urgent outings. It's unfortunate, but OK. I'm going to continue introducing my old photos, which I recently rediscovered on my hard disk.
The EMU 30000 series is one of Tobu's representative commuter trains. It was introduced in 1996. 30 sets, 150 cars in total, were built from 1996 to 2003 by Alna Koki, Tokyu Sharyo and Fuji Heavy Industries. The overall mission of the 30000 series was direct operation between the Tobu-Isesaki, Tokyo Metro-Hanzomon and Tokyu-Den-en-toshi lines. Several new devices, such as an IGBT-VVVF invertor (Insulated Gate Bipolar Transistor-variable frequency drive) electric control system, a one handle master controller and high intensity discharge front lamps were equipped for the first time on the Tobu trains.
25 years have passed since the 30000 series debuted. Almost all sets of the 30000 series trains have already been transferred to the Tojo line, because a new model, the EMU 50050 series, has been introduced onto the Isesaki line since 2006. As a result, only two sets of the 30000 series are still operated on the Isesaki line. Please take photographs of the 30000 series operated on the Isesaki line before it's too late. 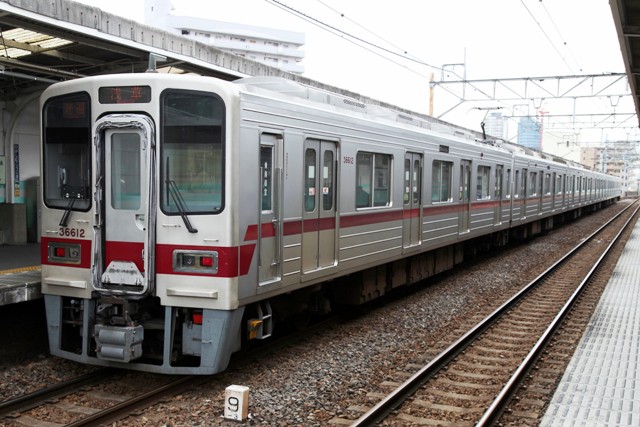 When I visited Kyoto City last year, I came across an old commuter train in Kyoto station. It's a nostalgic model, the EMU JR West 205 series on the Nara line. The 205 series is 1,067 millimeter-gauge and 1,500 V DC EMU, which was launched by the Japanese National Railways (JNR) in 1985. It has been widely operated on the urban routes in Japan. This model has a stainless steel body and DC motors with a resistor control system. 1,461 units in total were built from 1985 to 1994.
Nearly four decades have passed since the 205 series debuted. JNR was split into seven railways companies such as JR East and JR West in 1987. New companies uniquely have been introducing new trains.
It's time for the 205 series to retire specifically in the JR East area. Many units have already been dismantled. The remaining units have been modified and moved to the local areas and overseas namely Indonesia. On the other hand, the 205 series is still active in the JR West area. For example, 9 sets, 36 units of the 205 series, are operated on the Nara line. It has gabled stainless steel bodies with a light blue colored stripe. As a rail fan, it's exciting to see the old 205 series in the JR West area. Along with the EMU 103 series, the 205 series is the evergreen commuter train in the JR West area. The JR West EMU 205 series... take care yourself. Until next time.
Labels: Outside Tokyo

Advent of Spring on the Odakyu Line 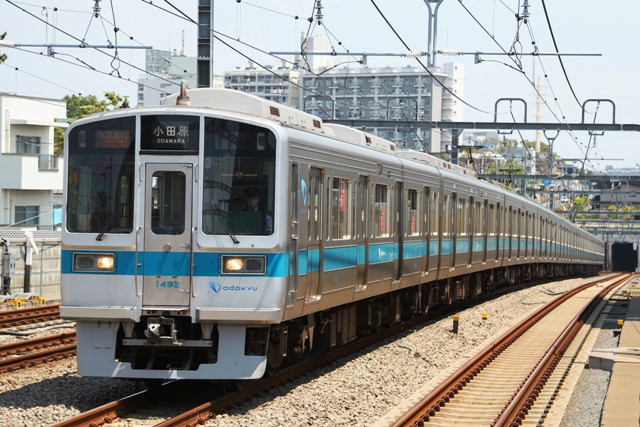 1092F of the EMU Odakyu 1000 series passes through Umegaoka station
It's mid-February already. Time really flies. I recently visited a plum grove in the neighborhood with my family to find an advent of spring.
Our destination was Hanegi Park in Setagaya Ward of Tokyo Metropolis. It looks just like a common public park located in the residential area, but a plum grove in the park is famous for local people. When we visited there, white, pink and red colored plums were one-third in bloom. The visitors were enjoying the early days of the 2021 plum viewing season in their own way. I specifically enjoyed seeing a cat sleeping on a stone poem monument backed by fully blown pink colored plum blossoms. He (or she) never worried about visitors, as it was warm and comfortable on the stone monument. The combination of full blown plums and the sleeping cat was indeed picturesque.
To get to Hanegi Park, the nearest railway station is Umegaoka on the Odakyu line. Taking this opportunity, I'm going to show you a precious train, which I took a photo at Umegaoka station. It's 1092F (set 1092) of the EMU Odakyu 1000 series built by Kawasaki Heavy Industries in 1992. As you know, the most 1000 series trains recently have modern LED destination displays on their front and side bodies, but the displays of 1092F are still old rollsigns. It's nostalgic and popular among trainspotters like me, because of its scarcity. Please take photographs of these classic destination rollsigns before it's too late. 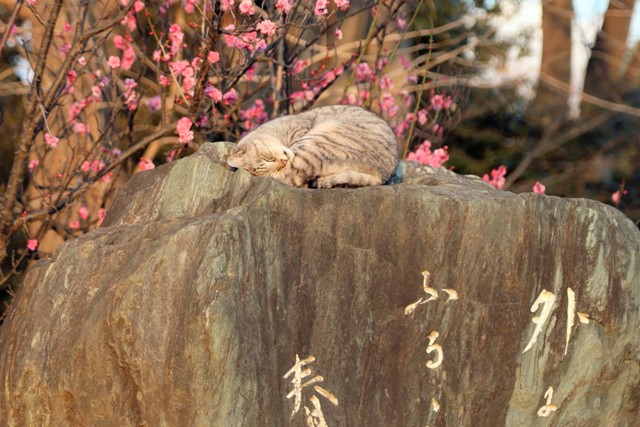 A cat sleeps on the stone poem monument in Hanegi Park
Labels: Odakyu 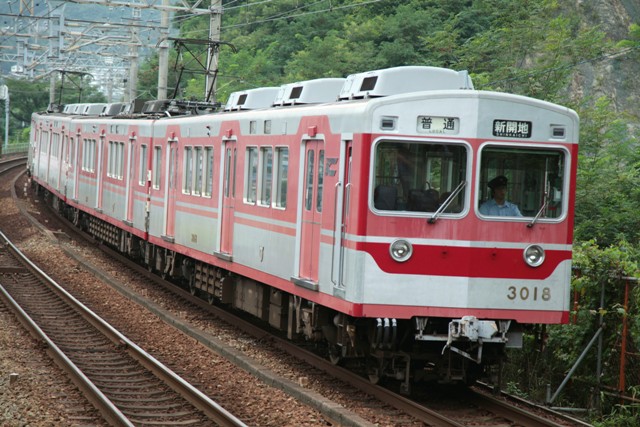 Japan's Prime Minister Suga declared a state of emergency again in ten prefectures including Tokyo because of new coronavirus infection risks. Following this declaration, the governor of Tokyo announced again that Tokyoites should refrain from any nonessential and non-urgent outings. I reluctantly agreed to that. Instead, I'm going to show you the photographs, which I rediscovered on my hard disk.
Kobe Electric Railway (Shintetsu) has a 70-kilometers-long network in Hyogo Prefecture about 600 kilometers west of Tokyo. The EMU 3000 series is a unique commuter train on the line. It was launched in 1973 as Shintetsu's first train with aluminum alloy bodies. 36 cars in total were built by Kawasaki Heavy Industries. 47 years have already passed, but 28 cars are still operated on the track. One set consists of four motorcars. It doesn't have trailers as Shintetsu has steep tracks passing through Rokko Mountains. One of the features of this model is its cruise control system (constant-speed travel controller). It helps train drivers specifically on the steep sections.
Because of its front face, the 3000 series is called "Ultraman" among rail-fans. Ultraman is a famous TV series in Japan. It's very popular among kids. I'm also fond of Ultraman, as he's a hero protecting the earth from evil monsters. The two large front windows, the silver and red colored bodies of the 3000 series are indeed similar to Ultraman. I believe that the EMU Shintetsu 3000 series is also an ultra-hero among local people. 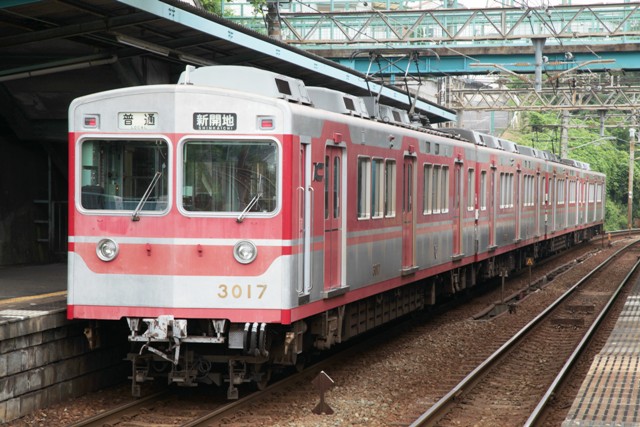 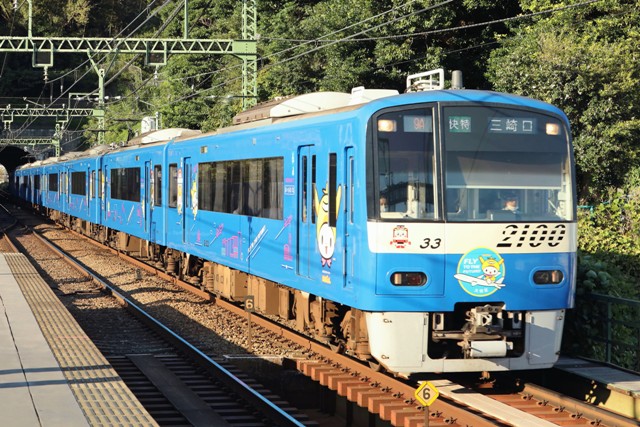 Set 2133 of the EMU Keikyu 2100 series, Hanepyon Poster Train
Speaking of Keikyu, people can imagine red colored trains. It's correct, but there are exceptions. For instance, Keikyu operates a yellow colored train, namely Keikyu Yellow Happy Train using one set of the EMU 1000 series. Another example is blue colored trains named Keikyu Blue Sky Trains using the EMU 600 and 2100 series, one set of each. Needless to say, the purpose of these trains is to promote tourism to the sightseeing spots on the Keikyu line.
From September 14 to November 28 last year, Keikyu operated a poster train named Hanepyon Train using an existing blue colored train. It means that one set of Keikyu Blue Sky Trains was modified to Hanepyon Train in the above period. What's Hanepyon? It's the official character of Ota Ward in Tokyo Metropolis. Keikyu line penetrates Ota Ward from north to south. The purpose of Hanepyon Train was to promote tourism to Ota Ward. The most famous spot in Ota Ward is Tokyo International Airport (Haneda). Haneda is not only the transportation hub but also the sightseeing spot with a large shopping mall. Ota Ward is enthusiastic about attracting customers to the airport area.
The vehicle for Hanepyon Train was an 8-car train, set 2133 of the EMU 2100 series. One of the features of this train is its comfortable cross seats with 2+2 configuration. We could see many Hanepyon characters on the train body. It definitely contributed to promote tourism to Ota Ward. Thank you Hanepyon Train. 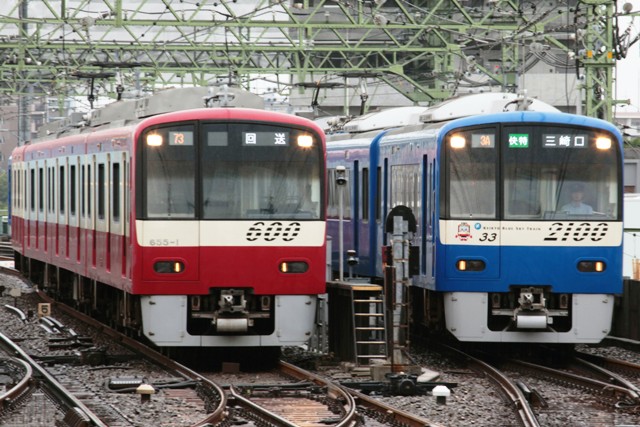 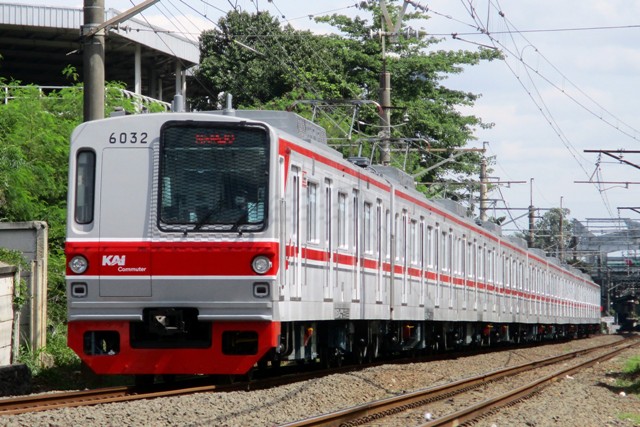 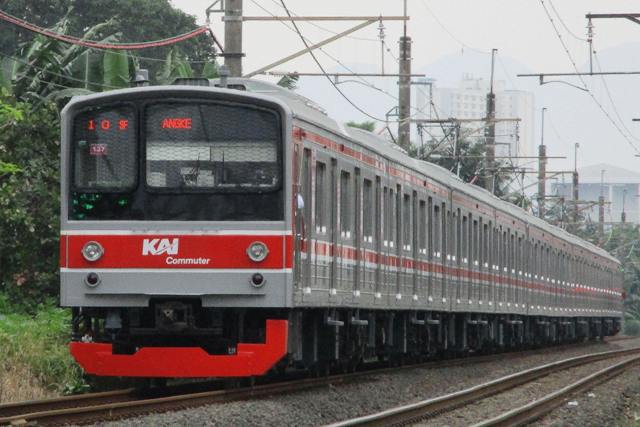 Preserved Train on the Setagaya Line