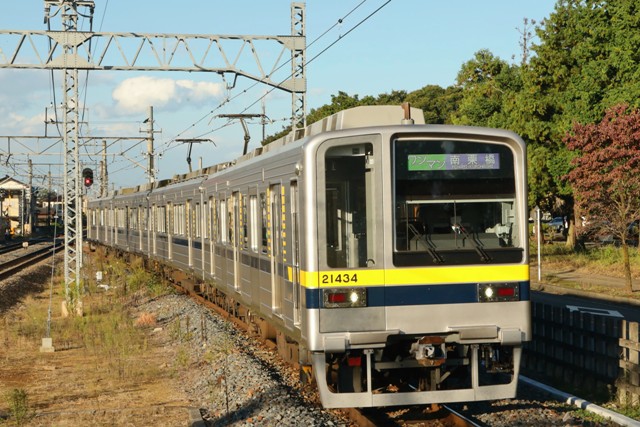 On March 27th this year, the last set of the EMU Tobu 20000 series quietly retired from the subway Hibiya line. It was the end of an era.

After its retirement from the Hibiya line, the 20000 series was renovated and transferred to Tobu's local lines in the countryside. The new name of the renovated 20000 series is the 20400 series. What are the major differences between the old 20000 and the new 20400 series? Firstly, the number of cars per set decreased from 8 (the 20000 series) to 4 (the 20400 series). Secondly, manual operation buttons for the passenger doors were equipped anew beside each door of the 20400 series. Thirdly, the colors of the body stripes were changed from russet brown to yellow and dark blue.

On September 3rd, 2018, the first set of the 20400 series debuted on the Tobu-Utsunomiya line. Tobu Railway... here too surged a wave of generational change. 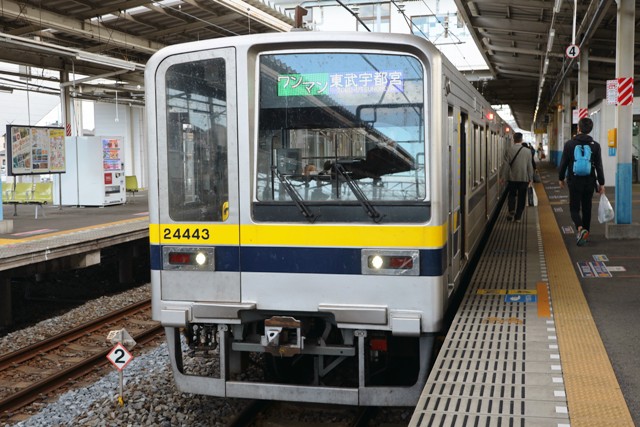 I recently rediscovered photographs of the retired Odakyu Romance Car, RSE on my hard disk.
RSE is an abbreviation of Resort Super Express. The formal name is the EMU Odakyu 20000 series. RSE was launched in 1991, when Odakyu started a direct operation between Shinjuku on the Odakyu line and Numazu on the JR Central Gotemba line. 2 sets, 14 cars, of RSE were built by Nippon Sharyo and Kawasaki Heavy Industries.
The greatest feature of RSE was double decker Green Cars (first class cars) at the center of the 7-car train. Car number 3 and 4 correspond to the double deckers. Each seat on Green Cars had a liquid crystal television. Car number 4 had semi-compartment seats as well. RSE was elected as the 1992 Blue Ribbon Prize train. As you know, this prize is an annual award presented by the Japan Railfan Club, awarded to the best train that was launched in the previous year.
RSE was gorgeous; however, it had been suffering from a decrease in passengers due to recession. Odakyu decided the displacement plan of RSE. Consequently, RSE was retired from the track in 2000. I was sorry to hear that, but the God of trains was with us. In 2013, Fujikyu, a local railway company in Yamanashi Prefecture, purchased one set of RSE, and launched it under the name of Fujsan Express. Unfortunately, Fujisan Express is composed of only three cars without double deckers, but it still has a remnant of its former beauty in the Odakyu-era.
Labels: Odakyu

Coleus Garden on the Tobu-Tojo Line

Coleus is a plant that belongs to the Lamiaceae family. It has multicolored decorative leaves. I recently found a beautiful coleus garden in Musashi Kyuryo National Government Park in Saitama Prefecture. Red, green, yellow and mixed colored coleuses were orderly planted on a slope under a grove. It was very splendid and beautiful.

To visit Musashi Kyuryo National Government Park, the nearest station is Shinrin-koen on the Tobu-Tojo line. It takes 48 minutes from Ikebukuro terminal in a subcenter of Tokyo by "Kawagoe Express" train. Kawagoe Express debuted in March, 2019, to promote tourism to the sightseeing spots in Kawagoe City and other areas such as Musashi Kyuryo National Government Park on the Tobu-Tojo line.

Incidentally, the 50090 series was launched in 2008 under the name of TJ Liner. Six sets, 60 cars, were built by Hitachi. Their sister trains, namely 50000, 50050 and 50070 series are also operated on the Tojo and the other Tobu lines. These trains have basically same technical specifications, and look similar, but only the 50090 series has multi-purpose seats and a purple-colored stripe on the side bodies. This stripe is a symbol of Tobu's high-end commuter train.

I'm going to continue to show you my short stay in Kyoto City last month.

A rickshaw is a human-powered vehicle for transporting people, used as a means of getting around. It was developed in the early 1870's in Japan. The number of rickshaws peaked in the 1920's, and decreased rapidly as it was replaced by other means of transportation. You can no longer see rickshaws in Japan. No, no. That's not right. I certainly saw one carrying tourists on board in the bamboo grove of Arashiyama in Kyoto City. When I strolled in the grove with my family, we came across rickshaws, which have revived as a tourist attraction in the historical city.

In the evening, we came back to downtown Kyoto taking the Hankyu Arashiyama line. Our vehicle was the EMU 6300 series. It's an old model originally developed as a limited express train on the Kyoto main line. The 6300 series is the 1976 Blue Ribbon Winner. As you know, the Blue Ribbon Prize is an annual award presented by Japan Railfan Club to the best train that was launched in the previous year. The 6300 series were then transferred to the Arashiyama line in 2009. The passenger seats were changed from cross to semi-cross (cross and long) seats, as many tourists use this train. Although 45 years have passed since the 6300 series debuted, it's still beautiful. That's Hankyu quality.

The rickshaw and the EMU Hankyu 6300 series... they are evergreen means of transportation in Kyoto City.

After arriving at Torokko-Kameoka station on the Sagano scenic line, we had three options to go back to downtown Kyoto City... the Sagano scenic line again, the JR West San-in main line or the Hozu River boat tour. We took the boat tour, so, I'm going to show you it in this post.
Hozu River boat tour paddles down the rapid stream in a traditional boat without an engine. It took one hour and fifty minutes from Kameoka boarding site to Saga-Arashiyama landing site in Kyoto City. It was quite a long journey as the route was meandering and much longer than railway lines. A local waterman piloted the boat and shot the meandering rapids perfectly. It was a thrilling adventure for sightseers. During the tour, we sometimes came across the trains on the Sagano scenic line travelling along Hozu River. The passengers both on the boat and the train smiled and waved hands to each other. That was a very fun moment for us.
Incidentally, the rolling stock of the Sagano scenic line is unique. Small passenger coaches are pulled or pushed by a diesel locomotive named Class DE10. The locomotive is always coupled at the end of the Torokko-Sagano side, so, a multiple-unit control system is applied on the train. A head passenger coach (SK200-1) coupled at the end of the Torokko-Kameoka side has a cockpit to control the whole train including the rear locomotive, when it is operated as a westbound train bound for Torokko-Kameoka. 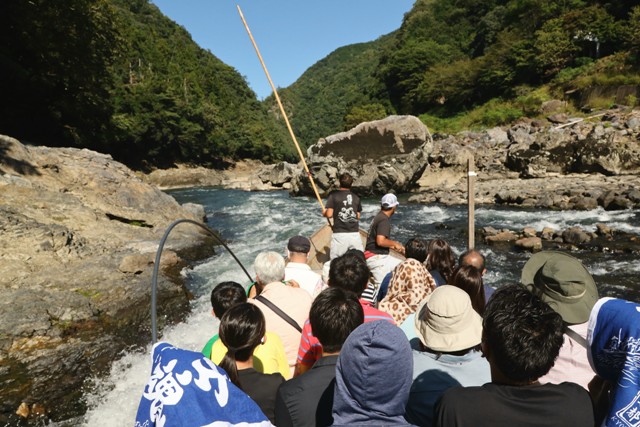 Sagano Scenic Railway is a sightseeing railway company in Kyoto City. It's a subsidiary of JR West, and operates torokko (trolley) trains on the Sagano scenic line. Connecting Torokko-Saga and Torokko-Kameoka, its route length is 7.3 kilometers. The track is single and non-electrified. The gauge size is 1,067 millimeters. The train is operated every hour in the daytime.
The Sagano scenic line was originally opened as a part of San-in main line in 1899. It was abolished in 1989 due to completion of new modern electrified double track nearby. The abolished route was then transferred to newly established Sagano Scenic Railway Company in 1991 to utilize as a sightseeing railway.
The train on the Sagano scenic line is composed of a diesel locomotive (DL) and five passenger coaches. The company owns one unit of DL, named ex-JR West 1104 of the Class DE10 (DE10-1104). The company also tentatively borrows DE10-1156 from JR West, when DE10-1104 is inspected. The Class DE10 was developed in the 1960's by Japanese National Railways. It has a 1,350 PS diesel engine. The axis arrangement is Ao+Ao+Ao+Bo in UIC notation. On the other hand, the passenger coaches named the SK100, 200 and 300 series were modified from the old freight cars, type ToKi25000. A head passenger coach (SK200-1) has a cockpit to control the whole train including the rear DL.
Boarding on the sightseeing train, the passengers can enjoy the beautiful scenery of Hozu River. It's a deep valley even in the city. To be continued...
Labels: Locomotive, Outside Tokyo, SME

Adashino is known as an ancient place for funeral in Kyoyo City. It used to be an aerial sepulture where the dead body was exposed to the wind until it was eroded completely. In 811, Kukai, a Buddhist monk, founded Nenbutsu-ji temple in Adashino to bury remains of the dead, which had been left unattended. Some eight thousand stone Buddhist statuettes, which had been scattered around Adashino, were then collected, and memorialized the souls of the dead.

The retro designed electric car, MoBo 21 series, is popular among sightseers. It has a brown colored 15 meter-long steel body. Its classic double roof, large Z-shaped pantograph and large rounded front lights are definitely my favorite. Two cars, namely MoBo 26 and 27 of the MoBo 21 series, were built in 1994 commemorating the 1200th anniversary of the transfer of the national capital to Kyoto. The technical specification of the MoBo 21 series is rather old, as its travelling apparatus such as the traditional camshaft type rheostatic electric control system was taken from the old retired electric cars.

Let's continue where we left off last post.
There are three kinds of trains operated on the subway Karasuma line. The first one is the EMU Kyoto Municipal Subway10 series, which was shown in my last post. On the other hand, the second and the third ones are both Kintetsu's trains. They are the EMU 3200 and the 3220 series directly operated from the Kintetsu Kyoto line.
The 3200 series originally debuted in 1986 on the Kintetsu Osaka line. It was Kintetsu's first mass production type train with a GTO-VVVF (Gate Turn-Off thyristor-variable frequency drive) inverter electric control system. Using the 3200 series, the direct operation between the Kintetsu Kyoto and the Kyoto Municipal Subway Karasuma lines commenced in 1988. I love this train as it was Kintetsu's first train with beautiful "maroon and silky white-colored" aluminum alloy bodies. The 3200 series is still the largest group from the Kintetsu line.
The 3220 series was launched in 2000. It was developed as a special train being operated onto the subway Karasuma line. It also has aluminum alloy bodies, but its body colors are "earth brown" and "crystal white", with a yellow colored stripe. The odd-shaped face of this train is definitely my favorite. Different from the older 3000 series, the newer 3220 series has an IGBT-VVVF (Insulated Gate Bipolar Transistor-variable frequency drive) inverter electric control system.
The difference of technical specifications between the older 3200 and the newer 3220 series feels the passage of a 14-year time period.
Labels: Outside Tokyo, SME
Newer Posts Older Posts Home
Subscribe to: Posts (Atom)