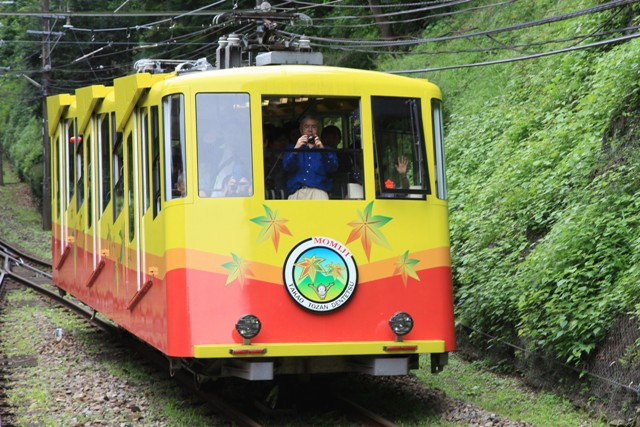 I visited Mt. Takao after a long time. What's new with this holiday mountain? I found that the number of foreign visitors has drastically increased. For instance, I saw many foreigners at a beer restaurant near the top of the mountain, where customers can see the beautiful scenery while drinking superb beers and foods.

To visit this holiday mountain, you cannot go by car. Visitors have three choices to get to the summit... walking, taking a lift or a funicular. As a rail fan, I recommend you take a funicular named Takao Tozan Dentetsu (Takao Mountain Climbing Electric Railway). Connecting Kiyotaki and Takaozan stations, its route length is 1,020 meters. The track was originally completed by Takao Kosaku Tetsudo (Takao Cable-railway) in 1927. The height difference between the two stations is 271 meters. The gauge size is 1,067 millimeters. The operation interval is 15 minutes. It takes about 6 minutes from Kiyotaki to Takaozan station. The funicular passes through two tunnels on the route.

There are two rail cars namely Aoba (green leaves) and Momiji (maple) on the track. Momiji has a yellow and red colored body, which stands for the beautiful autumn leaves on the mountain. Momiji can accommodate 135 passengers. The inclination of the track is not so large at Kiyotaki station, but it gets steeper and steeper toward the top of the mountain, specifically after passing through the mid-course. Eventually, the angle reaches the maximum (31 degrees 18 minutes), which is the steepest track in Japan, just before Takaozan station. 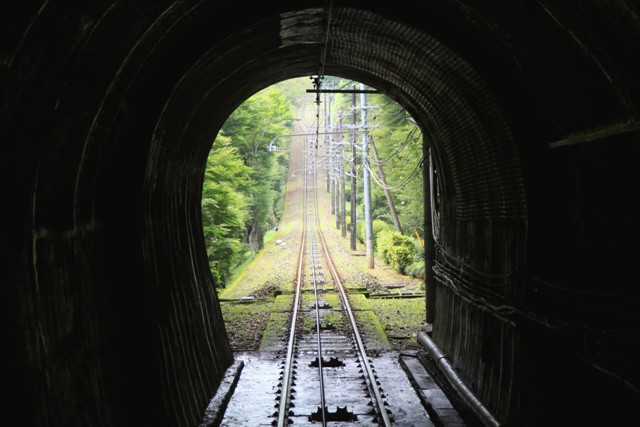 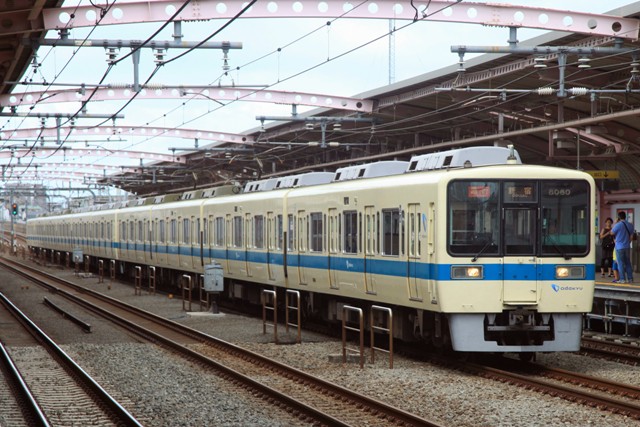 There are several reputable rose gardens in the Tokyo Metropolitan Area. They are Yono Park, Kyu-Furukawa Garden, Keisei Rose Garden, Yatsu Rose Garden and Yokohama English Garden. Are there still more? Yes, Flower and Green Center is another must-see spot. I visited a rose garden of Flower and Green Center in May, and enjoyed the colorful blossoms as well as the sweet fragrances... a total of 1,300 kinds of roses.

To visit this beautiful garden, the nearest station is Hadano on the Odakyu line. What is new with Odakyu? On April 26th, the company announced that a new train, named the EMU 5000 series, will be launched by March, 2020. The introduction of the new commuter train model will be first time in 12 years. What are the distinctive features of the 5000 series? Firstly, the interior of the 5000 series is wider than those of the recent models such as the 3000 and the 4000 series. Secondly, the front of the body is streamlined, which is now in fashion.

What will happen after the introduction of the brand new 5000 series train? The oldest 8000 series will be gradually retired from the track. The EMU 8000 series, which was launched in 1982, is a fully painted steel body train. Its major assignment is as an express train to transport commuters from the western suburbs to the city center of Tokyo.

Take photos of the 8000 series before it is too late! 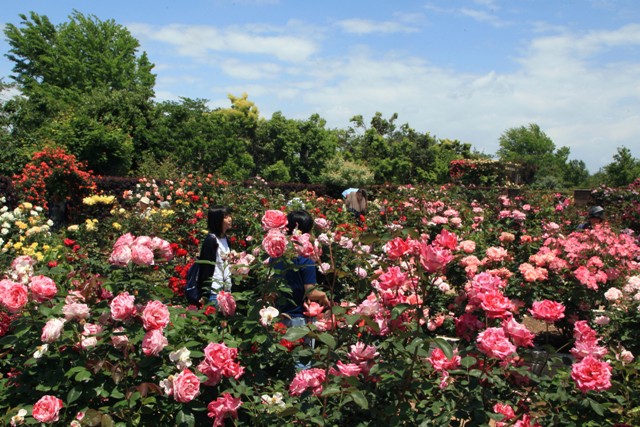 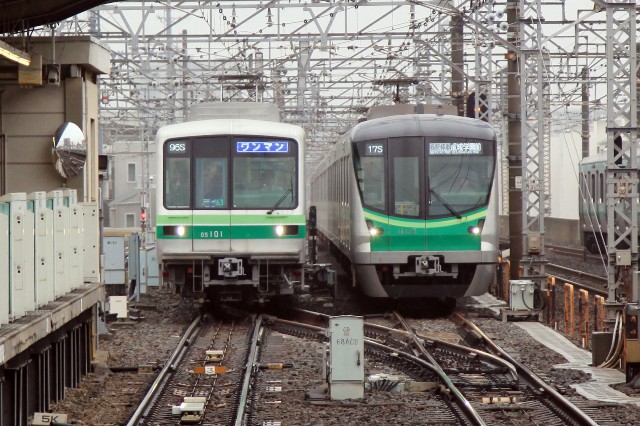 The rainy season continues in Tokyo. From early June to mid-July, Tokyo has a hot and humid rainy season, called Tsuyu. It is a gloomy period for Tokyoites before midsummer, but it is a pleasure to see some kinds of beautiful flowers, which only bloom in this season. Along with hydrangeas, irises are typically seen during the rainy season in Tokyo. The large colorful blossoms are gorgeous and elegant. It is said that the practice of viewing iris flowers began to spread throughout Japan in the 13th century by flower-loving Samurais.

Last month, I visited a local iris garden in Adachi Ward, called Shobu-numa Garden (Iris Swamp Garden). The garden is located just in front of Kita-Ayase station on the Tokyo Metro Chiyoda line. If you go down from the station platform by the elevator, you can see beautiful iris flowers immediately after opening the elevator doors. What a convenient location it is! To our joy, admission to Shobu-numa Garden is free, as it is operated by Adachi Ward Office...thank you.

Incidentally, the platform length of Kita-Ayase station was recently extended from 80 to 200 meters. It is now enough to accommodate 10-car trains. As a result, not only the short EMU 05 series trains, but also the long EMU 16000 series trains can stop at Kita-Ayase station. It is good news for local people, as the number of stopping trains has increased. The completion of the long station platform will contribute to the growth of the Kita-Ayase area. 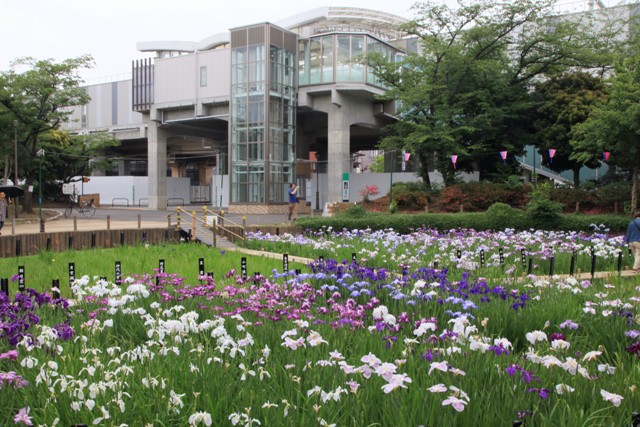 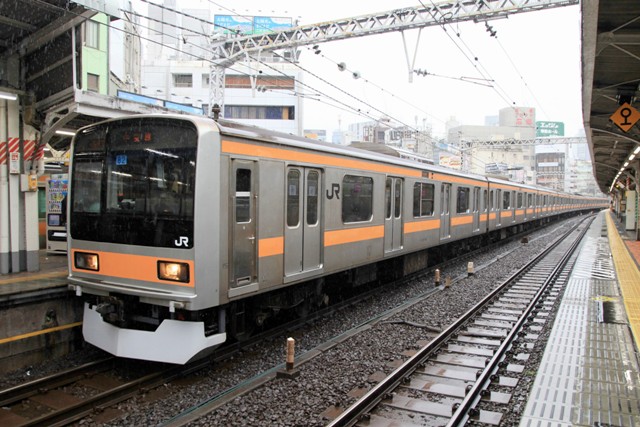 As I posted before, JR East announced in September, 2018 that the EMU 209-1000 series on the Joban line would be transferred to the Chuo line. It was caused by the renovation and coupling of additional cars for the existing Chuo line trains (the EMU E233 series). In particular, toilets would be newly equipped and the Green Cars (the first class cars) would be added for improvement in the quality of passenger services. During this work period, trains on the Chuo line would be shorthanded, so that the 209-1000 series would be temporarily invited from the Joban line.

On March 16th, 2019, JR East launched the EMU 209-1000 series on the Chuo line. Currently, a total of two sets (ToTa81 and ToTa82), twenty cars, are commissioned on the line. Because of its technical restrictions, these two sets are operated on a limited section between Tokyo and Takao stations. In other words, the 209-1000 series cannot run beyond Takao station on the Chuo line, and cannot go onto the other lines, for example the Ohme line. 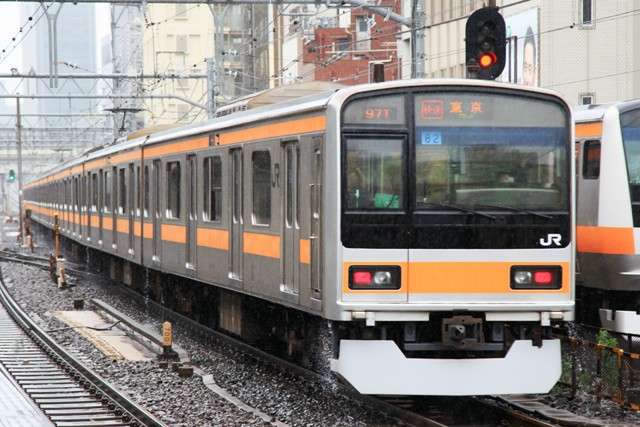 The Inokashira Flower Line in Spring 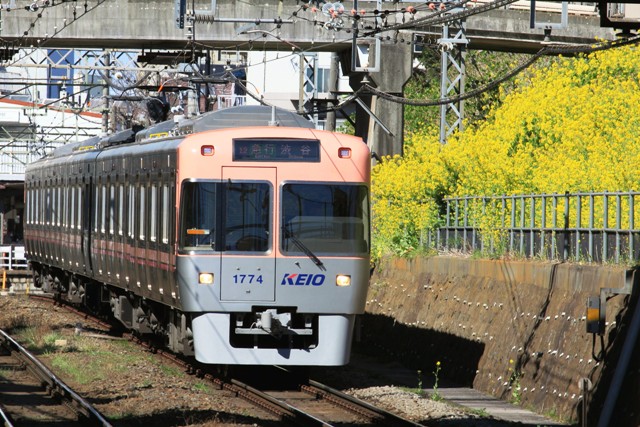 It is the rainy season in Tokyo. On June 7th, the Japan Meteorological Agency announced that this year's rainy season had begun in Tokyo. From early June to mid-July, the Tokyo metropolitan area has a hot and humid rainy season called Tsuyu. Before starting the summer railway travel season, I am going to show you my unreleased spring railway photos today.

The Keio-Inokashira line is famous for its beautiful flowers blooming on the sides of the track. For instance, hydrangeas are reputable in early summer near Meidaimae station. Cherry blossoms are also beautiful in spring near Takaido Station. There is more. Canola flowers are brilliant in early spring near Shin-Daita station. Passengers can enjoy that numerous yellow flowers are blooming beautifully in the sunshine on the embankments of the railway tracks. It also functions to prevent slope failure.

Incidentally, The Inokashira Line is Keio's short commuter route connecting Shibuya and Kichijoji. Its line length is 12.7 kilometers. The track is 1,067 mm-size double. The electric system is 1,500 V DC overhead. Although the Inokashira Line is a short route, the express train is frequently operated for flying passengers. It connects with a local train at Eifukucho station, which is located on the middle point of the line. The EMU 1000 series is the sole model on the line. The commercial operation of this EMU started in 1996, as the first 20-meters long body train on the line. One set consists of 5 cars with a VVVF (variable frequency drive) control system. 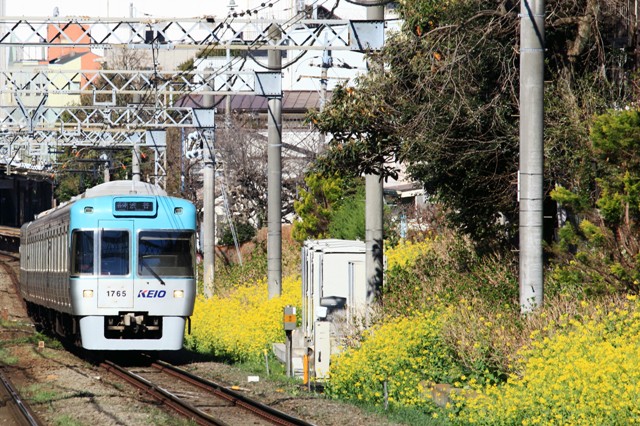