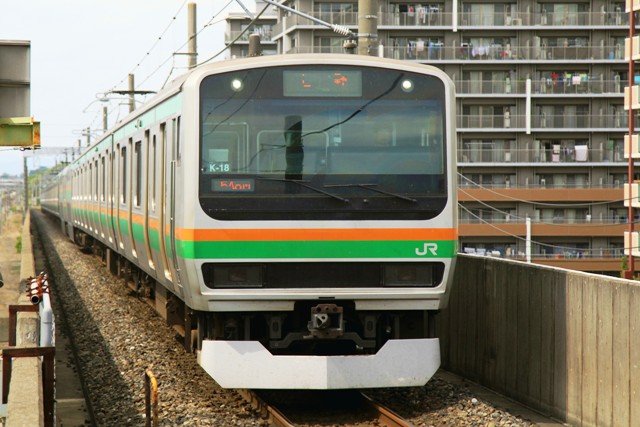 It is still May, but it is just like mid-summer in the Tokyo metropolitan area. The maximum daytime temperature is often over 30 degrees Celsius. Is it an effect of greenhouse gasses?

I recently visited a flower road along the Kasai irrigation canal in Kuki City, Saitama Prefecture with my family. It is a 10-kilometer-long footpath with numerous beautiful blossoms. Cosmoses are planted in autumn, and poppies are seen in spring. When we visited there, it was fine weather and the poppies were in full bloom... very colorful and unique.

On the way back home, I enjoyed taking train photos at JR East Higashi-Washinomiya station on the Tohoku main line for a short time. I was able to shoot the EMU E231 series, which belongs to Oyama rail yard. It was a 15-car train consisting of a 10-car main set and a 5-car additional set. The E231 series is an EMU widely operated in the Tokyo metropolitan area. It was launched in 2000 on the Tohoku main line. Different from the E231 series on the Yamanote and Musashino lines, the E231 series on the Tohoku main line has 6 doors per unit. The bodies are stainless-steel, with orange and green-colored stripes. More importantly, it has two double-decker Green Cars (first class cars). The extra cost for sitting in the Green Cars was 570 yen between Shinjuku and Higashi Washinomiya stations.

The Tohoku main line in spring time is a pleasant route. 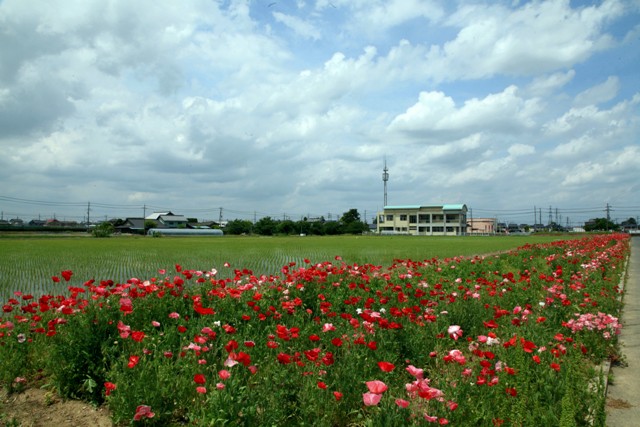 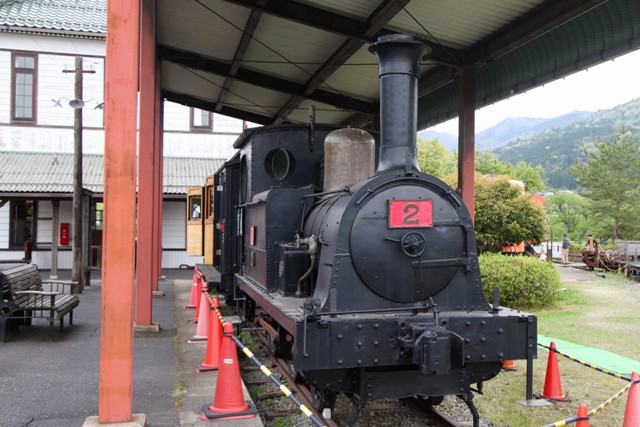 Kaya Railway was a small local private railway in Kyoto Prefecture. It was unfortunately abolished in 1985 due to a decreasing number of passengers, but part of the facility was retained as a museum named Kaya Steam Locomotive Square and is located in Yosano Town of Kyoto Prefecture, about 650 kilometers west of Tokyo.

The most precious exhibition in the museum is the number 2 steam locomotive (SL), which was built by Robert Stephenson & Company in 1873. As you know, Stephenson & Company was the first locomotive builder in the world, established in 1823. The original number of this SL was 12 of the Imperial Government Railway of Japan, but it was changed to number 123 of Class 120 in 1912. It was then renamed number 2 when Kaya Railway purchased this SL from Hikami Railway in Shimane Prefecture. Number 2 SL was operated until 1956 on the track.

On June 9th, 2005, number 2 SL was designated as a National Important Cultural Property. Along with Class 150 SL in the Railway Museum, it is one of Japan's oldest SLs imported from the UK. I hope that this precious SL will be maintained in good condition. 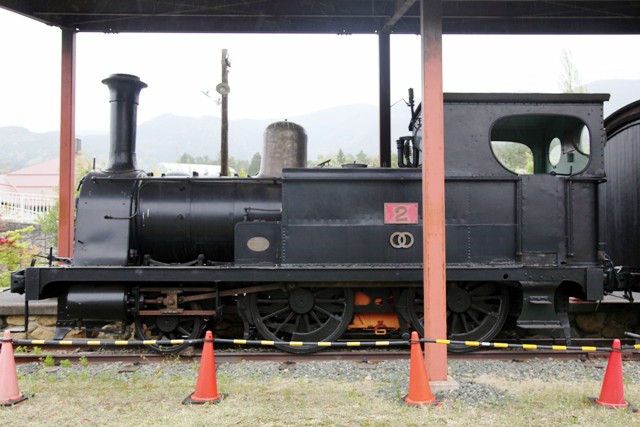 Side view of number 2 SL
Labels: Locomotive, Museum, Outside Tokyo 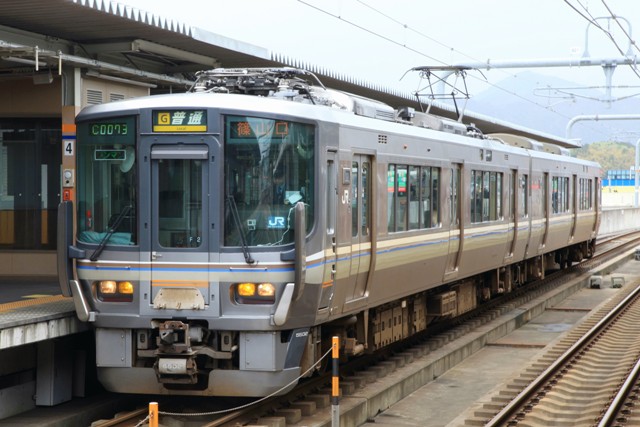 Fukuchiyama is an old city located in the northern part of Kyoto Prefecture, some 600km west of Tokyo. As of the year 2018, it has a population of 77,000. Fukuchiyama has grown as the castle city since the 16th century. We can see the beautiful castle tower in the center of the city. The present building was reconstructed in 1985, but keeps its medieval style. It is also known as a gorgeous city viewing spot among local people, as it was constructed at the summit of a small hill.

To get to Fukuchiyama castle, the nearest railway station is Fukuchiyama on the JR West and Kyoto Tango Railway lines. When I visited there, I came across the EMU JR West 223-5500 series on the JR West Fukuchiyama line. It is a 2-car train for operating without conductors. A total of 16 sets, 32 cars, were built by Kawasaki Heavy Industries and Kinki Sharyo in 2008. The 223-5500 series is composed of 2 cars... one motor car (KuMoHa 223-5500) and one trailer (KuHa 223-5500). The electric control system is IGBT-VVVF (variable frequency drive). You can see a special pantograph on the roof for deforesting the trolley wire. For distinguishing the 223-5500 series from the other groups of the 223 series, look at the gangway on the front of the train. The 223-5500 series only has an orange colored stripe on it.

It is fun for me to perceive the fine difference among the EMU 223 series trains as a trainspotter. 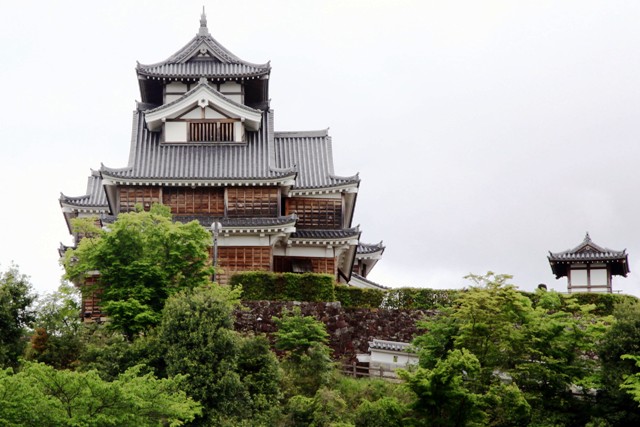 The northern part of Kyoto Prefecture is one of my favorite places. Different from the city of Kyoto, it is idyllically calm and peaceful.

Where is the recommended place to visit? My favorite spot is Hanare-ko (Lake Hanare) in Kyotango City. It is just a tiny lake surrounded by a residential area, but it is a nice place for strolling. Specifically, I like a small peninsula named Hanare-yama (Mt. Hanare) on the southern side of the lake. It is a natural mountain with an ancient mounded tomb at the summit. The full-blown cherries in spring are famous for local people.

To get to this cozy spot, the nearest railway station is Amino on the Kyoto Tango Railway. It takes about two hours from Kyoto by limited express trains, Hashidate, Konotori (stork) or Tango-relay. Usually, the DMU KTR8000 series is operated for Tango-relay, but the DMU KTR001 series was temporally commissioned when I visited there last month. It was lucky for nostalgic train lovers like me.

The DMU KTR001 series was launched in 1990. A total of 2 sets, 6 units, are built by Fuji Heavy Industries. Currently, one set (set number 2) is still operated on the track as a temporally replacement train. The KTR001 series is a high-decker train having beautiful "champagne gold" bodies. The maximum speed is 120 kilometers per hour. One set has 6 diesel engines. Although the scars are conspicuous on the bodies, the old express train still works on the track in Kyoto Prefecture. 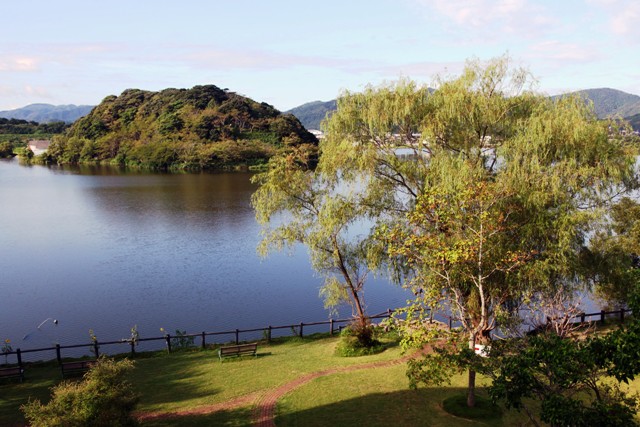 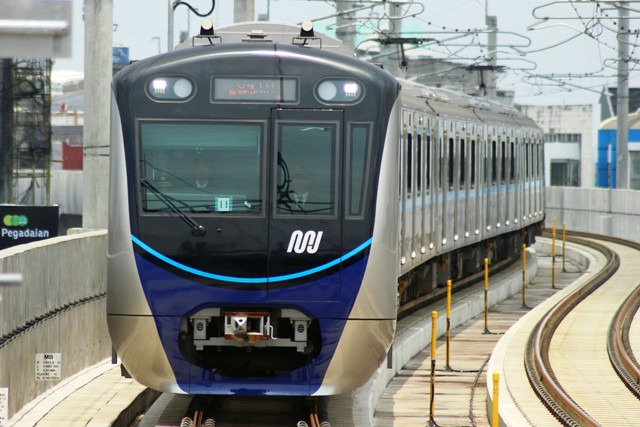 I have received news from an Indonesian rail fan. My thanks go to Faris Fadhli, who kindly sent me the recent photos.

The first photo: The first Indonesian subway line was opened in Jakarta on March 24th. It is the North-south line of Jakarta Mass Rapid Transit (MRTJ). Connecting Bundaran H.I. in the downtown area and Lebak Bulus in the southern suburb, the operating length is 15.5 kilometers. The track is double. The gauge size is 1,067 mm. The electric system is 1,500 V DC overhead. The train control system is CBCT provided by Nippon Signal. The rolling stock was imported from Japan. A total of 16 sets, 96 units, were built by Nippon Sharyo. The car numbers are K1 18 07 to K1 18 96 according to the Indonesian Railway Act. The electric control system of the trains is IGBT-VVVF (variable frequency drive).

The second photo: I am going to show you the current appearance of the 8618F of the EMU ex-Tokyu 8500 series. 8618F was operated on the Tokyu line in Japan from 1976 to 2008. After retirement from Tokyu, 8618F was then moved to Jakarta to spend its second life. It was a 10-car train in Japan, but it currently grew longer... 12 cars in Jakarta. The body stripes were also changed to red and yellow, which are the standard color of the local train operator, Kereta Commuter Indonesia. The second life is more busy than that of the Tokyu era. 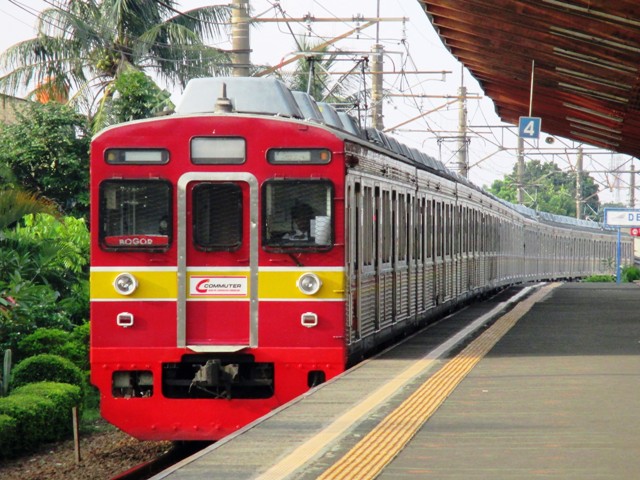 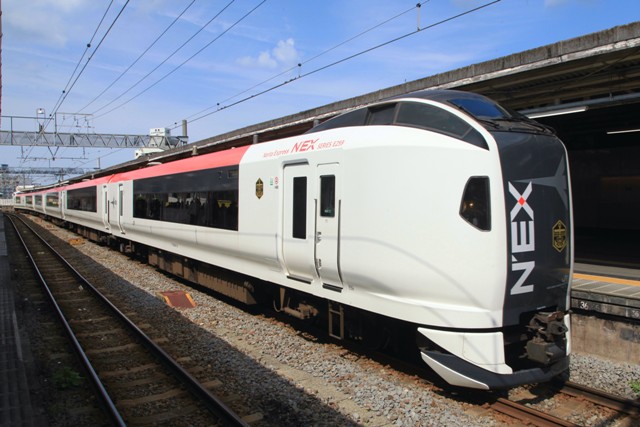 It is a spring sightseeing season in the Tokyo metropolitan area. We can see the beautiful seasonal blossoms here and there. They are fully blown in open fields, hills, public parks and private gardens.

I recently visited Komuroyama Park in Ito City, Shizuoka Prefecture with my family. Komuroyama is a small volcano and famous for its azalea blossoms. It was in peak blooming season and a flower festival was being held in the park. We saw that a traditional drumming team from a local high school was giving visitors a powerful performance. The park was filled with a rhythmic beat by the boys and girls.

To get to this spring paradise, the JR East Ito line and the connecting bus service was convenient. It took about 1 hour and 45 minutes from Tokyo to Ito by a limited express train. Most of the trains are directly operated onto the local private railway, the Izukyu line.

On my way back home, I came across JR East's limited express train, "Marine Express Odoriko", at Ito station. The EMU E259 series was commissioned for this train. As you may know, the E259 series is normally operated as an airport access train named "Narita Express" between the downtown Tokyo area and the New Tokyo International Airport (Narita Airport), but it is also operated between Tokyo and Izukyu-Shimoda via Ito in peak vacation seasons. You can see a special emblem for Marine Express Odoriko on the front of the train. 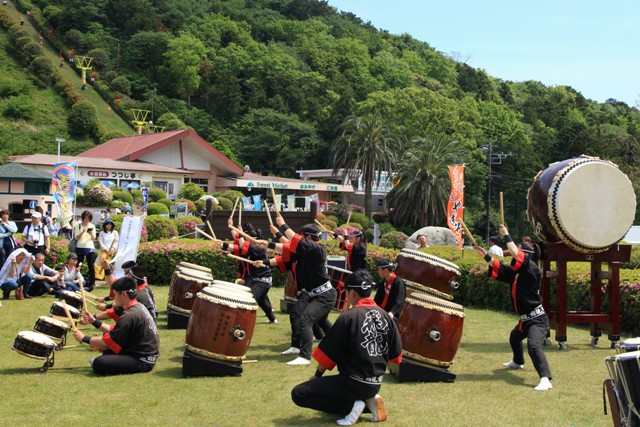 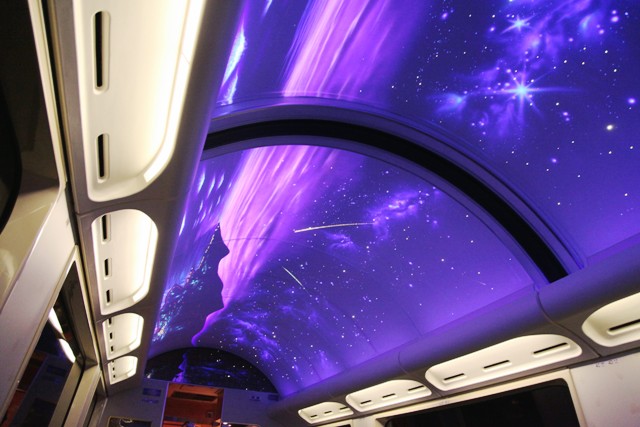 On January 25th, Izukyu issued a press statement announcing that Royal Box car of Izukyu Kurofune train will be operated from April 1st to June 30th in line with the Shizuoka Destination Campaign.

What is Kurofune train and Royal Box car? Kurofune train (set R-4 of the EMU Izukyu 2100 series) was created based on the image of Kurofune, which abruptly visited Japan led by US Commodore Perry in 1853 to demand the Tokugawa Shogunate to open the country to the world. Seeing that, the Japanese called them "Kurofune" (black ships). Accepting Perry's request, the Tokugawa Shogunate signed a treaty opening Shimoda Port to U.S. trade in 1854. As you noticed, Shimoda is the terminal of the Izukyu Line. Royal Box car is a special high-grade car (SaRo 2182) coupled to Kurofune train. It was once operated as a Green Car (the first-class car), but recently not coupled to Kurofune train due to its high maintenance cost.

During the period of the Shizuoka Destination Campaign, Royal Box car is specially coupled to Kurofune train. To my joy, Royal Box car requires no extra charge. It is good news for passengers. I recently enjoyed riding Royal Box car between JR East Atami and Izukyu-Shimoda stations. The unique service was its star-studded sky including meteoric showers on the ceiling. It was projected while the train passed through tunnels. It was very beautiful and wonderful memory for my travel.

Royal Box is the best entertainment car on the railways in the Tokyo metropolitan area. 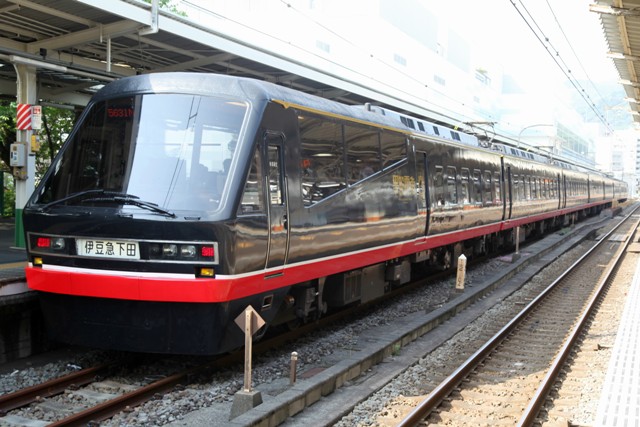 Access to the Scenic Spot in Kyoto Prefecture: Part 2 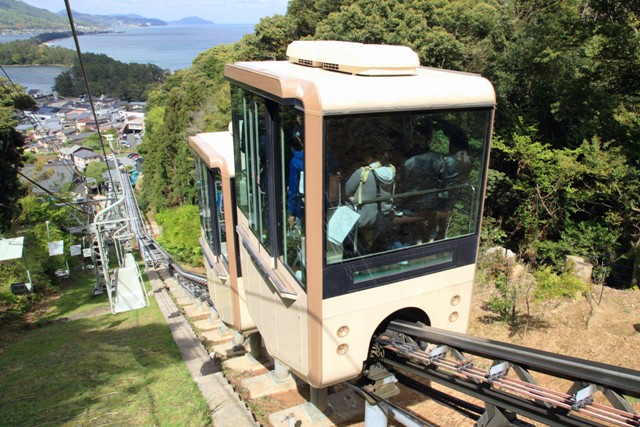 I recently visited Amanohashidate (the heavenly bridge) in Kyoto Prefecture for the first time in a year with my family. Amanohashidate is a 3.6-kilometer-long sandbar stretching along Miyazu Bay. The sandbar is lined with numerous beautiful pine trees. To admire the view of Amanohashidate, climbing up the hills on the both sides of the bay is recommended. Last year, we climbed up the hill on the northern side, so that this year, we headed to the hill on the southern side.

To climb up the hill on the southern side, Amonohashidate Monorail is convenient. To be exact, it is not a monorail, but a slope car. It is classified as an elevator under the Building Standards Act, not a monorail under the Railway Business Act. You can see similar transportation systems in Asukayama Park, Mt. Sarakura, Manna Country Club, Hakone Mountain and Minami-Yatsugatake Hana-no-mori Park.

This unique system was built by Kaho Monorail Company in 1999. Connecting Amanohashidate and Amanohashidate View Land stations, its route length is 393 meters. The maximum inclination of the route is 25 degrees. One of the features of this transportation system is its vehicle. It is a double vehicle to secure transportation capacity. Passenger capacity per vehicle is 20; therefore, a total of 40 persons can ride on each trip. The operating interval is 20 minutes. The speed of the vehicle is 55 meters per minute. The operation is driver-less using an electric motor with a rack-and-pinion driving system. 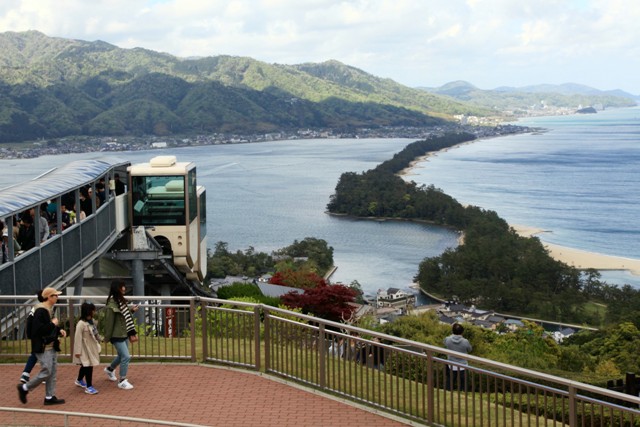