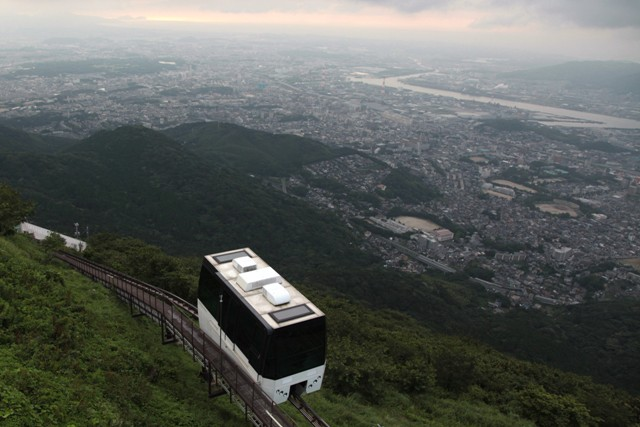 Following my last post, I am going to show you the access route to Mt. Sarakura in Kita-Kyushu City.

After getting off the funicular at Sanjo Station, I transferred to the Slope Car to get to the summit of the mountain. What is the Slope Car? It looks like a monorail or a funicular, but it is different from both of them. The Slope Car is a climbing vehicle that uses an electric motor with a rack-and-pinion driving system. You can see a similar transportation system in Asukayama Park in Tokyo and at a resort hotel on Hakone Mountain.

Connecting Sanjo Station on the Sarakurayama Cable Line to Tembodai (observatory) Station, its route length is 159 m. The maximum inclination of the route is 35 degrees. The operation interval is 20 to 30 minutes. It takes 3 minutes from Sanjo to Tembodai Station. The vehicle, which can accommodate 40 passengers, was built by Kaho Monorail Company in 2007. The operation is driver-less, but an attendant is on board.

The view from the summit was wonderful. I could see the large Yahata Steel Works in the city and Honshu Island (the mainland of Japan) across the Kanmon Straits. It was cool. It was a different world from the downtown area, where the maximum daytime temperature was higher than 30 degrees Celsius. I saw some people drinking beer at the summit, but they looked a bit cold. You should bring long-sleeved clothes, even in the summer, when you visit Mt. Sarakura. 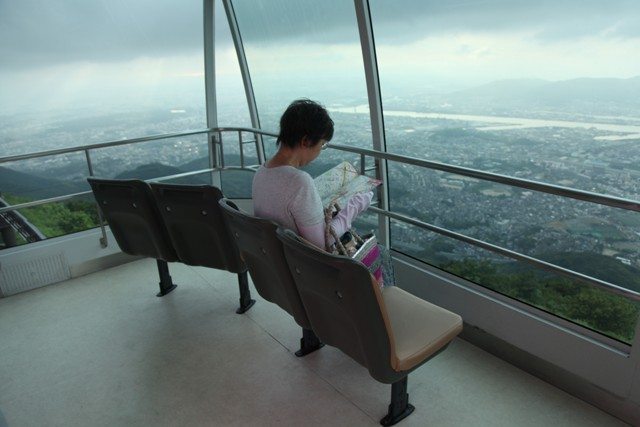