After the Cow Train, then the next post is the Tama Zoo Train.

Set 7801 of the EMU 7000 series is used for the 3rd generation Tama Zoo train the same as the 2nd generation one. It's a 4-car train built by Tokyu Sharyo in 1993. The 7000 series debuted in 1984 to enhance transportation capacity on the Keio line. 190 carriages in total were built by Nippon Sharyo and Tokyu Sharyo. A field chopper electric control system was originally adopted, but it was later changed to the VVVF (variable frequency drive) system with induction motors, as part of a renovation project. 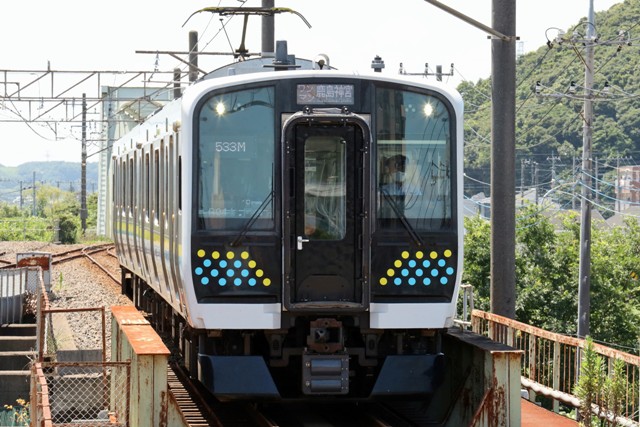 Set R04 of the EMU JR East E131 series arrives at Kashima-jingu station
On March 13th this year, JR East launched a new local train named the EMU E131 series in the Chiba area. The introduction of the newly developed local train in this area was for the first time, indeed, in 51 years. They are operated on the Uchibo, Sotobo, Narita and Kashima lines.
The purpose of the new model development is saving labor. The E131 series enabled a train operation without a conductor. A driver can observe passengers getting on and off in the cockpit. The track facilities maintenance device on the train is also useful. Thanks to the new device, the company doesn't need to secure a special time for fracture point detection on the tracks. 12 sets, 24 carriages in total, of the E131 series were built by J-TREC Niitsu Factory. I'm fond of its front design, which is black with yellow and light blue-colored dots.
JR East plans to launch the E131 series onto the Sagami line in the Kanagawa area as well this autumn. This new model will be also introduced onto the Utsunomiya and the Nikko lines in the Tochigi area by March, 2022. For the above purpose, 27 sets (12 sets of 4-car trains and 15 sets of 3-car trains) of the E131 series will be additionally built. As a result, the present model, namely the 209-2000 and the 209-2100 series, will disappear in the near future.
The E131 series will make a new era on the local lines in the eastern part of Japan. 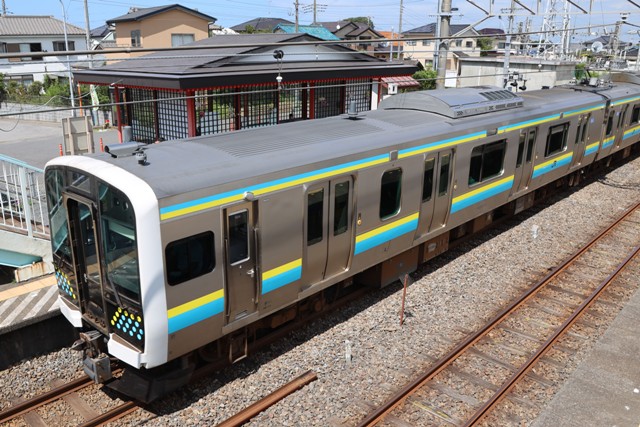 A Small Topic on the Tokyo Olympics and Paralympics 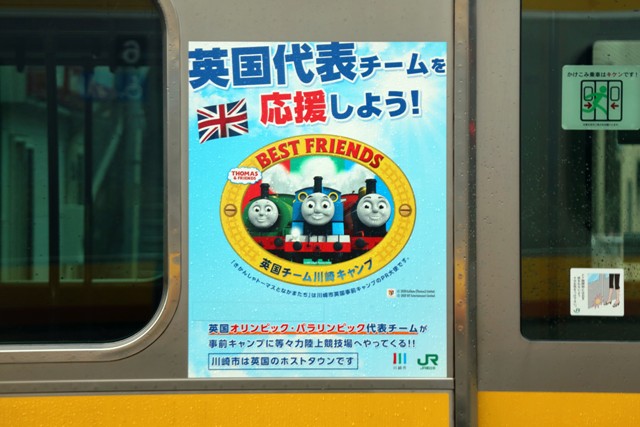 The 2020 Tokyo Olympics are over. It was held after one year's delay without spectators because of the COVID-19 calamity. My family had tickets but they were going to waste (with a refund). I changed my mood, and am going to show you a small topic on the Tokyo Olympics.

During the Olympics, many cities were registered as host towns in Japan. Host towns are a nationally-instituted designation given to cities who serve as the "base" for pre-training camps for countries and their athletes who will participate in the Tokyo 2020 Olympics and Paralympics. In addition to sports, host towns aim to promote a long-lasting cultural exchange between their municipality and their guest country that will extend beyond just the summer of 2020. For example, my hometown, Setagaya Ward of the Tokyo Metropolis is a host town of the U.S. team. The horse dressage competition was held in Setagaya Ward. The adjacent Suginami Ward is a host town of the Uzbekistan team and Meguro Ward is that of the Kenya team.

Kawasaki City in Kanagawa Prefecture is a host town of the British team. In commemoration of the host town registration and activities, Kawasaki City displays special stickers on the JR East Nambu line trains. You can see the Union Jack and "Thomas & Friends", which is a popular British TV series, on the stainless-steel bodies of the EMU E233-8000 series commuter trains. 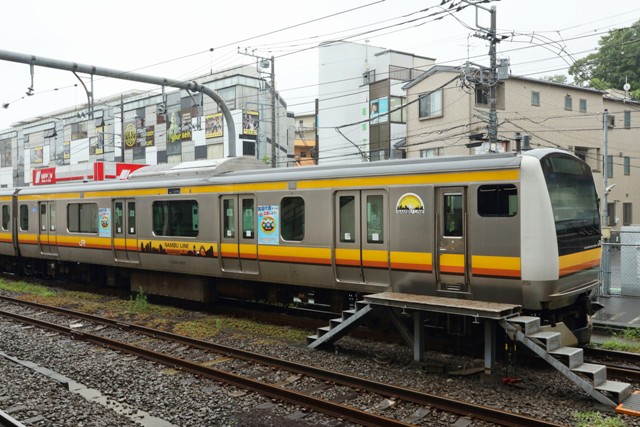 Cow Train on the Kodomonokuni Line 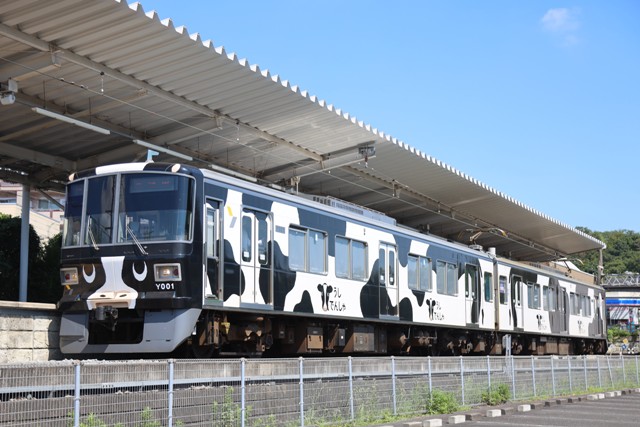 Set Y011 of the EMU Yokohama Minato Mirai Railway Y000 series, "Cow Train"
One year has passed since I introduced the Sheep Train on the Kodomonokuni line in this blog. Today, I'm going to show you another poster train being operated on the line.
On October 11th, 2018, Yokohama Minato Mirai Railway Company launched a special poster train named "Cow Train" on their Kodomonokuni line. The purpose of this poster train is to promote tourism to Kodomonokuni (the Children's Land), which is an amusement park located in Yokohama City, some 30 kilometers southwest of Tokyo. The company currently offers one set of their 2-car train, Y011F of the EMU Y000 series, for the second generation poster train. We can see images of cows both on the bodies and the interior of the trains. Each car depicts a cow in the outer design; meanwhile the pastures with cows are drawn in the interior. Needless to say, there are many cows in Kodomonokuni.
For your information, construction of Kodomonokuni started in 1959 in celebration of the marriage of the Crown Prince Akihito (present reigning emperor), and was completed in 1965 by a social welfare corporation, Kodomonokuni Association. Although Kodomonokuni was a popular spot among urban families, there was a big issue... public transportation to get there. Kodomonokuni Association, then, constructed an access railway, the Kodomonokuni line in 1967. It's a short (3.4 kilometers) single track railway connecting Kodomonokuni and Nagatsuta on the Tokyu Den-en-toshi and the JR East Yokohama lines. I was a frequent user of the Kodomonokuni line, when I was a kid.
Labels: SME, Tokyu

New Model on the Oarai-Kashima Line 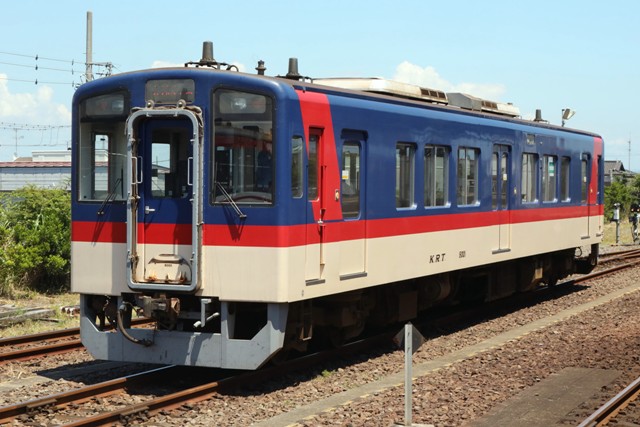 On March 26th 2016, the company launched a new diesel railcar named 8000 series. The introduction of a new model was for the first time in 31 years on the Oarai-Kashima line. The purpose of this new model was to replace the decrepit model, 6000 series. Six carriages in total were built by Niigata Transys from 2016 to 2020.

With regard to the technical specifications, the 8000 series has a 20 meter-long steel body and a diesel engine, which was manufactured by IHI Power Systems, with a 330 PS / 2000 rpm output. The transmission system is hydraulic. The 8000 series is often operated with two cars, but can't be coupled with the 6000 series. It's because the 8000 series has an electric command pneumatic brake. In other words, these two models have different braking systems.

As you may know, the old 6000 series has cross seats and four passenger doors per carriage. It's comfortable for tourists. Different from the 6000 series, the new 8000 series has six passenger doors per carriage and only long seats. It might be good for local commuters and high school students for smooth getting on and off, but a bit boring for a tourist like me to be honest. To get a taste of what a holiday feels like, I prefer the 6000 series to the 8000 series. Sorry, this is entirely just my own personal opinion. 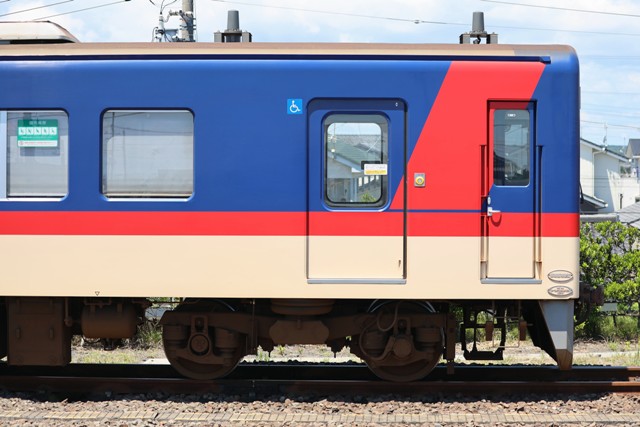 The 35th Anniversary of the Oarai-Kashima Line 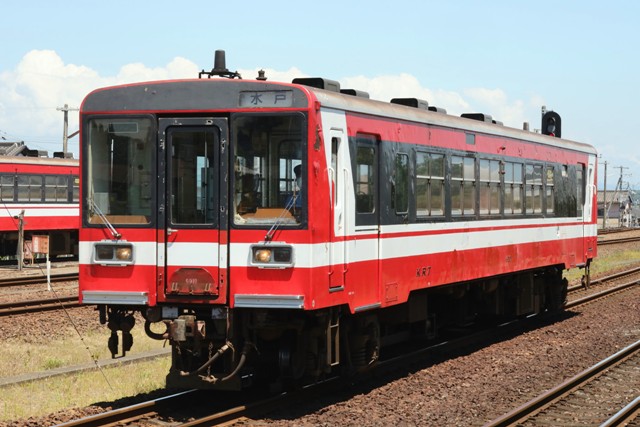 I recently visited Kashima Rinkai Railway for the first time in five years. What's new with this local railway in Ibaraki Prefecture?

The main fleet for passenger transportation is the 20 meters-long diesel railcar, 6000 series, launched in 1985. 19 carriages in total were built by Nippon Sharyo and Niigata Tekko from 1985 to 1993. Eleven carriages are still operated on the line. It has a 230PS/1,900rpm with a liquid transmission. The maximum speed is 95 kilometers per hour. It can accommodate up to 120 passengers. The red colored body with a white colored stripe is the symbol of this railway company. The 6000 series has four doors and semi-cross seats. 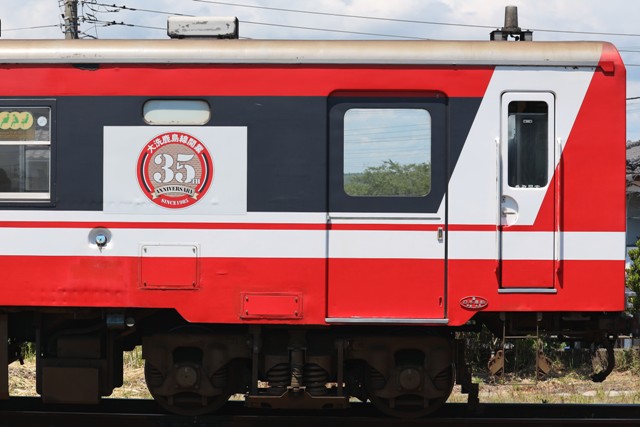 The 35th Anniversary poster of the Oarai-Kashima line
Labels: SME 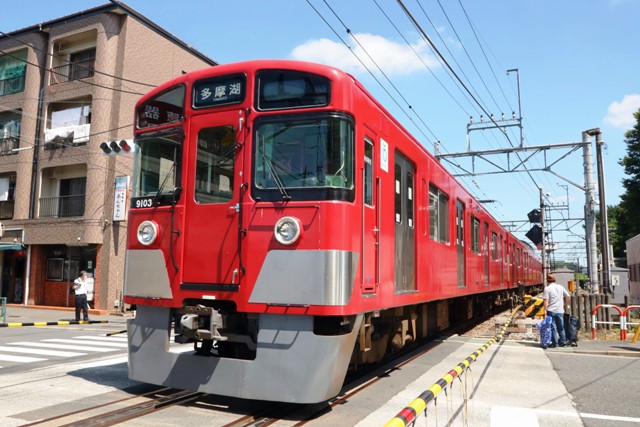 The Japan Meteorological Agency made an announcement that this year's rainy season ended on July 16th in Tokyo. The mid-summer has begun. Under the strong sunlight, I visited a local farm in Kodaira City of Tokyo Metropolis with my family. My purpose of the visit was for blueberry picking. My eyes have lately been very tired. I heard that blueberries are good for the eyes, so, blueberry picking would improve my health. We could pick many blueberries there.

On my way back home, we took the Seibu-Tamako line. I came across a rare train, set 9103 of the EMU 9000 series at Omekaido station. The 9000 series was launched in 1993 reusing the old equipment of the retired 101 series. 80 cars in total were built by the Seibu Tokorozawa Factory. Set 9103 was once known as the Lucky Red Train on the Seibu-Ikebukuro line. That was the exchange of color designs and a mark of friendship between Seibu Railway and Keikyu Electric Railway. The Lucky Red Train was then cut short from a 10-car to a 4-car train this year, and moved to the Tamako line. The body color was slightly changed from red to dark red, like a tomato. The new red color is my favorite and I'm fond of this tomato-colored train.

Finally, I found another red-colored monument in Kodaira City. It was Japan's tallest barrel-type mailbox constructed by Japan Post Company to promote postal services. This mailbox is actually used by people. Kodaira is the blue and red-colored city, isn't it? 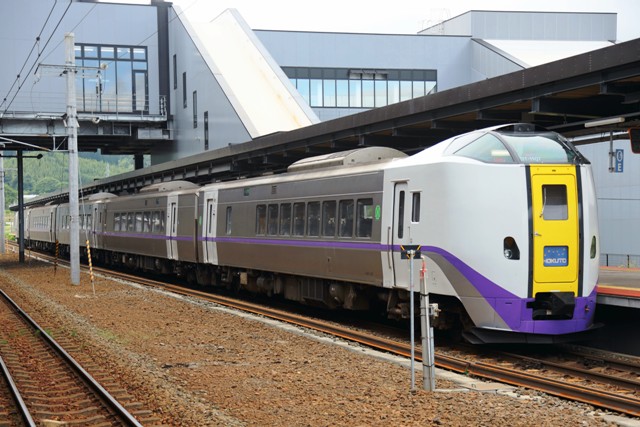 Our special holidays ended all too soon. After four days of our traveling on Hokkaido Island, we had to start homeward. On our way back home, we used JR Hokkaido's limited express train "Hokuto" on the Hakodate main line.

The train name "Hokuto" comes from the Big Dipper. As you know, the Big Dipper is a constellation pointing to the polar star. By extension, Hokuto is a representative train in the northern part of Japan. In fact, Hokuto is operated between Hakodate and Sapporo. They are major cities in Hokkaido, which is the northernmost island of Japan. When we visited Hokkaido Island in 2013, the DMU KiHa 281 series was commissioned as Hokuto. This time, not only the 281 series, but also a new model, the DMU KiHa 261-1000 series, was operated as Hokuto. The 261-1000 series was launched in 2006. It was then introduced onto the Hakodate main line as the limited express Hokuto in 2016. JR Hokkaido plans that all the Hokuto limited express trains will be operated by the 261-1000 series by March, 2023. 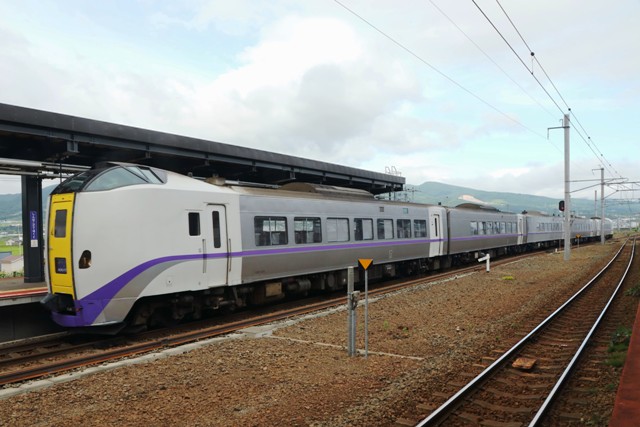