Archaeopteryx Train on the Keisei Line This is quite sudden, but have you heard of Archaeopteryx? It's an ancient animal of 150 million years ago. The first Archaeopteryx fossil was found in Germany. Seven fossil skeletons have been discovered so far. They look like birds, but also have characteristics of dinosaurs. Archaeopteryx might be an animal in the intermediate stage of evolution from dinosaurs to birds.

The same is true of trains. Please look at the top photo. It's set 3828 (hereafter 3828F) of the EMU Keisei 3700 series. 3828F has stainless-steel bodies with beads on the side surfaces. A gangway and a train type display are located in the center left of the front. They're the same as the standard sets of the 3700 series. On the other hand, the positions of two front lights are upper left and right. Tail lights and express lights are wider and longitudinally arranged on the front. They're different from the standard sets of the 3700 series. They're more like the younger model, namely the 3000 series. In conclusion, 3828F seems a train in the intermediate stage of evolution from the standard 3700 series to the newer 3000 series.

3828F was built in 2000 as the 6th batch of the 3700 series. The newer model, namely the 3000 series, was developed in 2002, just after the manufacturing of 3828F. The design of the new model was inherited from the 6th batch trains of the 3700 series including 3828F. As a trainspotter, it's fun for me to perceive fine differences between trains. 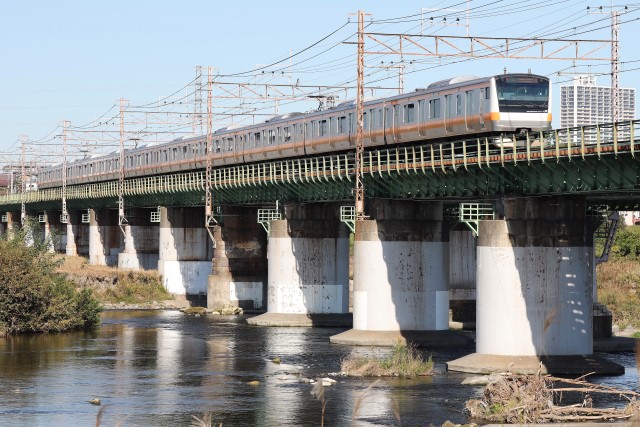 Let me continue from where I left off my post on November 10th. After watching the "animal parade" on the Tama Monorail line, I continued walking along Tama River towards upstream. The next railway track was Tamagawa Bridge on the JR East Chuo line.

Tamagawa Bridge was completed in 1889 by ex-Kohbu Railway. It was originally a single track, but, became a double track when a westbound track was added in 1937. The length of the bridge is 444 meters. The most notable point of this bridge is that locally made bricks were used for piers. They were manufactured by Hino Renga Company. This local company was established in 1887, and produced a total of 500,000 bricks in two and a half years. 200,000 of those were used for Tamagawa Bridge. Hino Renga Company unfortunately went out of business in 1891 due to the death of the president. It was a story during the early stages of Japanese modern industries after nearly 700 years of feudal times.

We can still see some brick piers under the eastbound track. They remain original features. I saw that commuter, freight and limited express trains crossed the river one after another. They were the EMU E233 series, the E353 series, electric locomotive Class EH200 and Class TaKi1000 oil tank cars. The locally made bricks from 133 years ago still support the mass transportation of the Tokyo metropolitan area.

Enjoying the riverside walking and studying the local history, I spent a great weekend again. 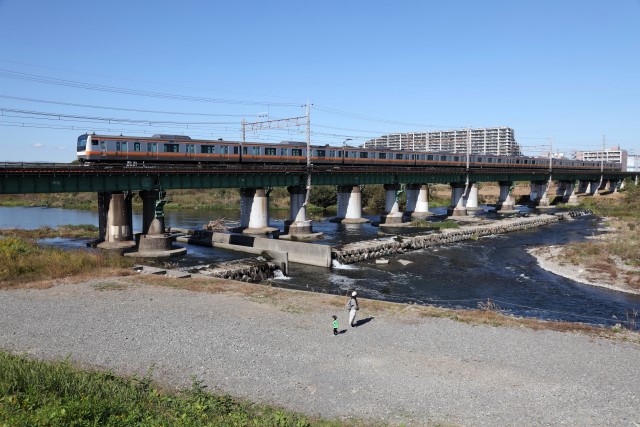 The Christmas Lights on the Haneda Airport Line 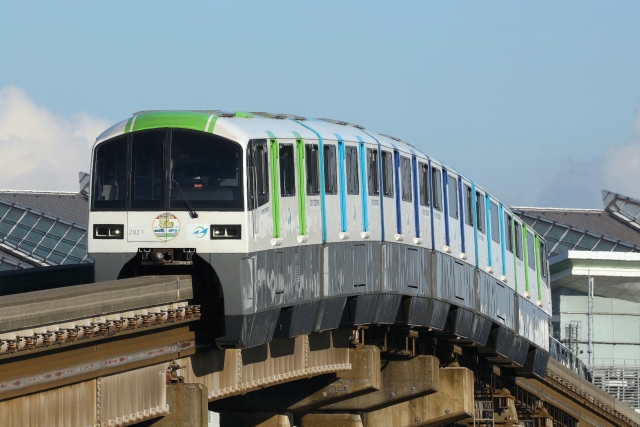 Somehow, I recently often take monorail lines. Following the Tama Monorail line and the Disney Resort line, I'm going to show you what's been happening on the Haneda Airport line this time.

Let me quickly review the Haneda Airport line to start. It's the second oldest monorail line in Tokyo. The route was inaugurated in 1964 as an airport access line from downtown Tokyo to Tokyo International Airport (Haneda). Connecting Hamamatsucho and Haneda Airport Terminal 2, its operating length is 17.8 kilometers. The entire route is a double track. The electric system is 750V DC with rigid conductor lines. The fastest "Haneda Express" train connects Hamamatsucho and Haneda Airport International Terminal (Terminal 3) without stopping in 13 minutes.

Taking the Haneda Airport line, I visited Ohi Racecourse. Am I a gambler? No, I visited there not for betting on horses but for seeing the illuminations (Christmas lights) with my family. This year's illumination season has just started in Japan. Urban streets are nicely decorated with millions of LED lights. Recently, illuminations are more than just street events. Many shopping malls and amusement parks also hold illumination events to attract holiday makers. Racecourses are no exception. My best scene was a simulated rice field. It was an artistic and beautifully lit up scene backed by the real moon.

Finally, I'm showing the recent picture of the EMU 2000 series on the Haneda Airport line. Please look at the top photo. In commemoration of the 25 years' operation, the 2000 series has a special sticker on the front of the train. 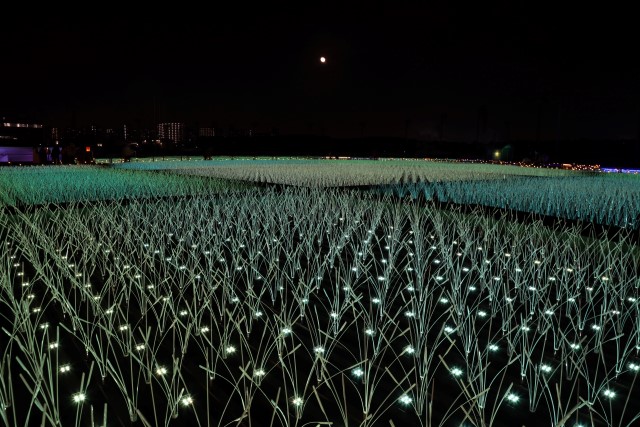 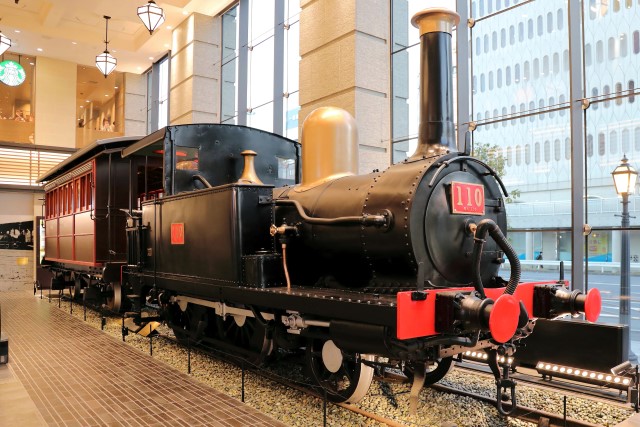 I recently visited Kyuyoko Gallery near Sakuragicho station in Yokohama City. Japan's first railway was inaugurated on October 14th in 1872 between Shimbashi and Yokohama stations. Yokohama station at that time was located at the present Sakuragicho station on the JR East Keihin-Tohoku line. Kyuyoko gallery is a narrow space in a shopping mall, but anyone can observe precious railway heritages for free. The most important exhibition is a steam locomotive (SL) unit 10 of the Class 110. The Class 110 is one of Japan's first SLs imported from the UK in 1871. It's a 2-4-0 (Whyte notation) type tank locomotive built by Meadow Hall Works of Yorkshire Engine Company. After operating for 52 years, it was retired from the track in 1924. A large steam dome on the central part of the boiler catches visitors' eyes.

Another important exhibition is a second-class passenger car, which was originally built in the UK. Even though the exhibition is a replica, visitors can easily imagine the early time of railway travels. Its classical wooden shutters on the windows are nostalgic. The interior lighting equipment is also elegant as it's provided with oil-lamps. I found oil supply ports of the lamps on the roof. They're like ventilators.

I'm sure passengers at that time had a great time on the train. 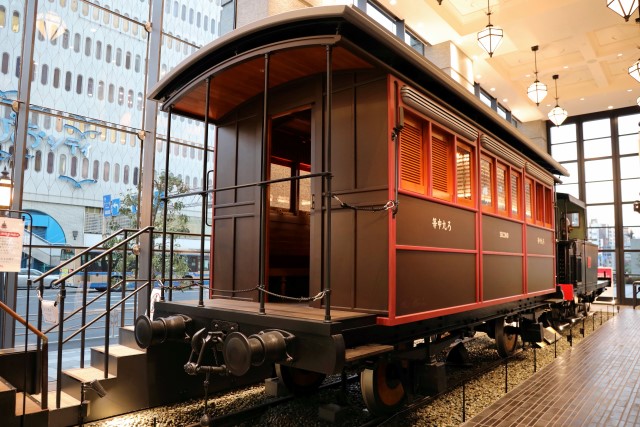 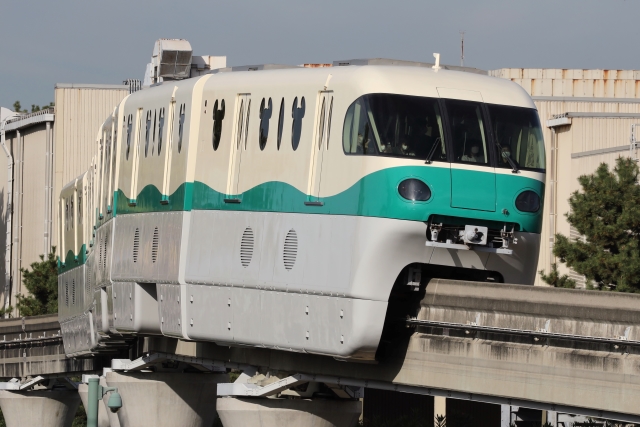 I recently visited the Disney Resort line in Tokyo Disney Resort for the first time in a year. What's new with this monorail line in the dream and magic kingdom?

Let's quickly review the Disney Resort line to start. It's a straddle-beam monorail route opened in 2001 by Maihama Resort Line Company. The route is a looped single track running through amusement facilities, hotels and JR East Maihama station. There're four stations over the total operating length of 5.0 kilometers. 6-car trains run counterclockwise throughout the day. Using ATO (automatic train operation) system, a train is operated without a driver; meanwhile, a conductor is on board for door operations and guide announcements to passengers.

Let's head to the main topic. I found that most of the old trains, namely EMU 10 series (Type X), had already been replaced by a new model named the EMU 100 series (Type C). The Type X was commissioned in 2001. Five sets in total were built by Hitachi. Each set has a different body color, namely blue, yellow, peach, purple and green. Only the purple (set 3) and the green (set 4) still survive. The company announced that the set 3 will be operated at least by March 2023. On the other hand, some rail-fans are spreading a rumor that the set 4 will be retired on Micky Mouse's birthday, I mean November 18th. I'm fond of the Type X, because it has corner sofa-type seats where I can relax.

Anyway, I quietly await his birthday.