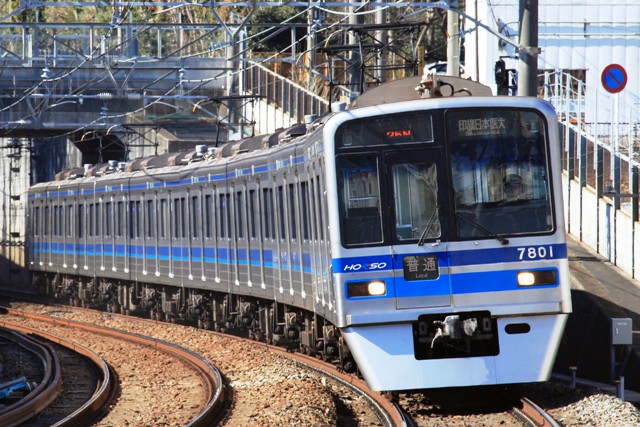 I completely thought that I had already introduced all of the trains in the Tokyo metropolitan area in this blog but there are still some left. Today, I am going to show you one of those models.

The EMU Hokuso 7800 series is one of the main fleet on Hokuso Railway. It was originally launched in 1991 as Keisei's commuter train named the 3700 series. A total of 132 units were built by Nippon Sharyo and Tokyu Sharyo. In 2003, 3 sets, 24 units, of the 3700 series were moved from Keisei Electric Railway to Hokuso Railway according to the leasing contract. It was, then, renamed as the Hokuso 7800 series. The body stripes were also changed from red and blue to dark blue and light blue. Hokuso also has the same type of trains named the 7300 series, but the 7300 series is Hokuso's own rolling stock. In other words, the Hokuso 7800, 7300 and Keisei 3700 series are sister trains, which have same technical specifications.

Incidentally, Hokuso is a local railway company in Chiba Prefecture. It was established in 1972 for the carriage of the Chiba Newtown residents. The route extends to the western part of Chiba Prefecture including Chiba Newtown. Connecting Keisei-Takasago and Imba-Nihonidai stations, its route length is 32.1 kilometers. The track is double and electrified. The gauge size is 1,435 millimeters. The electric system is 1,500 V overhead. Hokuso trains are directly operated onto the Keisei, Toei-Asakusa and Keikyu lines. 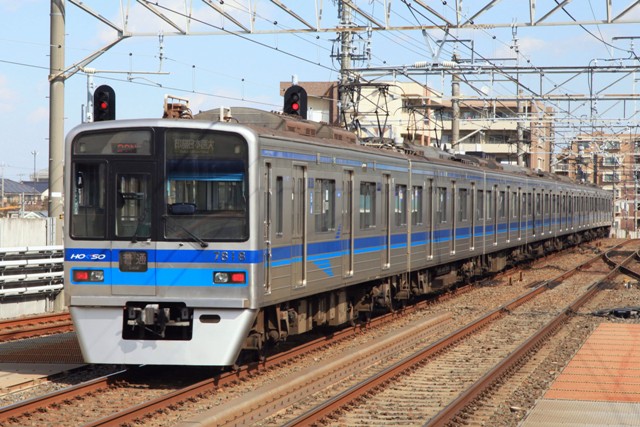 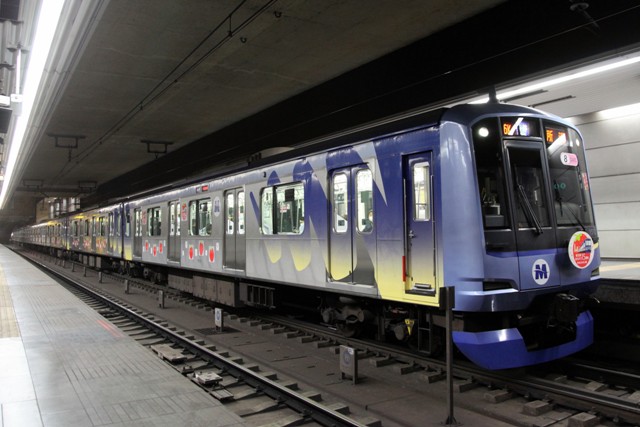 Just one week before the sakura (cherry blossoms) season, I visited Yokohama City to look for a herald of spring. My destination was Yamashita Park in the downtown area.

It was a sunny and warm weekend. I saw many families and couples in the park. They were chatting, napping, eating lunch and so on. The park offered them a refreshing place and a relaxing time. I also found a large vessel lying alongside the pier. It was Asuka II, Japan's largest cruise ship. Asuka II was built by the Mitsubishi Heavy Industries in 1990 under the name of Crystal Harmony. In 2006, it was transferred to Nippon Yusen Kaisha and her name was changed to Asuka II. Currently, her port of registry is Yokohama. She has a length of 241 meters, a breadth of 29.6 meters, and a maximum speed of 21 knots.

On the way back home, I came across a special poster train on the subway Minatomirai Line of Yokohama Minatomirai Railway. It was set Y502 of the EMU Y500 series celebrating the 15th anniversary of Yokohama Minatomirai Railway. Set Y502 was decorated with strawberry stickers and plates. Why Strawberry? It is just a Japanese pun. Strawberry is called ichi-go in Japanese. Ichi means one and go means five. One five is fifteen. That's it, no more. For your information, the Y500 series is a sister train of the EMU Tokyu 5000 series. A total of 6 sets, 48 units, were built by Tokyu Sharyo. 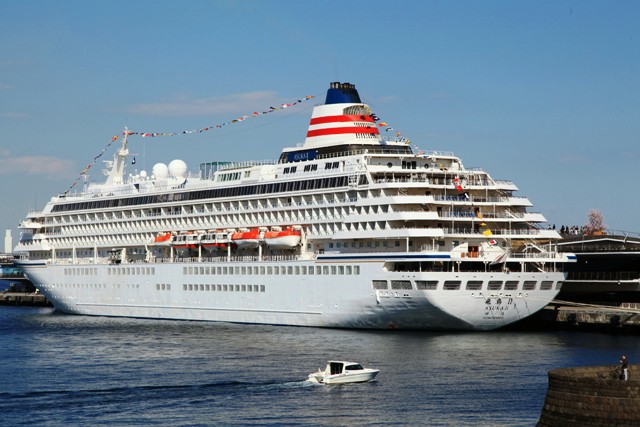 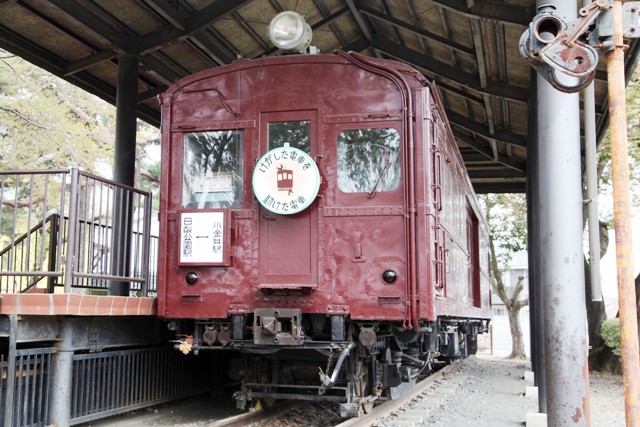 Shimotsuke is a small city located in the southern part of Tochigi Prefecture. It is a new city established in 2006 after merging three small towns. I recently visited Shimotsuke City for a stroll with my family.

The greatest discovery was an electric car exhibited in Nissan Park near Koganei station on the Tohoku main line. It was KuMoE 21001 of the Class KuMoE 21. KuMoE 21001 was built by Nippon Sharyo in 1927 as a commuter electric car named DeHa 73284. After being operated on the Senseki line in Miyagi Prefecture, it was modified to a relief car, and renamed as KuMoE 21001 in 1963 by Morioka Factory of Japanese National Railways. Eventually, it was retired from the track in 1986, and moved to Nissan Park for exhibition. KuMoE 21001 has a length of 17 meters, a breadth of 2.87 meters, a weight of 44.7 tons and a maximum speed of 95 kilometers per hour. It was dispatched for relief when the railway accidents happened. For that purpose, it had a jib crane to lift tools up and down.

I was attracted by this old electric car. The body was square and sturdy. The large rounded frontal light was my favorite. The wide central doors were classic and striking. Its boggies (type DT10) were nostalgic and the resister was large. That's certainly the electric car in the 1920s.

I hope that this precious electric car will be maintained in good condition. 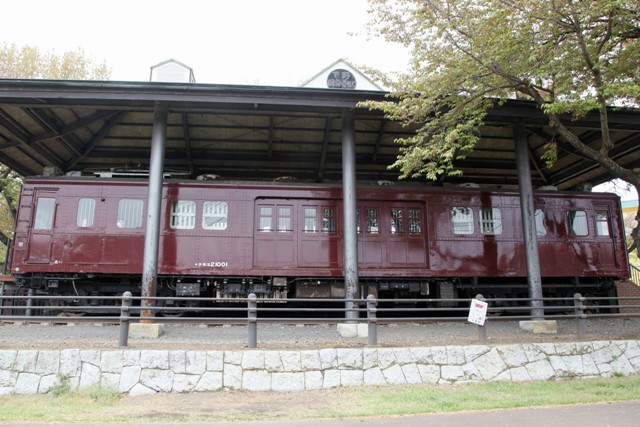 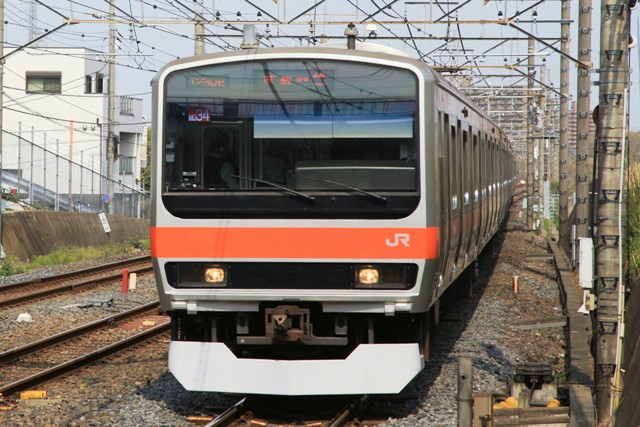 Subsequent to Tokyo Metropolis, I am going to continue to show you this year's sakura (cherry blossoms) in Saitama City.

On March 25th, the Meteorological Agency of Japan declared that sakura (cherry) blossoms had started blooming in Saitama City. It was four days later than Tokyo Metropolis, and three days earlier than last year. I visited Cherry Promenade in the Minuma area of Saitama City with my family. Cherry Promenade is a 20 kilometer-long foot path with numerous cherry trees. When we visited there, it was fine weather and all the cherry trees were in full bloom. It was this year's best day to admire the cherry blossoms in Saitama City. My favorite spot was a "cherry tunnel", where cherry branches were arcuate and looked like a tunnel. It was very unique and beautiful.

On the way back home, I enjoyed taking train photos at Higashi-Urawa station on the Musashino line. My target was the EMU 231 series, which was transferred from the Sobu line last year in accordance with JR East's relocation plan of their rolling stock. It was an 8-car train consisting of 4 motorcars and 4 trailers (4M4T). The bodies are stainless-steel made with orange, brown and white-colored stripes. The E231 series was once a very rare train on the Musashino line, but it has become a major fleet. A total of 8 sets, 64 cars, are currently operated on the line.

The Musashino line is significantly changing. 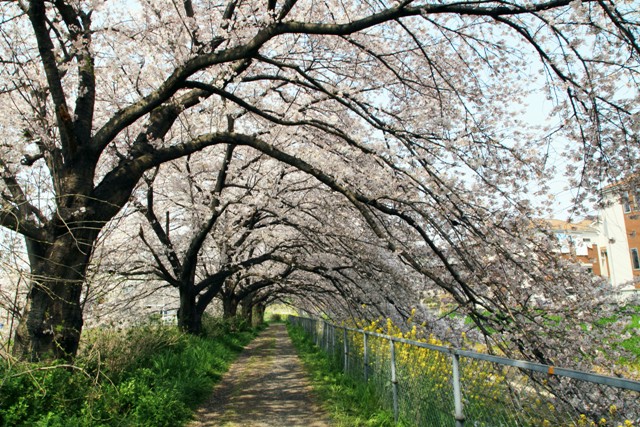 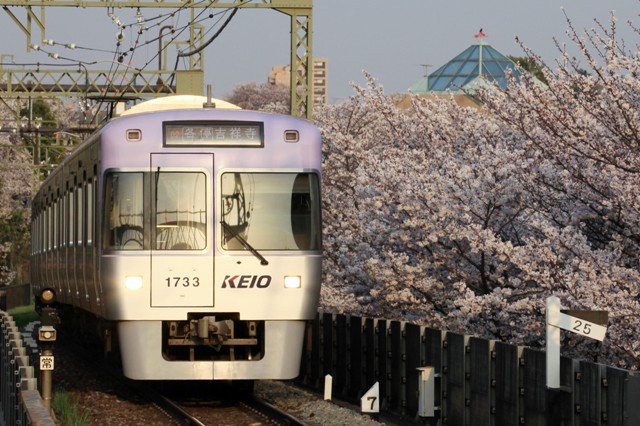 Subsequent to Yokohama City, I am going to show you sakura (cherry blossoms) in Tokyo Metropolis this year.

On March 21st, the Meteorological Agency of Japan declared that the sakura (cherry) blossoms had started blooming in Tokyo. It was four days later than last year, and two days earlier than most years. As I post year after year, Japanese people harbor romantic emotions towards sakura blossoms. We are also reminded of the emptiness of life, seeing the beautiful blossoms dropping only a week after they fully blossom. This season is precious for us. Sakura viewing is a part of Japanese culture; famous sakura spots are crowded with admirers.

This year, I visited Takaido on the Keio-Inokashira line, the same as last year, since there are beautiful sakura trees on the bank of the Kanda River and along the track of the Keio-Inokashira Line. It is also a place filled with memories for me because I went to a kindergarten in Takaido when I was a kid. We kindergarten pupils often walked along the stream and the track with our teacher to see the fully bloomed sakura trees and the rattling trains.

I was able to take many train photos backed by full blown sakura trees from the platform of Takaido station. They were the EMU 1000 series with somei-yoshino cherries. They were very beautiful. I saw many rail-fans and photo lovers there. The only problem was the angle of the sunlight because it was close to sunset. I am going to show you two passable photos. 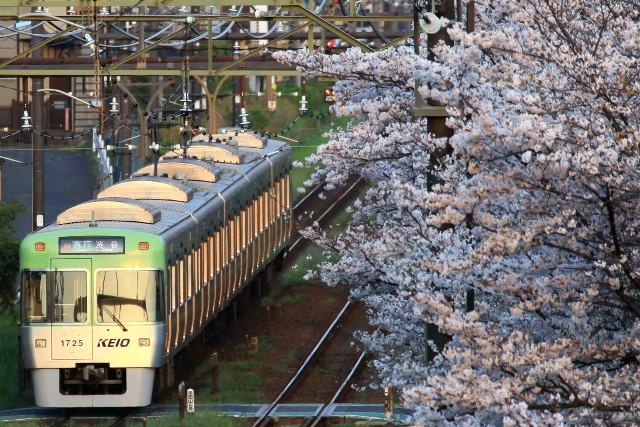 1725F of the EMU Keio 1000 series travels on the Inokashira line
Labels: Keio 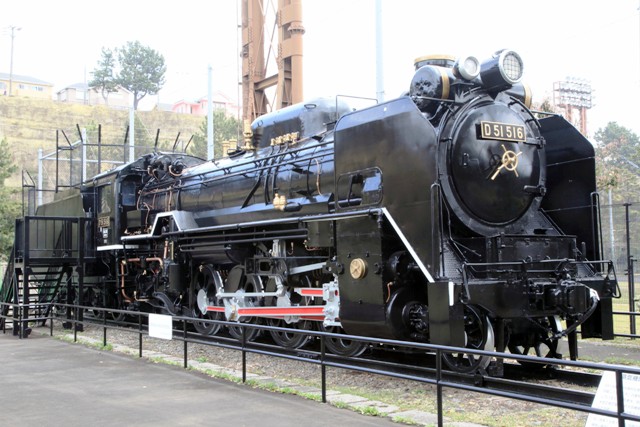 Sakura (cherry blossoms) season has come in the Tokyo metropolitan area again. We can see beautiful faint pink blossoms here and there. People are feeling the herald of spring. With so many cherry blossom viewing spots available, it's hard to select which one is the best. After wavering, I headed to Yokohama City in Kanagawa Prefecture with my family.

Our destination was Sankei-en, which is a traditional Japanese-style garden in the city. It was opened by a silk trader, Sankei Hara, in 1906. Although it was badly damaged during WWII, the garden was perfectly restored after it was donated to the City of Yokohama in 1953. I saw many visitors admiring full-blown cherry blossoms in the garden. 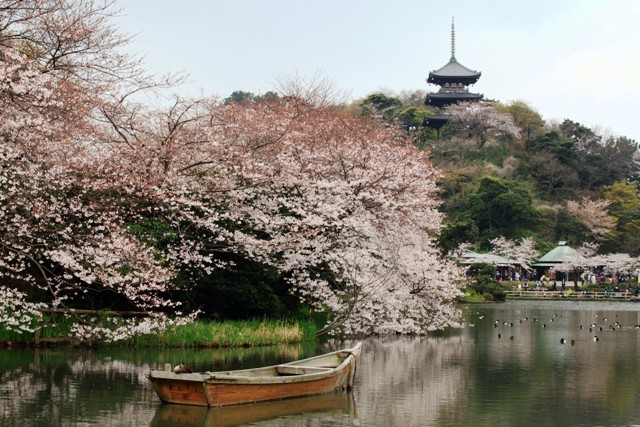 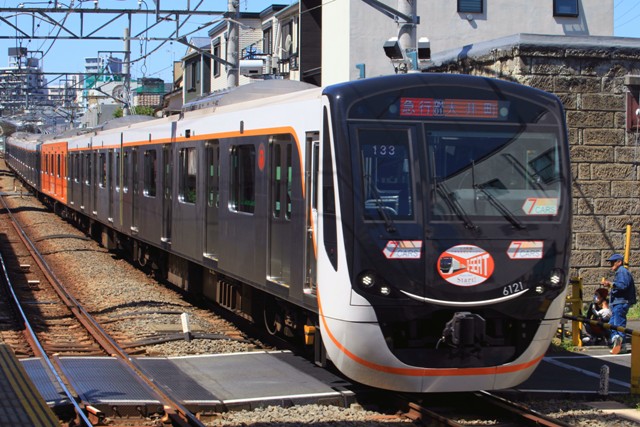 Following the EMU 2020 series, I am going to show you another new model on the Tokyu lines.

The vehicle traveling system of the 6020 series is almost the same as that of the 2020 series. For example, it has a full SiC-MOFSET variable frequency drive electric control system. One control device controls four induction motors. Different from the 2020 series, the 6020 series is a 7-car train including 4 motor cars. A total of 2 sets, 14 cars, were built by J-TREC and operated on the line.

By the way, car number 3 of the 6020 series is called "Q SEAT" car. What is Q Seat? It is a reserved seat car the same as the Keio Liner. It has multi-purpose seats, which the conductor can change from long seats to cross seats using a remote control system. The cross seat mode is applied when it is operated as a reserved seat car at night. The number of cross seat mode train operations is 5 on a weekday. The fee for a seat reservation is 400 yen. 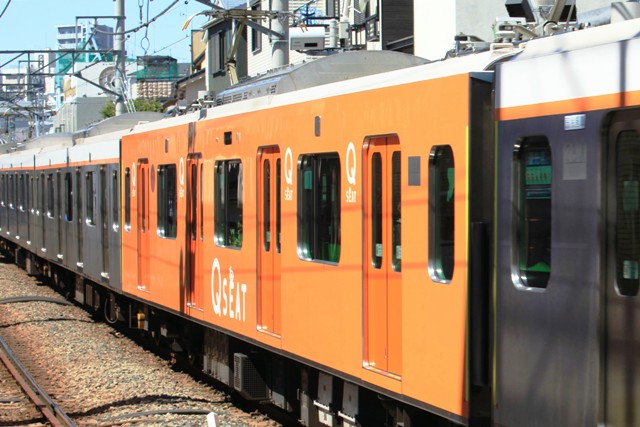 New Timetable on the Keio Line 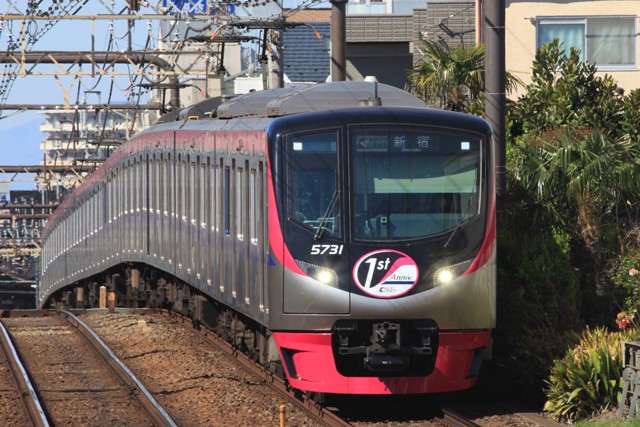 On February 26th, Keio Electric Railway Company changed their timetable for the first time in a year. What was new with this commuter railway?

Keio increased the operation number of Keio Liner, which is the reserved seat train on their Keio and Sagamihara Line. Keio Liner debuted last year as Keio's first reserved seat train. The number of operations was 5 for Keio-Hachioji and another 5 for Hashimoto every day. They were all westbound trains operated at night. This time, Keio has started operation of an eastbound Keio Liner as well. The total number of operations increased from 10 to 14 on a weekday. It is convenient for long distance commuters, who live in the western suburb of Tokyo to secure their seats. The fee for a seat reservation is 400 yen.

Keio Liner has a similar concept with those of Keikyu Wing, Tobu TJ Liner, Seibu S-train and JR East's so-called Commuter Liner. The train model for Keio Liner is the EMU 5000 series launched in 2017. A total of five sets, 50 cars, were built by J-TREC. This model has multi-purpose seats, which the conductor can change from long seats to cross seats using a remote control system. The cross seat mode is applied when it is operated as Keio Liner train.

In commemoration of the new timetable, Keio displays a special plate on the front of 8712F of the EMU 8000 series. It is informative for passengers on the Keio lines. 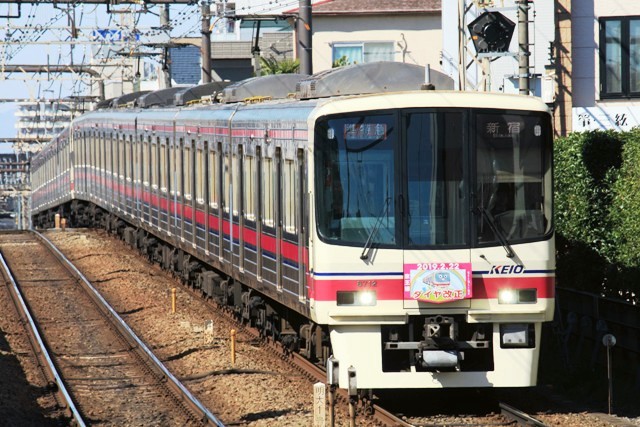 In commemoration of the new timetable, Keio displays a special plate on the front of 8712F