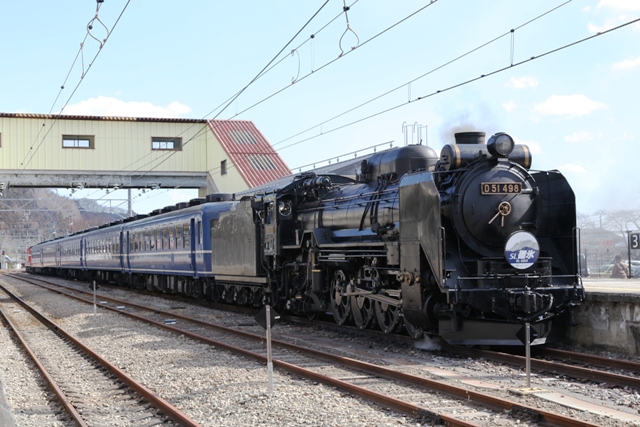 Are steam locomotives (SLs) still operated in your country?

In Japan, yes, they are, but not regularly. Several railway companies have SLs for operating special trains, such as the promotion of sightseeing spots or festivals on the lines.

In Gunma Prefecture, which is located north of Tokyo, JR East operates special SL trains. One of the famous routes is the Shinetsu Main Line in the western part of the prefecture. This area has some famous sightseeing spots and superb hot springs. Last weekend, I took a special SL train, "SL Usui" from Takasaki Station, and visited Usui Pass area (see the top photo).

"SL Usui" is composed of steam locomotive, D51 498, and five passenger cars. D51 498 was manufactured in 1940 at Takatori Works of the Department of Railways. It was retired in 1972; however, it came back into operation in 1988 for pulling special trains on the JR East lines. The body is beautiful shiny black, and the piercing whistle doesn't seem old at all.

After one hour of traveling, "SL Usui" arrived at Yokokawa Terminal. Then, I visited a heritage railway bridge, "Megane-bashi (Glasses Bridge)" by foot (see the bottom photo). Megane-bashi was constructed in 1893 as a railway bridge. It is made of brick, and appointed as a national important cultural property in 1993. A British engineer, Charles Assheton Whately Pownall designed it with Seiichi Furukawa. I got lost in the graceful view of the bridge.

I enjoyed the weekend being surrounded by the out of the ordinary. 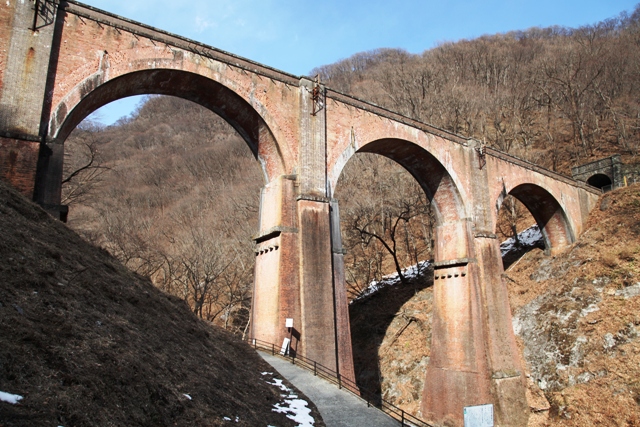 "Glasses Bridge" on the dead track near Yokokawa Station