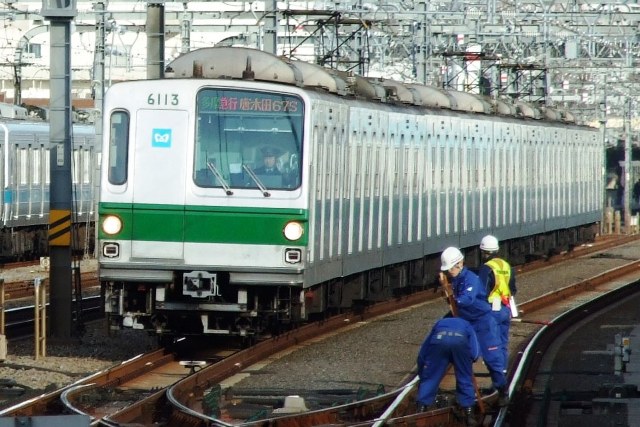 Do you have any brothers or sisters who live in other countries?

Yes, I do. Currently, I live in Indonesia and have a brother who lives in Japan. In fact, "brothers in other countries" are not just found in human society. The same thing can be found in trains. Today let me introduce you to "train brothers", who live in Japan and Indonesia.

Look at the top photo. This is commuter train 6113F of EMU (Electrical Multiple Unit) Tokyo Metro 6000 series operated on the Tokyo Metro-Chiyoda Line, the JR East Joban Line and the Odakyu Line. It was manufactured as the 13th boy of 36 brothers in 1971. I took this "6000 series of brothers" to go to the office every day when I lived in Japan. Although the train has 10 cars, it was always packed in the morning and it was difficult to read a newspaper. The redeeming feature of this packed train was that it had air conditioners installed between 1989 and 1994.

The 15th and 26th boys (6115F and 6126F) of the 6000 series brothers recently arrived at Jakarta, Indonesia to spend a new life after retirement from Tokyo Metro (Photo at the bottom). They are being modified to the local style and waiting for thier trial runs. The colour was changed from a green colored belt to a flashy red-yellow mask and belt. This is Indonesian style, because tropical people like Crayola colors.

I wish 15th and 26th boys well for their new lifes in Jakarta. 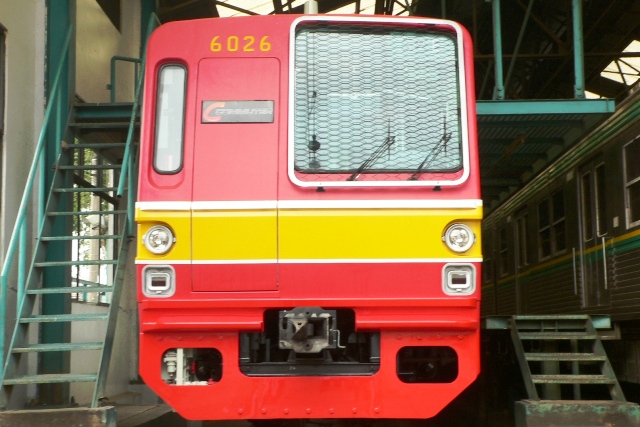 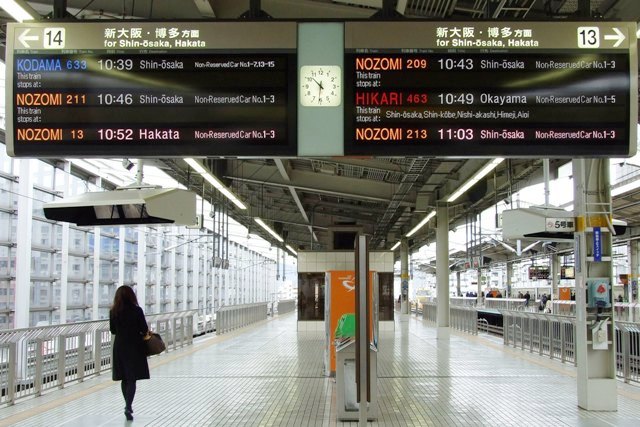 Platform of the Tokaido-shinkansen at Kyoto Station, JR Central

Look at the photo at the top. A lot of westbound trains are scheduled to depart at Kyoto Station on the Tokaido-shinkansen, JR Central (Central Japan Railway Company). The first train is “Kodama 633” bound for Shin-osaka departing at 10.39 from track No.14. Then, “Nozomi 209” also for Shin-osaka will depart at 10.43 from track No.13 and so on. It’s very busy, minumum every 3 minutes. One train is composed of 16 cars and is able to carry 1,323 people, so the maximum transport capacity is 19,845 persons per hour with a maximum speed of 300km/h (the Sanyo-shinkansen section)!

Another amazing thing is that the railway employees are very well-trained and orderly. Look at the video at the bottom. It's a crew change scene shot at Shin-osaka Station. The female driver stands completely still almost all the time (0:00-2:27), while she is standing by on the platform. She is very polite to the passengers (2:10-2:15). The efficient transition briefing scene (2:27-2:47) with her predecessor is also very impressive.

Shinkansen is a crystallization of technology and wisdom.

Tokyu 300 Series, A Descendant of the "Tamaden" 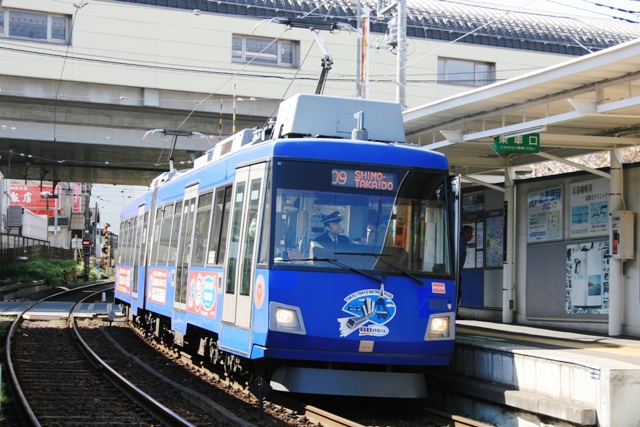 ﻿﻿﻿﻿﻿﻿ Electric car Tokyu 300 series, 303F (blue) at Yamashita Stop
﻿﻿﻿
Although a modern railway system has been developed, there are still two traditional tram routes in the Tokyo metropolitan area. One of them is the Toei (Tokyo Metropolitan Government) Arakawa Line and the other is the Tokyu-Setagaya Line. Today, let me introduce you to the Tokyu-Setagaya Line, which is operated by the private railway company, Tokyu Corporation.

The Setagaya Line, connecting Sangen-jaya and Shimo-takaido (5.0km), was completed in 1925 as a branch route of the "Tamaden (Tamagawa Line)". The main route of the Tamaden, connecting Shibuya and Futako-tamagawa via Sangen-jaya, was constructed on highway Route 246. Meanwhile, the branch route was constructed as an exclusive track. Unfortunately, the main route of the Tamaden was abolished in 1969, due to heavy traffic jams. As a result, only the branch route exclusive track was left as the Setagaya Line.

The electric car 300 series on the Setagaya Line was launched in 1999. The train is articulated and composed of two cars. A total of 10 sets have been manufactured. Each set is a different color such as blue (photo at the top), light green (photo at the bottom), pink, yellow and so on. I sometimes ride on this tram and enjoy a relaxed walk at the weekend, when I stay in Japan. The tram runs leisurely through residential areas in a western suburb of Tokyo. Although the electric cars have been modernized, the atmosphere along the tram line remains the same.

The Tokyu 300 series is a true descendant of the Tamaden. 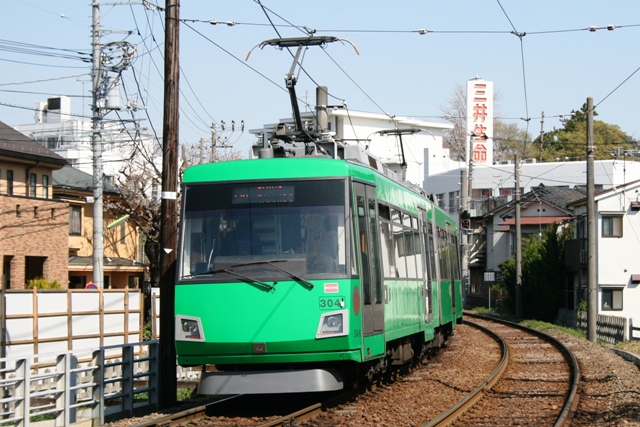 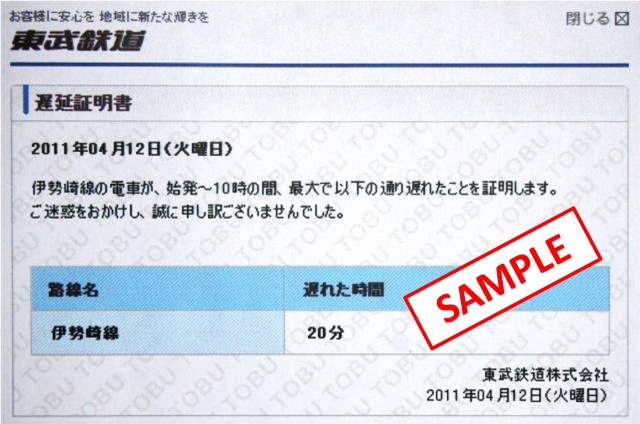 In Japan, the best way to get out of a quagmire is to obtain a “delay certificate” on the internet and submit it to your teacher or boss, if it was caused by a delay of the commuter train.

Look at the copy at the top. This is an example of delay certificate issued by Tobu, which is one of the major private railway companies in the Tokyo metropolitan area. This certificate shows that trains on the Tobu-Isesaki Line were delayed for a maximum of 20 minutes between the first train and 10 o’clock in the morning on Tuesday, April 12, 2011. Even if it was delayed a maximum of 20 minutes, Tobu issues a delay certificate.

You can see another example at the bottom. This is also a delay certificate, issued by Odakyu Railway Company, which operates in the southwestern part of Tokyo and the central part of Kanagawa Prefecture. The certificate indicates that all westbound trains on the Odakyu Line were delayed for maximum of 10 minutes between the first train and 10 o’clock in the morning on Friday, April 15, 2011. Again… only a 10 minute delay tops. What a punctual railway company it is!

A delay certificate is an ultimate level of service to passengers in Japan. 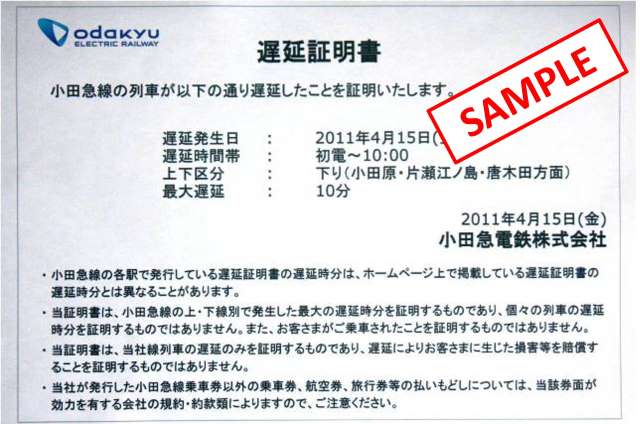 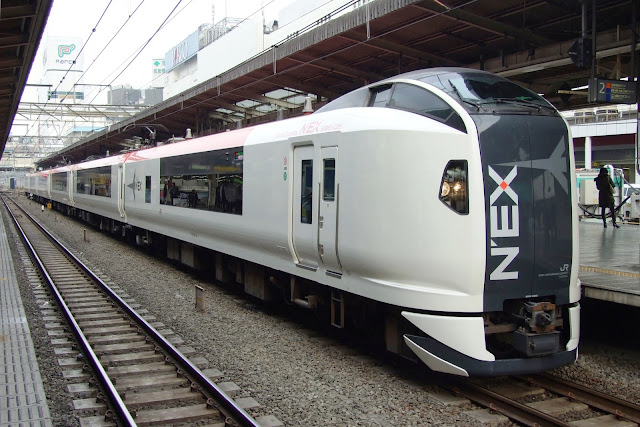 To be honest, Narita Airport has a lousy reputation as an inconvenient access, because it's far from downtown Tokyo. It takes nearly a full hour from Tokyo (central) Station by express train. The distance between Tokyo Station and Narita Airport is about 80km.

Railway companies can't just sit here and do nothing. Last year (in 2010), a large breakthrough was accomplished by the New "Skyliner", which is able to travel between Nippori (one of the terminal stations in downtown Tokyo) and Narita Airport in 36 minutes with a 160km/hour maximum speed. It is operated by Keisei Railway Company. The rival of Skyliner is the new "Narita Express (N'EX)", EMU (Electrical Multiple Unit) E259 series, operated by JR East since 2009 (photo at the top).

The maximum speed of the new N'EX is 130km/hour only; however, it has the advantage in its variety of operating routes, such as Narita Airport - Tokyo, Shinjuku, Ikebukuro and Yokohama terminals. I am also a user of N'EX from Shinjuku to Narita Airport, when I go abroad. One of my favorite spots in this train is the lavatory! It's quite spacious and immaculate (photo at the bottom). Passengers with babies or who use electric-powered wheelchairs can also use it easily.

The new N'EX… is a comfortable airport access in the Tokyo metropolitan area. 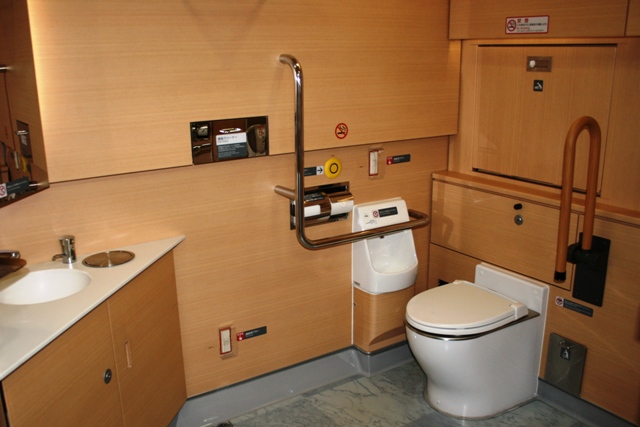 Spacious and immaculate lavatory of the new N’EX

The Railway Museum, a Holy Place for Railfans 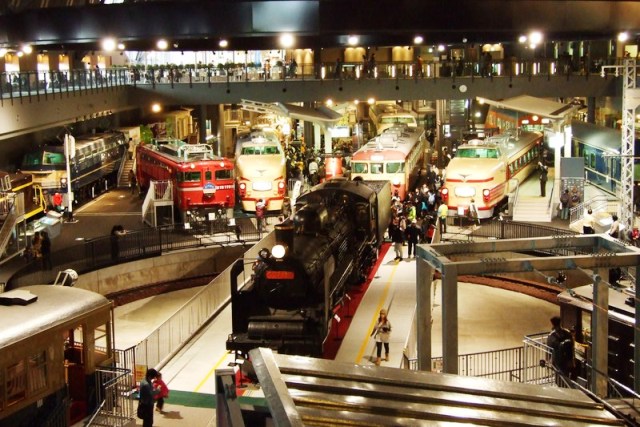 There are several railway museums in the Tokyo metropolitan area. The largest one is "The Railway Museum", which is located in front of Tetsudo Hakubutsukan (The Railway Museum) Station on the New Shuttle, Saitama Shin-toshi Kotsu Line, Saitama City, a northern suburb of Tokyo.

This museum was originally opened as "The Transportation Museum" by the Japanese government near Kanda Station, on the Chuo Line, in down town Tokyo in 1936. The Transportation Museum was closed in 2006 due to the aging of its facilities. Then, in 2007, most of its showpieces moved to the newly-opened Railway Museum, which is sponsored by the East Japan Railway Foundation.

The Railway Museum exhibits historic items, such as “Class 150”, Japan's first steam locomotive (photo at the bottom) manufactured in the UK in 1871, “Class De 963” Japan’s first electric car manufactured in 1904 and “EMU 0 series”, the first Shinkansen (bullet train) manufactured in 1964. Plenty of attractions, such as train driving simulators and a large model railway diorama, are also exhibited. They are very popular among boys, girls and railfans.

When I was a child, I often visited the Transportation Museum with my uncle, who was also a railfan. My favorite exhibition was an automatic door on the electric car. I pretended to be a train conductor and got absorbed in switching the door all day long. The same attraction is still in use in the Railway Museum. Time really flies, doesn't it?

The Railway Museum, it is a holy place for railfans in Tokyo.
﻿ 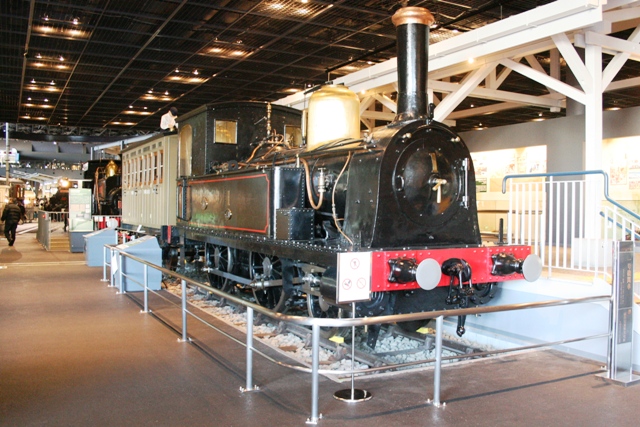 Japan's first steam locomotive, Class 150, manufactured in the UK in 1871 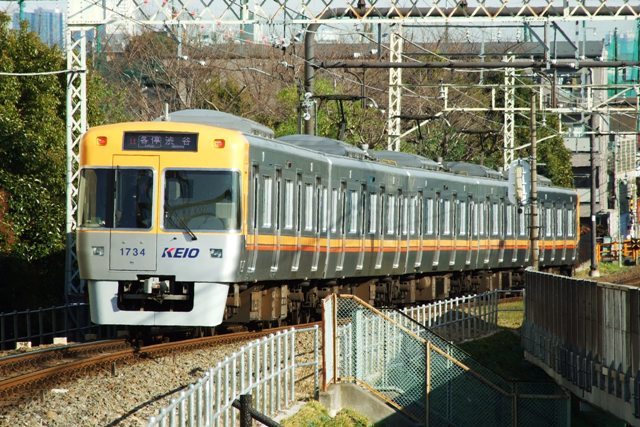 I was born in a western suburb of Tokyo, along the Keio-Inokashira Line. Keio is one of the private railway companies in the Tokyo metropolitan area. The route consists of the Keio Line and the Inokashira Line, extending to the western part of Tokyo and northern Kanagawa Prefecture.

The EMU (Electrical Multiple Unit) 1000 series operates on the Inokashira Line, connecting Shibuya and Kichijoji stations. The commercial operation of this EMU started in 1996, as the first long (20m) body train, which is composed of 5 cars with a VVVF (Variable Voltage and Variable Frequency) control system, on the line.

One of the features of this stainless-steel body EMU is that each train set shows a different color on the front mask and the side lines. Those are orange-beige (photo at the top), ivory white (photo at the bottom), salmon-pink, light-green, lilac, light-blue and blue-green  ... the seven rainbow colors. This coloring has been a tradition of trains on the Inokashira Line since 1962, when the EMU 3000 series stainless-steel cars were launched as the first-generation rainbow colored trains. 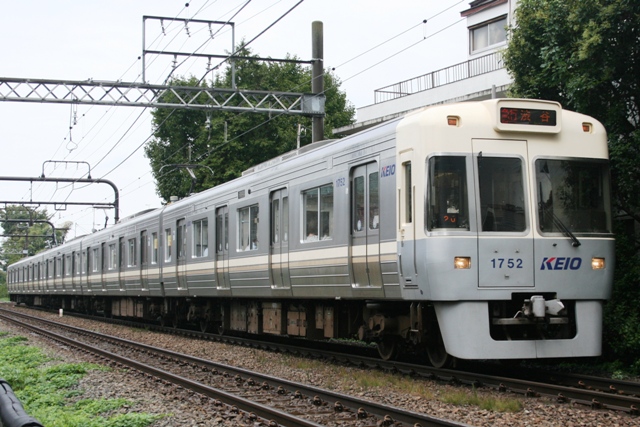 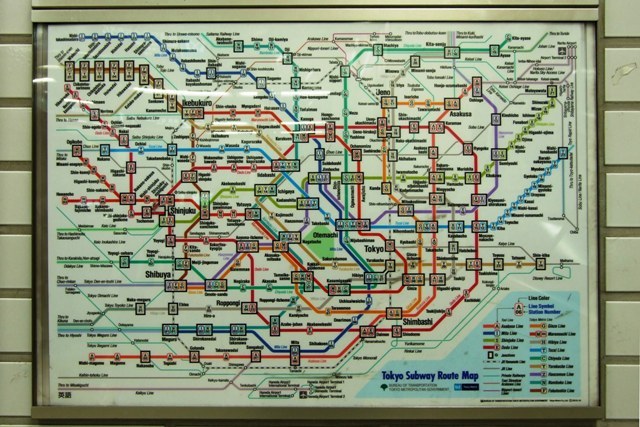 
I am a Japanese railfan, now residing in Indonesia. I am posting my blog under the name “Yopie” to introduce you to railways in Tokyo, my hometown.

As you are aware, my home country, Japan has been facing difficulties, including tsunami and nuclear power plant disasters that followed a giant earthquake. Japan seems temporally lost now. However, Japan is potentially vigorous. For example, look at the frequently operated commuter trains in Tokyo. Nearly 10 million people use them every day! Tokyo is ranked as one of the world's most complete railway network cities. You can see a complicated subway route map at Nezu station, Tokyo Metro (photo at the top). Many other public authorities and private companies also have labyrinthine railway networks overlapping subway lines. The photo at the bottom is a railway tariff map of JR East at Kichijoji station. JR East is another giant transporter in the Tokyo metropolitan area. The railway lines stretch in a finely meshed pattern.

I was born in Tokyo and brought up there, but, I still can’t get on and transfer trains in Tokyo precisely, because the railway network is too complicated. I really appreciate these kinds of colorful railway maps, when I visit unfamiliar places in Tokyo.

From next time, let me introduce you to railways in the Tokyo metropolitan area.