Slope Car in the Plum Grove

When I visited Tauta Ume-no-sato (Taura Plum Village) in Yokosuka City last month, I came across a curious transportation means in the plum grove. It looked like a monorail or a funicular, but it was different from both of them. What was that?

The answer is Slope Car operated by Yokosuka City. It's a climbing vehicle that uses an electric motor with a rack-and-pinion driving system. Slope Car is classified as an elevator under the Building Standards Act, not a monorail under the Railway Business Act. The vehicle and the track were constructed by Kaho Monorail Company in Fukuoka Prefecture, Kyushu Island. You can see a similar transportation system in Asukayama Park, Mt. Sarakura, Manna Country Club, a hotel in Hakone Mountain, Minami-Yatsugatake Hana-no-mori Park and so on. The role of the Slope Car is to transport supplies to Taura Youth Outdoor Learning Center. The supplies are barbecue and camping outfits for boys and girls. It's also used for transporting plum fruit to a wine factory in the city. The white-colored vehicle with a small cockpit and the coupled freight car were very lovely, but visitors like me were unfortunately not allowed to ride it.

The Slope Car weaved its way through the full-blown plum trees. The track was very steep in some sections. The plum grove was very beautiful with white, pink and red-colored blossoms. Birds were singing and there was a light breeze, which was very pleasant.

It's an advent of spring.

Good-bye to the EMU 215 Series

Along with the 185 series, one more excellent train was retired from the track synchronizing the new timetable effective from March 13th. It's a double decker train, EMU JR East 215 series.
Businessmen and businesswomen in the Tokyo metropolitan area are very busy. To make matters worse, they have to have a hard time while going to their offices and returning home. It's because the commuter trains in the Tokyo metropolitan area are packed. The 215 series "Shonan Liner" was a healing train for such busy businessmen and businesswomen on the Tokaido main line. By paying an extra fee, they could secure comfortable seats to be relaxed.
The 215 series was launched in 1992 to eliminate congestion in the rush hour. 4 sets, 40 cars in total, were built by Nippon-sharyo and Hitachi. The 215 series had been commissioned as Shonan Liner operated between Tokyo and Odawara on weekdays. On the other hand, the 215 series transformed themselves from commuter to sightseeing trains on weekend. View-Yamanashi was the representative sightseeing train on the Chuo main line using the 215 series. I often used it when I visited Mt. Fuji or other resorts in Yamanashi Prefecture with my family. The view from the upper floor was excellent.
After retirement from the Tokaido main line, the 215 series, Shonan Liner, was replaced by the E257-2000 series, a limited express Shonan. I hope that the new train also becomes a star train on the Tokaido main line.
Labels: JR East

Good-bye to the EMU 185 Series

On March 13th, 2021, a new timetable started on the JR East line. Synchronizing the new timetable, an old EMU 185 series was retired from the track.
The 185 series was launched in 1981 by Japanese National Railways. 227 cars in total were built by Nippon Sharyo, Kawasaki Heavy Industries and others. The specification of the 185 series was rather old, as a classic rheostatic electric control system with DC motors was applied; however, the 185 series was long lived as its mechanism was simple and hardly breakable.
The 185 series was mainly operated between Tokyo and Izu Peninsula as a limited express train, "Odoriko". Odoriko means "a dancing girl" in Japanese. The name of the train comes from the famous novel, "Izu no Odoriko (The Dancing Girl of Izu)" by Yasunari Kawabata (1899-1972), who won the Nobel Prize for Literature in 1968. The Dancing Girl of Izu was published in 1926 as the first work of his literature to achieve great popularity. The story is about a youth's transitory love. A twenty-year-old young man, who was feeling lonely because he was an orphan, met a dancing girl in Izu Peninsula while he was travelling there. Through the meeting and heart-to-heart exchange with her, he was healed and was eventually drawn out of his loneliness.
After the retirement of the 185 series, the limited express Odoriko was succeeded by the E257 -2000 series. Thank you and good-bye, the EMU 185 series. You were the star on the Tokaido main line.
Labels: JR East, SME

EMU 5000 Series: The Largest Fleet on the Shintetsu Line 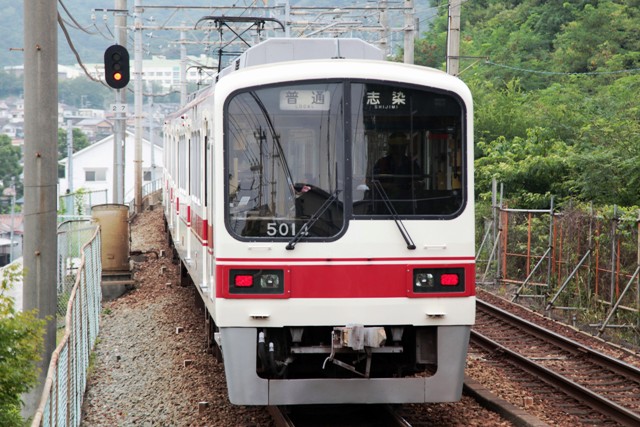 EMU Kobe Electric Railway 5000 series leaves Maruyama station
Because of the state of emergency caused by the new corona virus, I refrain from any nonessential and non-urgent outings. I have no choice but to continue introducing trains, from photos I recently rediscovered on my hard disk.
Kobe is the main city of Hyogo Prefecture, about 600 kilometers west of Tokyo. Although Kobe is a port city facing Osaka Bay, it's also backed by the steep Rokko Mountains. Kobe Electric Railway (Shintetsu) has a 70 kilometers-long extensive network in this mountainous area. Its route has many steep sections.
The EMU Shintetsu 5000 series is a commuter train launched in 1994. It was introduced onto the Shintetsu line to replace an old model, the EMU De 800 series. 10 sets, 40 cars in total, were built by Kawasaki Heavy Industries. All the cars are still operated on the track. One set is composed of four motorcars. Trailers are not coupled because it's operated on the steep tracks.
Regarding the technical specifications, the 5000 series is Shintetsu's first train, which has a VVVF (variable frequency drive) electric control system with induction motors. GTOs (Gate Turn-off Thyristors) are used as semiconductor elements. A constant-speed travel controller (cruise control system) is equipped, since it helps train drivers on the steep sections. The greatest feature of this train is its frontal face. You can see two large frontal windows without a gangway. It's definitely my favorite design.
The EMU Shintetsu 5000 series is the largest fleet on the Kobe Electric Railway. 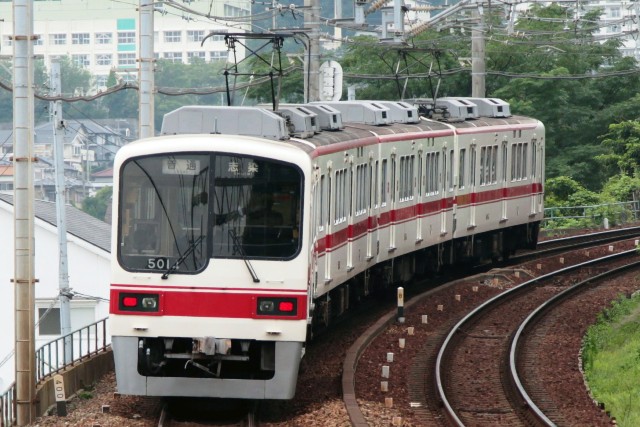 As I posted before, Japan is a country of vending machines. There are over five million vending machines in this country. You can find a number of different machines everywhere. They sell railway tickets, soft drinks, snacks, noodles, rice, stamps, newspapers, magazines, batteries, and even paper fortunes in shrines.
I recently found a unique vending machine on the platform of Yokohama station on the Keikyu main line. It looks just like a soft drink vending machine, but its design is quite unique. It was based on a front face of a Keikyu train. Which train is the model of this machine? The answer is the EMU Type 1800. The Type 1800 belongs to the EMU 1000 series. The technical specifications of the Type 1800 are the same as the other 1000 series trains, but its outer design is slightly different from the other 1000 series. Please look at the photos. You can see a gangway on the middle of the front face of the Type 1800.
The Type 1800 was launched in 2016 as Keikyu's first stainless-steel train. Only three sets of 4-car trains were built by J-TREC Yokohama factory. Because of its gangway position, the Type 1800 can be coupled with each other to make an 8-car train. This coupled train is suitable for direct operation onto the Toei-Asakusa subway line, as passengers can easily evacuate from the train through these gangways in case of emergency in the subway tunnels.
Lastly, the photo of the real Type 1800 is shown below.
Labels: Keikyu, Trivia

EMU 221 Series on the Nara Line

I have already introduced many kinds of trains, which I found in Kyoto station last year, but there's still some left. I'm going to show you the EMU JR West 221 series today. I came across the 221 series on platform number 10 on the Nara line at Kyoto station. The Nara line was once "the kingdom of the EMU 103 series". Many sets of light green-colored 103 series trains were frequently operated, but it has been gradually replaced by the other models such as the 221 series.
The 221 series was launched in 1989 as JR West's first internally developed model after the break-up and privatization of Japanese National Railways in 1987. 474 units in total were built by Kinki Sharyo, Kawasaki Heavy Industries, Hitachi Kasado Factory and the others. One set is composed of eight, six or four cars. The ratio between motorcars and trailers (MT ratio) is one to one. The 221 series has steel bodies. The electric control system is a field added excitation, which is an advanced rheostatic control system using series DC motors.
This model is mainly operated as a rapid train named Yamatoji Rapid. It's convenient for passengers who go to Nara City from Kyoto station on the Tokaido Shinkansen. They can use this luxury train with cozy seats without any extra charge. It's specifically attractive for sightseeing travelers. Needless to say, the competitor of JR West's Yamatoji Rapid is Kintetsu's limited express trains. As a passenger, I welcome two companies' competition.
Labels: Outside Tokyo

The Ocean View Plum Grove on the Keikyu Line

After my visit to a plum grove in the neighborhood, it made me want to go to the other plum grove. In this season, there are many fully blooming plum groves in the Tokyo metropolitan area, so, I couldn't make up my mind which one to choose for visiting next. Eventually, my family chose Taura Ume-no-sato (Taura Plum Village) as our next destination.Taura Plum Village is located about 50 km southwest of Tokyo. From mid-February to mid-March, over 2,000 plum trees in total are fully blooming. Visitors can enjoy the advent of spring in their own way. I enjoyed the fully blooming plum trees backed by the blue sky and the blue ocean. It was very beautiful.

To get to Taura Plum Village, we took the Keikyu main line from Shinagawa terminal in Tokyo and got off at Anjinzuka station. On the way back to the station, I enjoyed taking photographs over a short period of time along the railway track between Anjinzuka and Keikyu-Taura stations. I could shoot a Keikyu train coming out of the number 14 tunnel. My target was the EMU 600 series. The 600 series is a Keikyu commuter train launched in 1994. It has comfortable cross seats in the cabin to provide passengers with good services. 14 sets, 88 cars in total, were built by Tokyu Sharyo and Kawasaki Heavy Industries. The 600 series is directly operated onto the Toei-Asakusa, Keisei, Hokuso and other lines.

I enjoyed an early spring mood on the Keikyu line.

New Koya on the Nankai Line 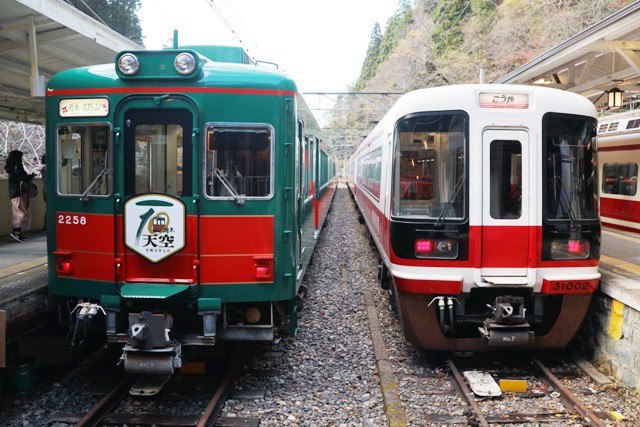