The Longest Suspension Monorail in the World 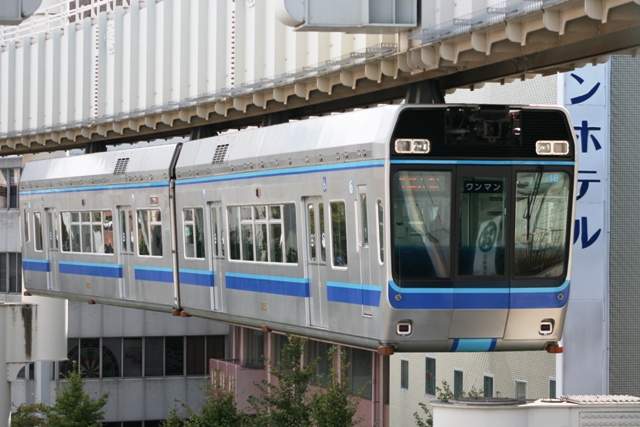 
Further to my July 7th blog, I would like to introduce another monorail in the Tokyo metropolitan area.

Chiba City, which is located 40km east of downtown Tokyo, is the capital of Chiba Prefecture. It’s famous for heavy industries, a large port and agriculture. Its population is nearly 1 million. This city has the world’s longest suspension type monorail system... “Chiba Urban Monorail” (see the top photo).

In the suspension monorail system, the carriage is suspended from a fixed track, which is constructed over streets, canals, rivers and so on. Chiba Urban Monorail was partially opened in 1988 between the Sports Center and Chishirodai stations on Line No. 2. Then, it has been extending its lines one after another. Currently, the line length is 15.2km and it’s composed of two lines, Line No.1 and No. 2.

The running of the monorail is frequent in the morning rush hour… every 4 minutes on average. Meanwhile, it runs every 12 to 15 minutes in the daytime. The EMU 1000 series, which was initially launched in 1988, operates as a 2 car train, but sometimes 4 cars in the case of a large event on the line.

One of the spectacular spots on this monorail is the interchange of Line No.1 and No.2 near Sakae-cho Station. A total of 4 tracks are complexly tangled with each other over the street (see the bottom photo). It’s indeed hard work for me to take a picture, because the tracks were located “high in the sky”.

I've got a sore neck. 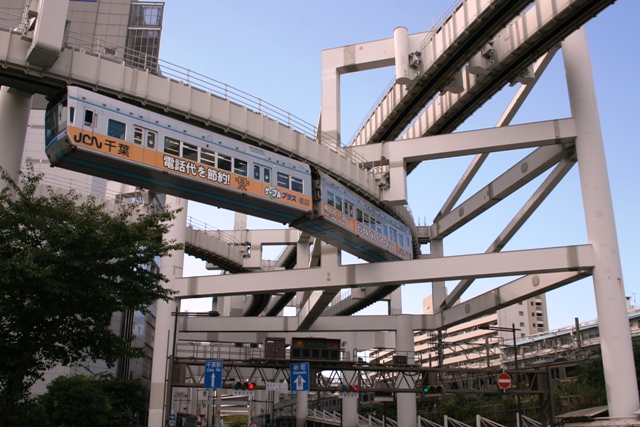 Junction of lines No.1 and No. 2 near Sakae-cho Station, Chiba Urban Monorail