I recently visited Oimachi on the Tokyu-Oimachi line, as I had a business meeting there. After finishing my meeting, I tried using Q-SEAT car on the Oimachi line on my way back home. What's Q-SEAT car? It's a reserved seat car coupled to the EMU Tokyu 6020 series commuter train.
As I have said repeatedly, Japanese businessmen and businesswomen are very busy. They sometimes need something as a treat for themselves, but their journeys home are hard. Needless to say, urban commuter trains are packed on most of the lines in this country. That's a background to urban reserved seat trains appearing.
Q-SEAT car is in Car 3. It has multi-purpose seats, which the conductor can change from long seats to cross seats using a remote control system. The cross seat mode is applied when it's provided as a Q-SEAT car during rush hour. The fee for a seat reservation is 400 yen. Even in the COVID-19 pandemic, the Q-SEAT car was almost full. It's probably because passengers can keep distance from each other.
Incidentally, the 6020 series was launched in 2018. Same as the 2020 series on the Den-en-toshi line, the 6020 series is characterized by its unique "face". It's white and round. The crescent-shaped accent strikes passengers' eyes. The large cowcatcher integrated with the face also stands out conspicuously. The standard long seat cars of the 6020 series have an orange-colored stripe; meanwhile, the Q-SEAT car has a plain orange-colored body. It's easy to recognize.
Labels: Tokyu 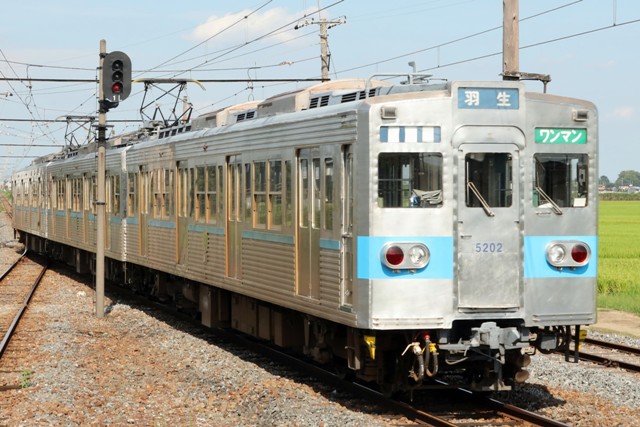 EMU 5000 series travels on the Chichibu Railway
Do you know rice paddy art? It's an art style using real rice paddies as a canvas. Pictures and words are "painted" with varieties of rice that produce different colors. Artists are farmers and local people. They plant rice in the paddies in spring. After growing, the rice paddies become a giant picture. There are more than 20 rice paddy arts in Japan, but you can see the best example in Gyoda City of Saitama Prefecture, about 60 kilometers north of Tokyo. It's known as the world's largest rice paddy art.
This year's theme of the rice paddy art in Gyoda City is "Revived Japonisme: Ukiyoe and Kabuki". You can see Japanese traditional Ukiyoe paintings and Kabuki plays in the rice paddies. The area of the paddy art is 28,000 square meters. It was planted by 200 local people. To see the paddy art, visitors should climb Ancient Lotus Tower (50 meters in height) in Kodai Hasu no Sato Park. The best observation period is from July to the rice harvest season in September.
To visit this giant paddy art, the nearest railway station is Gyoda-shi (Gyoda City) on the Chichibu Railway. My vehicle was the EMU 5000 series. The 5000 series is originally the Toei (Tokyo Metropolitan Government) 6000 series, which was launched in 1968. 4 sets (12 cars) in total were transferred to Chichibu Railway in 1999 after their retirement from the Toei-Mita line. Currently, 3 sets (9 cars) of the 5000 series are still operated on the track. 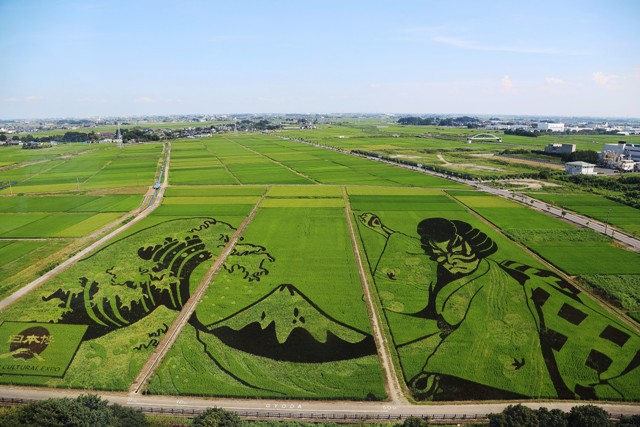 Good-bye to the Double-decker Shinkansen Train 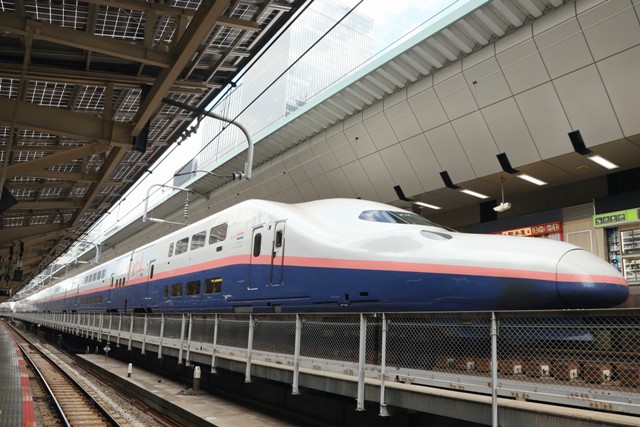 JR East recently announced that the double-decker Shinkansen (new trunk line) train, the EMU E4 series, will soon be retired from the track.

The E4 series was launched in 1997 as JR East's second generation double-decker Shinkansen train. It's operated on the Joetsu Shinkansen as super-express trains named Max-Toki and Max-Tanigawa. The E4 series consists of 8 cars, which can accommodate 817 seats in one set; so, a maximum of 1,634 seats are available, when two sets of the E4 series trains are connected. It's the world's largest high-speed train. Although its speed is limited to a maximum of 240 kilometers per hour, it's utilized as a dependable monster train to transport large numbers of passengers during rush hour. I sometimes used the E4 series on my business trip to Niigata. The best advantage was its good view from the upstairs window.

The last run of the E4 series will be on October 17th. Sayonara (good-bye) and arigato (thank you), the E4 series double-decker Shinkansen train. 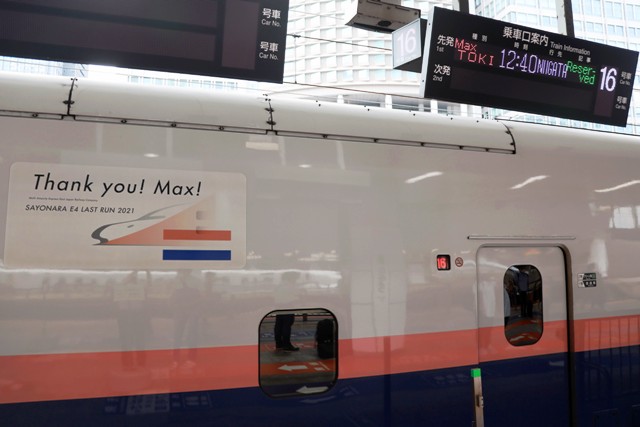 "Thank you, Max" sticker is displayed on the body of the E4 series 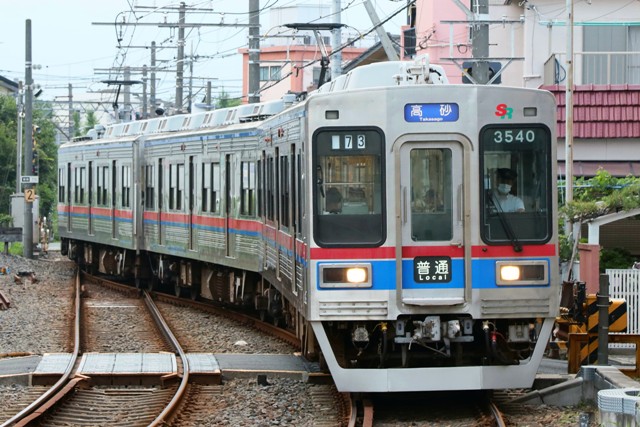 3540F of the EMU Shibayama 3500 series travels on the Keisei-Kanamachi line
Shibayama Railway is the shortest railway line in Japan. Connecting Higashi-Narita and Shibayama-Chiyoda, its operating length is only 2.2 kilometers. The track is single and electrified. The gauge size is 1,435 millimeters. The electric system is 1,500 V DC overhead. This short route was opened in 2002. All trains are directly operated onto the Keisei line to Narita, Ueno and so on.
The function of Shibayama Railway is quite unique. It's a compensation for local people after the completion of New Tokyo International (Narita) Airport. In particular, the local area, namely Shibayama, was isolated by the airport, so, Narita International Airport Company constructed a new railway line to connect Shibayama and the downtown Narita City. The railway track passes through the underground of the airport. It doesn't stand out.
I recently came across Shibayama Railway's 4-car train on the Keisei-Kanamachi line. It was set 3540 of the EMU 3500 series. Set 3540 is Shibayama Railway's only train being operated. It was built by Nippon Sharyo in 1973 as Keisei Electric Railway's commuter train, and then leased to Shibayama Railway in 2013. You can easily identify it by "SR (Shibayama Railway)" logo on the front. Its shining stainless-steel bodies with the classical corrugations are my favorite. Its large frontal windows are also cool even though 48 years have already passed since it debuted.
Set 3540 sometimes appears on the Keisei line for operational reasons. It's homecoming to the country of origin temporarily for set 3540. Welcome home.
Labels: Keisei, SME 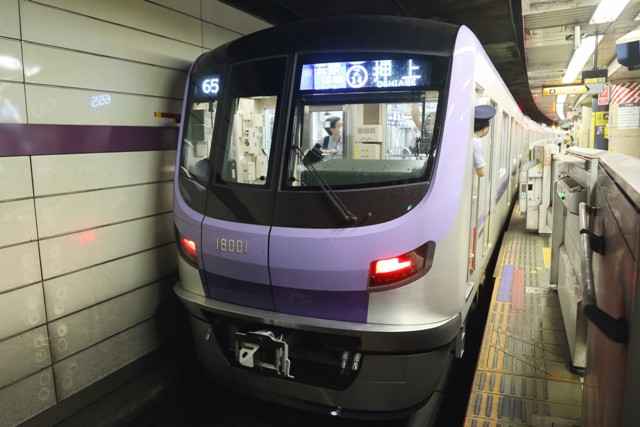 I just thought that I had already introduced all of the labyrinthine subway routes in Tokyo in this blog; but there are some left. Today, I'm going to show you the second shortest subway route in Tokyo... the Honancho branch line.
As its name suggests, Honancho branch line is a feeder route of the mainline. The main line is the Marunouchi line, which is the second oldest subway line operated by Tokyo Metro. Connecting Nakano-sakaue on the Marunouchi line and Honancho near Nakano rail yard, the total operating length is only 3.2 kilometers. The entire route is an electrified double track. 3 or 6-car trains are operated every 4 minutes to 6 minutes 40 seconds.
The rolling stock on duty on the line is the EMU 02-80, 02 and the 2000 series. The 02-80 series is a 3-car train operated only on the Honancho branch line; meanwhile, the 02 and 2000 series are 6-car trains, which are directly operated onto the main route of the Marunouchi line. A black-colored stripe is added on the bodies of the short 02-80 series to make it easier to distinguish from the long 02 series.
For your information, ATO (automatic train operation) system has been introduced on the Honancho branch line and the Marunouchi line. The conductor is not on board the train. The driver operates the passenger doors from the cockpit using multiple monitors, and just pushes the ATO start button for departure. He (or she) will just watch the automatic operation.
Labels: Tokyo Metro 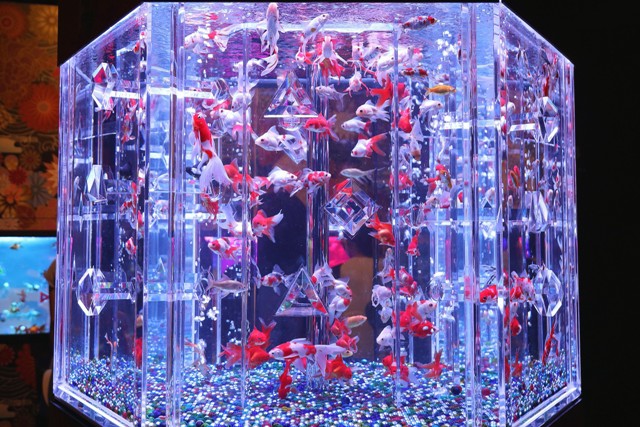