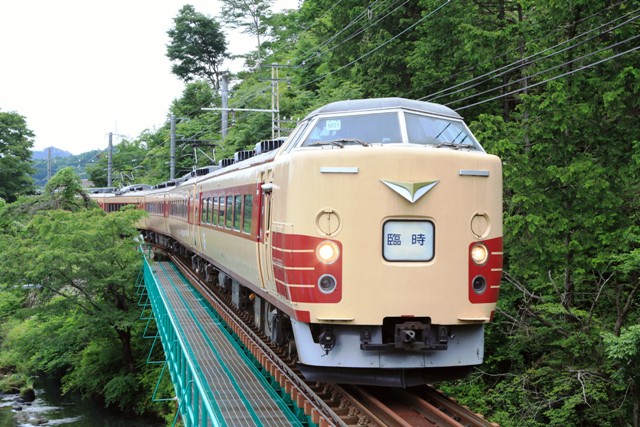 Following the old streetcar exhibited in the Yokohama Tram Museum, I am going to continue to show you the other old pictures, which I rediscovered on my hard disk.

The EMU 183/189 series (the train set mixed by the 183 and 189 series) was a limited express train originally launched by the Japanese National Railways (JNR). The bodies of the 183/189 series was frequently called "the JNR color". Although JNR was abolished a long time ago, many rail-fans were boosterish about this coloring, because it fitted into any kind of scenery in Japan from urban business centers to mountain forests.

Technical specifications of the 183 and 189 series were almost the same. The only difference was that the 189 series had an additional system for operating on the Shin-etsu main line. It was a cooperative operation system with electric locomotives. This additional system was used for crossing the Usui mountain pass on the line. It was so steep that the 189 series was helped by the locomotive named Class EF63. After the inauguration of the Nagano Shinkansen (present the Hokuriku Shinkansen) in 1997, the track for crossing the Usui mountain pass was abolished. The 189 series became unnecessary, and was transferred to the other routes in the eastern part of Japan. They were then coupled with the existing 183 series, and became the 183/189 series.

The 183/189 series were retired from the tracks by March 28th, 2019 due to deterioration. It was the end of an era for the JNR colored trains. 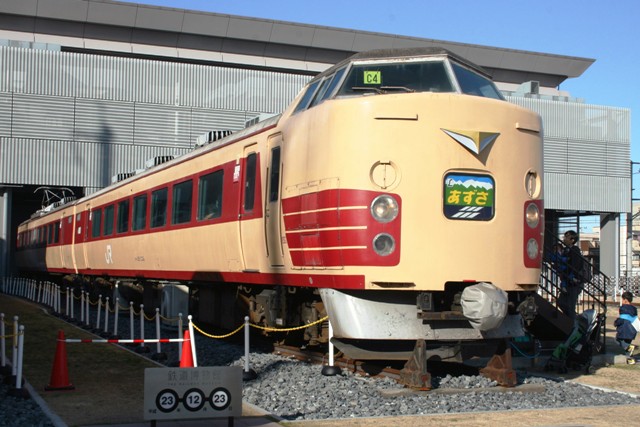 Good-bye to the "Platypus Train" 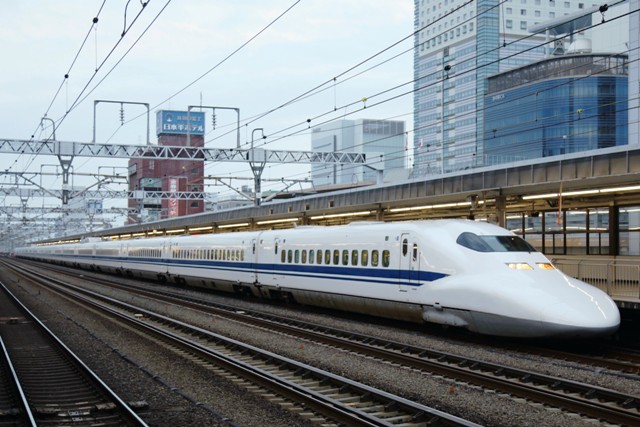 On December 11th, 2019, JR Central made a press release announcing that their train, the EMU 700 series, will be retired from Tokaido Shinkansen soon. The last run will be conducted on March 8th, 2020.

The EMU 700 series, which was developed by JR Central and JR West, debuted in 1997 as an advanced prototype model. Mass produced cars were then launched in 1999. A total of 91 sets, 1,328 units, were built between 1999 and 2006 by Nippon Sharyo, Hitachi, and Kinki Sharyo. The maximum speed is 285 kilometers per hour. It is slower than that of the previous model, namely the JR West 500 series; however, the production and the maintenance cost of the 700 series is lower than that of the 500 series. The 700 series was called "Platypus Train" by rail fans, as its face looks like the unique Australian animal. Needless to say, its unique shape was designed to reduce air resistance during the high speed operation. The brother of the 700 series is operated in Taiwan as Taiwan High Speed Rail's 700T series, and it has a maximum speed of 300 kilometers per hour. 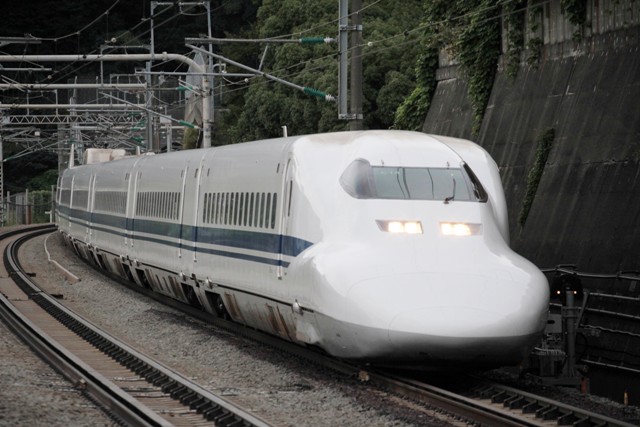 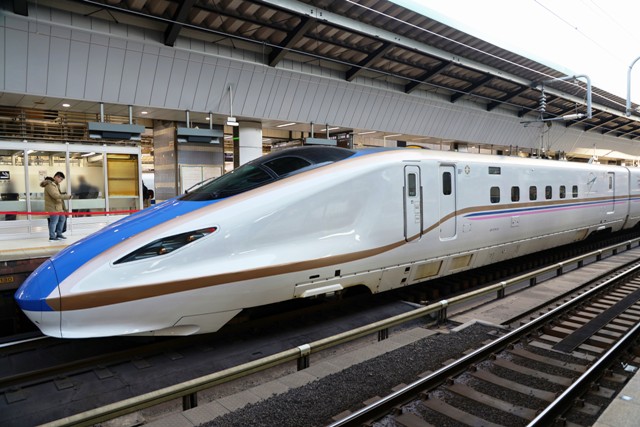 Rail fans, who are familiar with Japanese railways, probably know that the EMU E7 series train is for Hokuriku Shinkansen. It's true, but not necessary the correct answer. On March 16th, 2019, JR East started to operate it on Joetsu Shinkansen as well. It is because the existing E4 series has deteriorated, and needs to be replaced by the other models.

An unforeseen disaster happened in September last year. A big typhoon hit the central part of Japan. A total of 8 sets, 96 units, of the E7 series suffered from flood damage at Nagano rail yard. JR East originally planned to replace all the old Joetsu Shinkansen trains by the new E7 series by the end of March, 2023. I think that the original plan should be changed.

Disasters befall us when we least expect them. 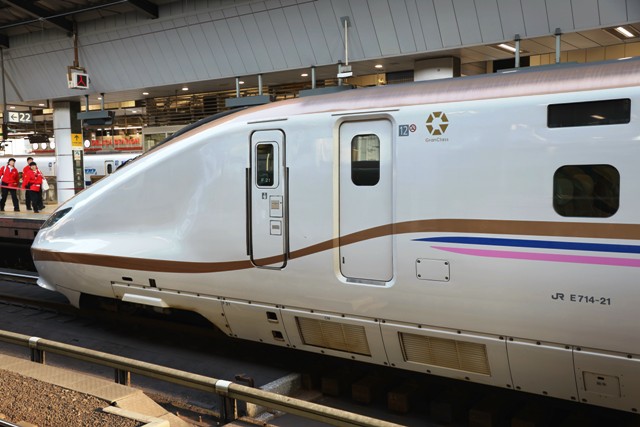 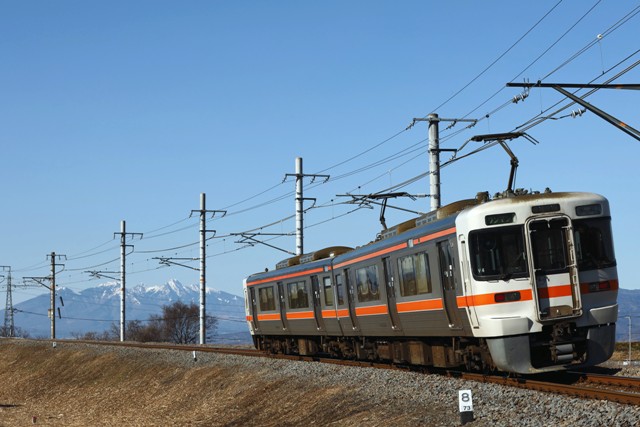 Come winter, I like to see snow-capped summits in the countryside of the Tokyo metropolitan area. I recently visited Yamanashi Prefecture, and enjoyed viewing the beautiful mountain scenery surrounding the Kofu basin while soaking in a superb hot spring. Yatsugatake (Eight Peaks, 2,899m at the highest) was specifically beautiful to the north.

To get to this viewing spot with the hot spring, the nearest station was Kai-Ueno on the JR Central Minobu line. I took the JR East Chuo line from Tokyo, and got off at Kofu Station. From Kofu, a local train brought me to Kai-Ueno. It took about a total of two hours and a half from Tokyo to Kai-Ueno station.

The EMU 313 series is the main force for the local trains on the Minobu line. It was launched in 1999 to replace the old ex-JNR (Japanese National Railways) models. The stainless body with a white "face" and orange stripes is cool. Single armed pantographs on the roof are cute. One set is composed of two cars with four 185 kW induction motors per unit. The electric control system is IGBT-VVVF inverter (Insulated Gate Bipolar Transistor - variable frequency drive).

Along with the viewing of the winter mountains, the local trains on the Minobu line was also my attraction there as a rail fan. It was operated without conductors. The driver had to operate passenger doors, and check tickets at unmanned stations as well. He always looked very busy. It's hard work. Thank you for the good job. 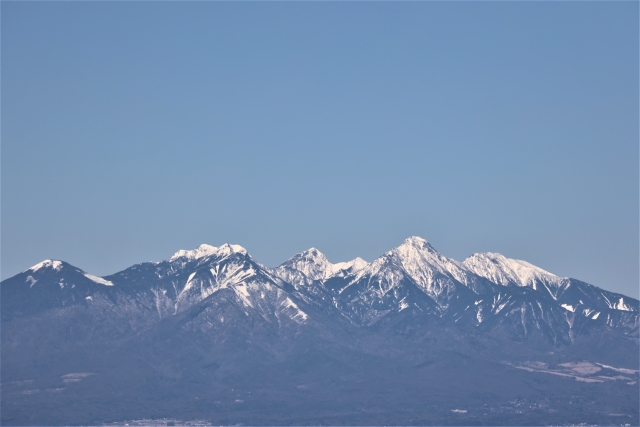 View of Yatsugatake mountains from a hot spring in Kofu Basin

The Station Where You Can See Tokyo Skytree 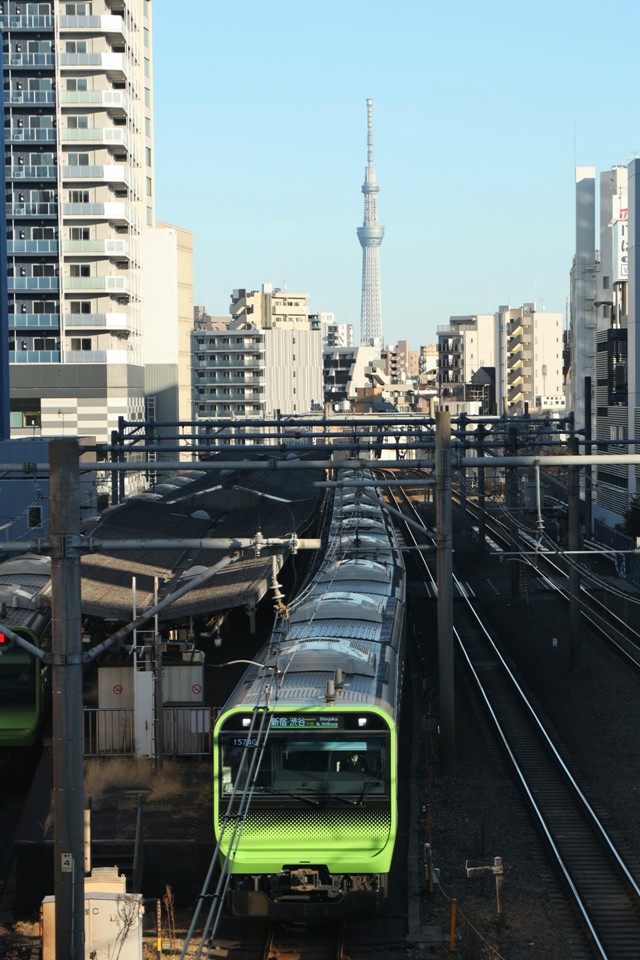 EMU JR East E235 series leaves Otsuka station backed by Tokyo Skytree
I recently found an urban view point in the downtown Tokyo area. It's a bridge over the railway tracks near Otsuka station on the JR East Yamanote line. We can see both Tokyo Skytree and the JR trains there. Tokyo Skytree is a TV and radio broadcasting tower completed in 2012. It's located about 8 kilometers east of Otsuka station, and known as the tallest freestanding broadcasting tower in the world. The construction of this new landmark in Tokyo was commenced in July 2008. It reached the target, a height of 634 meters on March 18th, 2011, just one week after the 3.11 giant earthquake in the eastern part of Japan. Skytree looks very beautiful specifically on a bright and clear afternoon in the sunlight. 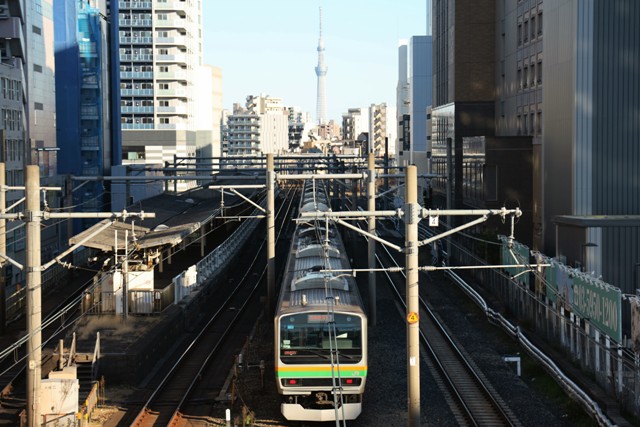 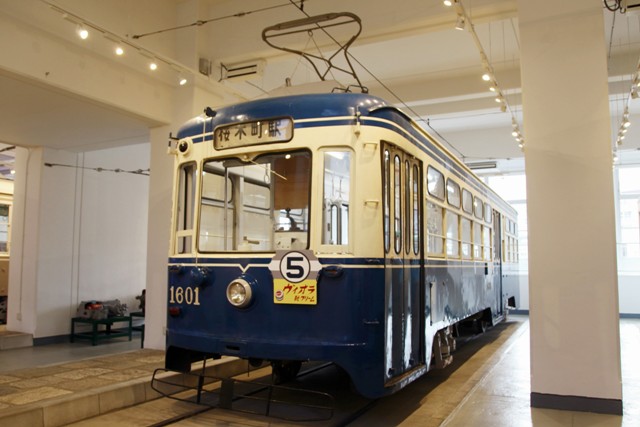 Following the Unazuki rail yard of Kurobe Kyokoku Railway, I am going to show you the other old pictures, which I recently found in my hard disk.

The electric car 1600 series is the last new streetcar in Yokohama City. A total of 6 units were built by Takigashira Factory of the Transportation Bureau of Yokohama City in 1957. It had a 12 meter-long body with two 30 kW traction motors. The nose suspension drive and the direct electric control systems were adopted. One unit can accommodate up to 100 passengers.

Unit number 1601 of the 1600 series is preserved in the Yokohama Tram Museum. Its rounded steel body with cream and blue colored stripes is my favorite. The tragedy of the 1600 series was its door position. The entrance doors are adjacent to the driver seats; however, the exit doors are provided in the central part of the car. These exit doors were unsuitable for conductorless operations. The driver had to take on the role of a conductor, but he/she couldn't leave his/her seat. As a result, the 1600 series had to be retired in 1970 after the commencement of conductorless operations.

Incidentally, Yokohama is the second-largest city in Japan. This mega-city once had an extensive tram network. The first route was opened in 1904 by Yokohama Electric Railway Company. Although the tram was a useful transportation means for local people, it was unfortunately abolished in 1972 due to heavy traffic congestion in the urban area. 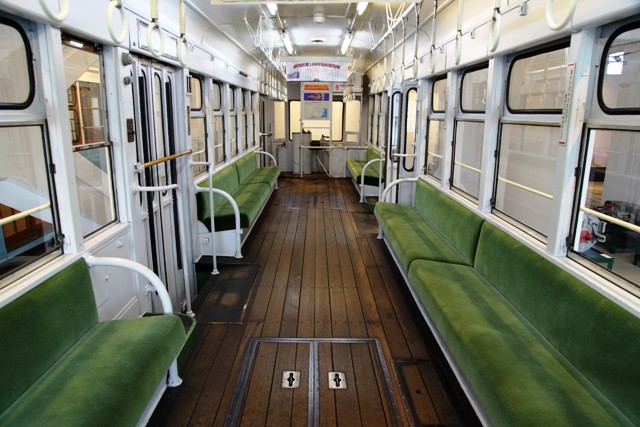 JR Train on the Sotetsu Line 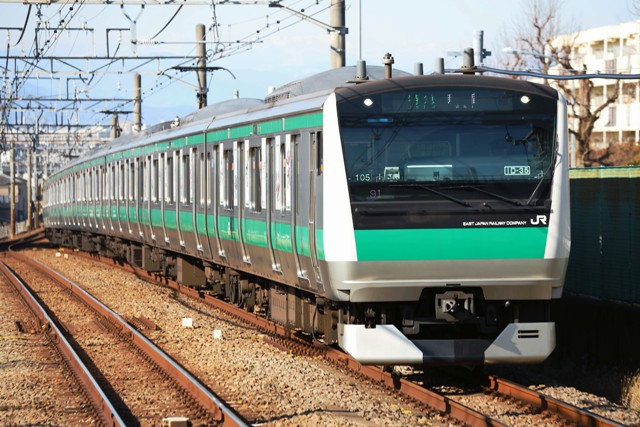 The start of the direct operation between JR East and Sotetsu (Sagami Railway) was big news in the Tokyo metropolitan area last year. I have been feeling Sotetsu's tenacity towards the direct operation of their trains to the downtown Tokyo area. Sotetsu's dream eventually came true. I have already posted three times on this topic in this blog, but they were mainly topics on the Sotetsu trains being operated on the JR East line. Today, on the other hand, I am going to show you the JR East trains, the E233-7000 series, operated onto the Sotetsu line.

The E233-7000 series debuted in 2013 to replace the old EMU 205 series on the Saikyo line. A total of 31 sets, 310 units, were built by JR East Niitsu Factory and J-TREC Yokohama Factory. An additional 7 sets, 70 units, were then built by J-TREC Yokohama Factory in 2019 to prepare for the direct operation onto the Sotetsu line. Its shining stainless steel body with green-colored stripes stands out on the Sotetsu line. With regard to technical specifications, the E233-7000 series has mostly the same as those of the other E233 series trains. A small difference is, for example, the maximum speed. The E233-7000 series reaches 120 kilometers per hour, exceeding the E233-1000 series for the Keihin-Tohoku line, whose maximum speed is 95 kilometers per hour.

The JR East train on the Sotetsu line signals the advent of a new era in the Tokyo metropolitan area. 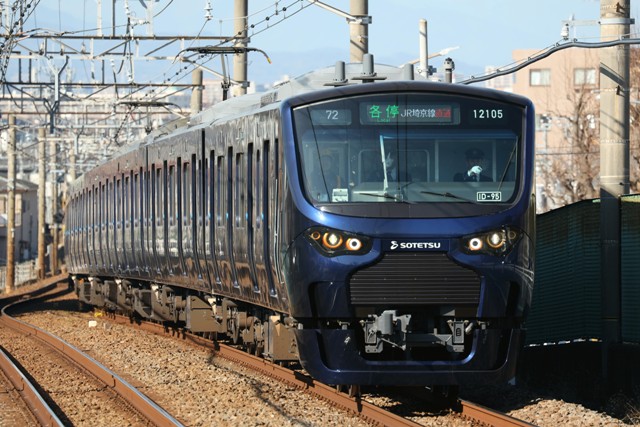 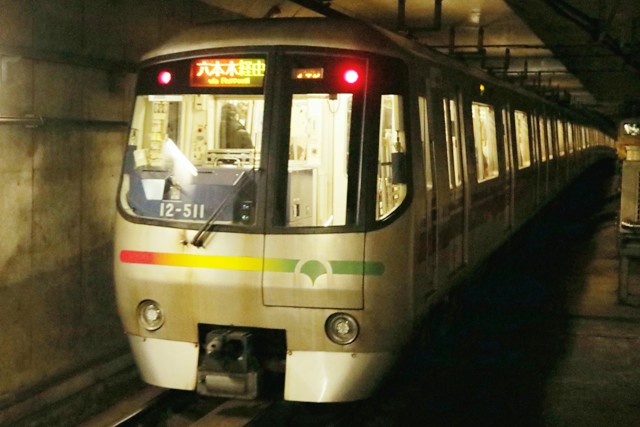 The 2020 Olympics will take place in Tokyo from July 24th this year. Although I feel proud as a Tokyoite, I worry about the traffic congestion during the Olympic games.


I recently visited the National Stadium, which was completed last year in the downtown Tokyo area. The stadium was first built in the early 1960s for the 1964 Tokyo Olympics, and it was rebuilt last year. The new stadium was planned by famous architect Kuma Kengo, who also designed several railway stations such as Keio's Takao-sanguchi and JR East's Hoshakuji. A large amount of timber has been used in the stadium building and many plants have been grown in the stadium corridors. Although I couldn't observe the inside of the stadium, I was able to take a picture of the colorful audience seats with the running track and lawn field from outside using a telescope lens.


To visit the National Stadium, the nearest station is Kokuritsu-kyogijo (the National Stadium) on the subway Oedo line. The Oedo line is the second newest subway route in Tokyo, and is operated by the Transportation Bureau of the Tokyo Metropolitan Government (Toei). Kokuritsu-kyogijo station was opened in 1991, when the Oedo line was inaugurated. I don't think that the station is large enough to accommodate the regiments of passengers during the Olympic games. I recommend that the audience also use Sendagaya station on the JR East Sobu line, as it is larger. Sendagaya is a 5-minute walk from the stadium. 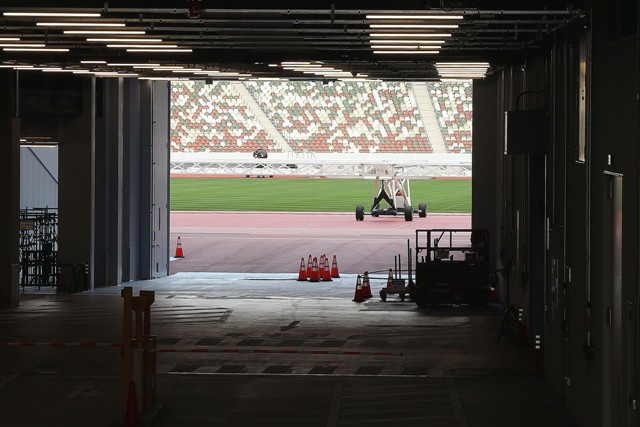