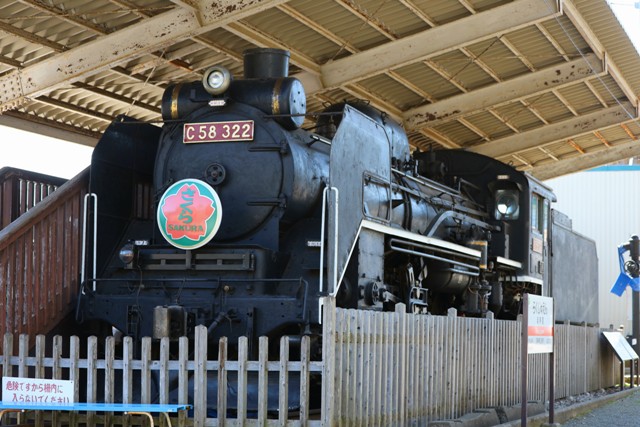 Steam locomotive, unit 322 of the Class C58 is preserved in Mishima City

Mishima is a gateway city to the Izu resort area. It's located about 120 kilometers southwest of Tokyo. The JR Central Tokaido Shinkansen, the Tokaido main line and Izu-Hakone Railway trains extend to Mishima station. Many holidaymakers pass through this station to visit Shuzenji, Izu-Nagaoka and the other reputable sightseeing places.

Wait a moment please. Mishima is not just any transit city. It has its own must-see spots. For instance, I recently visited Mishima Skywalk in the suburban area. It's 400 meters-long, the longest suspension bridge in Japan. Crossing this pedestrian bridge, I could enjoy an excellent view including snow-capped Mt. Fuji. Besides the bridge, many people were enjoying zip-line rides.

For rail-fans, I also recommend visiting Mishima Hometown Museum in the downtown area. You can see a preserved steam locomotive (SL), unit 322 of the Class C58 in front of the museum building. The C58 is a 2-6-2 type (Whyte notation) large SL coupled with a coal tender. A total of 431 units were built by Kisha Seizo and Kawasaki Sharyo between 1938 and 1947. Unit 322 was built by Kisha Seizo Osaka Factory in 1942. After being operated on the Hokuriku main line, it was moved to Mishima City and preserved as an exhibition for Mishima Hometown Museum in 1971.

For your information, two units of the Class C58, namely numbers 239 on the JR East Kamaishi line and 363 on the Chichibu Railway, are still operated on the tracks as sightseeing trains. 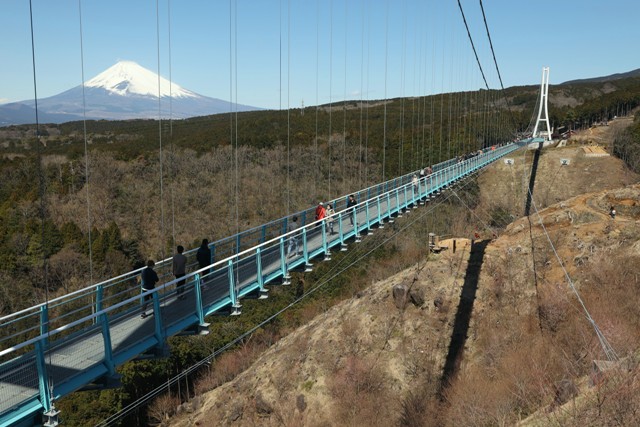 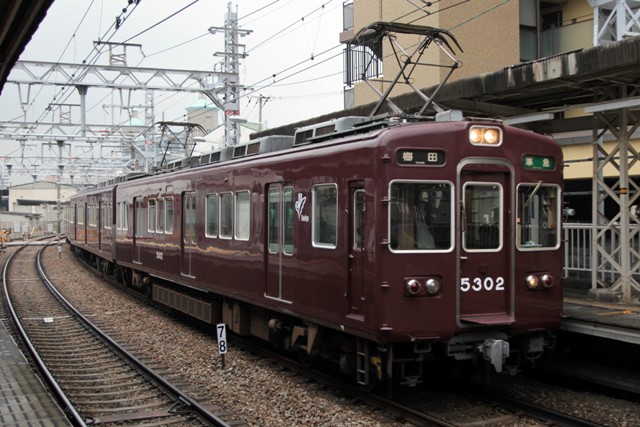 I am going to continue to show you my old photographs, which I recently rediscovered on my hard disk.

Hankyu is one of the major private railway companies in the Kansai (Kobe, Osaka and Kyoto) area. It operates about a 140 kilometers-long line network, and carries an average of two million passengers per day. The track gauge is 1,435 mm and the electric system is 1,500 V DC overhead. All the trains on the Hankyu line have been keeping up a tradition for a long time, which is known as the "Hankyu maroon" trains. This tradition refers to the color, which is like a chocolate or a dark brown shell of a sweet chestnut, and it is very popular among passengers and rail-fans for its elegance.

The EMU 5300 series is no exception. It was launched in 1972 for the Kyoto line. A total of 105 units were built by Alna Kohki between 1972 and 1984. It has an old rheostatic electric control system. You can see large resistor boxes under the train floors. Moreover, it has a dynamic brake system, but it doesn't have a modern regenerative brake system. We no longer see these kinds of old systems on the commuter trains in Tokyo. Although the technical specification is rather out-of-date, the robust steel bodies of the 5300 series are still maintained beautifully. That's "Hankyu maroon". I love it. 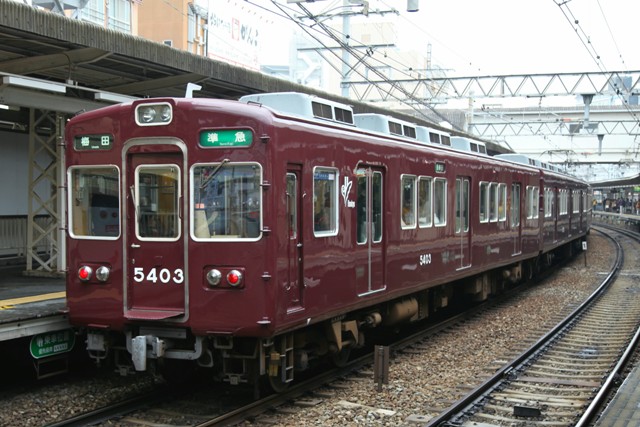 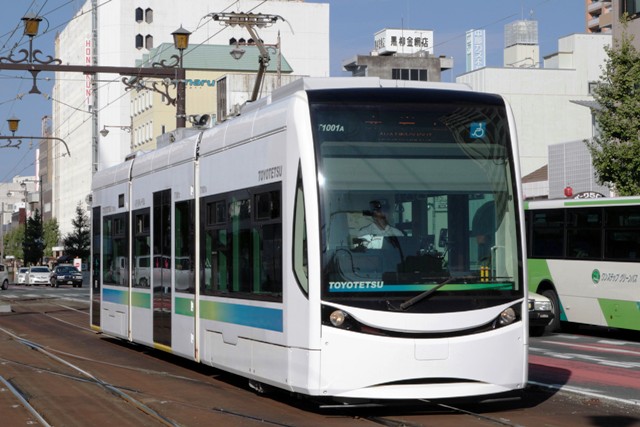 I'm currently very busy at work and cannot visit railways in Tokyo and the other areas. Instead, I'm going to continue to show you the old photographs, which I recently rediscovered on my hard disk.

The electric car T1000 series is a type of LRT (light rail transit). The definition of LRT is not clear, but it is typically an urban low-floor tram with a low noise level in Japan. The T1000 series is the first LRT on the Azumada main line of Toyohashi Railway (Toyotetsu). Only one set was built by Alna Sharyo in Osaka City in 2008. It is an articulated electric car that is composed of 3 bodies (T1001A-T1001C-T1001C) and two trucks. Its total length is 16.2 meters with a riding capacity of 76 passengers. The body is white colored and has a stripe with a blue to green colored gradation. The electric control system is an IGBT-VVVF (insulated gate bipolar transistor-variable frequency drive) inverter with two 85kW induction motors.

The T1000 series is frequently called "Little Dancer Ua" by Alna Sharyo. This nickname derived from the "dancing" image of the vehicle and the "little" size. "Ua" is a type of Little Dancer group. "U" has a floating body (T1000C) and "a" is for 1,067 millimeter-wide track. His (or her) brothers namely Little Dancer S, L, A3, A5, U and C2 are also seen in many cities throughout Japan.

Little Dancer Ua is a new symbol in Toyohashi City. 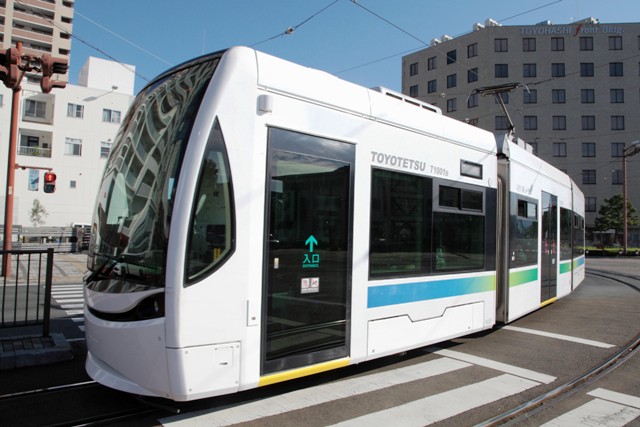 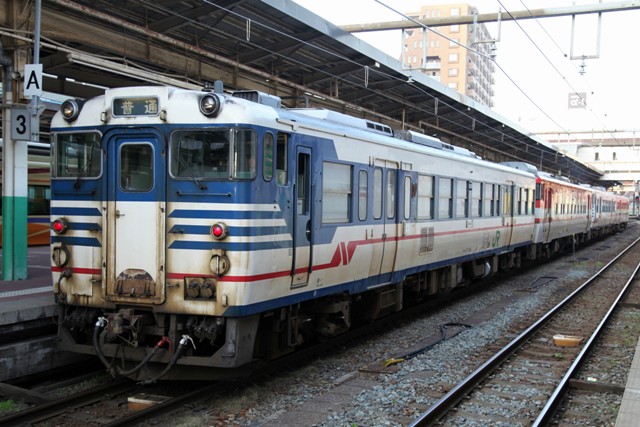 On March 14th, JR group companies changed their timetables all at once. With this change, several old trains were retired from the tracks in the JR East operating area. The representative one includes a diesel rail-car, KiHa 40 series.

The JR East KiHa 40 series was retired from the tracks one after another in the past few years. For instance, it was replaced by the state-of-art battery train, EV-E301 series, on the Karasuyama line. The battery train is an electric car, which has lithium-ion accumulators. The train is operated with accumulators on the non-electrified Karasuyama line. The power is supplied by 1,500 V DC catenaries via pantographs at special facilities in the terminal stations. 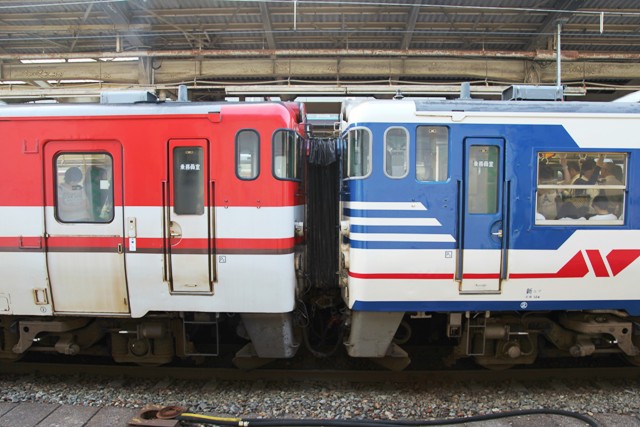 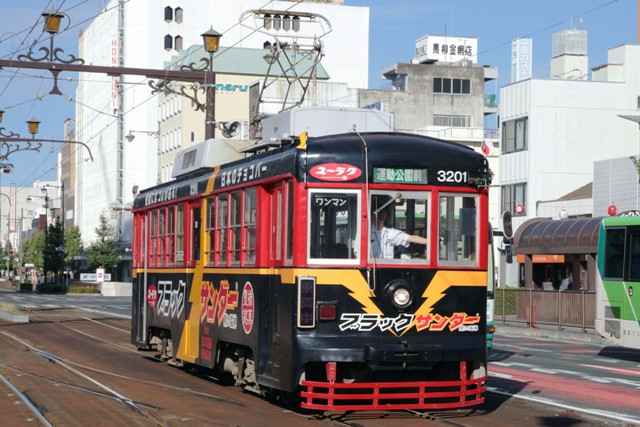 I am going to continue to show you my old photographs, which I recently rediscovered on my hard disk.

Toyohashi is the fifth-largest city in Aichi Prefecture, some 290 kilometers west of Tokyo. The population is about 374,000. It looks to be a local city like any other in Japan, but it is famous among rail fans because Toyohashi has a tram route operated by Toyohashi Railway (Toyotetsu). Toyotetsu is a local private railway company that operates the Atsumi and the Azumada main lines. The latter of these is a tram route in the downtown area. Its route length is 5.4 kilometers. The track is mainly double with some single sections. The electric system is 600 V DC overhead. The gauge size is 1,067 millimeters.

The electric car Mo3200 series is an old streetcar on the Azumada main line. It was built by Nippon Sharyo in 1955, under the name of the Nagoya Railway (Meitetsu) Mo580 series. It is a 12.3 meter-long streetcar with a passenger capacity of 80. After being operated on the Meitetsu lines, three units of the Mo580 series were moved to Toyotetsu and debuted as the Mo3200 series between 1976 and 1981. Currently, only one unit (unit 3203) of the Mo3200 series is operated on the Azumada main line.

Incidentally, the Mo3200 series is decorated and used as Hana-densha (flower train), when the city festival is held. I fortunately came across it, when I visited Toyohashi in 2016. That became a wonderful memory for me. 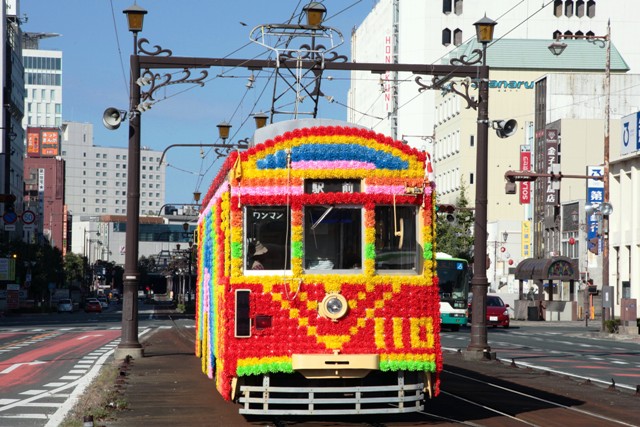 Official information about the electric cars on the Azumada main line (in Japanese):
https://www.toyotetsu.com/shinaisen/train.html
Labels: Outside Tokyo, SME, Tram 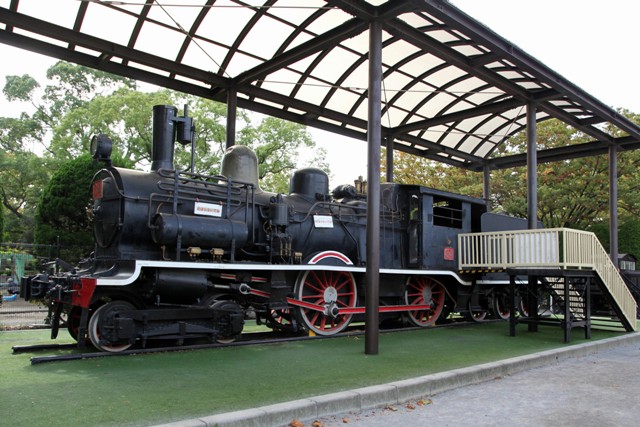 Following the preserved old streetcar, 1100 series, I am going to show you the other photographs, which I recently rediscovered on my hard disk.

In October, 2014, I enjoyed walking in the southern part of Tokyo and found an old steam locomotive named Class B3 in Haginaka public park in Ota Ward by chance. It was preserved in good condition under a special roof.

Class B3 was a steam locomotive on the Tobu Railway. It was commissioned in 1911 for freight transportation. A total of 6 units (unit 29 to 34) were built by Beyer, Peacock & Co. Ltd. in Manchester, United Kingdom. It has leading wheels and a tender (4-4-0 in Whyte notation). The driving wheel diameter is 1,372 millimeters and the gauge size is 1,067 millimeters. The greatest feature of this locomotive is its firebox. It is called Belpaire-type. Belpaire was a Belgian steam locomotive engineer, who developed this efficient firebox. It is said that the circulation of boiler water in the Belpaire-type firebox is quite efficient. Brothers of Class Tobu B3 steam locomotive also belonged to Nippon Railway (present JR group). It was called the Class 5600. A total of 18 units (unit 213 - 230) were imported from the United Kingdom between 1899 and 1902.

Class B3 was retired from the track between 1963 and 1966. Two units are still seen in public parks in the Tokyo metropolitan area. Unit 30 is exhibited in Katayama Park in Tochigi Prefecture; meanwhile, unit 34 is in Haginaka Park. 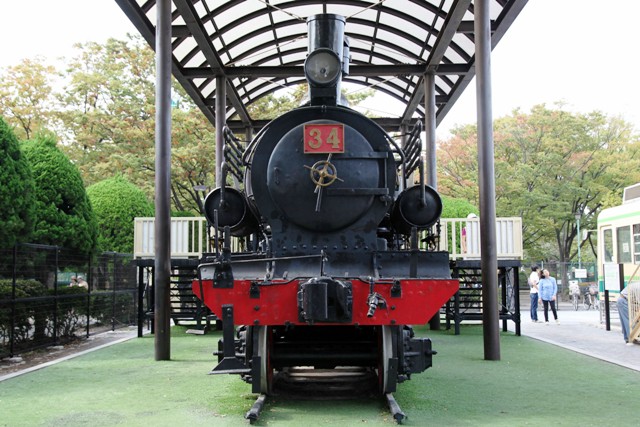 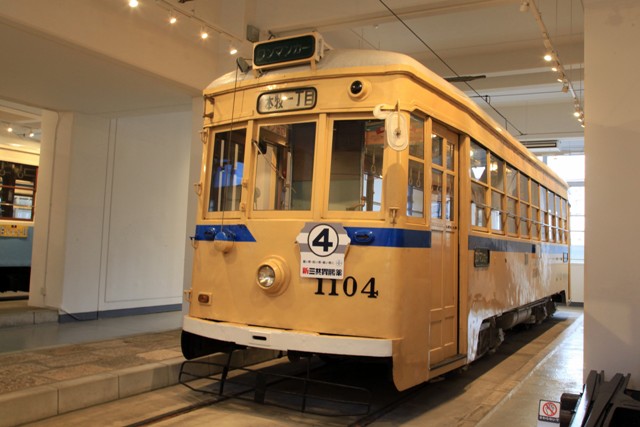 The electric car 1100 series was commissioned in 1936 by the Transportation Bureau of Yokohama City in Kanagawa Prefecture. A total of 5 units were built by Umebachi Sharyo (present J-TREC). It is an 11.4 meters-long small-sized bogie car with a capacity of 74 passengers.

Although the tram was a very useful transportation means for local people in Yokohama City, it was unfortunately abolished in 1972 due to heavy traffic congestion. Currently, two units of the 1100 series are only preserved in the city. Unit 1104 is exhibited in the Yokohama Tram Museum; meanwhile, unit 1156 is exhibited in the Kuraki public park.

The electric car 1100 series was an exactly romance car in Yokohama City. 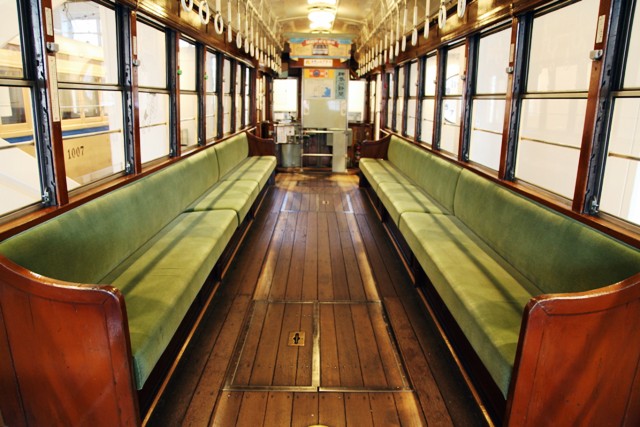 Memories of Japanese Azalea Community in 2019 I am very busy at work. Sorry, I can't respond to my blog readers now. I try to update my blog once every three days, but it's not easy. Today, I am going to select the old photos on my hard disk and introduce them to you instead of the latest pictures.

In June 2019, I went to Mt. Amari in Yamanashi Prefecture to see the full-blown Japanese Azalea community. That was my third visit there. Mt. Amari is located about 120 kilometers west of Tokyo. The altitude of the summit is 1,731 meters above sea level and it is famous for the large natural community of Japanese azaleas. Tangerine colored blossoms that showed up the light green colored leaves. When I visited there, it was clear and I could see the beautiful Mt. Fuji far away. It was a different experience from my previous visits in 2013 and 2014. 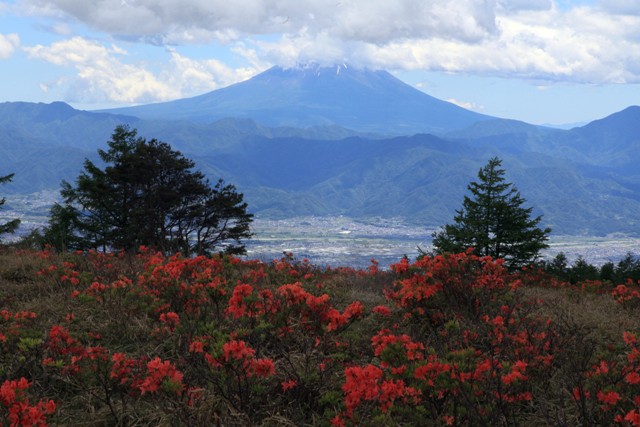 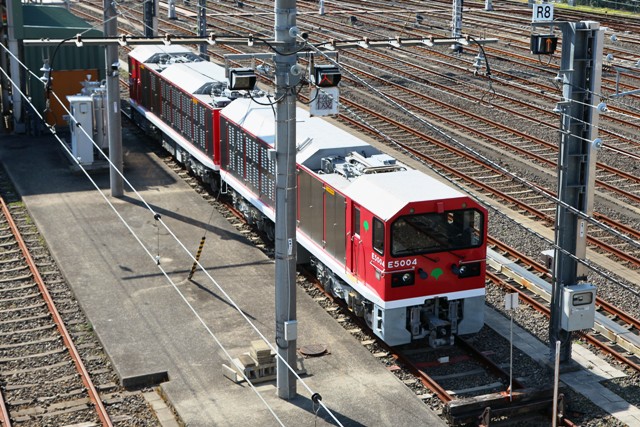 Ikegami looks to be an urban residential area like any other in Tokyo, but once a year, this local area receives a great deal of visitors in February. What is going to happen?

During this period, people flock to Ikegami Plum Garden to see full-blown plums. I visited this beautiful garden with my family last weekend. Although it was the late blooming period, we could see various kinds of plum blossoms with white, pink and red colors. I saw many people who wore masks to prevent infection of the new coronavirus. I hope that infectious disease will be controlled as soon as possible.

After admiring full-blown plums, I visited Toei (the Transportation Bureau of the Tokyo Metropolitan Government) Magome Rail Yard on the Toei-Asakusa line. The yard is conveniently next to the plum garden. Although it was not open to the public that day, I could see inside of the yard from a pedestrian bridge, and found lovely small electric locomotives named the Class Toei E5000. The Class E5000 was launched in 2006 as Toei's first electric locomotive model. A total of two sets, four units, were built by Kawasaki Heavy Industries. The mission of the Class E5000 is to pull the Ooedo line trains to and from the rail yard. It happens when legal inspection of the Ooedo line train is conducted at Magome Rail Yard on the Asakusa line.

I enjoyed both the beautiful plum garden and the lovely locomotives on the weekend. 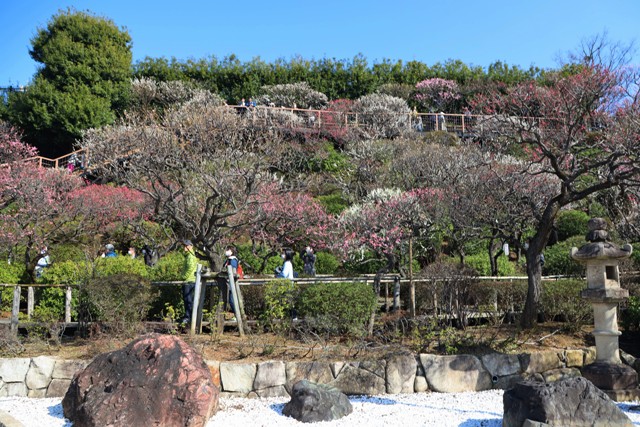