Winter Illumination on the Izukyu Line 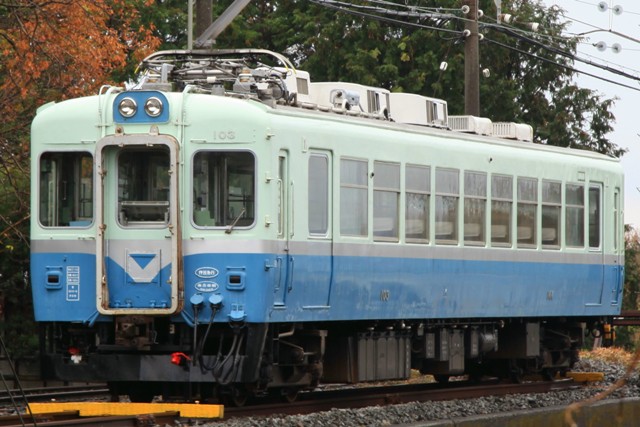 This winter, I visited Izu Granpal Amusement Park to see its popular illumination event named "Granillumi". The park was ornamented with a total of 6 million LED lights. The most distinctive feature is the zip line passing above the illumination. Visitors can take a 400-meter trip glide above the illumination site. They can become a "meteor" during traveling this zip line.

To visit Izu Granpal Amusement Park, the nearest station is Izu-kogen on the Izukyu line. Before visiting the event site, I stopped by the Izu-kogen rail yard to take a photo of the old electric car, KuMoHa 103 of the 100 series. The 100 series was launched in 1961 when the Izukyu line was inaugurated. Since then, the 100 series had been functioned as the main fleet of this sightseeing railway on Izu Peninsula, but it was retired from the track by 2002. Only one unit, namely KuMoHa 103, survived as a yard-track shunting car. KuMoHa 103 once faced extinction because it became deteriorated, but Izukyu eventually preserved KuMoHa 103 as a special event car in 2012. Currently, we can rent it as a special train on the main track.

I enjoyed both beautiful illuminations and a historic electric car on Izu Peninsula. 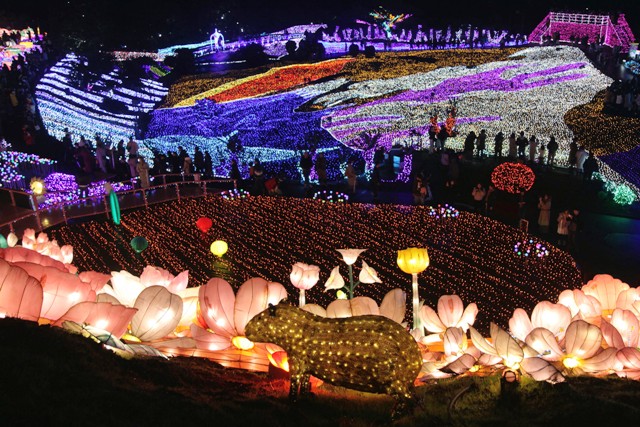 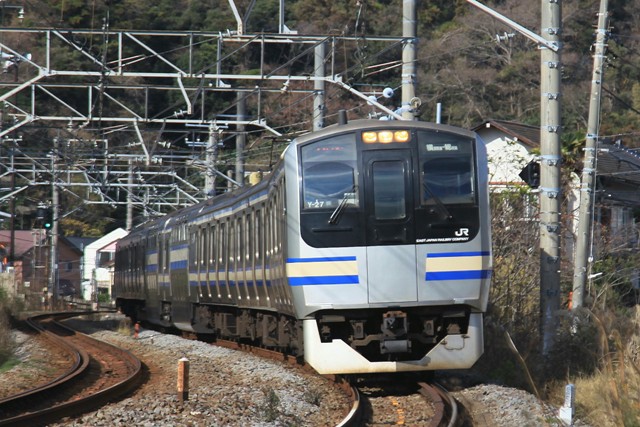 I visited Kamakura with my family again. It was the first time in almost one year. Kamakura, about 40 kilometers south of Tokyo, is known as a historic city where the Bakufu (Shogunate government) was located from 1185 to 1333. We visited Jufukuji temple, about a 10 minute walk from Kamakura station. Although it was the weekend, the precinct of the temple was very quiet. We fully enjoyed the peaceful atmosphere and the evergreen trees in the temple.

To visit the city of Kamakura from Tokyo, the JR East Yokosuka line is convenient. The EMU E217 series is the main fleet on the line. The E217 series was launched in 1994 to replace the old EMU 113 series. It is a typical commuter train with eight doors per unit. It is equipped with long seats, but cross seats are also allocated for long distance passengers in several cars. Most trains are directly operated onto the Sobu line via Tokyo station.

I have to keep an eye on the city of Kamakura... both the places of interest and the trains. 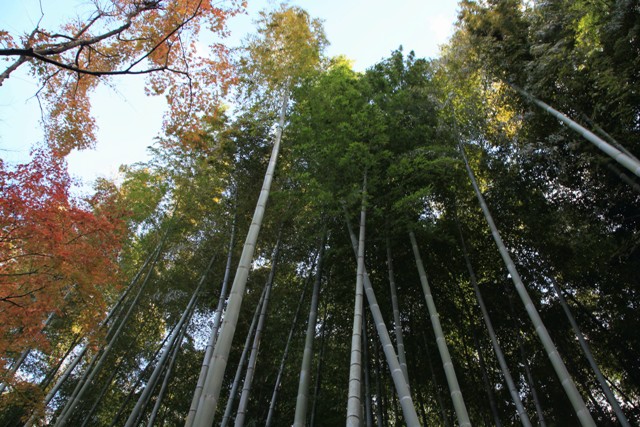 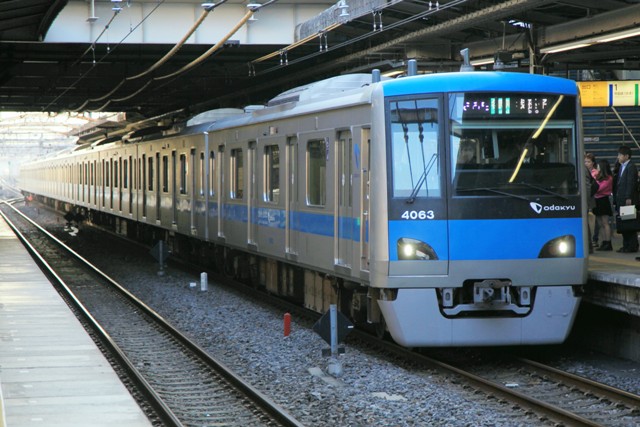 It is late-December already. Autumn has gone and winter is here in the Tokyo metropolitan area. Before the New Year, I am going to hurry and show you the topic of this autumn.

Matsudo is a commuter city in Chiba Prefecture. I visited it with my family last month for the first time in one year and a half. Last time, we enjoyed walking along Edo River and saw a beautiful corn poppy field. This time, our purpose of the visit was touching upon the local history of the city of Matsudo.

Our destination was Tojo-tei on a small hill. It was a large house originally owned by Akitake Tokugawa, who was the younger brother of the last shogun in the Edo Period. The Tokugawa family ruled Japan over a period of 264 years until 1867. After the establishment of the Meiji Government, Akitake retired and lived in Tojo-tei House. The last shogun Yoshinobu often visited him. We saw a well maintained traditional house currently owned by the city of Matsudo. It was good timing because the chrysanthemum show was being held by the local people.

To visit this historical house, the nearest station is Matsudo on the JR East Joban Line. Since we live in the western part of Tokyo on the Odakyu line, Matsudo looks far from our home; but it was not necessarily true. Odakyu frequently operates direct trains onto the Joban line via the Tokyo Metro Chiyoda line. It takes just one hour from our nearest station to Matsudo. 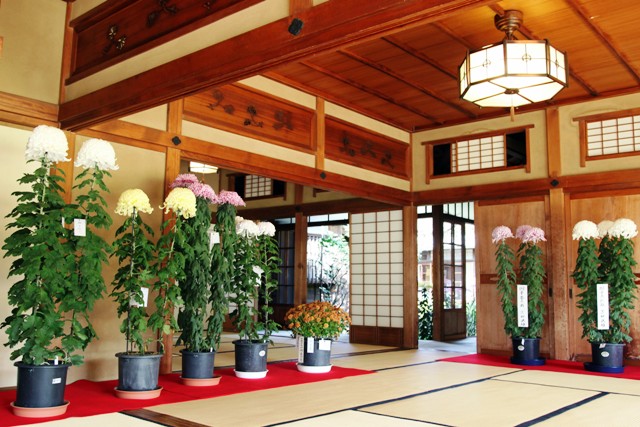 Autumn Colors on the Osaka Line 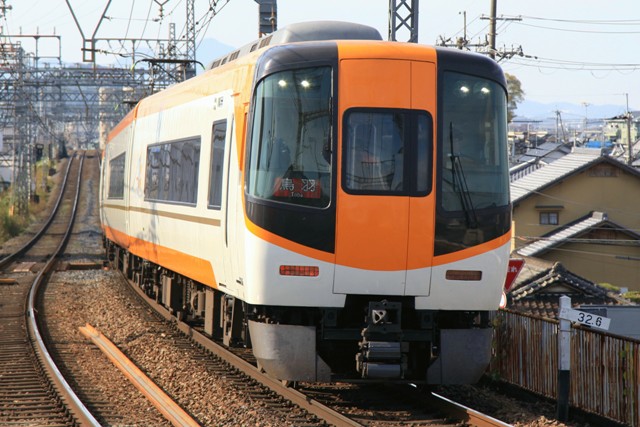 Sakurai is a small city located in the central part of Nara Prefecture. It is said that this city was the capital of ancient Japan in the 3rd century. Hashihaka Tumulus, which was found in the city, is likely the tomb of Himiko, who was the queen of ancient Japan at that time.

In addition to the history, Sakurai is also famous for its beautiful nature. For example, the autumn colors of the Tanzan Shine is popular among tourists. The mountain around the shrine glows red in mid-November. It goes well with the thirteen-story pagoda in the shrine.

To visit Tanzan Shrine, the nearest station is Sakurai on the Kintetsu Osaka line. When I was waiting for a local train on the platform, I came across a limited express train passing through the station. It was the EMU 22000 series bound for Toba. The 22000 series is the major model of the Kintetsu limited express fleet for the standard gauge (1,435 mm-wide gauge) track. It was launched in 1992 to replace the old models such as the 10400 and the 11400 series.

The rounded frontal mask is cute and is my favorite. Same as the EMU 30000 series, I found that the coloring design of the 22000 series was not what it used to be five years ago. The body stripes were changed from ultramarine to gold colors. It was elegant and my cup of tea. Regarding the interior, I like its footrest in front of the comfortable reclining seat. 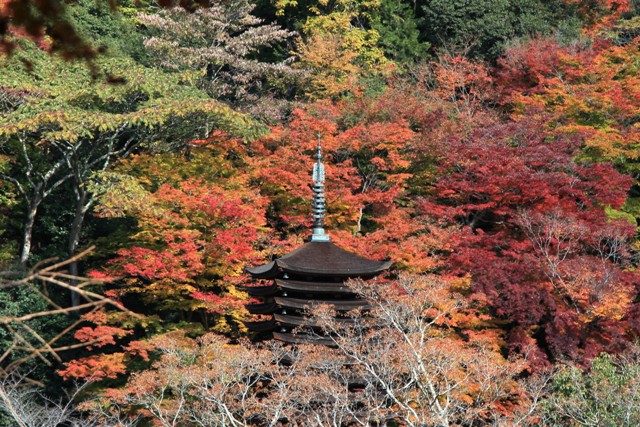 Official information about the Kintetsu limited express, the EMU 22000 series (in Japanese):
https://www.kintetsu.co.jp/gyoumu/Express/train/bisuta.html#regular
Labels: Outside Tokyo 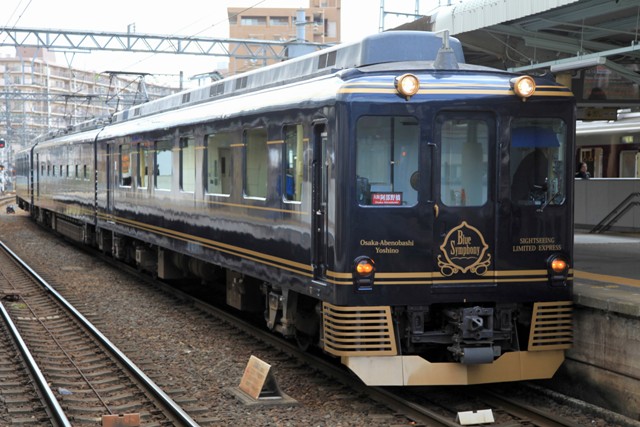 Yoshino is a mountainous area located in the southern part of Nara Prefecture. It is known as a holy place for Shugendo, which is Japanese mountain asceticism-shamanism incorporating Shinto and Buddhist concepts. Kimpusenji temple, which was opened by En-no-ozuno in the 7th century, is the very center of Shugendo. Currently, the function of Yoshino is not only Shugendo, but also sightseeing. For instance, Yoshino is famous for its sakura (cherry) blossoms in spring. The autumn color is also very beautiful. When we visited there last month, we could see red-colored maple trees here and there. It was vivid backed by the blue sky.

To get to Yoshino Mountain, the Kintetsu Yoshino line is convenient. Kintetsu is Japan's largest private railway company, which has a 508.2-kilometer network. The Yoshino line is a 25.2-kilometer local route connecting Kashiharajingu-mae and Yoshino stations. Different from the other Kintetsu lines, the track gauge size of the Yoshino and the Minami-Osaka lines is 1,067 millimeters.

When we were waiting for the Yoshino line train at Kashihara-jingumae station, I came across a limited express, the EMU 16200 series named Blue Symphony. It is a sightseeing train operated between Osaka-Abenobashi on the Minami-Osaka line and Yoshino station. Blue Symphony was renovated from the EMU 6200 series in 2016. It is composed of three cars including one lounge car, which functions as a bar and a cafe. Two passenger cars have gorgeous classic designed seats. The extra cost for boarding this train is 720 yen per passenger. 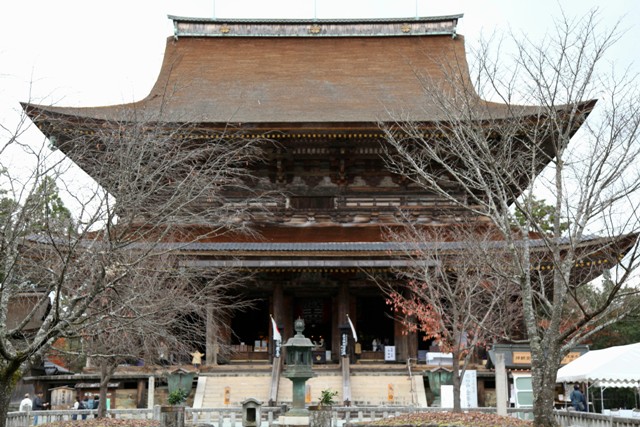 Jizo-do (the main hall) in Kimpusenji temple near Yoshino station

City of Deer: Revisit to Nara 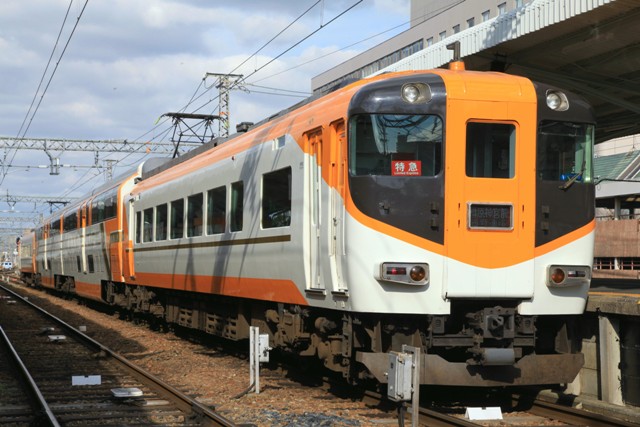 I visited Nara City with my family for the first time in five years. Nara is the main city in Nara Prefecture, some 550 kilometers west of Tokyo. It was Japan's capital from 710 to 784. The ancient capital, named Heijo-kyo, was located west of the present downtown area in Nara City. It was a preplanned city with checkerboard streets.

What was new with this historical city? Firstly, there were a lot of foreign tourists visiting the city. The same as Mt. Fuji, the number of foreign visitors to Nara has obviously increased in recent years. We could hear many kinds of foreign languages in the city. Secondly, we found a procession of wild deer in the downtown area in the early morning. They appeared one after another, and headed to the public park perhaps to have breakfast. We saw a precious scene. An early bird catches the worm, doesn't it?

To get to Nara, we rode Kintetsu's limited express train, Vista-EX (the EMU 30000 series), from Kashihara-jingumae to Yamato-Saidaiji station. We reserved seats on the second floor of the bi-level car in advance. It was the right decision to enjoy the scenery of countryside through the windows. Before boarding the train, I found that the coloring design of Vista-EX was not what it used to be five years ago. The body stripes were changed from ultramarine to gold colors. The new design was definitely my cup of tea. 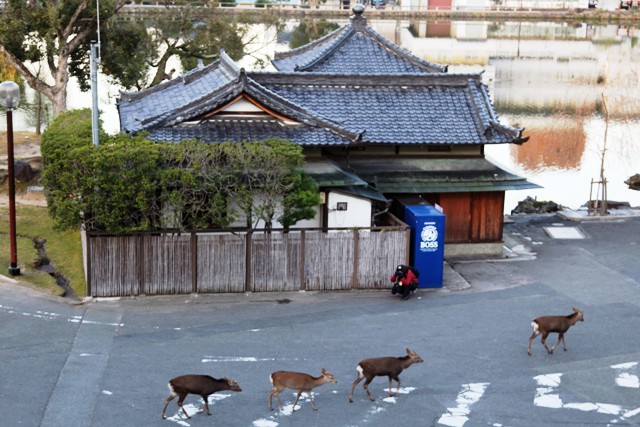