My blog recently had its tenth anniversary. I thank all my blog readers for visiting this website over the last ten years. I receive many emails from my blog readers, but sorry, I can't reply enough, because I still have lots of work to do. Please wait until I can make time. In Japan, there is the saying, "Ten years ago seems like ancient history". As this implies, if you review my posts of the year 2011, you will find many trains, which had already been retired from the tracks.

In commemoration of the tenth anniversary, I'm going to show you a railway line with the number "10" in the name.Subway Line 10 in Tokyo is generally called the Toei-Shinjuku line. It's operated by the Transportation Bureau of Tokyo Metropolitan Government (Toei). The Toei-Shinjuku line was opened in 1978 as the 3rd Toei's subway route. Connecting Shinjuku and Motoyawata, the total operating length is 23.5 kilometers. The trains are directly operated onto the Keio line via Shinjuku station. 790,000 passengers take this route each day. To operate this urban trunk line, three kinds of trains are commissioned. They are the EMU Toei 10-300, the Keio 5000 and the Keio 9000 series.

Where do you see Subway Line 10 in the next 10 years? I predict that a gorgeous train will be operated between Toei's Motoyawata and Keio's Hashimoto stations. This train will transport interline passengers to the Tokaido magnetic levitation railway being constructed by JR Central.

Blue Thunder on the Chuo Line

I recently visited Tachikawa City in Tokyo Metropolis, as something came up. After finishing my meeting, I stopped by JR East Tachikawa station in the evening to see trains arriving at and leaving the station on my way back home. I came across a freight train pulled by an electric locomotive (EL) in the station yard. It was an oil transportation train on the JR East Chuo line. The EL was the Class EH200 operated by JR Freight.
The Class EH200 was commissioned in 2001 to replace the old EL, Class EF64. 25 units in total were built by Toshiba from 2001 to 2011. It's operated on the 1,067mm gauge tracks with a 1,500 V DC electric system. Being coupled two units, the UIC indication of a wheel arrangement for the EH200 is (Bo - Bo) + (Bo - Bo). It has eight 565 kW induction motors with an IGBT - VVVF inverter (Insulated Gate Bipolar Transistor - variable frequency drive) control system.
Oil transportation is one of Class EH200's important assignments. The EH200 is suitable for tracks in the mountainous area, as it's a powerful EL. Pulling the Class TaKi1000 oil tank cars, its maximum speed is 95 kilometers per hour on the steep tracks of the Chuo Line. The nickname is "Blue Thunder", which was chosen by the public. It's named after its body color and high performance.
The train pulled by the Class EH200 soon left Tachikawa station, and headed west to deliver petrol to the inland areas. 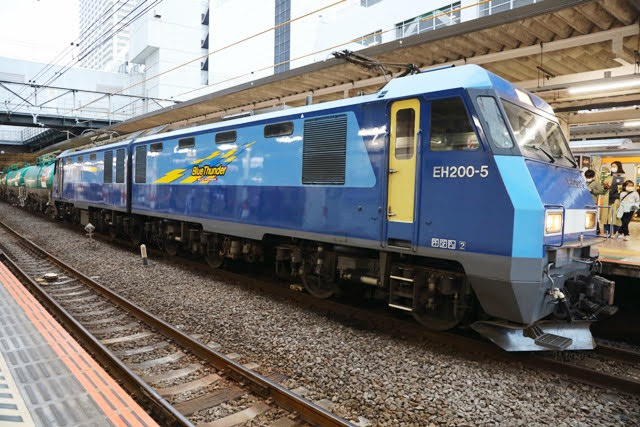 Side view of the EL JRF Class EH200
Labels: Locomotive

The JR East Yokosuka-Sobu rapid line is a busy commuter route in the Tokyo metropolitan area. A 15-car train with an overall length of 300 meters runs every four minutes in the morning. On December 21st, 2020, JR East launched a new EMU model, E235-1000 series, on the line. Introduction of the new model was for the first time in 26 years. 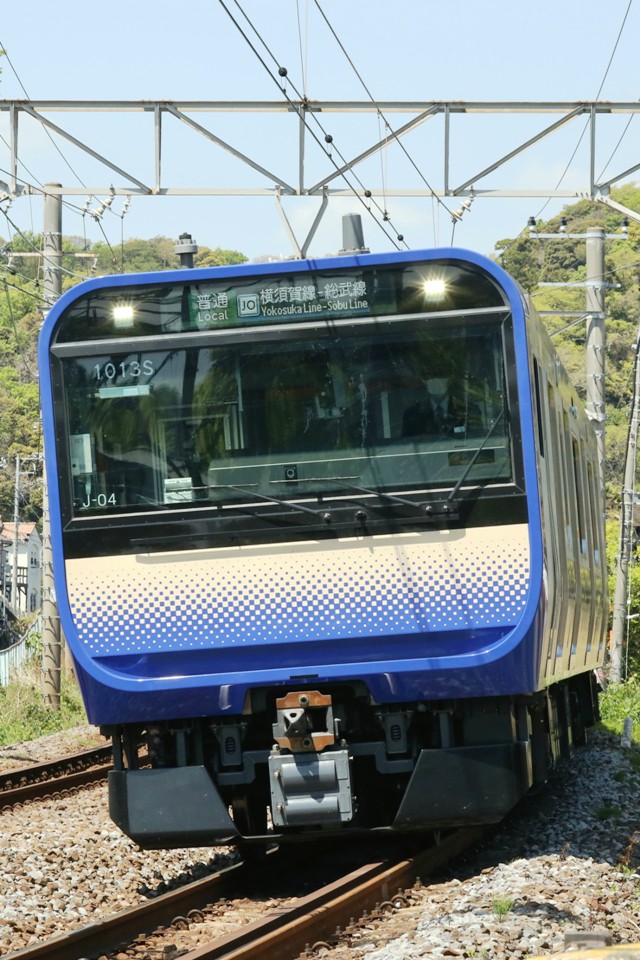 Omiya Park on the Saikyo Line

The weather forecast everyday informs us where the "front line" of the sakura (cherry blossoms) is. Although the sakura blooming season has passed in Tokyo, the front line is still traveling up the northern part of Japan. A person traveling to the north with the "sakura front" would be able to enjoy the blossoms for nearly three months. The sakura front travels not only to the north, but also climbs up the mountains.
Look at the following picture. Sakura is in the stage of full bloom in the mountainous Nirasaki province of Yamanshi Prefecture, about 150 kilometers west of Tokyo. Wani-zuka (Wani mound) is one of the famous sakura viewing spots there. My favorite tree is an Edo-hikan-sakura, which is over 330 years old. I enjoyed a glamorous looks tree, which ruled visitors' hearts, there. I also found many visitors enjoying this sakura standing in a circle around the tree.
To visit this gorgeous spot, the nearest railway station is Nirasaki on the JR East Chuo line. I used a limited express train, Azusa, the EMU E353 series, from Shinjuku terminal. The E353 series was launched in 2017 to replace the old limited express train, the E351 series. It has a special air suspension type tilting system to pass through tight curves in the mountain areas keeping at high speed. The maximum operating speed of the E353 series is 130 kilometers per hour.
I enjoyed the old sakura tree and the state-of-the-art limited express train on the weekend.
Labels: JR East

I'm going to show you the other sakura (cherry) viewing spot in Tokyo. It's Inokashira Park near Inokashira-koen station on the Keio-Inokashira line. At the end of last month, I found many full-blown cherry trees around the pond in the park. Although we were prohibited to hold parties under the sakura trees due to new coronavirus infection risks, I could at least enjoy walking in the park with my family. Spring was here.

Incidentally, the Inokashira line is Keio's short commuter route connecting Shibuya and Kichijoji. Its line length is 12.7 kilometers. The track is 1,067 mm-size double. The electric system is 1,500 V DC overhead. The EMU 1000 series is the sole model on the line. The commercial operation of the 1000 series started in 1996, as the first 20-meters long body train on the line. One set is composed of three motorcars and two trailers (3M2T).

Taking this opportunity, I'm going to introduce a rare train on the Inokashira line. It's set number 1729 of the EMU 1000 series. This unique set has a white colored front mask with a rainbow-colored stripe on the side body of the train. Set 1729 was built by Tokyu Sharyo in 2009. The original front color was bluish green, but, was changed to white in 2012 to make it be a flagship train on the Inokashira line. Designed posters of several scenic spots on the line, such as Inokashira Park and Kanda River, are displayed on the body of this train.

On March 14th, the Meteorological Agency of Japan declared that sakura (cherry) blossoms had started blooming in Tokyo. It was the earliest record in history. The agency then reported that they fully blossomed on March 22nd. As I post year after year, Japanese people harbor romantic emotions towards cherry blossoms. We are also reminded of the emptiness of life seeing the beautiful blossoms dropping only a week after they fully blossom. Cherry viewing is a part of Japanese culture.

The other day, I went for a stroll around the office during my lunch time break. My favorite area to walk is around the Imperial Palace, where we can enjoy full-blown trees. I found many female students who have just graduated from a university. They put on colorful "hakama" to graduation ceremonies, and took memorial photos of each other under the cherry trees. Hakama is a traditional Japanese clothing, much like kimono; however, hakama have pleated trousers, instead of one long cloth like a kimono. Congratulations on your graduation!

To visit this cherry viewing spot, the nearest station is Kudanshita on the subway Tokyo Metro Tozai line. Taking this opportunity, I'm going to introduce the EMU 15000 series operated on the line. The 15000 series debuted in 2010 to replace the old EMU 05 series. 16 sets, 160 cars in total, were built by Hitachi Kasado Factory. The most distinctive feature of this commuter train is its wide doors, which enable the safe and smooth boarding of passengers during the rush hour. 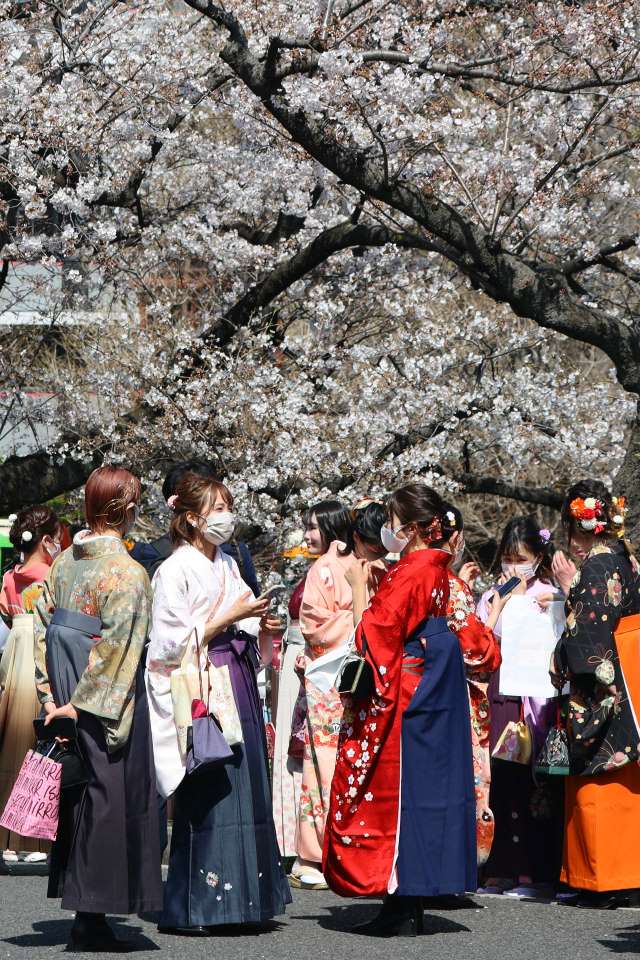