I'm going to show you the other sakura (cherry) viewing spot in Tokyo. It's Inokashira Park near Inokashira-koen station on the Keio-Inokashira line. At the end of last month, I found many full-blown cherry trees around the pond in the park. Although we were prohibited to hold parties under the sakura trees due to new coronavirus infection risks, I could at least enjoy walking in the park with my family. Spring was here.

Incidentally, the Inokashira line is Keio's short commuter route connecting Shibuya and Kichijoji. Its line length is 12.7 kilometers. The track is 1,067 mm-size double. The electric system is 1,500 V DC overhead. The EMU 1000 series is the sole model on the line. The commercial operation of the 1000 series started in 1996, as the first 20-meters long body train on the line. One set is composed of three motorcars and two trailers (3M2T).

Taking this opportunity, I'm going to introduce a rare train on the Inokashira line. It's set number 1729 of the EMU 1000 series. This unique set has a white colored front mask with a rainbow-colored stripe on the side body of the train. Set 1729 was built by Tokyu Sharyo in 2009. The original front color was bluish green, but, was changed to white in 2012 to make it be a flagship train on the Inokashira line. Designed posters of several scenic spots on the line, such as Inokashira Park and Kanda River, are displayed on the body of this train. 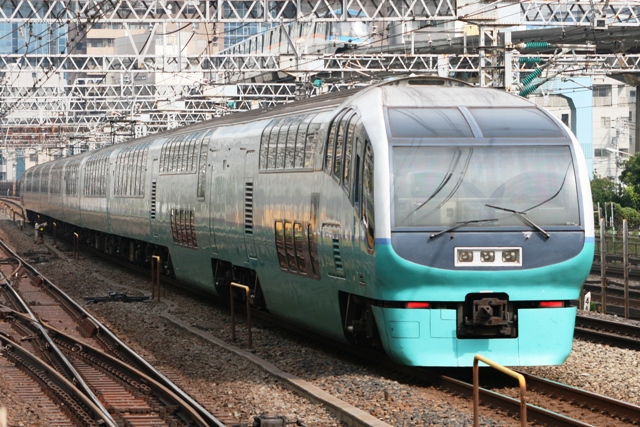