I came across a limited express train, Super-Hakuto, at Kyoto station in November. Super-Hakuto is Chizu Express Railway's flagship model named DMU HOT 7000 series. Connecting Tottori, Kurayoshi and Kyoto, it's directly operated onto the JR West lines. The track of Chizu Express Railway is single and non-electrified. The most distinctive feature of this railway is the trans-mountain route penetrating the Chugoku Mountains. In other words, it's a bridge-tunnel railway, which connects cities located on the Sea of Japan and Seto Inland Sea.
In response to this situation, the HOT 7000 series has an excellent curve passage performance. By tilting the train's body using pendular technology, it can keep a high speed on tight curves. The maximum speed of the HOT 7000 series is 130 kilometers per hour. The HOT 7000 series was commissioned in 1994. 34 cars were built by Fuji Heavy Industries. It has blue colored stainless-steel bodies. Each car has two sets of Komatsu's 355 PS per 2,000 rpm diesel engines. The streamlined frontal design is definitely my favorite. A TV camera is equipped in the cockpit and there is a monitor in each cabin to see the frontal view. It's a good passenger service for rail fans like me.
On February 21st, 2019, Chizu Express Railway announced their mid-term business plan, in which the company plans to introduce a new model for Super-Hakuto. According to media, the new model will be launched in 2024. The final chapter of the DMU HOT 7000 series has just begun.
Labels: Outside Tokyo, SME

Goodbye to the Sotetsu New 7000 Series 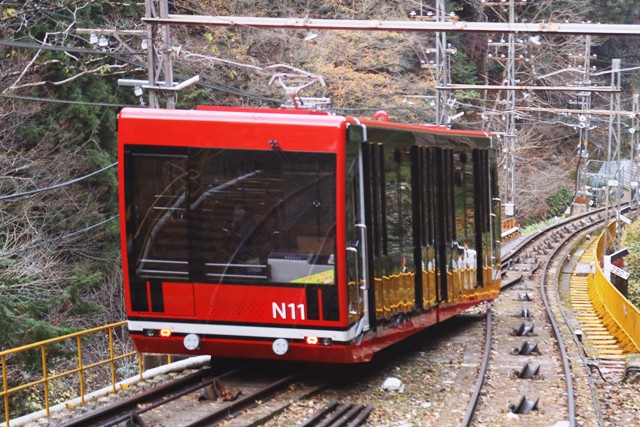 Funicular, Nankai N11-N21, travels on the Koya-san Cable line
Following my last post, I'm going to continue to show you the access route to Koya-san in Wakayama Prefecture.
After getting off the limited express train, Koya, at Gokurakubashi terminal, I transferred to the funicular line named Koya-san Cable of Nankai Electric Railway. The Koya-san Cable line was opened in 1930 by Koya-san Electric Railway Company. Connecting Gokurakubashi and Koya-san stations, its route length is 864 meters. The track gauge size is 1,067 mm. The maximum inclination of the route is 29.21 degrees. The height difference between the lowest and the highest points on the route is 328 meters. The operation interval is 10 to 40 minutes depending on the crowd. It takes 5 minutes from Gokurakubashi to Koya-san station.
The vehicles are fourth generation ones. They were built by Nippon Cable in 2019 and the aluminum bodies were made by CWA in Switzerland. One set is composed of two cars named Type N10 and Type N20. Two sets (N11-N21 and N12-N22) are operated on the line. Thanks to the mass transit vehicles, one train can accommodate 211 passengers. It's a powerful climber. The bodies are vivid vermillion-colored and streamlined. On the contrary, the interior is a woody style and subdued. Indirect illumination using LEDs is adopted. I really liked this train.
After arriving at Koya-san terminal, I visited a sub-temple of Koya-san and stayed there with my family. When I saw the traditional garden, I felt refreshed and found my worries were almost nothing. I felt rejuvenated in Koya-san. 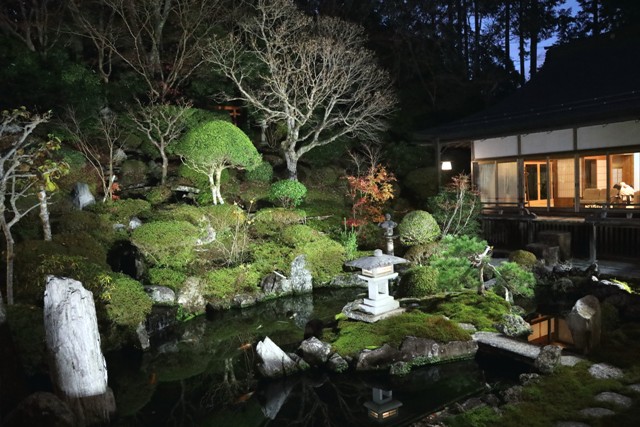 Powerful Climber to the Holy Mountain

Koya-san is the common name of Buddhist temple settlement in Wakayama Prefecture, about 620 kilometers southwest of Tokyo. It was opened by a monk, Kukai, in 819 as the headquarters of the Koyasan Shingon sect of Japanese Buddhism. Located on an 800-meter high mountain, there are 120 temples. Many of which offer lodgings to pilgrims and tourists. Konpon Daito, the Basic Great Pagoda, is the main tower of Koyasan Shingon Buddhism doctrine. It's a 48.5 meters tall vermillion colored beautiful pagoda. Koya-san was designated as a UNESCO World Heritage site in 2004.
To visit this holy mountain, please take the Nankai-Koya line and get off at Gokurakubashi terminal. Nankai is a major private railway company in the Osaka area. The route extends to the southern part of Osaka and northern Wakayama Prefecture. The electric system is 1,500 V DC overhead. The gauge size is 1,067 millimeters. The track is double between Shiomibashi and Hashimoto and single between Hashimoto and Gokurakubashi.
The EMU 30000 series is the flagship train on the Koya line. It was commissioned in 1983 as limited express train, Koya. Two sets of 4-car trains were built by Tokyu Sharyo. Each set is composed of four motorcars. Trailers are not connected because a powerful EMU is required to climb a maximum inclination of 50 per mil slope on the section between Hashimoto and Gokurakubashi. The technical specification of the 30000 series is rather old. It still has a traditional rheostatic electric control system. To be continued... 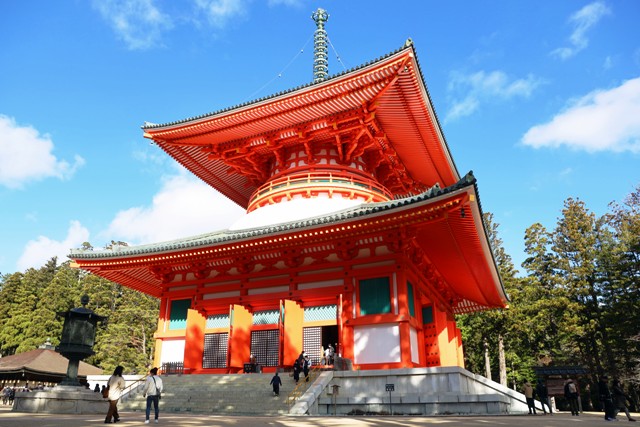 Matcha Train on the Kosei Line 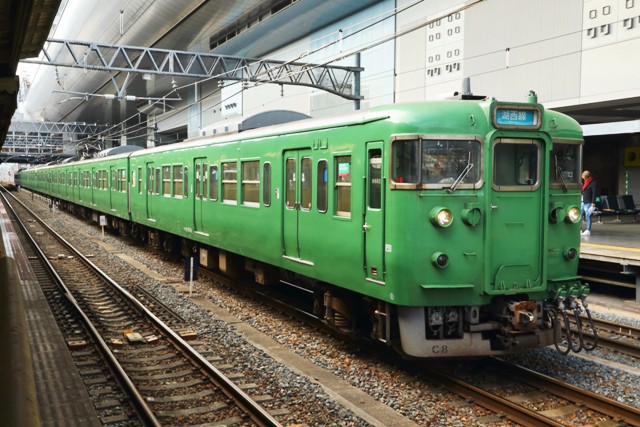 EMU JR West 113 series, "Matcha color", stabds at Kyoto station yard
JR West's Kosei line is a railway route along the west coast of Japan's largest lake, "Biwa-ko". Connecting Yamashina on the Tokaido main line and Ohmi-Shiotsu on the Hokuriku main line, the route length is 74.1 kilometers. The track is double and the electric system is 1,500 V DC overhead. It was constructed as a bypass route between Osaka and the Hokuriku area (Japan Sea side). Most trains are directly operated onto the Tokaido main line and/or the Hokuriku main line.
A local train on the Kosei line is unique and worthy of attention. It's an old EMU, JR West 113 series. Railfans call it the matcha-colored train. Matcha is a kind of tea made by adding hot water to powdered green tea leaves, and rapidly beating it with a bamboo whisk. It's served to guests at the tea ceremony.
The 113 series was launched in 1963 by the Japanese National Railways. A total of 2,977 cars were built by Nippon-sharyo, Kawasaki-sharyo and the others between 1963 and 1983. Although 57 years have already passed since it debuted, 16 sets (64 cars) are still operated on the Kosei line. All trains belong to Kyoto Branch Office of JR West's Suita Railyard.
Technical specification of the 113 series is rather old. It has a classic rheostatic electric control system with DC motors, but it's still operated without serious problems. The 113 series train is very tough. Many railfans believe that it will be operated until the late 2020's. 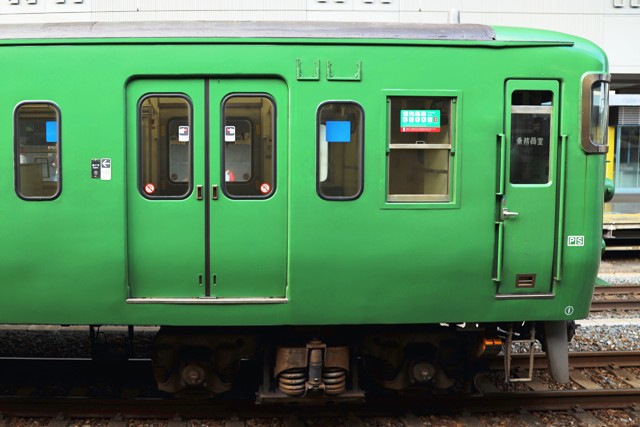 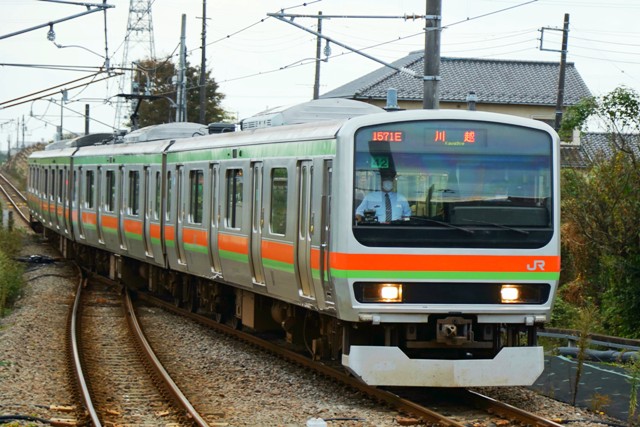 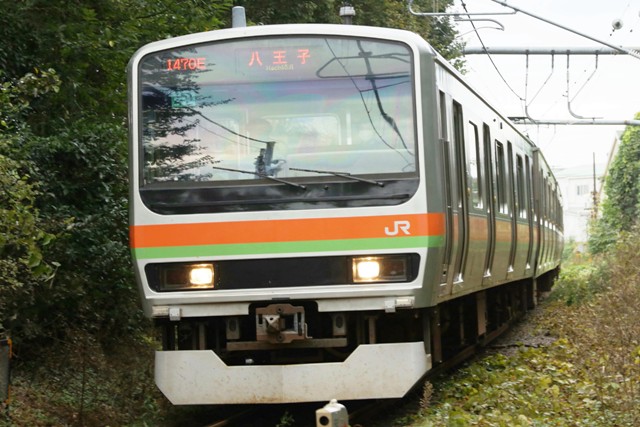 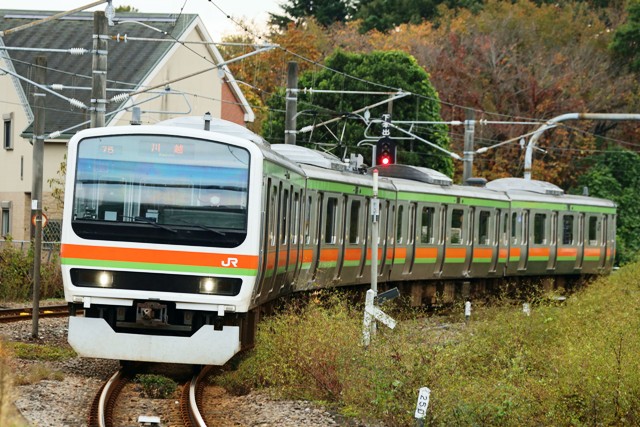 I recently visited the JR East Hachiko line for the first time in three years. What was new with this local line in the western part of the Tokyo metropolitan area?

On the other hand, a new model named the 209-3500 series was introduced to the Hachiko line in May, 2018. This model was originally operated on the Sobu-Chuo local line under the name of the 209-500 series, but transferred to the Hachiko line after several modifications. This transfer was originally caused by the introduction of the new model, the E235 series, onto the Yamanote line in the downtown Tokyo area. 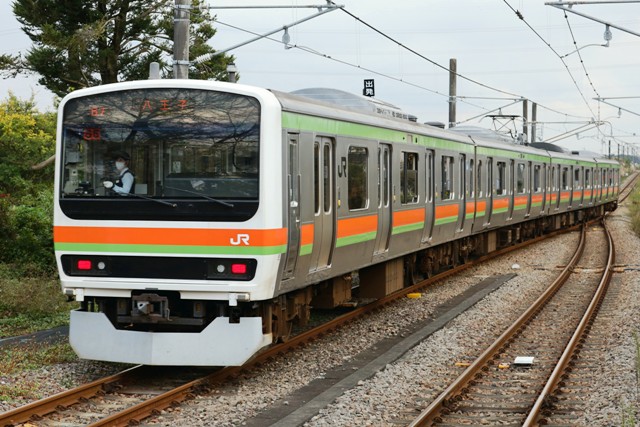