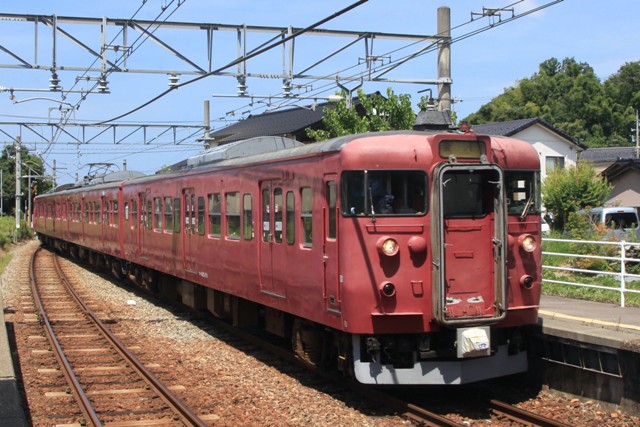 After arriving at Kanazawa station, we changed trains and headed north. Our destination was Hakui City located at the root of Noto Peninsula.

Although Hakui is just a small local city, there is a large space museum named "Cosmo Isle Hakui" near the railway station. The exhibitions are gorgeous and unique. For instance, we can see the genuine Vostok, a former Soviet spacecraft. We found numerous burns on the surface of the spacecraft, which were created as the spacecraft reentered the atmosphere. The American exploration vehicle Luna/Mars Rover was also exhibited. It was a prototype, but also genuine. Hakui is a formidable city, isn't it?

To get to Hakui, IR Ishikawa Railway (IR) and the JR West Nanao line are convenient. Approximately half of all IR trains are operated directly onto the Nanao line. It takes about one hour by local train. We got on a red-colored, old train named the EMU JR West 415-800 series, which was launched in 1971 by Japanese National Railways. The 415 series has an alternate current (AC) - direct current (DC) dual electric system, since AC and DC tracks are mixed in the area. The AC system is 20,000 V with 50 and 60 hertz, and the DC system is 1,500 V. The red colored bodies are designed to look like Wajima-nuri, which is a traditional local lacquer. For your information, the 415 series trains are also seen in other areas of Japan such as Kyushu Island. 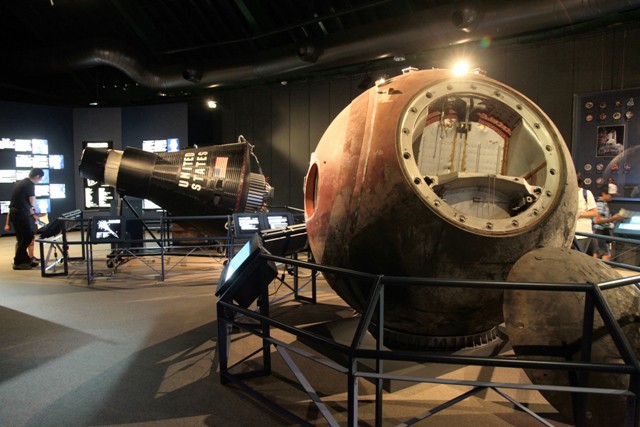 It was hot again this summer in Japan. I was very busy at work, but could manage to take a 2-day holiday in the middle of August. I visited Ishikawa Prefecture in the Hokuriku area with my family. The main city in Ishikawa Prefecture is Kanazawa, which is located about 450 kilometers northwest of Tokyo.

The gateway station to Kanazawa City is also Kanazawa. JR West Hokuriku Shinkansen, the Hokuriku main line, IR Ishikawa Railway and Hokuriku Railway trains stop at the station. It took just two and a half hours by Kagayaki (brilliance) super-express on Hokuriku Shinkansen from Tokyo. The trains are the EMU W7 and E7 series. They have same technical specifications, but the W7 series belongs to JR West; meanwhile, the E7 series belongs to JR East. The E7 series was launched in 2014 as a Nagano Shinkansen train; meanwhile, the W7 series newly debuted at the timing of inauguration of Hokuriku Shinkansen in 2015. The maximum speed is only 260 kilometers per hour, but they can climb up the Usui Pass (a steep incline of 30 per mil) at a speed of 210 kilometers per hour. A total of 33 sets, 396 units were built by Kawasaki Heavy Industries and the others.

After getting off the super-express train, we firstly saw Tsuzumi-mon (Hand drum gate), which is a symbol of Kanazawa station. It is said that the gate represents local people's hospitality and art-loving personality. 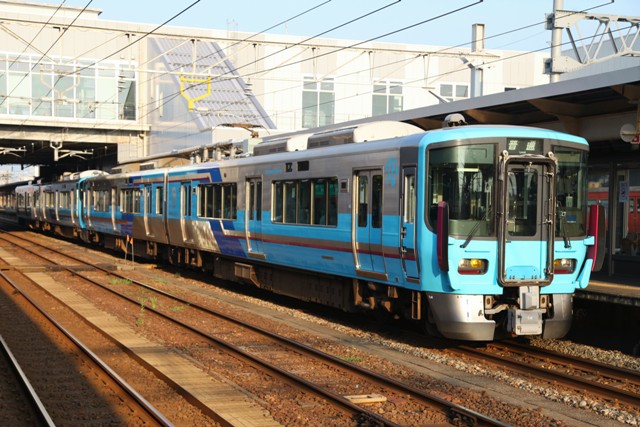 It's fun to travel for everybody, but it will be more fun if you are a rail fan. For instance, tourists can enjoy beautiful coastal scenery and delicious seafood in the Hokuriku area, but you will also enjoy local railways and trains there, if you are a rail fan. That's unique to rail fans all over the world.

The EMU 521 series is a local train model in the Hokuriku area, which is located in the central part of the Sea of Japan side. It was originally launched by JR West in 2006, and, then, belongs to IR Ishikawa and Ainokaze Toyama railways as well. A total of 144 units were built by Kawasaki Heavy Industries and Kinki Sharyo.

The 521 series has an alternate current (AC) - direct current (DC) dual electric system, since AC and DC tracks are mixed in the area. It is quite unique and makes the train system complicated. The AC system is 20,000 V with 60 Hz; meanwhile, the DC system is 1,500V. One set is composed of two cars. They are one motor car and one trailer (1M1T). Its maximum speed is 120 kilometers per hour.

The outer design of the 521 series is similar with that of the other JR West trains in the Osaka area such as the EMU 223 series and the KiHa 127 series. Their faces have four square lights, two large windows and a gangway. I never get weary of looking at this design. 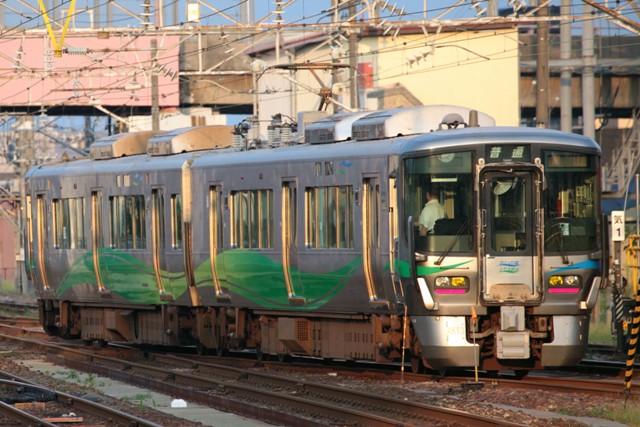 Good-bye to the Tokyu 8500 Series on the Oimachi Line 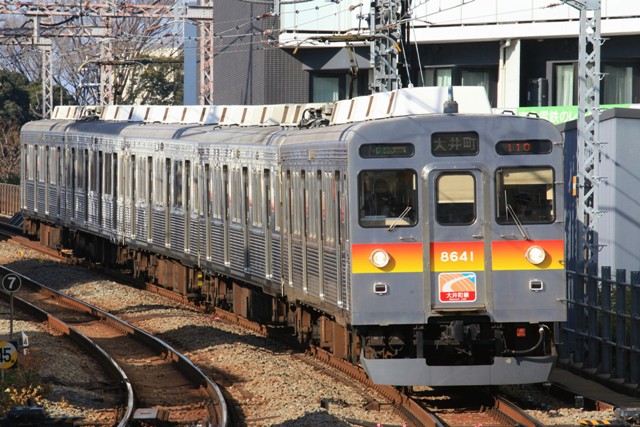 A long-lived train, the EMU Tokyu 8500 series, was eventually retired from the Tokyu Oimachi line on April 5th this year. I have now realized that one era is coming to a close.

The 8500 series was launched in 1975, when the Tokyu Den-en-toshi line trains started to be directly operated onto the subway Hanzomon line. It was, then, introduced onto the Oimachi line as well in 1986. A total of 400 units were built by Tokyu Sharyo.

The electric motor of the 8500 series was traditional direct current compound (130 kW) and the electric control system was old field chopper. The stainless-steel bodies with corrugated structures were old-fashioned, but very stout and trouble-proof. The growling running sound of the 8500 series was very nostalgic and definitely my favorite. It was exactly the sound of trains in the 1970's.

After retirement from the Oimachi line, the 8500 series became an endangered species of trains. Few units of them are only operated on the Tokyu Den-en-toshi line, Chichibu Railway, Nagano Electric Railway and the commuter lines in Jakarta, Indonesia. Please hurry up and take their photos before it is too late! 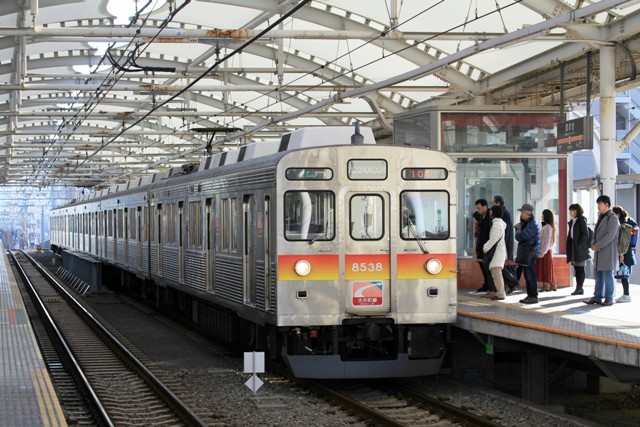 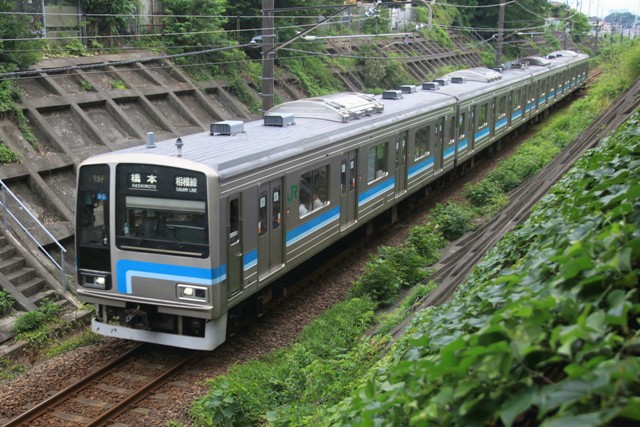 I have recently visited the JR East Sagami line for the first time in three years. The Sagami line penetrates the western part of Kanagawa Prefecture from north to south. Connecting Hashimoto and Chigasaki stations, its total length is 33.3 kilometers. The entire route is electrified and single. The electric system is 1,500 V DC overhead. 4-car trains named the EMU 205-500 series are operated every 20 minutes on average.

What was new with this local line? I found that there were subtle differences in the body stripe colors among the EMU 205-500 series. Some sets had a blue-green stripe; meanwhile, the other sets had a simple blue stripe. Which is the newer? The answer is the latter one (simple blue stripe). I am very happy to perceive this kind of fine difference among the trains as a trainspotter. Trainspotters are easy-going people, aren't they?

Incidentally, the EMU 205-500 series was launched in 1991, when the route was electrified. A total of 13 sets, 52 units were built by Tokyu Sharyo and JR East Ofuna Factory. Its technical specification is rather old at this distance of time, but the 205-500 series is still operated as the only model on the Sagami line. It will be replaced by a new model or the E231 series moved from the Tokaido line in the near future, but it has not been officially announced yet. I am biding my time and waiting for the official announcement by JR East. 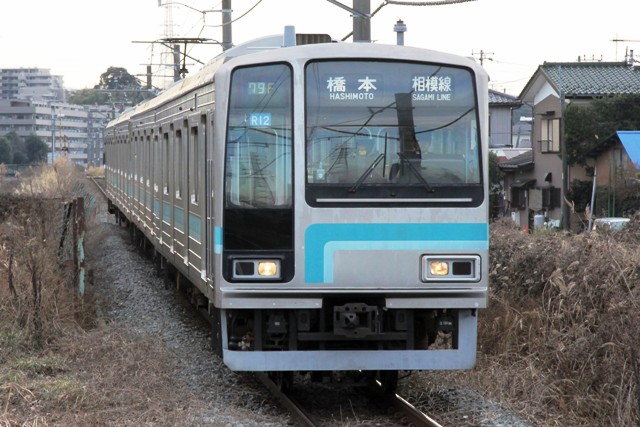 The JR East Yamanote line is well known as Japan's busiest railway. Eleven-car trains are frequently operated from early morning to midnight. The route length of the Yamanote line is 34 kilometers. It is looped through several downtown areas in the Tokyo Metropolis. The track is double so that each train runs in the same direction throughout the day; clockwise or counterclockwise. The train covers the entire route in about 60 minutes. There are 29 stations and most of them are interchanges to the subway, private railways and/or other JR lines.

The train operator, JR East, has been introducing state of the art commuter trains onto this Japan's representative urban line. The EMU E231-500 series was no exception. It was launched in 2004 in response to JR East's new train controlling system, namely the Digital Automatic Train Control (D-ATC). A total of 52 sets, 572 cars, were built by JR East Niitsu Factory. The E231-500 series once became the one and only fleet on the Yamanote line; however, the kingdom of the E231-500 series did not last long. A new model, the E235 series, debuted in 2015, and has been increasing in numbers. As a result, the older E231-500 series has been forced to move to the Sobu local line. 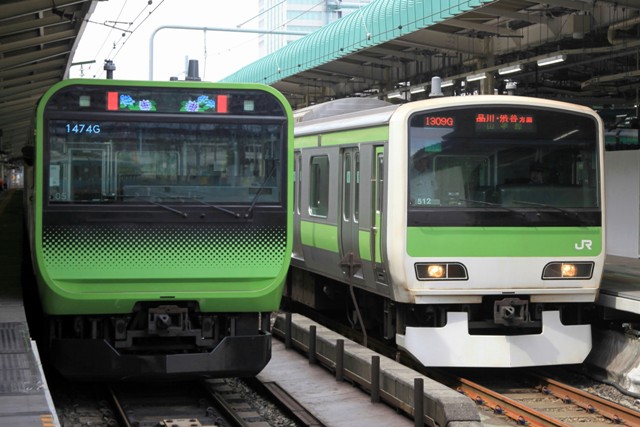