The 8500 series is an endangered species of trains on the Den-en-toshi line. Please hurry up and take their photos before it's too late!

Following the previous post, I'm going to show you the other trains on the Daiyuzan line of Izu-Hakone Railway.
Set 5503 of the EMU 5000 series is a standard-colored train. It has blue-colored stainless-steel bodies. Set 5503 was built by Tokyu Sharyo in 1987 as the third set of the 5000 series. On the other hand, set 5501 of the EMU 5000 series is a revival-colored train. It has dark rose and beige two-toned steel bodies. Set 5501 was built by Tokyu Sharyo in 1984 as the first set of the 5000 series. The original color design was white with blue stripes, but it was changed to the revival-colored design in 2016 in commemoration of the 90th anniversary of the Daiyuzan line. The revival-colored design had been used for all the trains on the Daiyuzan line until 1996. Set 5501 is currently called Akaden (red electric car) by rail-fans. Different from the other 5000 series trains, set 5501 has a motor generator instead of a static converter as an auxiliary power unit.
Here, let me summarize the last three posts. The EMU 5000 series is the sole group of passenger trains on the Daiyuzan line. Seven sets in total were built from 1984 to 1995. Set 5501 only has steel bodies; meanwhile, the other six sets have stainless-steel bodies. Regarding the color designs, set 5502, 5503, 5506 and 5507 have standard blue-colored bodies. Set 5501 has revival-colored two-toned bodies. Set 5504 has mint-colored bodies; meanwhile, set 5505 has yellow-colored ones. 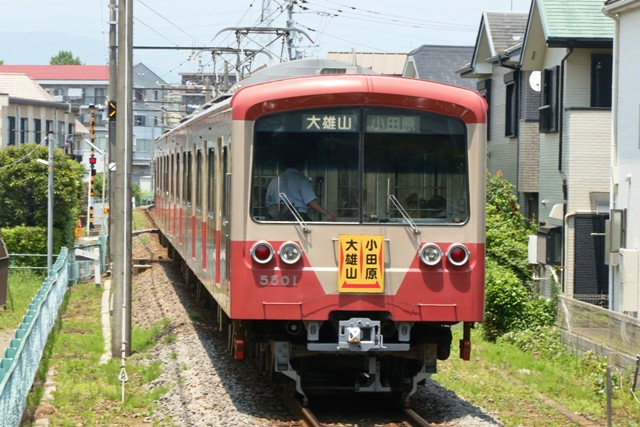 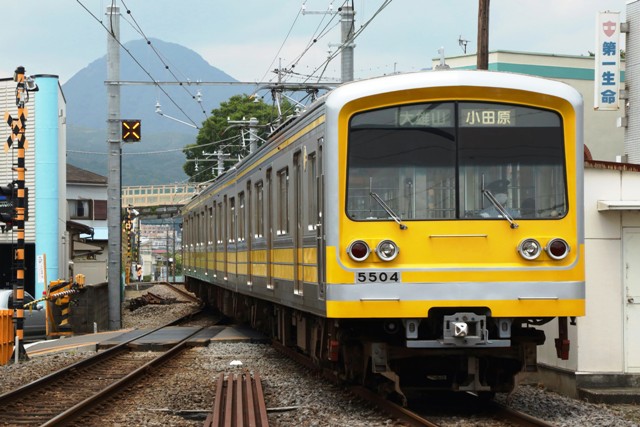 Set 5504 of the EMU Izu-Hakone 5500 series travels on the Daiyuzan line
Subsequently to Mint Spectacle Train, I'm going to show you the other special colored train, which I recently found on the Daiyuzan line of Izu-Hakone Railway.
Set 5504 of the EMU 5000 series is a unique yellow colored train on the line. I remember that set 5504 was originally a blue color train, but its body color was changed to yellow in 2019 in commemoration of the 95th anniversary of the Daiyuzan line. This new colored train was officially called Yellow Shining Train by the company. Along with Mint Spectacle Train, Yellow Shining Train is very popular among local people and rail-fans. Set 5504 was built by Tokyu Sharyo (present J-TREC) in 1989 as the fourth set of the 5000 series. It's composed of two motorcars and one trailer (2M1T). It has eight 120 kW DC motors per set with a rheostatic electric control system.
Taking this opportunity, I'm going to show you a famous sightseeing spot named Ichinoseki Harumeki-sakura near Daiyuzan station on the Daiyuzan line. It's a cherry-tree-lined long slope adjacent to the vast rice fields. Ichinoseki is a local name of the place; while Harumeki-sakura is one of the cherry species in this local area. Different from the standard cherry (Someiyoshino), the blooming season of Harumeki-sakura is earlier than that of Someiyosino. This precious species was developed by the local people 21 years ago. Many cherry lovers visit this area in the blooming season, and feel the herald of spring there. I'm also one of those people. 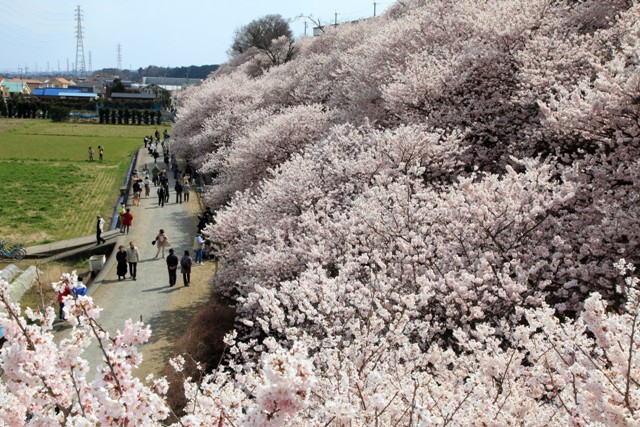 Mint-colored Train on the Daiyuzan Line

The electric car 1300 series was one of the main fleets owned by the Transportation Bureau of Yokohama City. 30 units in total were built by Kisha-kaisha in 1947. It was Yokohama's last streetcar, which a conductor was on board. In other words, the driver had to take the role of conductor as well later on this model. The 1300 series has a 13.62 meters-long and 2.48 meters-wide body with two bogies named Kisha-kaisha Type D14. The gauge size is 1,372 millimeters. There are six doors on the body. They are four sliding and two folding doors. The 1300 series can accommodate 120 passengers. I like the beige and light blue two-toned body. I think this color design gave local people hope for the future after the end of WWII. The 1300 series was about to retire in 1971 while it was missed by local people and rail-fans.

Incidentally, Yokohama is the second-largest city in Japan. This mega-city once had an extensive tram network. The first route was opened in 1914 by Yokohama Electric Railway Company. Although the tram was a useful transportation means for local people, it was unfortunately abolished in 1972 due to heavy traffic congestion in the urban area. The representative streetcars are now preserved and exhibited in the Yokohama Tram Museum. 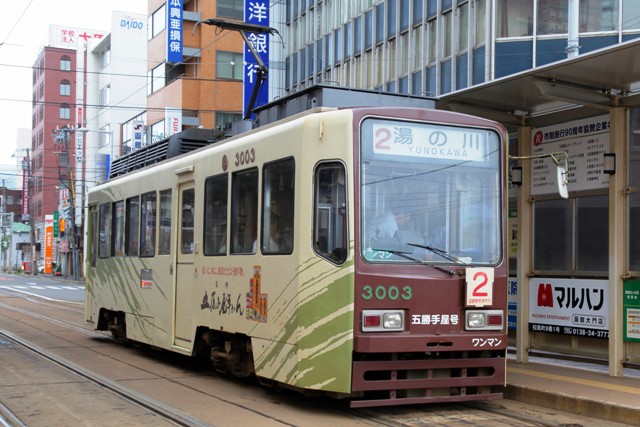 Onuma is a nature park located in Nanae Town, a northern suburb of Hakodate City on Hokkaido Island. Onuma Park encompasses Lake Onuma and a volcanic mountain named Komagatake. It was designated as a quasi-national park in 1958. Onuma was created as a dammed lake by mudflows due to eruptions of Komagatake Volcano between 50,000 and 30,000 years ago. The lake is surrounded by birch and maple forests. I visited this breathtaking and quiet park with my family in the summer of 2012. We rented bicycles, and went around the lake at first. We then enjoyed strolling and canoeing at our favorite spots.

For your information, all the 3000 series tramcars were renovated from 2016 to 2020 due to deterioration. The frontal lights were changed and the frontal destination display devices were also changed from rollsigns to the LED displays.

Glass-themed Park on the Joetsu Line

Tsukiyono was a town located on Tone River, Gunma Prefecture, about 150 kilometers north of Tokyo. Tsukiyono means a moonlight field in Japanese, but this beautiful town name unfortunately disappeared in 2005, as Tsukiyono was merged into the expanded town of Minakami.
One of the must-see spots in ex-Tsukiyono Town is Tsukiyono Vidro Park. It's a glass-themed park, which centers around glassworks, and features trial workshops, souvenir shops, a museum, a restaurant and a cafe. I recently visited there with my family, and spent the whole day in the park. We could see the manufacturing process of glassware really up close, while it was individually created by the hands of craftsmen. In addition to watching, we could also try making glassware ourselves.
To visit this unique sightseeing spot, the nearest railway station is Gokan on the JR East Joetsu line. Our vehicle was the EMU 211-3000 series. The 211 series was developed by Japanese National Railways in 1985. The 211-3000 series is one of the 211 series group trains with cold district specifications. 130 cars of the 211-3000 series are currently operated on the Joetsu and the adjacent lines. The breakdown is 7 sets of 6-car trains and 22 sets of 4-car trains.
The 211-3000 series has a bit of an outdated field excitation electric control system, but we must not forget that it has realized a large amount of operating cost reduction using its regenerative braking system. I like its whirring sound generated by the DC motors. 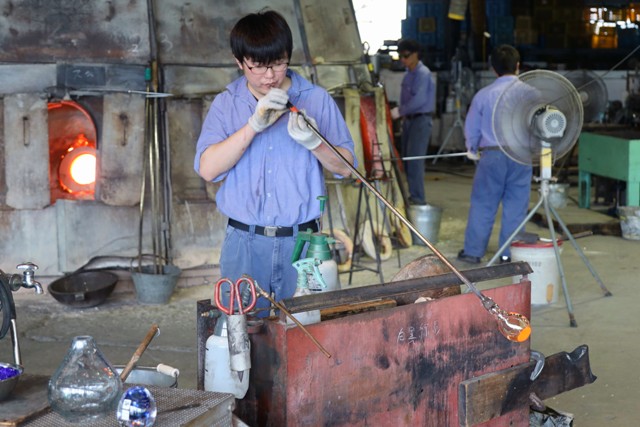 Following the electric car 9600 series, I'm going to continue to show you the other tramcar and a beautiful must-see spot in Hakodate City.

The 2000 series is an electric car operated by Hakodate Transportation Bureau. Only two units in total were built by Alna-koki in 1993 and 1994. It's a 12.32 meters-long tramcar with a VVVF inverter (variable frequency drive) electric control system. It has two 60 kW induction motors per unit. One unit can accommodate up to 58 passengers. I like this tramcar, but the only problem is the defense against the summer heat. Even in the cool northern city, it becomes hot in summer probably because of recent global warming. Passengers need the air conditioner.

Taking the tram line, I visited the Trappistine Convent, which is located in the eastern part of Hakodate City, with my family in 2012. The Trappistine Convent was established by eight nuns from France in 1898. It's Japan's first women's monastery. The existing church building was built in 1927, featuring the mix of the Gothic and Romanesque styles, such as the brick exterior and the semicircular-arched windows.

Visitors are allowed to tour only the forecourt and the museum, as there are currently about 60 nuns in the convent. Of course, we should walk around the convent quietly. The statue of Virgin Mary was especially beautiful and impressive for us. At the shop for visitors, we could get the tasty cookies "Madalena (Madeleine)", butter candies and rosaries made by the nuns. 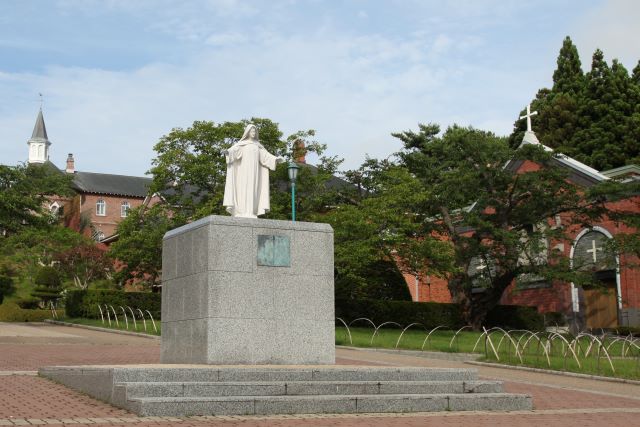