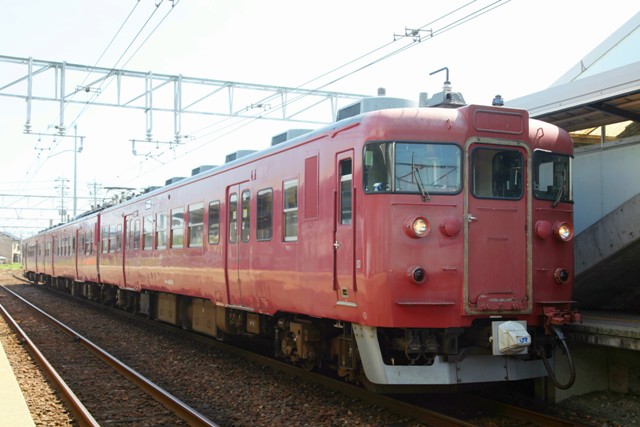 After visiting Hakui City, we went back to Kanazawa City by train. Our vehicle was the red colored EMU JR West 413 series, an AC-DC dual mode train. It was launched in 1986 by the Japanese National Railways. The 413 series is similar with that of the 415 series, but the numbers of passenger doors are different from each other. The 413 series has 4 doors per unit; meanwhile, the 415 series has 6 doors per unit. The 413 series is the old and historical train in the Hokuriku area; however, a total of 11 sets are still operated. 6 sets belong to JR West; meanwhile, 5 sets belong to Ainokaze-Toyama Railway. The JR West trains are red colored; meanwhile the Ainokaza-Toyama trains are blue colored.

After coming back to Kanazawa, we then visited Kenrokuen Garden. Along with Kairakuen in Mito City and Korakuen in Okayama City, Kenrokuen is counted as one of the three most famous gardens in Japan. It was originally built as the outer garden of Kanazawa Castle in 1676. The garden was then developed to perfection over generations by the lords of the Kaga Domain. There are ponds, streams, hills, groves, flower gardens, several pavilions and tea houses. Among the various highlights in the park, I like "Karasakimatsu (Karasaki Pinetree" best. It was planted by Maeda Nariyasu, the 12th lord of the Kaga Domain, in 1830s. We can see the well-formed pine tree, which has long branches extending over the water surface of a pond. 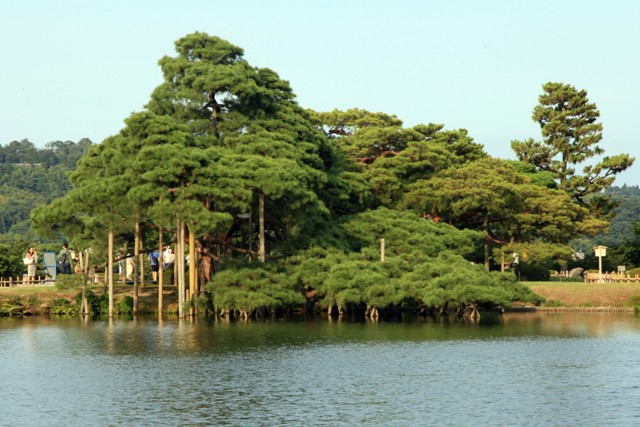 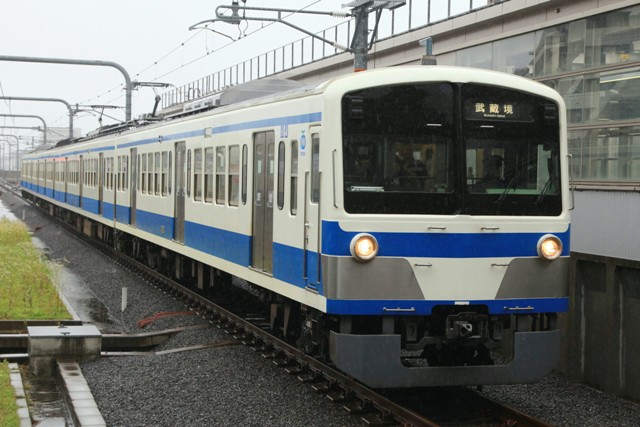 Following the "Umikaze color" train, I am going to show you the other special color train on the Seibu Tamagawa line today.

261F of the EMU Seibu 101 series is a 4-car train built by Seibu Tokorozawa Factory in 1980. Its body length is 20 meters and it has 6 passenger doors per unit. 261F consists of two motorcars and two trailers (2M2T). Its technical specification is rather old with a rheostatic electric control system, but 261F is the powerful train as it has 150 kW DC motors. 261F was once renovated in 2005. The resisters and compressors were changed to the new ones. Standard type pantographs were replaced by single-armed ones. Motor generators were changed to SIVs (auxiliary power units). This old train can still keep up with young ones.

261F has white-color bodies with dark blue-color stripes. I like this body color design, as it glows backed by the blue sky both on the Seibu Tamagawa line and Izu-Hakone Railway. 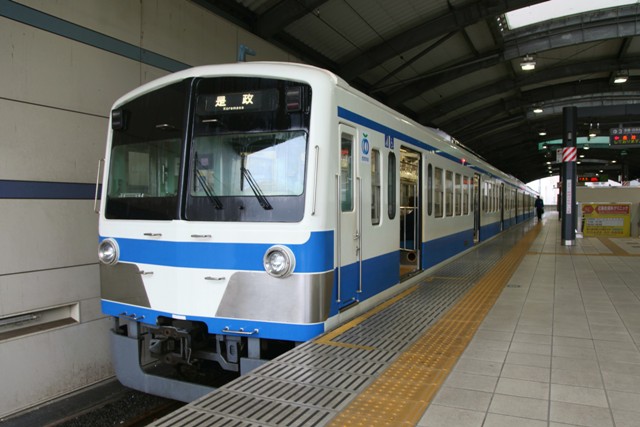 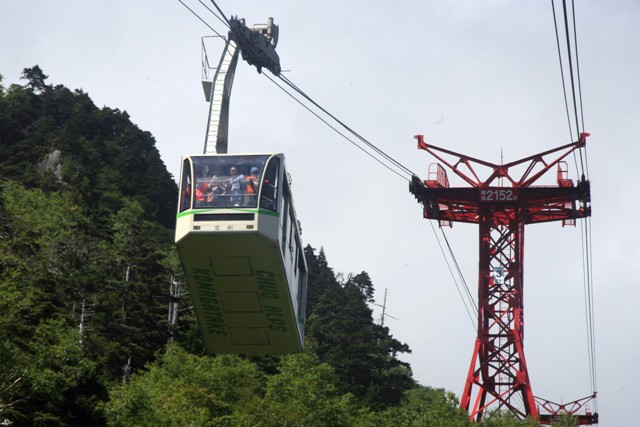 Kiso Mountains, also known as the Japanese Central Alps, is famous for its glacial topography called Senjojiki Kar (Senjojiki Cirque). It was formed during the last glacial period about 19,000 to 17,000 years ago. A kar is a bowl-shaped topography, which is often seen below the summit of high mountains. Senjojiki Kar is one of the largest kars in Japan. It is a very beautiful and unforgettable scenery.

To visit this heavenly paradise, the nearest railway station is Komagane on the JR Central Iida line. After getting off the train, you should take the bus service to Shirabidaira, and transfer for an aerial tramway, "Komagatake Ropeway". It takes about 5 hours from Tokyo to Senjojiki Kar.

Komagatake Ropeway was opened in 1967. Connecting Shirabidaira and Senjojiki stations, the route length is 2,334 meters. Senjojiki is known as the highest aerial tramway station in Japan. It is located 2,612 meters above sea level. The height difference between the highest and lowest points of the route is 950 meters, which is also the largest in Japan. The maximum inclination of the route is 34.9 degrees.

Currently, the fourth generation gondolas, which were built by Osaka Sharyo, are operated on the route. Each gondola can accommodate up to 61 passengers and they are operated every 30 minutes. Extra operations are also scheduled during the peak sightseeing seasons. The maximum operating speed is 7 meters per second. The travel time between the two stations is 7.5 minutes. It took only a moment. 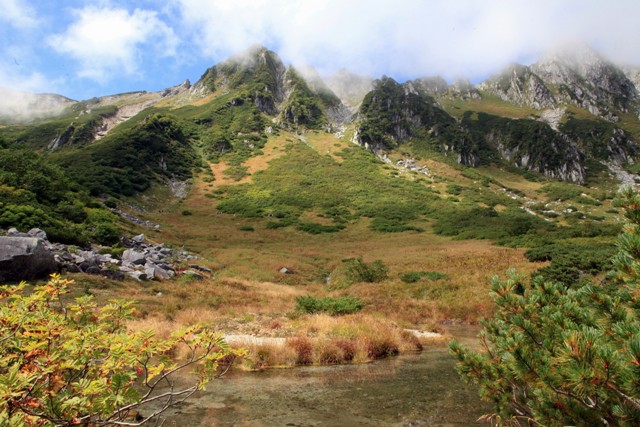 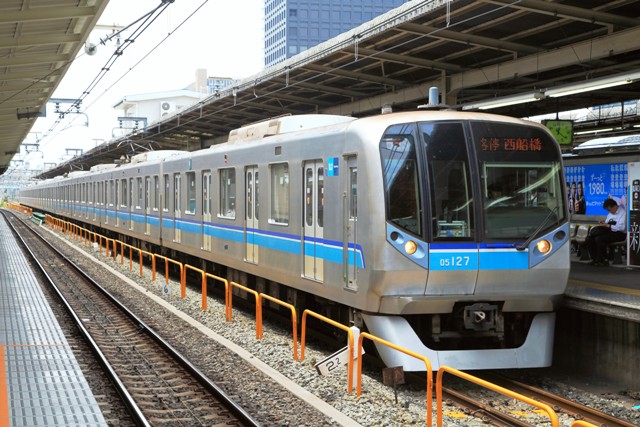 I have already uploaded more than 1,200 posts in this blog. You may think that all the train models in Tokyo have already been introduced here. Wait a moment please. There still remains an important model. The introduction of trains in the metropolitan area is indeed endless.

The EMU Tokyo Metro 05N series makes its first appearance here today. It is a 10-car commuter train operated on the subway Tozai line. The 05N series debuted in 1999. A total of 19 sets, 190 units were built by Kawasaki Heavy Industries, Kinki Sharyo, Tokyu Sharyo and Hitachi. It has IGBT-VVVF (variable-frequency drive) electric control system. The 05N series is a younger brother of the 05 series. It means that the technical specifications of the 05N and the 05 series are similar, but the outer designs are different from each other. For instance, the elder 05 series has a gentle and quiet face; meanwhile, the younger 05N series looks "short-tempered". It is probably because the lights of the 05N series are diagonally arrayed. The color designs of the side stripes are also different from each other. That kind of discovery is a great gratification for a trainspotter like me.

Incidentally, the Tokyo Metro Tozai line is one of the busiest subway routes in Tokyo. Connecting Nakano and Nishi-Funabashi (30.8 kilometers), it penetrates downtown Tokyo from west to east. The trains are directly operated onto the JR East Chuo Local line to Mitaka and the Toyo Rapid Railway to Toyo-Katsutadai. 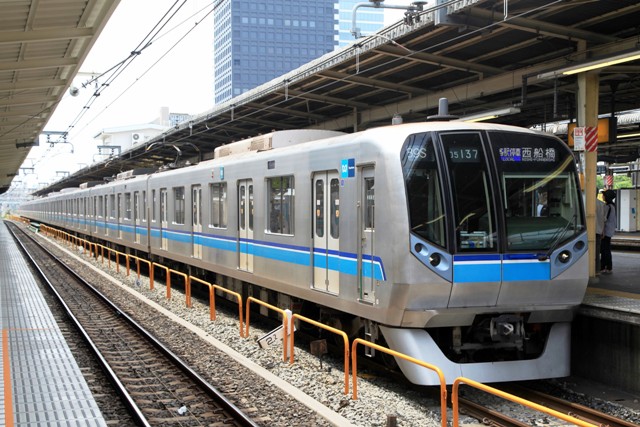 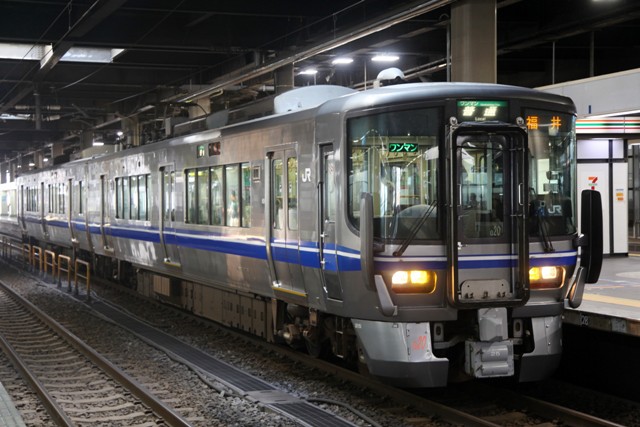 It was very hot this mid-summer in the Hokuriku area. The maximum daytime temperature was often over 35 degrees Celsius. Kanazawa City was no exception. During my family vacation, we suffered from intense heat every day, so that we enjoyed strolling in the twilight time after sunset instead in the daytime. What's up?

We found a beautiful stained glass on the front gate of Oyama Shinto Shrine in the central part of the city. It was beautifully illuminated backed by the evening glow. This unique gate named "Shimmon (God gate)" was constructed in 1875 mixing traditional Japanese and Western-style architectures. We were lucky, as it was the perfect timing to see this beautiful gate.

Before strolling in the city, I stopped by Kanazawa station to take photos of local trains. I often came across the EMU JR West 521 series, which was the representative commuter train in the area. The photo shows set G20 of the 521 series on the Hokuriku main line. Set G20 was launched in 2009 as the second batch (G group) of the 521 series to modernize the commuter transportation in the Hokuriku area. A total of 30 sets, 60 units of G group trains, were built by Kinki Sharyo and Kawasaki Heavy Industries. Three sets of these 30 sets were, then, transferred to IR Ishikawa Railway in 2015. The 521 series is an alternate current (AC) - direct current (DC) dual electric system, since AC and DC tracks are mixed in the area. 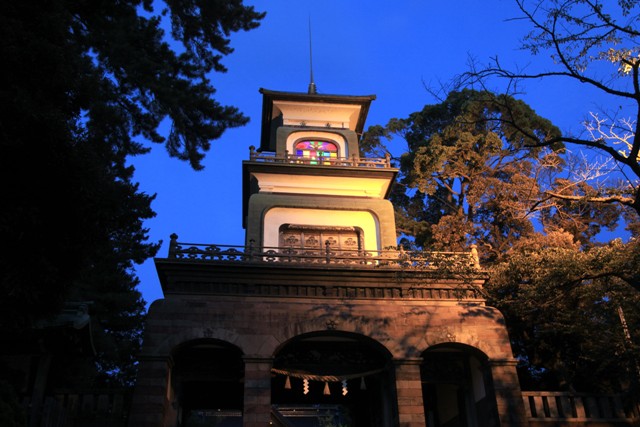 A gate with stained glass windows in Oyama Shrine near Kanazawa station
Labels: Outside Tokyo 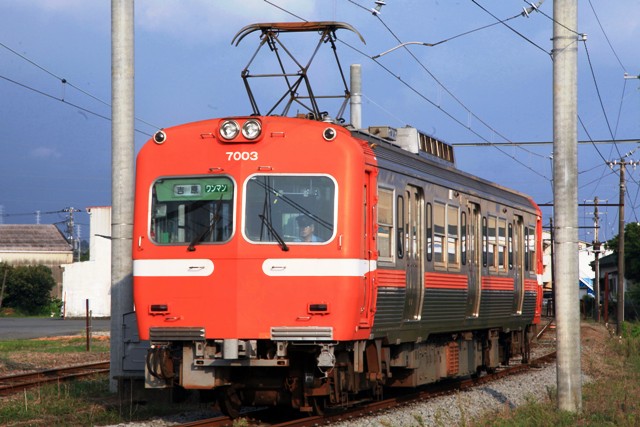 I recently visited Gakunan Railway for the first time in four years. Gakunan is a small local private company in Shizuoka Prefecture about 110 kilometers west of Tokyo. What was new with this railway? In November, 2018, a new train was launched on the line. It was the EMU 9000 series (MoHa 9001 and 9101) transferred from Fujikyu Railway. Unfortunately, I couldn't have a chance to ride on the new train, so that I am going to introduce again the old EMU 7000 series to you.

The 7000 series is the ex-Keio 3000 series train. It was transferred to Gakunan in 1996. A total of three units (MoHa 7001, 7002 and 7003) were transferred, but one unit (MoHa 7002) has already been retired from the track. The 7000 series train has vermilion colored faces and stripes. This color is called "international orange" by the company. I don't know why "international", but probably because the company expects a further increase of foreign passengers who visit the southern foot of Mt. Fuji.

After taking the photos of the Gakunan train at Gakunan-Enoo station, I visited Sudogawa Valley with my family. This deep and steep valley is famous as a bungee jumping site. Visitors can safely enjoy jumping from the highest point of a bridge under the guidance of experts. When we visited the site, the echoes of jumpers' shouts rang throughout the valley.

Did I try bungee jumping? Oh, no! I am chicken. My family members only became birds. 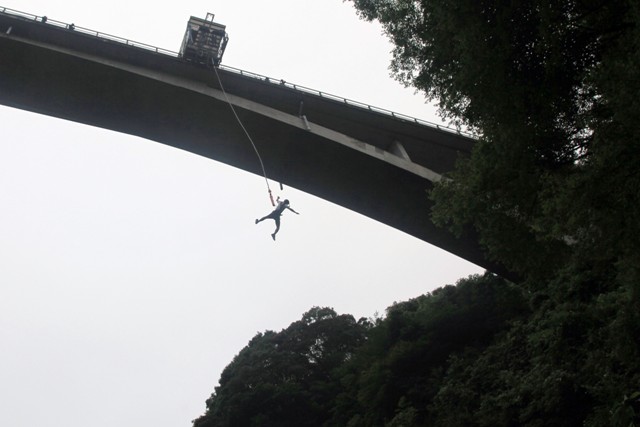 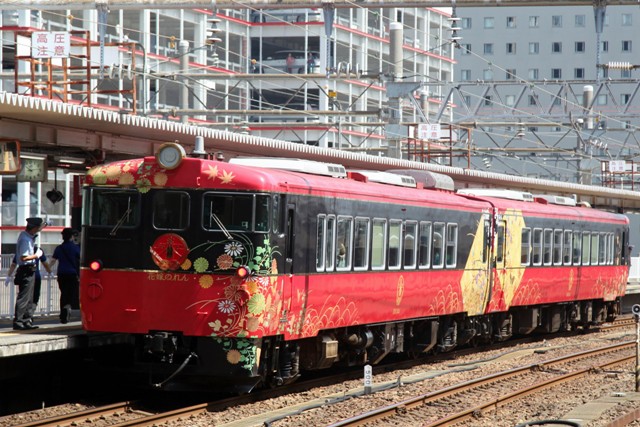 When we visited Hakui City, I found a gorgeous red colored train at Kanazawa station. What was that? It was JR West's sightseeing train called Hanayome-noren. The word "Hanayome-noren" means a bride sprit curtain in the Hokuriku area. It is a gorgeous traditional trousseau, which a bride brings with her when she marries.

As its name suggests, the outer design of the Hanayome-noren train was taken from local traditional crafts such as Wajima lacquer, Kanazawa gold foil and Kaga Yuzen hand dyeing. The interior is also decorated with traditional designs. Passengers can enjoy entertainment by local performances as well.

The train for Hanayome-noren is the DMU JR West KiHa 48 series (KiHa 48-1004 and KiHa 48-4). It was originally built as a commuter train in 1982, and, then, modified to a sightseeing train like JR East's Minori (harvest) in 2015. The technical specifications are just standard. For example, it has 220 PS diesel engines. The mechanism for transmitting power is hydraulic. The maximum operating speed is 95 kilometers per hour. It currently belongs to Toyama branch office of JR West Kanazawa depot.

JR West and IR Ishikawa Railway jointly provide two round-trip services a day every weekend with this sightseeing train. The operating route is between Kanazawa and Wakura-onsen stations (71 kilometers). It takes approximately 80 minutes one-way. We tried to reserve the seats at Kanazawa station, but it was unfortunately full due to the peak summer vacation season. I am hopeful of the next traveling chance to the Hokuriku area. 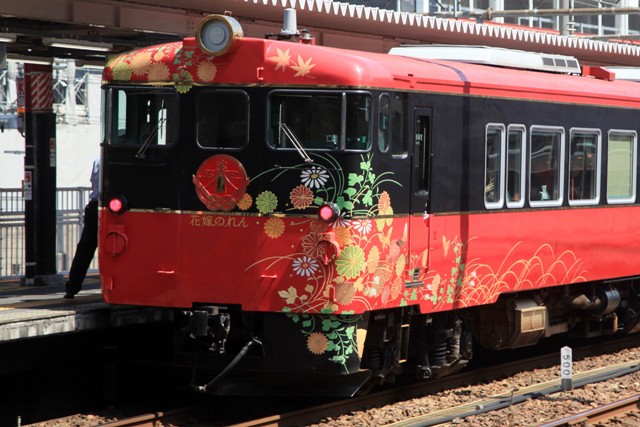 Close up of Hanayome-noren train