After arriving at Kyoto, we transferred to the subway Karasuma line to visit several historical spots. The first one was Daikaku-ji temple. It's a Buddhist temple, but was originally opened as the detached imperial palace for Emperor Saga (765-842). I'm specifically fond of Osawa pond in the precincts. It's beautiful and quiet even in the city. We enjoyed walking around the pond, and spent a relaxing time there.
Incidentally, the subway Karasuma line was opened in 1981 between Kitaoji and Kyoto stations by the Transportation Bureau of Kyoto City. Currently, its line length is 13.7 kilometers. The trains on the line are directly operated onto the Kintetsu Kyoto line to Nara station. The gauge size is 1,435 millimeters and the electric system is 1,500 V DC overhead. The train is composed of 6 cars, and operated every 7-8 minutes in the daytime.
The EMU 10 series is the first model on the line. 20 sets, 120 cars, were built by Kinki Sharyo and Hitachi from 1980 to 1997. The body is aluminum alloy with a green colored vertical stripe on the front car. With regard to the technical specification, the electric control system was originally the thrystor or armature chopper, but recently changed to the state-of-art SIC-IGBT-VVVF inverter with the induction motors.
On March 29th last year, the Transportation Bureau made a press release announcing that the new model for the Karasuma line will be launched in the fiscal year 2021. Here too surged a wave of generational change.
Labels: Outside Tokyo, SME

I recently visited Kyoto City for the first time in three years. Although it was a short stay with my family, I could take several railway lines in the city. What was new with the trains in this historical city?
Firstly, I could get on the new train on the Tokaido Shinkansen from Tokyo to Kyoto station. It was the EMU JR Central N700S series. As I posted before, JR Central launched this new model on July 1st this year to replace the old model, namely the 700 series. The introduction of the new Tokaido Shinkansen train was for the first time in 13 years.
One of the new passenger services in the N700S series is the electrical outlets. Even in the standard car, every seat has an electrical outlet to charge a passenger's mobile phone. It's quite convenient. In terms of riding comfort, the N700S series has new comfortable reclining seats both in Standard Class cars and Green (the first class) Cars. If you put your seat back, your seating face also automatically tilts. In addition, the N700S series has a full active vibration control device operated by a pump to prevent rolling. It's not conspicuous, but a good passenger service, isn't it?
Incidentally, I found a new logo of the N700S series on the side bodies. It's "Supreme". As you may know, S of the N700S series stands for Supreme. In other words, JR Central launched the N700S series as the supreme Shinkansen train.
To be continued...
Labels: JR Central, Shinkansen

The EMU E231 series is one of the major group trains on the JR East lines, and widely operated in the Tokyo metropolitan area. It was launched in 2000 to replace the old models such as the 103, 115, 201 and 205 series. A total of 2,736 cars were built by Tokyu Sharyo (present J-TREC), Kawasaki Heavy Industries and JR East Niitsu Factory from 2000 to 2011. There are two types of E231 series. One is a commuter train type, and the other is a suburban train type. Here, I'm going to explain the latter in this post

The bodies are stainless-steel, with orange and green-colored stripes. The main set has two double-decker Green Cars (first class cars). With regard to the technical specifications, the suburban type of the E231 series has IGBT-VVVF (Insulated Gate Bipolar Transistor-variable frequency drive) electric control and regenerative braking systems. The traction motor is type MT73 induction motors that generate 95 kilowatts of electricity.

The Keikyu 600: Improvement of Passenger Services 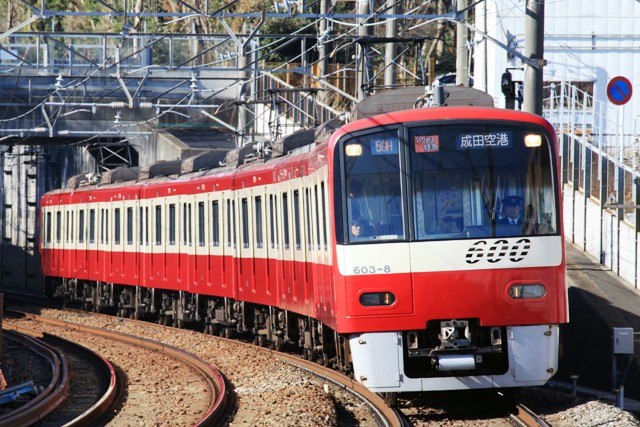 There are many railway companies in the Tokyo metropolitan area. These companies are in competition to attract passengers. It might be hard to imagine for foreigners, but I expect you understand that the railway network in this area is quite dense, so, it allows passengers to choose the best line to get to their destination.

Keikyu is one of the major companies in the Tokyo metropolitan area. They have an 87 kilometers line network in the southern part of the region. This company faces fierce competition from Tokyo Monorail Company on the route between downtown Tokyo and Tokyo International (Haneda) Airport. Furthermore, Keikyu is also exposed to competition with JR East on the section between downtown Tokyo and Yokohama station. The important factors are fares, speed and passenger services.

In 1994, Keikyu launched a new train, the EMU 600 series, to improve their passenger services. The 600 series is a commuter train, but it has comfortable cross seats in the cabin to provide passengers with good services. 14 sets (88 cars) were built by Tokyu Sharyo and Kawasaki Heavy Industries from 1994 to 1996. The body is aluminum alloy and painted with red and cream colors. With regard to the technical specifications, the 600 series has a GTO-VVVF inverter (variable frequency drive) electric control system with 120 or 180 kW induction motors. The 600 series is directly operated onto the Toei-Asakusa, Keisei, Hokuso and other lines.

The EMU 600 series opened a new era on the Keikyu line. 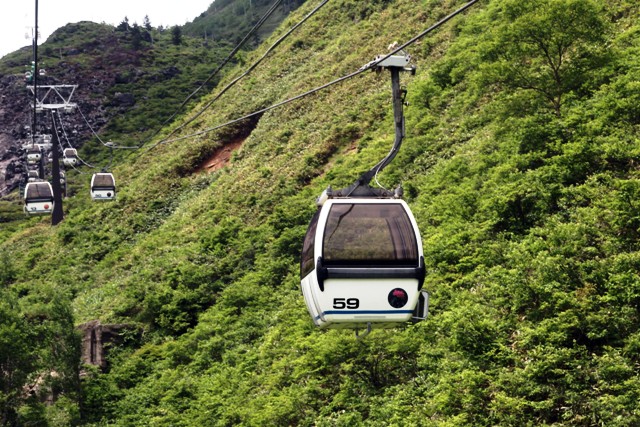 Shirane Mountain is a beautiful volcano located in Kusatsu Town of Gunma Prefecture, about 150 kilometers north of Tokyo. The green-colored mysterious crater lake named Yugama and the pink-colored alpine flowers named Komakusa is specifically popular among tourists. To visit Shirane Mountain, an aerial lift, Shirane-kazan Ropeway, was convenient. I visited there in 2013 to see both Yugama crater lake and Komakusa alpine flowers on the mountain.

On January 23, 2018, Motoshirane Peak (2,171 meters above sea level) of Shirane Mountain abruptly erupted for the first time in 3,000 years. Volcanic conglomerates hit the gondolas and the station roof of the aerial lift. They were severely damaged. Half a month later, the mayor of Kusatsu Town eventually decided to abolish the Shirane-kazan Ropeway. That was very sad news.

Shirane-kazan Ropeway was a single rope - automatic circulation type gondola lift. It was originally opened by Kusatsu Town in 1960. Connecting Sanroku station (1,545 meters above sea level) and Sancho station (2,017 meters above sea level), its route length was 2,407.53 meters. The height difference between the two stations was 472 meters. Its maximum inclination was 28.82 degrees. There were 22 struts on the route. The gondolas were built by CWA in Switzerland. They were operated counterclockwise with a speed of 5 meters per second. It took 8 to 10 minutes to go one way. Each gondola could accommodate up to 6 passengers. Its transportation capacity was 1,800 passengers per hour.

Sayonara (good-bye) and arigatou (thank you), Shirane-kazan Ropeway. I shall never forget you. 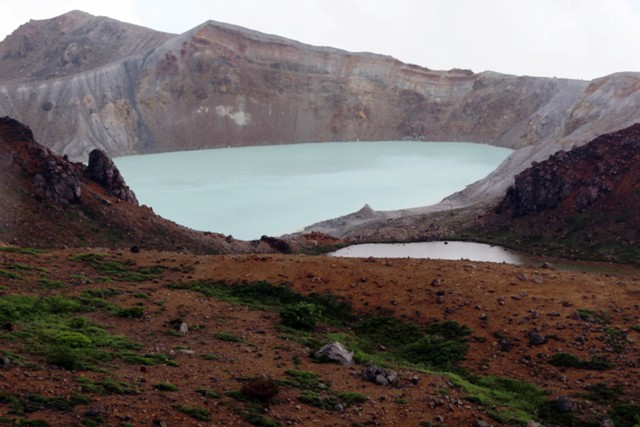 The Oldest Model on the Chiba Newtown Railway 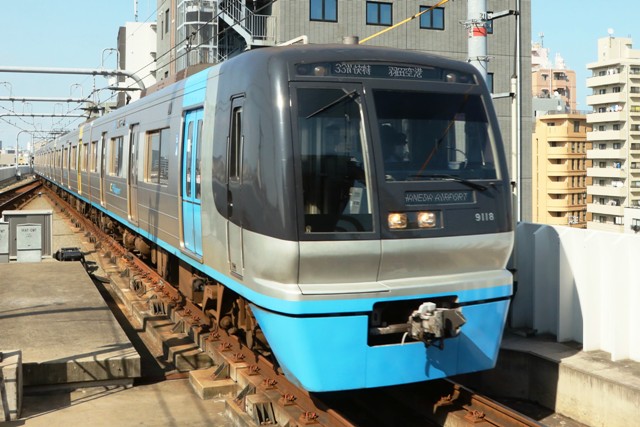 Chiba Newtown Railway is a small railway company in Chiba Prefecture. The company owns a double-track between Komuro and Imba-Nihon-Idai stations (12.5 kilometers) in the Chiba Newtown area. The gauge size is 1,435 millimeters and the electric system is 1,500 V overhead. This railway was originally constructed and owned by the Housing and Urban Development Corporation (later named Urban Renaissance Agency), but transferred to Chiba Newtown Railway (a Keisei Group company) in 2004.

This company currently owns three kinds of train models, namely the EMU 9100 series, the 9200 series and the 9800 series. The 9100 series is the oldest of these three models. It was launched in 1994 to reinforce transportation capacity on the line. Three sets (24 cars) were built by Nippon Sharyo. They are directly operated onto the Keisei, Toei-Asakusa, Keikyu and other lines.

The 9100 series has the same driving devices with the Keisei 3700 series and the Hokuso 7300 series, although they have totally different body designs. A GTO-VVVF inverter electric control system with 130kW induction motors is equipped. The nickname of the 9100 series is C-Flyer. "C" stands for Chiba Newtown, while "Flyer" means rapid vehicle like the wind.

Incidentally, the 9100 series once had quite unique passenger services. Public telephones were equipped in the train. Passengers could easily contact their families and asked to come and pick them up by cars at stations. It was quite convenient, but the public telephones were removed in 1997 as mobile phones have become so popular. 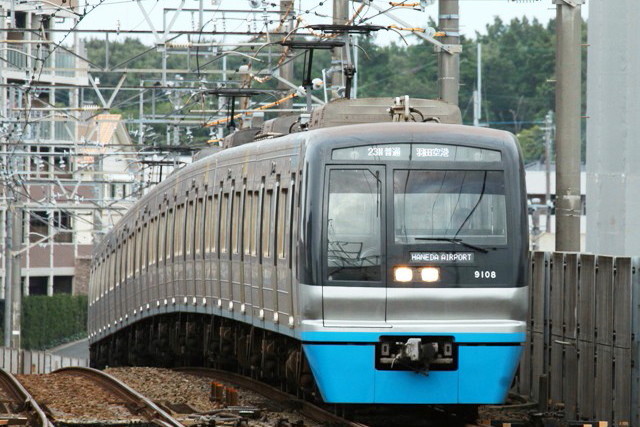 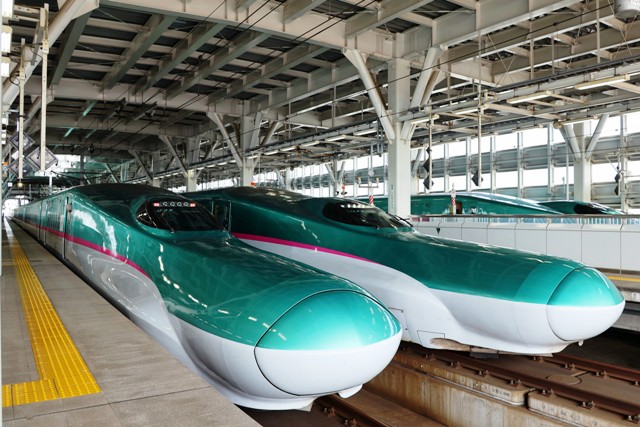 As you know, the EMU E5 series was launched in 2011 for speeding up the Tohoku Shinkansen trains. Its current maximum speed is 320 kilometers per hour (198.8 miles per hour), which is the fastest in Japan. 45 sets (450 cars) were built by Kawasaki Heavy Industries and Hitachi. JR Hokkaido's H5 series is a sister train of the E5 series. By tilting the train's body using advanced technology, the E5 series can keep a high speed on tight curves. Using the E5 series, a Super Express train "Hayabusa (Falcon)" has cut the travel time. Currently, it takes only 2 hours 59 minutes between Tokyo and Shin-Aomori stations.

Incidentally, the E5 series has a gorgeous "Gran Class (First Class)" car. The seats are similar to those of first and business classes in an aircraft. Meals, drinks and several amenities such as scuffs, blankets, an eye mask and magazines are provided. I would like to use this attractive "Gran Class" someday, but of course the fare is also handsome. 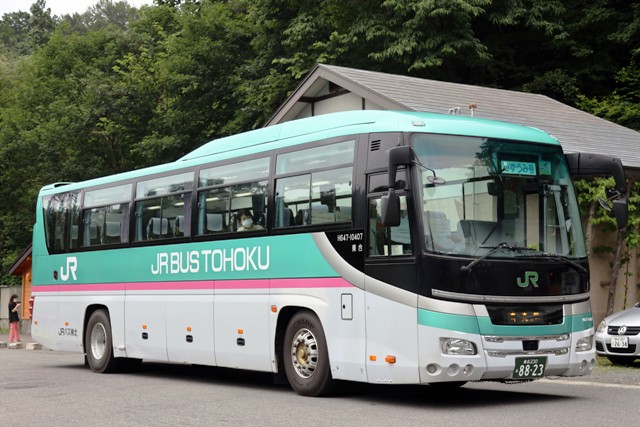