Final Chapter of the EMU 103 Series on the Nara Line 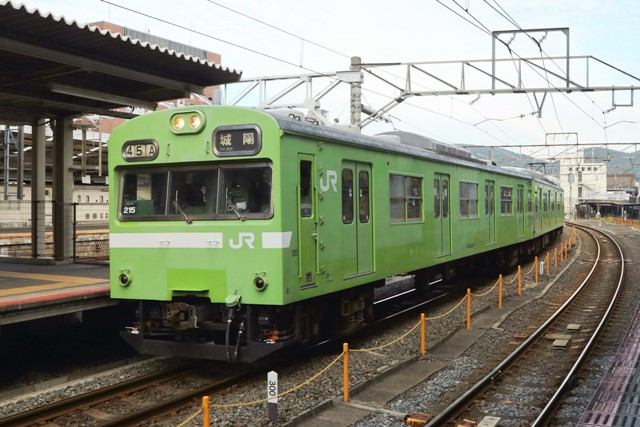 Set 407 of the EMU JR West 103 series arrives at Kyoto station
I recently visited Kyoto City on a business trip. I was very busy there, but I could secure just a short while to see several local trains at Kyoto station after finishing my meeting.
It's lucky that I came across the EMU JR West 103 series on track number 9 of the Nara line. The 103 series was commissioned in 1963 by Japanese National Railways (JNR). It was a representative JNR commuter train between the 1960s and 1980s. Many builders, such as Kisha-seizo, Tokyu-sharyo and Kinki-sharyo, built 3,447 cars over 21 years. The design and specification are rather old, but it seems very sturdy. The 103 series has been underpinning Japan's economic growth for the last 57 years, as it has been transporting hundreds of millions of commuters.
Most of the 103 series have already been retired from the tracks and scrapped. We can't see it anymore in the Tokyo metropolitan area. The situation is similar in Kyoto, but two sets (set NS407 and NS409) of 4-car trains are still operated on the Nara line. These trains have light green-colored steel bodies. One set is composed of two motorcars and two trailers (2M2T).
The old trains are constantly being replaced by the new models in Japan. The old commuter trains, which have been introduced by JNR, are being replaced by new ones by JR group companies. The final chapter of the JR West 103 series has just begun.
Labels: Outside Tokyo

Reunion with "Hana", the Flower of Trains 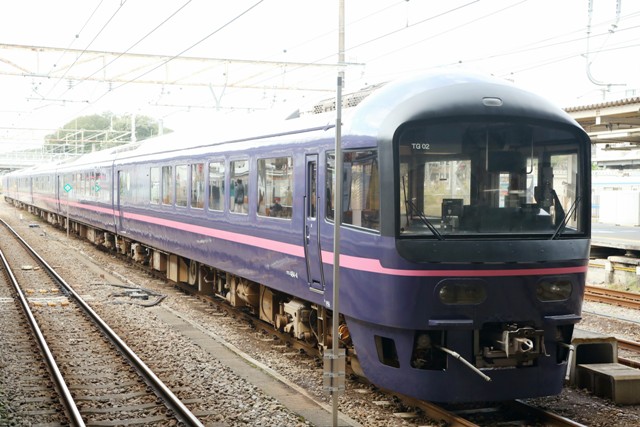 Set G6+G7 of the EMU JR East 485 series, "Hana", stands at Haijima Station
I recently came across one of the "Joyful Trains" at Haijima station on the Ome line. It was "Hana (flower)" currently belonging to Takasaki Railyard. This post will explain about Joyful Train and Hana.
What's Joyful Train? It's rolling stock operated by JR group companies for charters, special events and tourist excursions. Hana, Resort Yamadori, Resort Shirakami Aoike, Pokemon with You and Hanayome Noren are good examples. Irodori, Utage, Yuu, New Nanohana and Resort Shirakami Buna were also Joyful Trains, but they had already been retired.
What's Hana? Its formal name is set G6+G7 of the EMU JR East 485 series. Hana is an AC-DC (Alternate Current - Direct Current) dual system train consisting of 6 cars. Along with Utage and Yuu, Hana is an ozashiki train. The interior of Hana is arranged as a Japanese-type living room namely ozashki. Its floor is straw-matted with Japanese-style low tables so that the passengers are relaxed taking off their shoes as if they are at home.
Hana was launched in 1997 to replace an old ozashiki train "Nagoyaka (harmonious)". Nagoyaka was a passenger coach train pulled by a locomotive. It was inconvenient to operate when the locomotive was required to change by switchback at the terminal station. To make matters worse, the passenger coach train pulled by a locomotive had poor acceleration performance. Hence, it was a bottleneck of a timetable. A new Joyful Train, Hana, was built as an EMU to get good acceleration performance. Hana... long time no see. How are things? 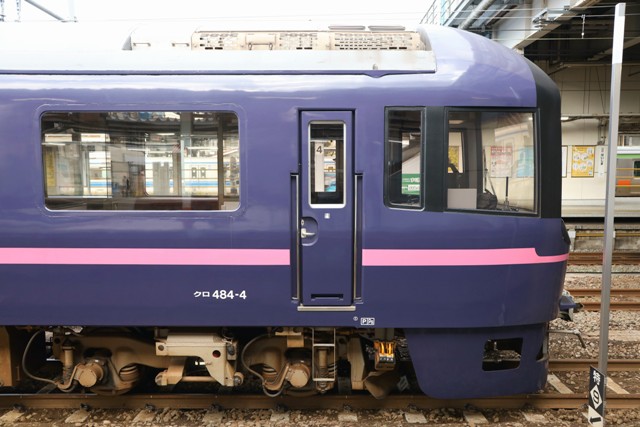 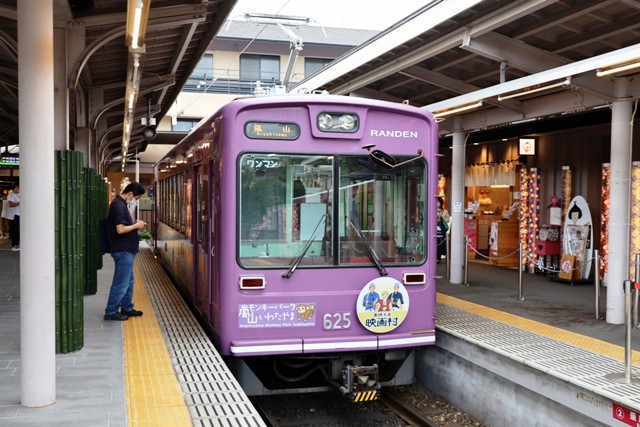 Unit 625 of the Electric Car Randen MoBo 621 series stands at Arashiyama terminal
Koetsu-ji is a Buddhist temple located in Takagamine, Kita Ward, Kyoto City. It was originally the residence of Hon-ami Koetsu who was a famous artist in the 17th century. The site was granted to Koetsu from Shogun Tokugawa Ieyasu in 1615. After the death of Koetsu, this residence was turned into the temple named Koetsu-ji in 1656. Today, the temple is known for its beautiful bamboo fences called Koetsu-gaki, and it also features an elegant tea ceremony garden with three tea houses with thatched roofs. I visited Koetsu-ji with my family in September, and enjoyed its Koetsu-gaki fence, beautiful garden and a nice view of Mt. Takagamine.
To visit Koetsu-ji temple, the nearest station is Arashiyama on the Arashiyama main line of Keifuku Electric Railway (Randen). Our vehicle was Unit 625 of the electric car MoBo 621 series. It's a 15 meter-long small tramcar. The MoBo 621 series was originally launched in 1936 under the name of the 121 series. 10 cars were built by Kawasaki-sharyo. About a half century later, six cars of the 121 series were renovated by Mukogawa-sharyo due to deterioration. Their DC motors, the bogies and the electric control system were inherited from the 121 series. On the other hand, their bodies were newly built. Unit 625 was completed in 1996. It has a light purple colored tiny body. It's beautiful and definitely my favorite.
I fully enjoyed both the traditional garden and the tramcar in the old capital. 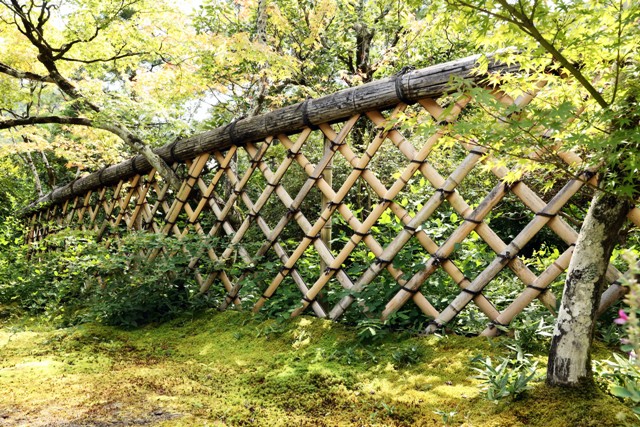 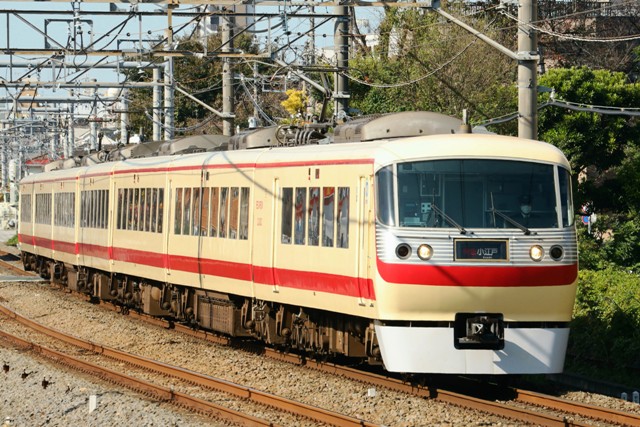 Set 10105 of the EMU Seibu 10000 series, "New Red Arrow Classic"
As I posted before, Seibu Railway launched a new limited express train, the EMU 001 series "Laview", last year. Laview is Seibu's coined word combining Luxury, Arrow and View. As a result, the pre-existing model, the EMU 10000 series "New Red Arrow", will be retired in the near future.
New Red Arrow was a flagship model of Seibu Railway before Laview debuted. It was launched in 1993, and is still operated on the Shinjuku line. It's conveniently accessed from downtown Tokyo to Sayama and Kawagoe cities. Before New Red Arrow debuted, the Red Arrow train also existed. Red Arrow was launched in 1970, and retired by the middle of the 1990s to be replaced by New Red Arrow. Red Arrow is no longer operated on the Seibu railway network, but, you can still recall the coloring of the Red Arrow train from set number 10105 of the present New Red Arrow. It's called "NRA Classic (New Red Arrow Classic)". It has two tones of red and beige colors... very beautiful.
Incidentally, I like New Red Arrow as its reclining seat is cushioned adequately enough for comfort; however, the sound insulation of the train lacks something. It was a bit noisy for a company's flagship train. The specification of the train is also rather old in this day and age. 26 years later, Seibu eventually introduced the long-awaited new flagship train, Laview. I hope that both Laview and New Red Arrow including NRA Classic will be active for a while now. 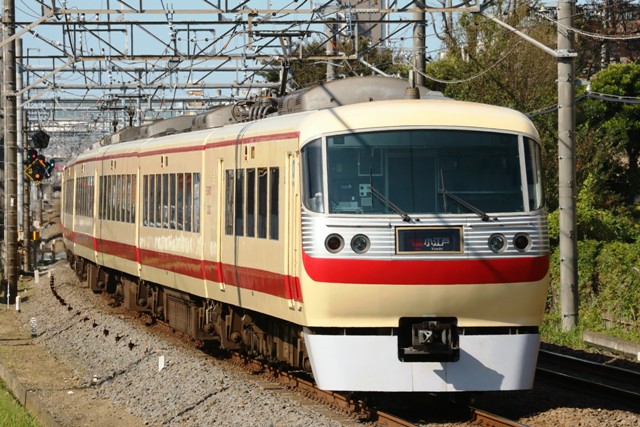 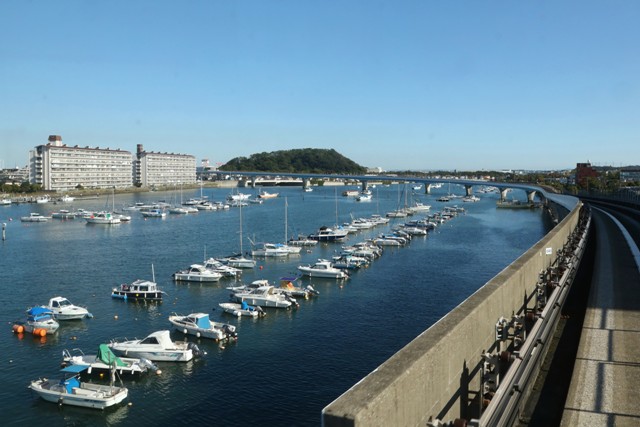 A marina near Kanazawa-hakkei terminal on the Seaside line
Labels: AGT, SME 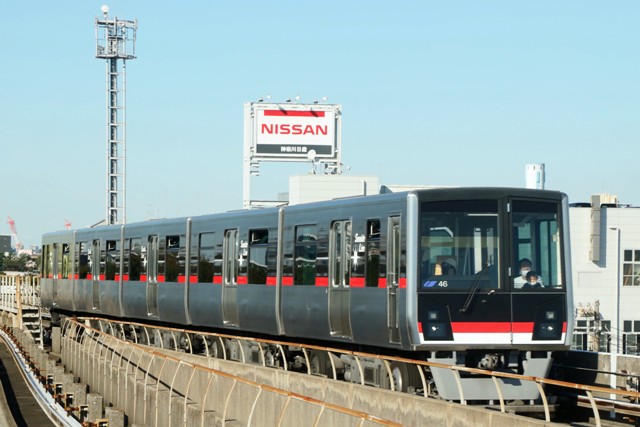 Set 46 (special color) of the EMU 2000 series travels on the Seaside line
I recently visited the Kanazawa seaside line for the first time in a year. It was the sunny autumn weekend. I enjoyed every minute of this futuristic vehicle ride.
The Kanazawa Seaside line is a rubber-tired AGT (Automated Guideway Transit) system in the southern part of Yokohama City, Kanagawa Prefecture, about 40 kilometers south of Tokyo. It was opened in 1989 by Yokohama Seaside Line Company. Connecting Shin-Sugita on the JR East Negishi line and Kanazawa-hakkei on the Keikyu main line, its operating length is 10.8 kilometers. The track is double, and the train adopts a 750 V DC. ATO (Automatic Train Operation) electric system, so there is no driver or conductor on the train.
I came across a special colored train, namely set 46 of the EMU 2000 series. Different from the standard colored trains, set 46 has black and orange colored stripes on the body. The black color symbolizes the night sky, while the orange color represents the morning sun in the Yokohama bay area. Set 46 became the first train with LED frontal lights on the line.
Incidentally, the EMU 2000 series is currently the sole model on the line. It was launched in 2011 to replace the old EMU 1000 series. Eighteen sets (from set 31 to set 48) of 5-car train (90 cars) were built by J-TREC (former Tokyu-sharyo) between 2011 and 2019. The era of the EMU 2000 series will continue for the time being on the Kanazawa Seaside line. 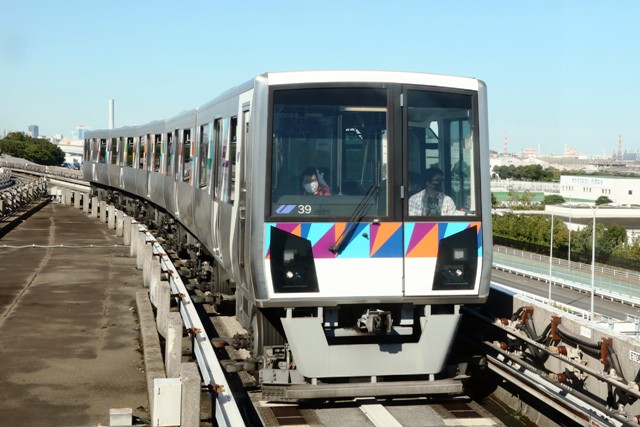 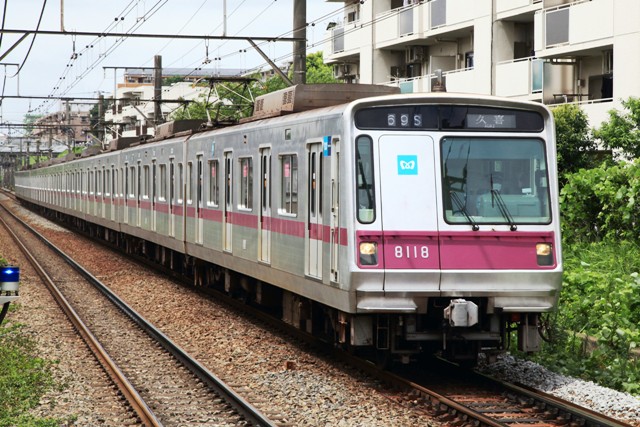 EMU Tokyo Metro 8000 series travels on the Tokyu Den-en-toshi line
On March 26th, 2019, Tokyo Metro made a press release announcing that the new subway train named EMU 18000 series will be launched on the Hanzomon line in 2021. According to media, the first set was recently completed at Hitachi Kasado Factory and transported to Tokyo Metro's railyard last month. Tokyo Metro plans to introduce nineteen sets of the 18000 series by the end of March, 2023, which means that all the old 8000 series trains will be replaced by the new 18000 series by then.
The EMU Tokyo Metro 8000 series was launched in 1981 with the construction completion between Nagatacho and Hanzomon stations on the subway Hanzomon line within sight. Nineteen sets of 10-car train (190 units) were built between 1980 and 1994 by Tokyu-sharyo, Nippon-sharyo, Kinki-sharyo, and Kawasaki Heavy Industries. The greatest feature of the 8000 series is the front design. Its futuristic convex face with a large frontal window was inherited from the 6000 series on the Chiyoda line. This design is still fresh for me, even though 40 years have passed since the 8000 series debuted.
In terms of the technical specifications, Tokyo Metro adopted bolsterless bogies for the first time on the 8000 series. An armature chopper electric control system with DC motors equipped in the early stage was later changed to an IGBT-VVVF inverter electric control system with induction motors.
The final chapter of the old subway train, the EMU 8000 series, has just begun. 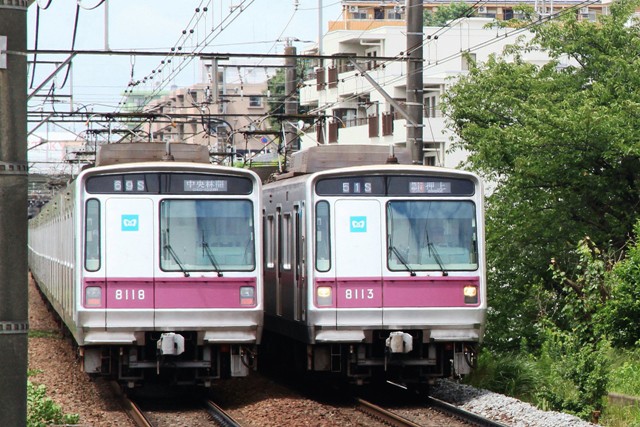 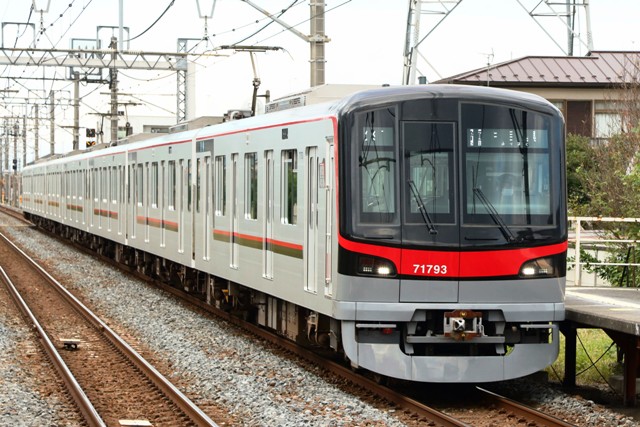 On March 20th this year, Tobu Railway launched a brand new train, the EMU 70090 series, on their Isesaki line. Same as the pre-existing 70000 series, the new 70090 series is directly operated onto the Tokyo Metro-Hibiya line.

Incidentally, the technical specifications of the 70000 and the 70090 are basically the same. One set is composed of 7 motor cars without trailers. The electric control system is the state of the art Si-IGBT VVVF inverter with PMSMs (permanent magnet synchronous induction motors). 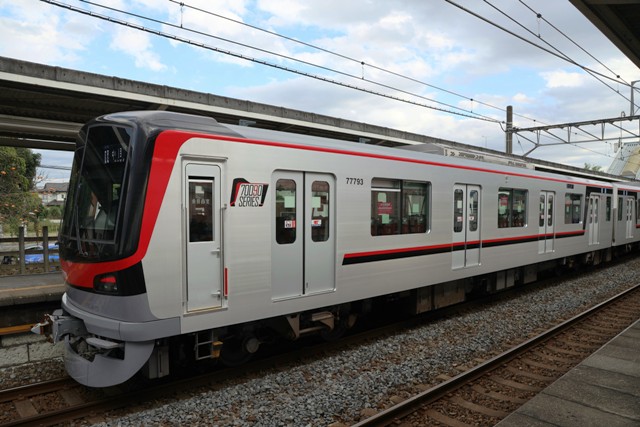