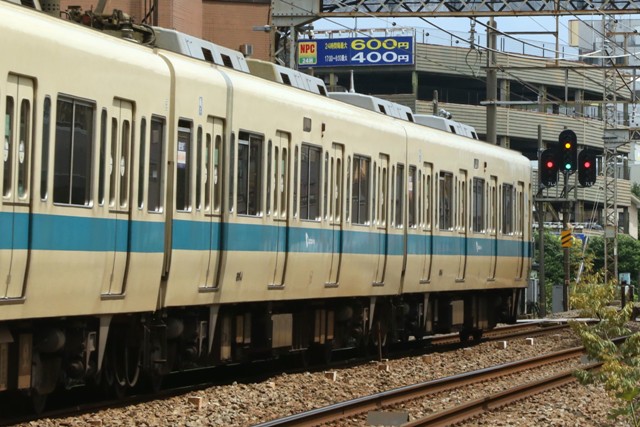 Odakyu Electric Railway adopts the ground signal system. You can see examples in the photos. They were taken near Sobudaimae station. There are three traffic lights on the track. From left to right, they are for the eastbound siding, the eastbound main line and the westbound main line. The red light means "stop". The green light means "advancement (maximum speed of 110 kilometers per hour)". The green plus yellow lights mean "reduced speed (maximum speed of 75 kilometers per hour)".

In the first photo, for example, the EMU 8000 series commuter train is permitted to travel on the eastbound main line at a maximum speed of 75 kilometers per hour. Needless to say, the automatic emergency brake will be applied, if the train exceeds the speed limit. 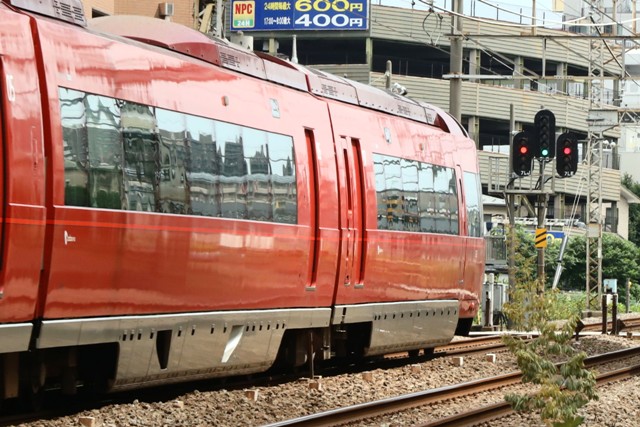 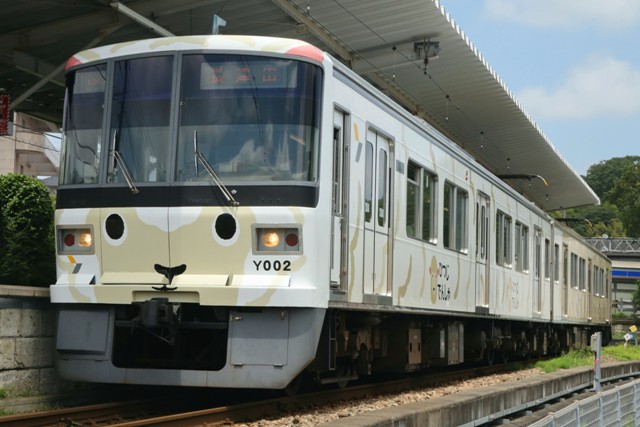 
On March 29th, 2020, Yokohama Minato Mirai Railway launched a special poster train named "Sheep Train" on their Kodomonokuni line. The purpose of the poster train is to promote tourism to Kodomonokuni (the Children's Land), which is an amusement park located in Yokohama City, some 30 kilometers west of Tokyo.

Yokohama Minato Mirai Railway offered one set of their 2-car train, Y012F of the EMU Y000 series, for the poster train. We can see cute images of sheep both on the bodies and the interior of the trains. Each car depicts a sheep in the outer design; meanwhile the pastures with sheep are drawn in the interior. Needless to say, there are many sheep in Kodomonokuni.

The Y000 series was built by Tokyu Sharyo, and launched in 1999 as the fifth generation train on the Kodomonokuni line. Currently, three sets (six units) of the Y000 series are operated on the line. They are a standard colored train, the Sheep poster train and the Cow poster train. 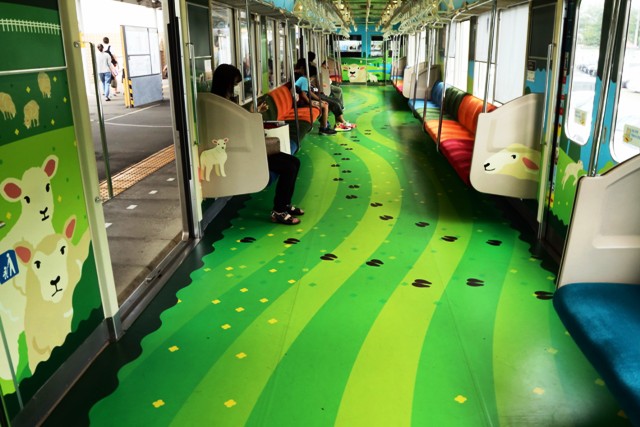 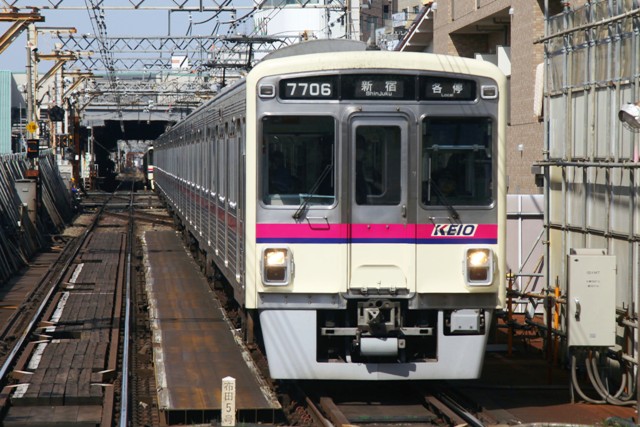 Following the Tokyu-Toyoko line surface tracks, I'm going to show you the other ex-surface track photographs, which I recently rediscovered on my hard disk. These photos were taken near Chofu station on the Keio line in March, 2012. It was five months before the completion of the underground tracks.

The first photo shows the surface tracks and the construction work of the underground tracks. It was really difficult work, because the underground tracks were constructed just below the surface tracks. The second photo shows the complicated railway tracks next to surface Chofu station. The Keio main line and the Sagamihara line tracks were crossed on the surface. It was a bottleneck on the timetable.

On August 19th, 2012, new tracks were eventually completed. A total of 3.7km surface tracks were moved to the underground. Three stations, namely Chofu, Fuda and Kokuryo stations were also moved to the underground. It was good news as a grade separated crossing of the Keio main line and the Sagamihara lines has made it possible for the trains to be operated smoothly. Another advantage of the underground tracks was the elimination of traffic jams at railway crossings. It has completely disappeared after completion of the construction.

Eight years have already passed since then. The surface stations were dismantled and the surface tracks were removed. They have been changed to parks, pedestrian malls, public facilities and so on. The scenery of Keio line around Chofu station has been totally changed. Time really flies. 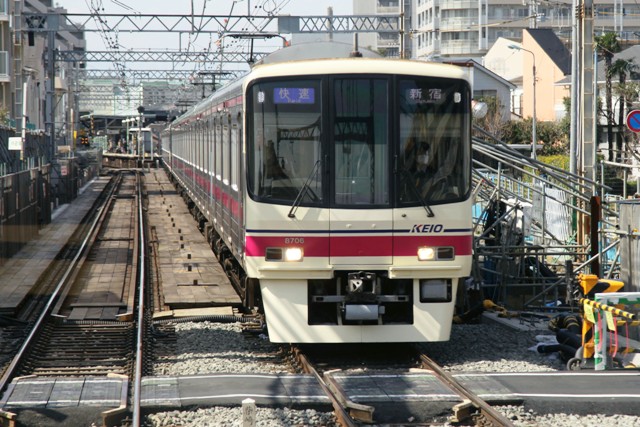 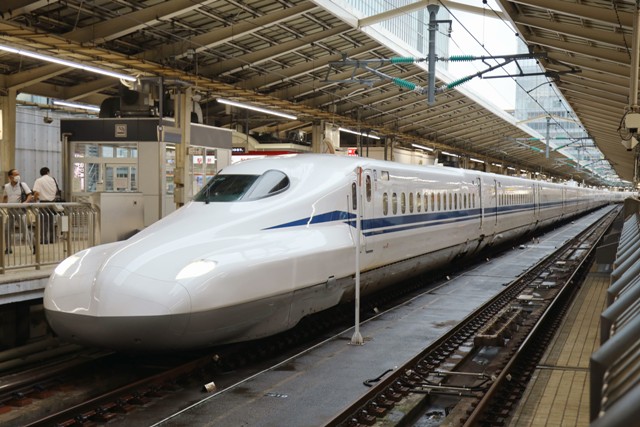 On July 1st, 2020, Central Japan Railway Company (JR Central) launched a new model, the EMU N700S (N700 Supreme) series, on their Tokaido Shinkansen. The introduction of the new Tokaido Shinkansen train was for the first time in 13 years.

The outer design of the N700S series is similar to that of the N700 and the N700A series, but there are several minor changes. For example, the frontal lamps were changed to LEDs. The shape of the nose became sharper. The number of the blue colored side stripes was increased from two to three. Regarding the interior, each seat of the N700S series has an electrical outlet. The reclining seats increased sitting comfort of passengers.

In terms of technical specifications, the N700S series has a full active vibration control device operated by a pump to prevent rolling. The maximum operating speed is 285 kilometers per hour due to the timetable restriction, but it recorded 362 kilometers per hour in a test run. JR Central plans to introduce a total of 40 sets (640 units) of the N700S series by the end of fiscal year 2022. It will be built by Hitachi Kasado Factory. 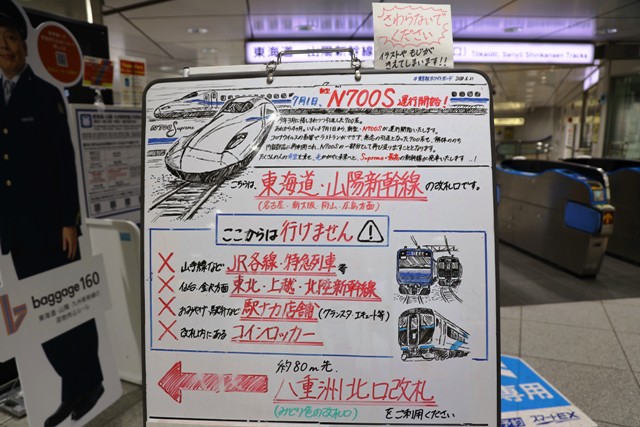 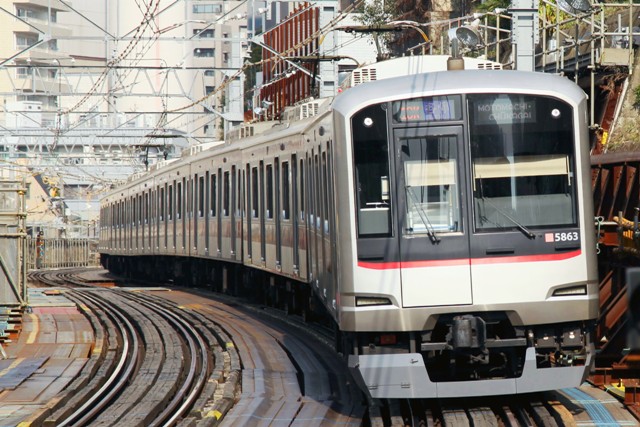 Seven years have already passed since Tokyu Railways moved their Toyoko line track from surface to underground between Shibuya and Daikanyama stations. I recently rediscovered old photographs of the ex-surface track on my hard disk. They were taken in February, 2012, one year before completion of the underground track. You can see a curved track with several construction works for transfer of the track.

Incidentally, the train in the photograph is the EMU Tokyu 5050 series launched in 2004. 36 sets (308 units) are currently operated on the Toyoko line. They are 8-car trains (26 sets) and 10-car trains (10 sets). The 8-car train is composed of four motorcars and four trailers (4M4T); meanwhile, the 10-car train consists of five motorcars and five trailers (5M5T). The 10-car train is also called the EMU 5050-4000 series, and directly operated onto the Tokyo Metro and the Seibu lines via Shibuya station. Set number 4110 (4110F) of the 5050-4000 series is a special poster train named "Hikarie". It is a unique poster train with yellow colored bodies to promote Shibuya Hikarie, which is Tokyu's advanced skyscraper and retail complex in the Shibuya area.

Redevelopment of the Shibuya area is still ongoing. 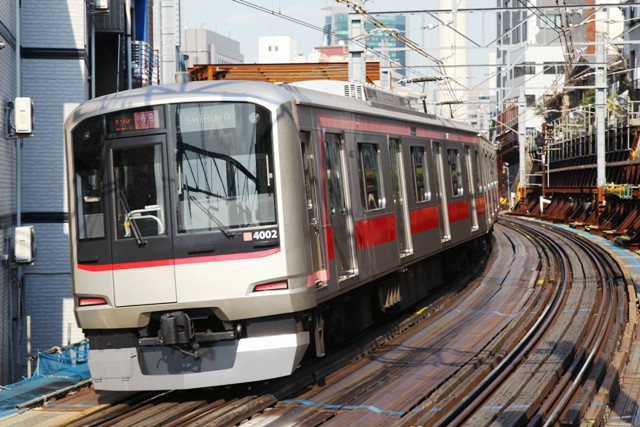 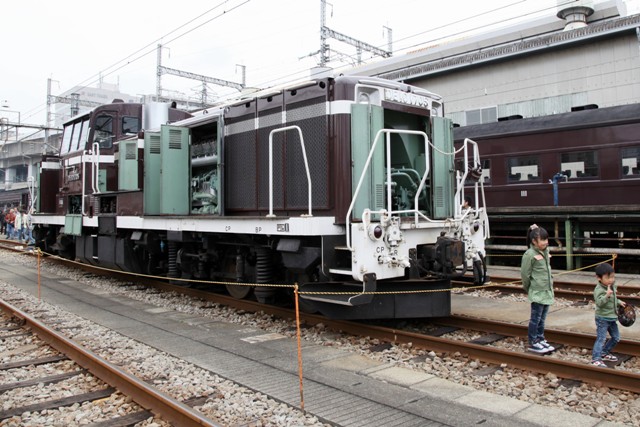 Following the JNR-colored electric locomotive, I'm going to show you a unique diesel locomotive (DL) photo, which I recently rediscovered on my hard disk.

The DL Class DE10 was launched in 1966 by Japanese National Railways to replace out-of-date steam locomotives on the local lines. 708 units of the DE10 were built from 1966 to 1978 by Nippon Sharyo, Kisha Seizo, Hitachi and Kawasaki Heavy Industries. The axis arrangement of the DE10 is Ao+Ao+Ao+Bo in UIC notation. It has a 1,350 (or 1,250) PS diesel engine per unit. The maximum speed is 85 kilometers per hour. The DE10 was once operated throughout Japan as passenger and freight trains; however, its current role is a switching engine in the rail yards.

Among the above 708 units of Class DE10 DLs, unit 1705 (DE10 1705) is quite unique. It has a chocolate colored body. DE10 1705 belongs to JR East Taksaki rail yard in Gumma Prefecture. It was built in 1974 by Kawasaki Heavy Industries. I came across this chocolate colored DL at an event for rail-fans, named "Takasaki tetsudo fureai day (Takasaki railway communication day)" in 2013. DE10 1705 was very popular among rail-fans at the event site, as its chocolate colored body was rare and beautiful.

What will be the future of the Class DE10? It will be replaced by new models such as JR Freight's DL, Class DE200 or a hybrid locomotive, Class HD300. I hope that the old DE10 will be operated in good condition for some time now. 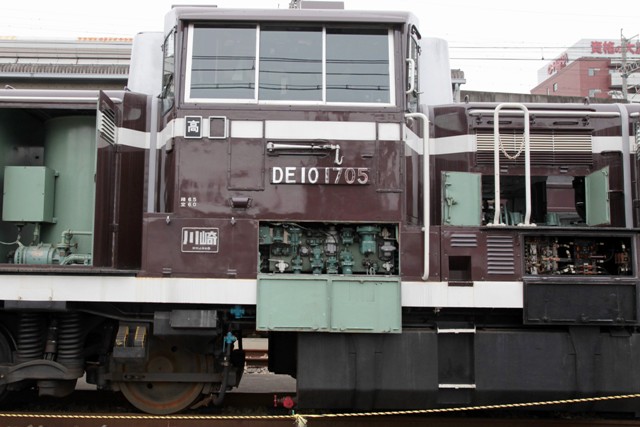 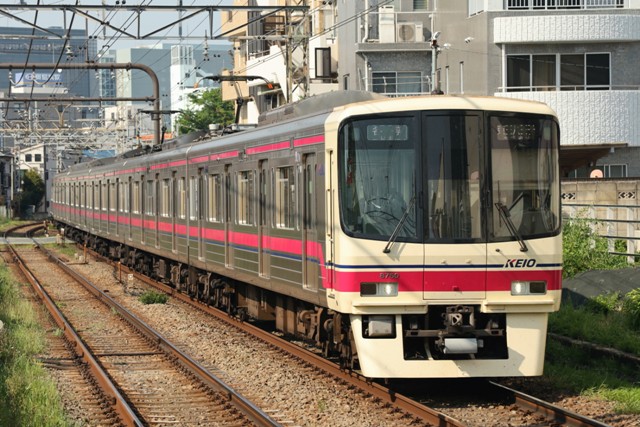 One month has passed since the state of emergency declaration caused by the new coronavirus was lifted nationwide by the Japanese government. Public facilities such as museums and theaters were reopened one after another. I recently visited Jindai Botanical Garden operated by the Tokyo Metropolitan Government for the first time in a while.

Jindai Botanical Garden has a long history. It was a nursery garden for boulevard trees before WWII. The garden was then changed to the botanical garden, and opened to the public in 1960. I still remember that I made an excursion to this garden with my friends and teachers when I was a kindergartner. My favorite spot is a rose garden. It was a late blooming season. I could enjoy the colorful blossoms and the sweet fragrances of 400 kinds of roses.

To visit this historical garden, the nearest station is Tsutsujigaoka on the Keio line. On the way back home, I enjoyed taking photographs of the Keio trains for a while. I shot an EMU 8000 series train. The 8000 series was launched in 1992 as the first EMU to adopt the VVVF (variable frequency drive) control system on the Keio line. 245 units were built by Nippon Sharyo and Tokyu Sharyo. I found that the front lights of the 8000 series were changed from sealed beam lamps to LEDs. It's fun for me to find such minor change on the trains as a train spotter.

I enjoyed both beautiful roses and Keio's stylish trains. 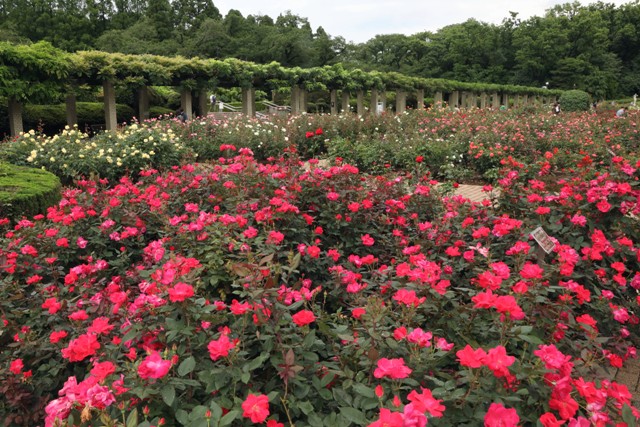 The rose garden of Jindai Botanical Garden near Tsutsujigaoka station on the Keio line
Labels: Keio 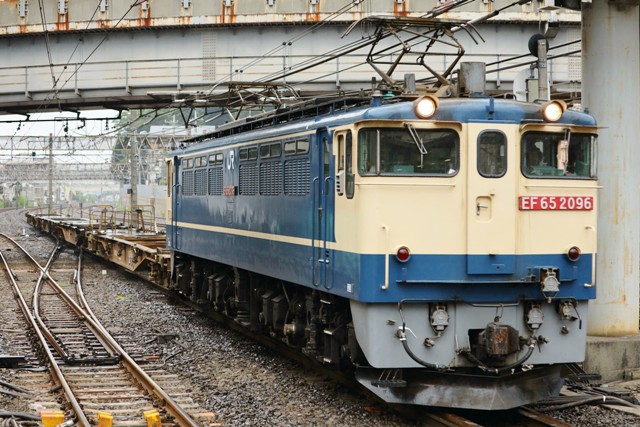 On the way back from Hinuma Natural Park last month, I came across a freight train pulled by an old electric locomotive (EL) at Matsudo station on the Joban line. It was unit number 2096 of the JR Freight (JRF) Class EF65

The EF65 is one of the representative ELs in Japan. It was commissioned in 1965 as a new standard EL to replace the old model, Class EF60. 308 units were built from 1965 to 1979 by Kawasaki Heavy Industries, Toshiba, Nippon Sharyo and so on. 53 units are still operated by JRF, JR East and JR West. The axis arrangement is Bo-Bo-Bo in UIC notation. Six sets of 425 kW DC motors are mounted.

A Recent topic of the EF65 is its body color change. Many units were returned to so-called "JNR color" as a rail-fans service. JNR stands for Japanese National Railways, which was abolished and split into seven JR companies in 1987. The JNR-colored ELs are still very popular among rail-fans, since JNR operated popular overnight sleeper trains such as Asakaze and Sakura pulled by JNR-colored ELs.

When will all units of the EF65 retire? I don't know exactly, but it's not a long way off. The successor of the EF65 is the EF210, which was launched in 1996. Pulling a total of 1,300 ton cargo container wagons, the EE210 can travel with a maximum speed of 110 kilometers per hour. I hope that the old EF65 will be operated in good condition for some time now. 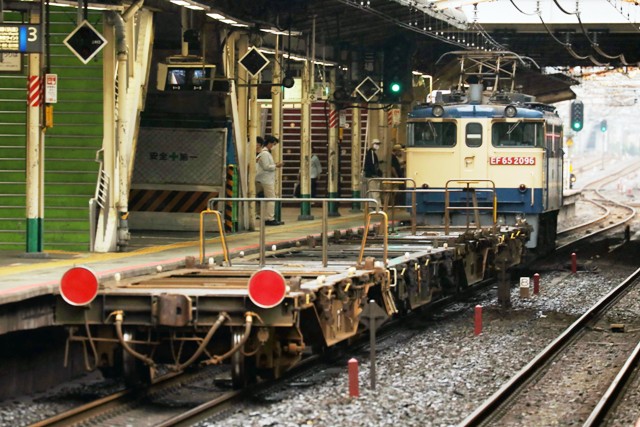 A freight train pulled by an EL, JRF EF65 2096, passes through Matsudo station