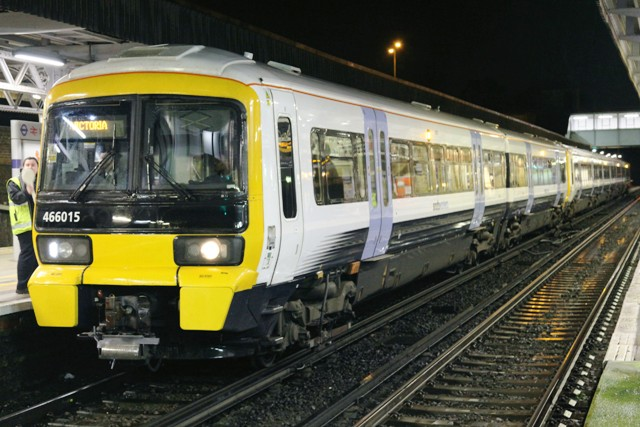 
This is continued from my blog on February 15th. After finishing my meeting in Central London, I headed to Bromley, a southeastern suburb of London City, to meet with a British rail fan. To get to Bromley, the Southeastern Line was convenient from Victoria Terminal.

My train, "Networker", was bound for Orpington being composed of Classes 465 (4 cars) and 466 (2 cars). It was crowded because of the evening rush hour. I saw many businessmen and businesswomen boarding. They were looking at their cellular phones, listening to music, reading books or just relaxing. Different from the commuter trains in Tokyo, there were not many people who were napping. "Networker" travelled slowly in the downtown area, but it increased speed after leaving Herne Hill. My twilight journey went by at lighting speed. 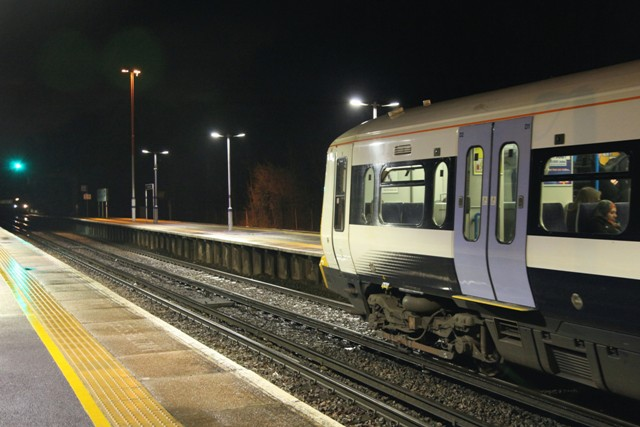 Side view of the Class 465
Labels: Outside Japan

Inauguration of the Tozai Line in Sendai City 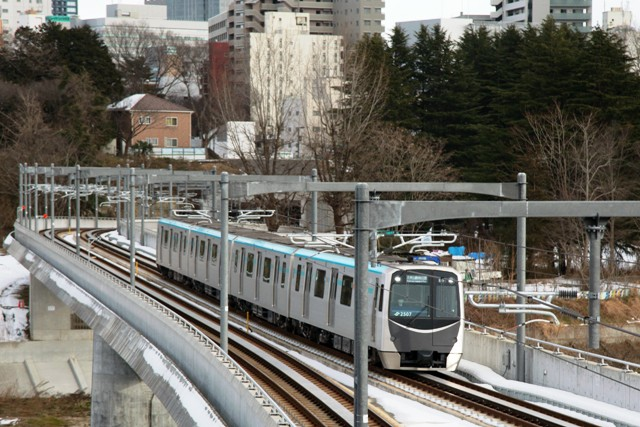 Transportation Bureau of Sendai City then commenced construction of the second route, namely Tozai Line, in 2007. Connecting Yagiyama Zoological Park and Arai, the route length is 13.9 km. The gauge size is 1,435 mm and the electric system is 1,500 V DC overhead. Linear motor technology is adopted for the train driving system. Same as the Green Line of Yokohama Municipal Subway and the Ooedo Line of Tokyo Metropolitan Government, you can see a reaction plate between the two rails.

The train, being operated on the Tozai Line, is the EMU 2000 series. It is a 4-car train with two motor cars. So far, a total of 15 sets, 60 units, have been built by Kinki Sharyo. Automatic train operation system is adopted, so a train crew just pushes a button when the train leaves a station. The train runs without a conductor on board, as the Tozai Line has fewer passengers than that of the busy commuter lines in Tokyo. The design of the train is quite unique. Its face is in imitation of the warrior's helmet of Date family, which was a feudal load in the Sendai area. Cool!

In the meantime, I have linked to "Tokyo in N Scale", which is a blog following the progress of an N Scale module based on a small part of a large city, namely Tokyo. 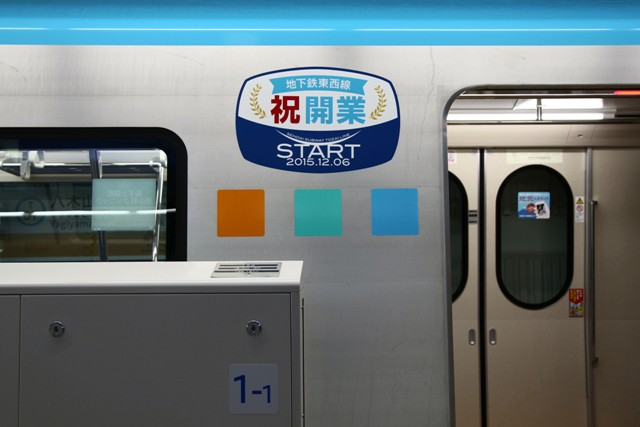 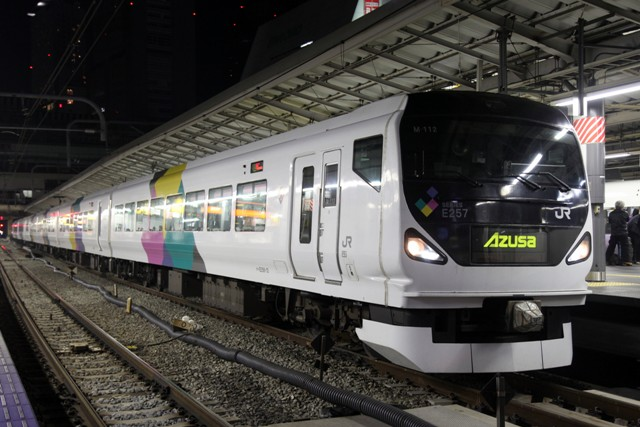 Winter illumination season is coming to an end. Winter is known as the season of "street illuminations" in Japan. Urban streets are nicely decorated with millions of LED lights. I don't know exactly what the origin of this event was, but it can be traced to the Christmas lights to attract customers to shopping malls.

I visited the Southern Terrace of Shinjuku Station, where an illumination event was being held. I saw many couples and families, who were sewing in the woods of lights, called "Minamillumi". Minamillumi is a compound word of minami (south) in Japanese and illumination in English. There is a flood of English words in our everyday language in this country.

In the meantime, we can see frequently arriving and departing trains at JR East Shinjuku Station. Limited express, Azusa, is one of the representative trains departing from this busy terminal. Connecting Shinjuku and Matsumoto, it travels in the steep backbone mountains of Japan.

Along with the E351 series (Super-Azusa), the E257 series (Azusa) is famous among travelers to Yamanashi and Nagano prefectures. It was launched in 2001 to replace the old EMU, 183 and 189 series. A total of 21 sets, 154 units, have been built by Hitachi, Kinki Sharyo, and Tokyu Sharyo. Different from the E351, the E257 series doesn't have a tilting system to pass through tight curves in mountain ranges at high speed, but the center of gravity on the body of the 257 is low to mitigate centrifugal forces. 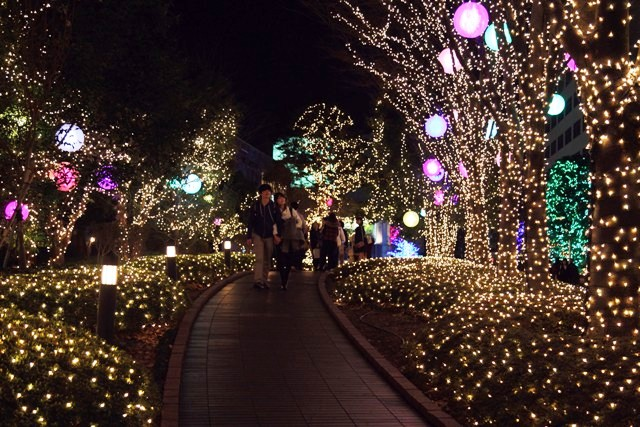 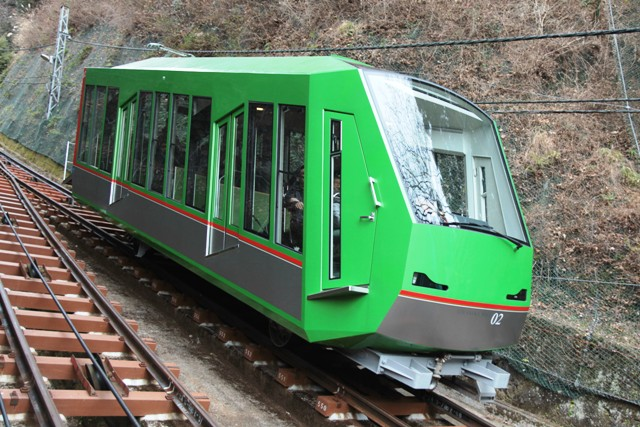 The Ooyama Cable Line is a funicular route in Isehara City, Kanagawa Prefecture, about 60 km southwest of Tokyo. The route was originally opened in 1931, but suspended in 1944 due to WWII. The operation was resumed in 1965 by newly established Ooyama Sightseeing Electric Railway Company, using the second generation vehicles called Tanzawa and Ooyama.

On October 1st last year, the third generation model, namely unit number 1 and 2, was launched. It was designed by Okabe Noriaki, who also designed the electric car 3000 series, "Allegra", for the Hakone Tozan Railway in 2014. The green colored bodies with gold and silver colored stripes are vivid and glorious. In timing with introducing the new model, the overhead wire on the track was removed, because it had been interrupting passengers' views. Instead of the wire, a lithium-ion battery is installed on each vehicle for supplying the electricity of indoor lights and in-car announcement apparatus. For your information, the vehicles still have pantographs for charging while standing at stations through rigid body overhead lines, which are installed only at the stations.

Connecting Ooyama Cable and Afuri Shrine stations, the route length of the Ooyama Cable Line is 0.8 km. There is one intermediate station, Ooyamadera, at the mid-point of the line. The height difference between the highest and lowest points of the route is 278 m. The maximum inclination of the route is 25.5 degrees. The track gauge size is 1,067 mm. 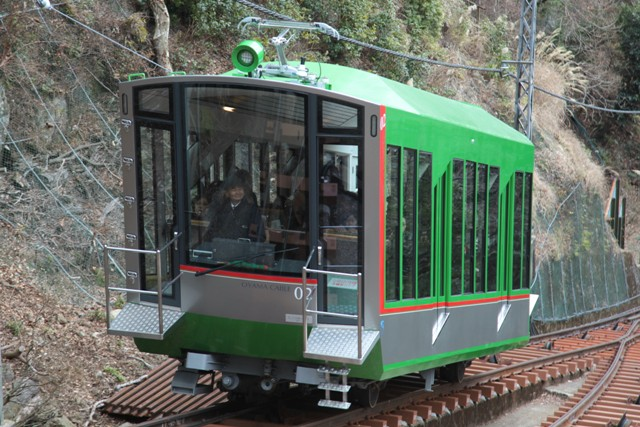 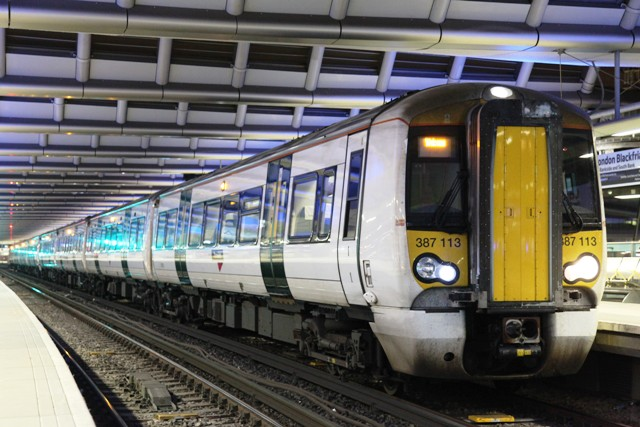 
Recently, I visited London for the first time in five years. Although I was very busy there, I tried to make an opportunity to ride the trains in this capital city. What was new with the railways in London?

Different from Japanese commuter trains, the maximum speed of the Class 387 is very high... 110 MPH (175 km/hour). It is probably because the gauge size (1,435 mm) is wider than those of Japanese commuter lines (1,067 mm). It is to be a bit regretted that the train speed is very low in the central part of London due to congestion of trains. Obviously, double-double tracks are insufficient in London. That is a useless treasure.

The interior of the Class 387 was my favorite. Specifically, the cross seats with folding tables were convenient for passengers. I could just relax and enjoyed the short journey to the suburban area of London City in the twilight. 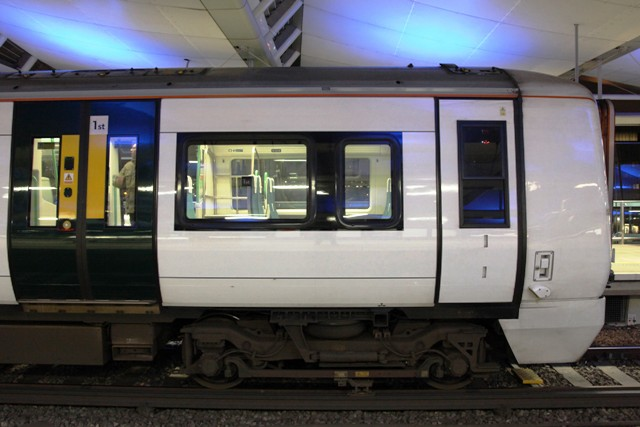 Side view of the EMU Class 387
Labels: Outside Japan 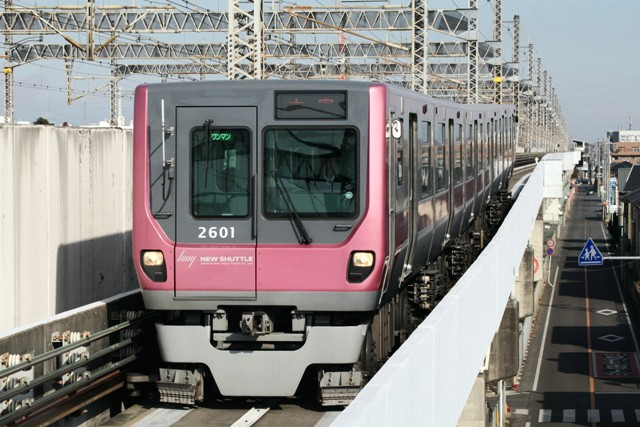 EMU the New Shuttle 2000 series arrives at Komba Station
As I reported before, the New Shuttle (Saitama Shin-toshi Kotsu) is a rubber-tired automated guideway transit (AGT) system in Saitama Prefecture. The route was opened in 1983 beside the Tohoku and Joetsu Shinkansen tracks.

One of the pleasures for rail-fans is to see both the Shinkansen and the New Shuttle trains running adjoining each other on the tracks. It is indeed a good contrast and a photogenic scene if the timing is right. 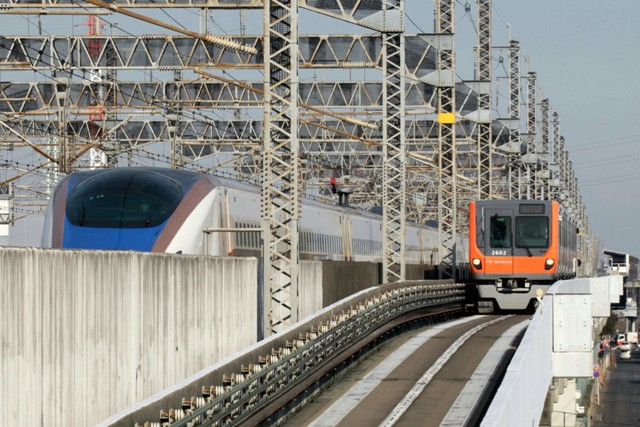 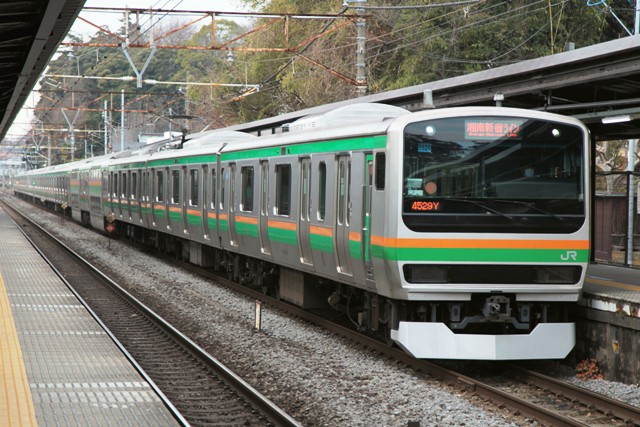 EMU JR East E231 series arrives at Kita-Kamakura Station on the Yokosuka Line
I visited Kamakura for the first time in a year to enjoy a stroll with my family. As you may know, Kamakura is a historic city where the Shogunate government was located from 1185 to 1333. That means Kamakura was the substantial capital of Japan during those 148 years, although successive Emperors lived in Kyoto during that period.

Kamakura is located about 50 km southwest of Tokyo. It takes about one hour from downtown Tokyo by JR East's commuter train. If you come from Shinjuku, please take the Shonan-Shijuku Line train. About half of the Shonan-Shinjuku Line trains are directly operated into the Yokosuka Line to Kamakura Station. Your vehicles will be the EMU E231 or the E233-3000 series. I recommend you use a double-decked Green Car (the first class) equipped with comfortable reclining seat. You can feel like you are gorgeous traveling by only paying an extra cost of $6.50.

Specifically, I was impressed with the large Zen garden behind the Hojo building incorporating with the scenery of mountains behind the temple. I couldn't believe that this quiet garden was located just next to the lively city of Kamakura. 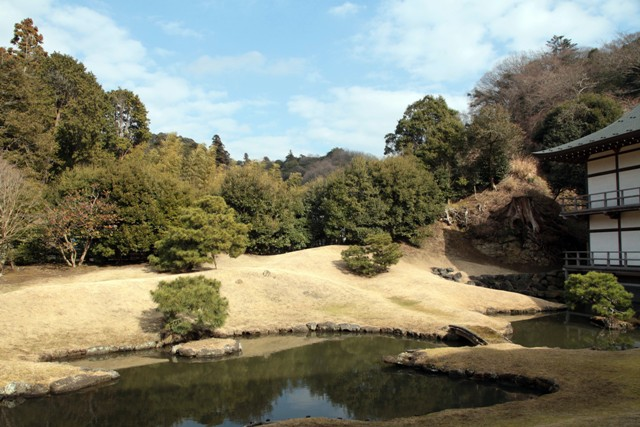 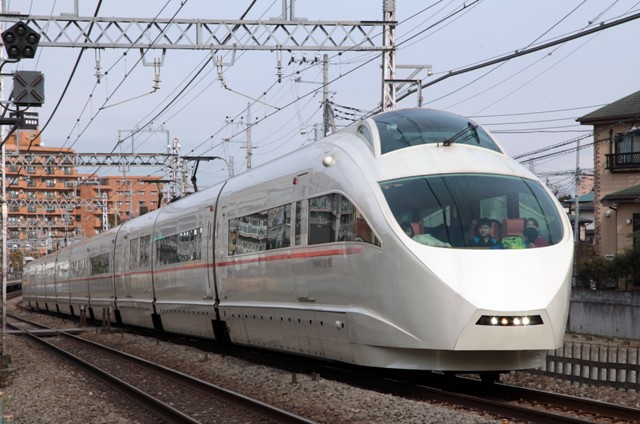 Why is Romance Car VSE popular among the tourists?

Firstly, the cockpit is up stairs. That means the passengers can enjoy a front view through the wide windows. In fact, the front observation deck seats are always fully booked. It is difficult to secure them. Secondly, the exterior design is futuristic. Specifically, the canopy architecture with a long front nose is cool. The white colored body with a vermillion colored stripe has high-class quality and cleanliness. Thirdly, the interior is also devised for sightseers. For instance, the seats are slightly inclined to the window direction to enjoy outer views.

VSE is a 10-car train with articulated bogies, so, the total length of one set is not long... 146.8 meters. A total of two sets, 20 units, have been built by Nippon Sharyo. Japan Rail-fan Club (JRC) elected VSE as the 2006 Blue Ribbon Prize. This prize is awarded to the best train, which was launched in the previous year. The reasons for the award to VSE were not only the design, but also incorporation of advanced technologies such as the truck steering control system and the body tilting device for tight curves.

The VSE era is going to go on. 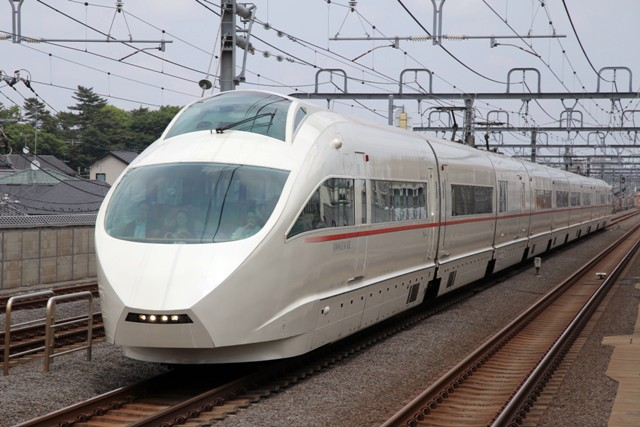 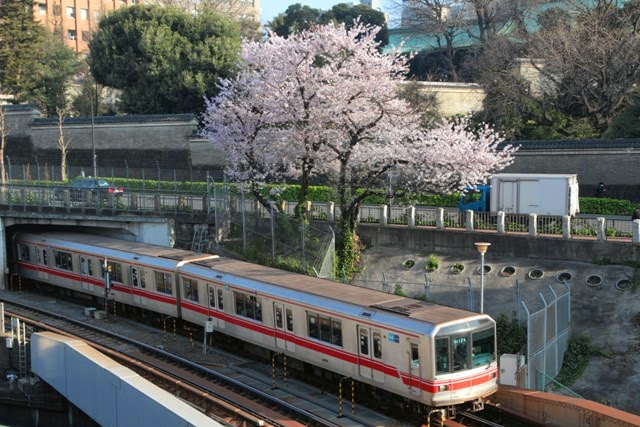 The cold wave remains in the Tokyo metropolitan area. I can hardly wait for spring. To invite the warm flower season, I am going to show you last year's sakura (cherry blossom) pictures from my photo storage.

One of my pleasures in spring is "fixed point sakura observation" from platform number 4 of Ochanomizu Station on the Chuo Line. I have been paying attention to a sakura tree near the station. It is a single tree planted beside the Tokyo Metro Marunouchi Line, on which the train crosses the Kanda River near Ochanomizu Station traveling above ground.

At the end of March, this young tree bears an abundance of glorious light-pink-colored blossoms. I shot it in 2013, 2014 and 2015. The tree has been growing and the number of blossoms has also been increasing. The autumn leaves are also lovely in this spot. Blooming, autumn leaves, then, blooming again... Ochanomizu is my favorite spot to see the different seasons and the rebirth of springtime.

The happy trains, which can observe this full-blown sakura tree, are the EMU Tokyo Metro 02 series on the Marunouchi Line and the EMU JR East 233 series on the Chuo Rapid Line. The former was launched in 1988, while the latter debuted in 2008, twenty years apart.

I am going to continue to report on the fixed point sakura observation and the trains passing by the sakura tree for as long as I can. 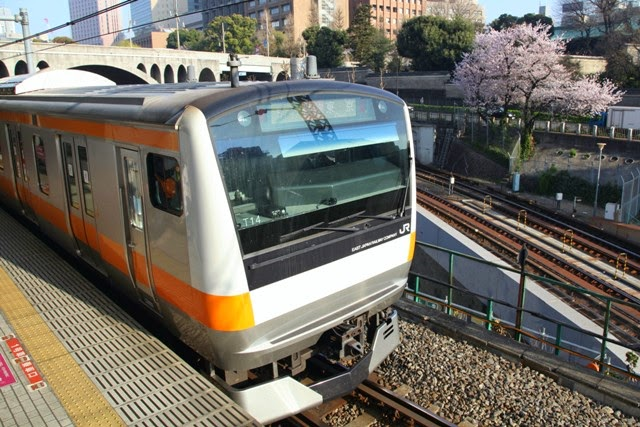