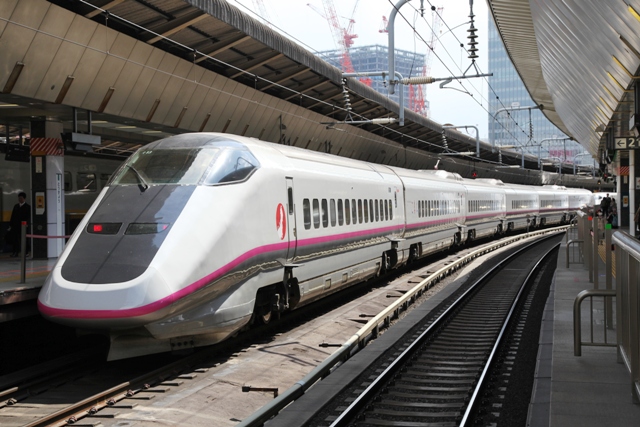 Following my blog on August 15th, I am introducing another "Mini-shinkansen" train today. That is the EMU JR East E3 series, "Komachi" super-express with a maximum speed of 275km/h (see the top photo).

The train name "Komachi" comes from a lady, Ms. Komachi Ono (825 - 900), who was born in Akita Prefecture in the early 9th century. She was a poet and noted as a rare beauty. So, Komachi is a symbol of a beautiful woman in Japan.

As its name indicates, the EMU E3 series Komachi is also beautiful. A sharp and prominent nose, a slightly rounded body-line and pearl colored body with a hot pink stripe are very attractive.

One of the features of the EMU E3 series Komachi operation is coupling with other shinkansen trains. We see that Komachi, which leaves Tokyo, is often coupled with the E2 series Hayate (see the bottom photo). Then, Komachi is detached after arriving at Morioka Station, and runs by itself to Akita, because the route between Morioka and Akita is constructed as a so-called "Mini-shinkansen". It means that standard sized shinkansen trains, such as the E2, E4 and E5 series are unable to enter the mini-shinkansen sections.

The EMU E3 series was launched in 1997, when the Akita Shikansen line was opened. 14 years has already passed so JR East plans to introduce a new generation train, the EMU E6 series, to this route. A prototype train has been completed, and test runs are being made. I will introduce this brand-new technology train someday in the future. 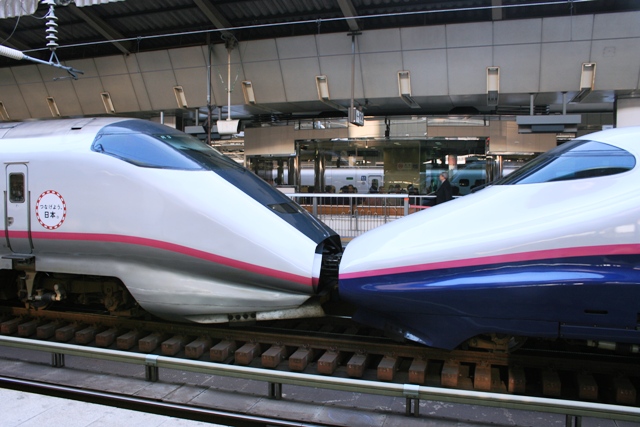