As I introduced in my blog on April 20th, 2011, Tamaden (Tokyu Tamagawa Line) was an old tramway in Tokyo. It was constructed on the highway Route 246 in 1907. Unfortunately, the Tamaden was abolished in 1969 due to heavy traffic jams, but the subway Shin-Tamagawa Line (present Denentoshi Line) was newly opened in 1977 under Route 246 as a subway line.

Although Tamaden has quickly faded into history, a well-known electric car, Type DeHa 200, is still preserved in the Tokyu Museum of Trains and Busses next to Miyazakidai Station on the Tokyu-Denentoshi Line (see the top photo).

Type DeHa 200 was launched in 1955. It is an articulated two-car tram. A total of 6 sets were manufactured by Tokyu Sharyo Company. One of the prominent features of this electric car is its low floor. The height of the floor is only 59 cm above the railway track. It was nothing less than epoch-making at the time. The single axle articulated truck was also quite unique (see the following photo).

As a rail-fan, the egg-shaped rounded body is my favorite. It is very "kawaii (lovely)". I still remember that I waited for a long time to ride Type DeHa 200 at Shibuya Station in my childhood. Just by chance on that very day, Type DeHa 200 took a long time to get there.

The track of Tamaden disappeared a long time ago; however, I can still see Type DeHa 200 in the Tokyu Museum, whenever I want. It makes me happy and satisfied. 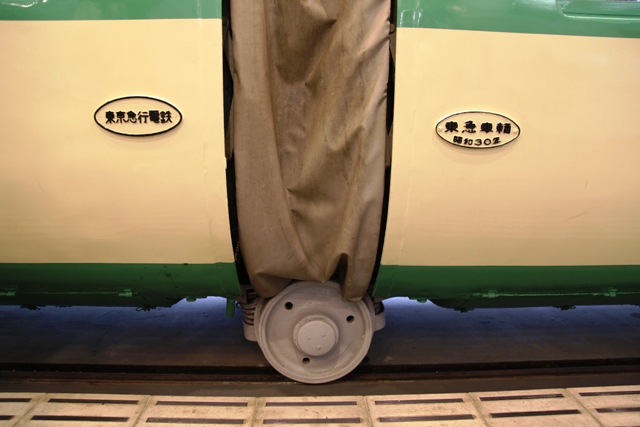 More information about Tokyu Museum of Trains and Busses (in Japanese): http://www.tokyu.co.jp/railway/railway/west/link/museum.html