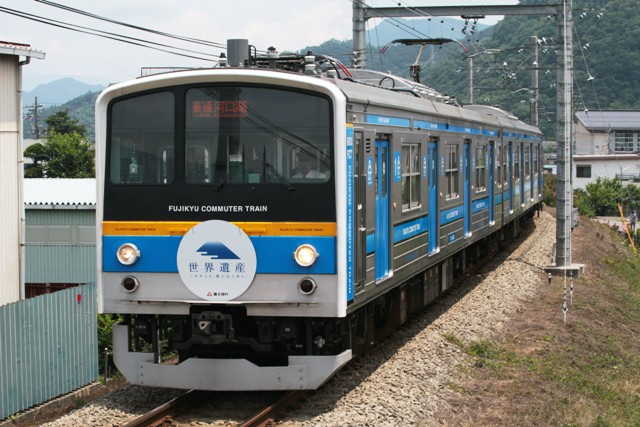 EMU Fujikyu 6000 (ex-JR East 205) series arrives at Tsuru-bunka-daigaku-mae Station
Fujikyu is making good progress. It is a small private railway company at the foot of Mt. Fuji, but has a rare opportunity to expand its business now. Why? It is because Mt. Fuji was designated as a World Heritage Site last month. In fact, this news has brought a large benefit to Fujikyu. For instance, the share price of Fujikyu in the Tokyo Stock Exchange has currently hit its highest in the past 23 years since 1990. As you may know, the year 1990 was the peak of the "bubble economy" in Japan.

Fujikyu has recently launched a new train. Look at the photo. It is the EMU 6000 series. Do you remember this design? It was originally the EMU JR East 205 series being operated on the Keiyo Line. Fujikyu purchased 6 units of the 205 series from JR East last year, and modified them to operate on the Fujikyu Line. For example, cold and snow resistant systems have been added. The interior renovation has also been conducted by a famous designer, Eiji Mitooka, who has a great deal of experience designing the latest trains such as the EMU JR Kyushu 800 series on the Kyushu Shinkansen. I like this sky blue colored renovated train with a yellow stripe on the front. Specifically, the sky blue colored doors are very cute, aren't they?

A new train and the new World Heritage... the Mt. Fuji area has entered an exciting new era. 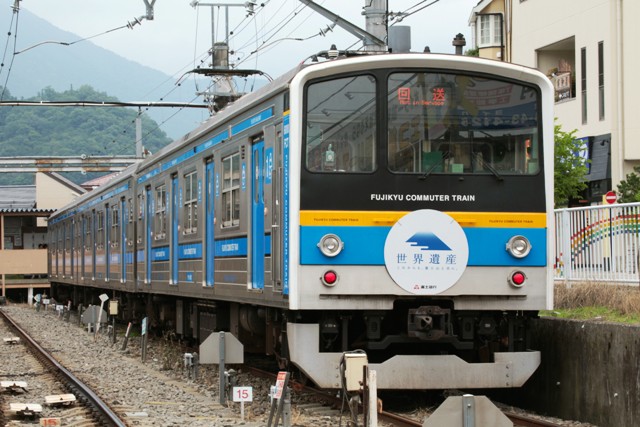