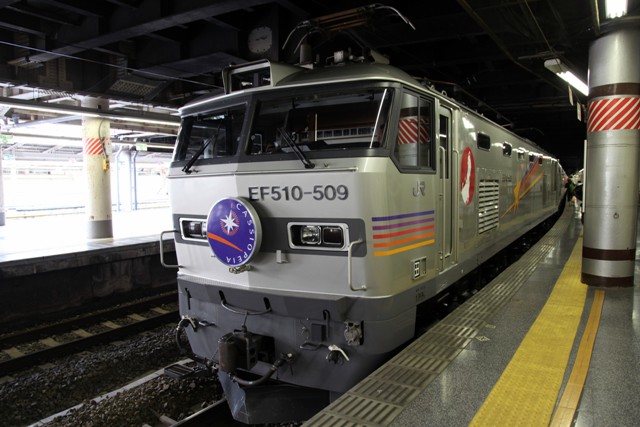 Electric locomotive EF510-509 for the overnight sleeper train, "Cassiopeia", stands at Ueno Station
As I mentioned before, Cassiopeia is the most reputable sleeper train in Japan. Connecting Ueno and Sapporo, Cassiopeia is directly operated from the Tokyo metropolitan area to Hokkaido Island passing through the 53.85-kilometer-long Seikan Submarine Tunnel. It takes about 17 hours to get to Sapporo from Ueno.

To book the seats is very difficult, as it is very popular among travelers. Especially, in the summer holiday season, it is called a "platinum ticket". As you may know, it is cool even in summer in Hokkaido, since it is located in the northernmost part of the Japanese archipelago.

One day, I visited Ueno Station to see Cassiopeia in the summer season. It was hustle-bustle on platform number 13. Most passengers were families, who would spend their vacations on Hokkaido Island. They were taking pictures of Cassiopeia train before leaving the station.

Cassiopeia is a 12-car train pulled by an electric locomotive (EL), type EF510-500. The EL of the day was the silver-colored EF510-509 of the Tabata Rail Yard (see the top photo). Having displayed the plate of "Cassiopeia", the shining body was very cool. This locomotive would be switched to type ED79 to pass through the Seikan Tunnel. It would be, then, switched again to the diesel locomotive, type DD51 on the un-electrified route on Hokkaido Island.

At 4.20pm, Cassiopeia left for Sapporo right on schedule. Many passengers waved their hands smiling and relaxing. Enjoy the ride and journey to Hokkaido. Next time it is my turn. 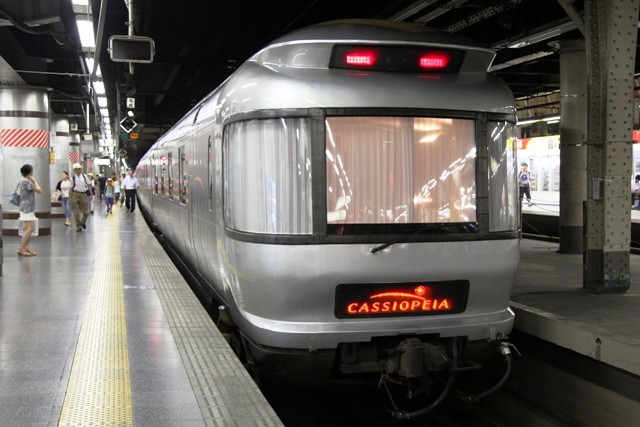