EMU Tokyo Monorail 10000 series travels on the Haneda Airport Line
As I mentioned before, Tokyo Monorail Company will celebrate the 50th anniversary of the Haneda Airport Line on September 17th of this year. Following the launching of a special meorial colored train, the company has recently launched a new model, the EMU 10000 series in commemoration of the anniversary.

The Haneda Airport Line was opened between Hamamatsu-cho on the JNR (present JR East) Yamanote Line and Haneda Airport on September 17th in 1964 as an airport access route from downtown Tokyo to Tokyo International Airport (Haneda). There were only 2 terminal stations at first; however, it expanded the number of en route stations later to take the role of not only airport access but also a commuter train. Currently, there are 11 stations over a total operating length of 17.8 km. The track is double and the electric system is 750 V DC. The maximum operating speed is 80 km/hour. The Haneda Airport Line is the oldest straddle-beam system monorail route in the Tokyo metropolitan area.

The EMU 10000 series consists of 6 cars. It covers 4 motor cars and 2 trailers (4M2T). The body is made of aluminum and the bogies are bolsterless. The IGBT-VVVF (variable-frequency drive) control system is applied. A green colored stripe above the windows is a good accent of the 10000 series. Train announcements are made in four languages, namely, Japanese, English, Chinese, and Korean. In-car LED displays are also broadcast in four languages.

Congratulations for over half a century of the Haneda Aiport Line! 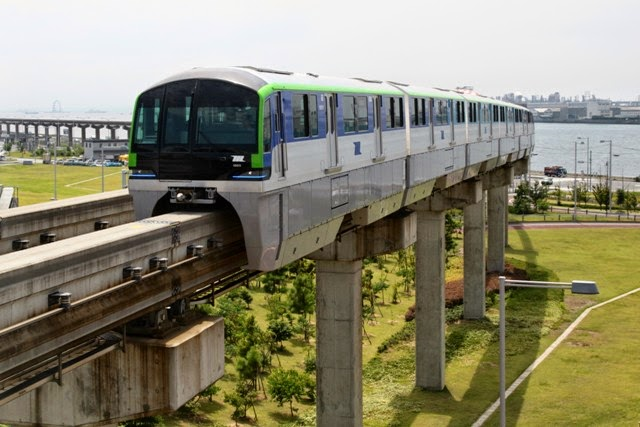