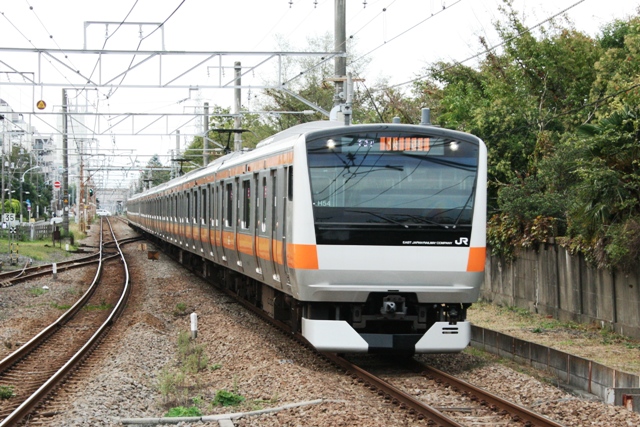 Following my blog on October 29th, I would like to introduce another kind of cosmos in Showa Kinen Park. That is "Sunset Yellow".

This romantic name of a flower originated in Mexico. Then, it moved to the United States and developed a wide variety of breeds there. It is said that the yellow colored cosmos was introduced to Japan in the Taisho Era (1912-1926; the reign of the Emperor Yoshihito). I like the straw color very much. It's neat and clean and shows up against the light green leaves. It seems that the Sunset Yellow field in Showa Kinen Park is a sort of heaven.

To visit this vast field of Sunset Yellow, please take the JR East Ome Line and get off at Nishi-tachikawa station, which is located in front of the Western Gate of Showa Kinen Park. It's convenient for visitors who live in a western suburb, because some of the trains operate directly from the Chuo Line into the Ome Line. The train is an orange colored EMU E233 series, which is same as the Chuo Line.

For your information, please do not forget that you have to push the manual operation button when you get off at Nishi-tachikawa Station, as the Ome Line is a local line in the countryside. The door operation is not provided by the conductor.

You will find a vast and yellow carpet-like Sunset Yellow cosmos field soon after entering the Western Gate. Now is the season when autumn begins to deepen in Japan. 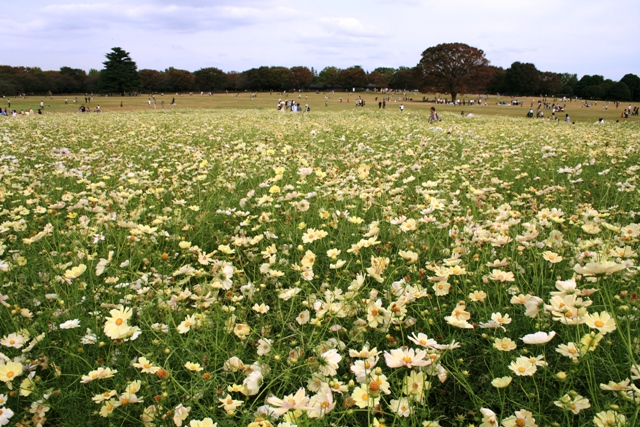