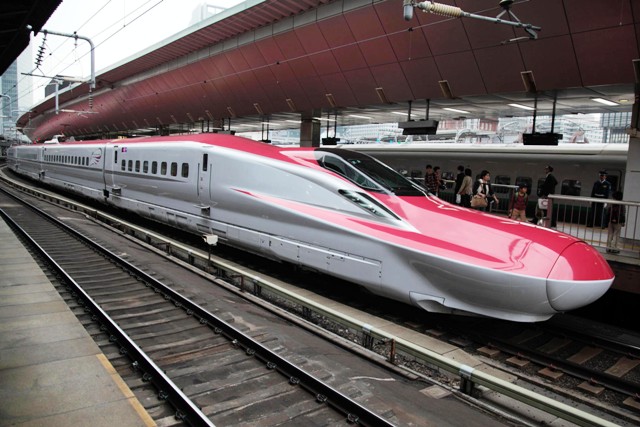 The E6 is a so-called "Mini-shinkansen" train (see my blog on August 15th and October 27th, 2011). It is the E3's successor on the Tohoku and the Akita Shinkansen. Just like the E3, the E6 series is coupled with other shinkansen trains, such as the E2 and the E5 series. It is operated with the other trains from Tokyo to Morioka. Then, the E6 is detached after arriving at Morioka Station, and runs by itself to Akita, since the route between Morioka and Akita is constructed as a Mini-shinkansen.

What would be the main differences between both trains, the E6 and the E3? It is the maximum speed. The E6 series is operated with a maximum speed of 300km/hour, meanwhile the E3 is designed to run at 275km/hour. JR East plans to raise the maximum speed of the E6 to 320km/hour early next year. The other difference between the two trains is their curve passage performance. By tilting the train's body using advanced technology, the E6 series is designed to operate at a speed of 320km/hour on a section which has a radius of curvature of 4000 m.

I first saw the E6 series, Super Komachi at Tokyo Station last week. The vivid colored body was very impressive. JR East calls this madder color "Japan Red". Japan Red will glow on the tracks in the Tohoku District from now on. 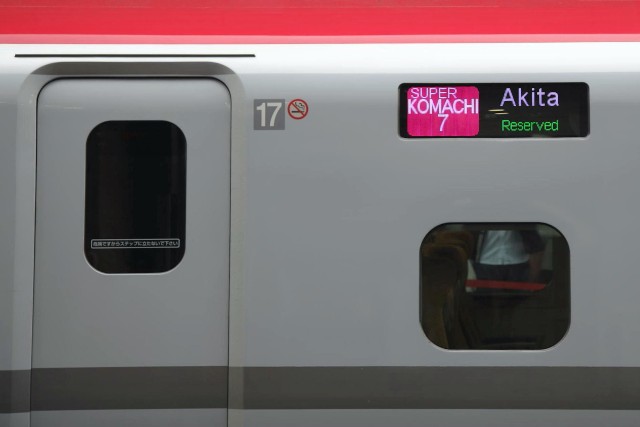