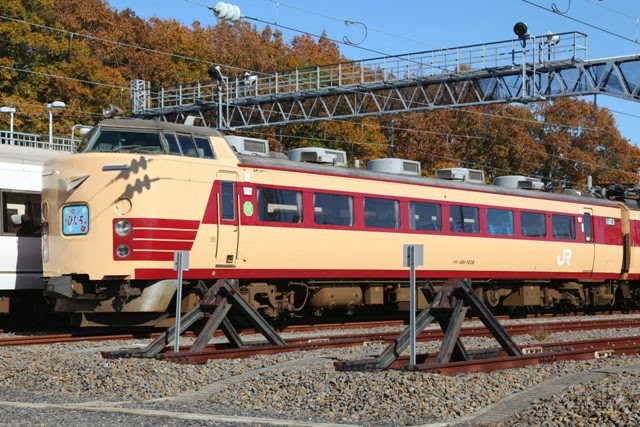 One of the features of the Mito Railway Communication Day event was that Uchihara Rail Yard became the venue of the "Hitachi Alumni Meeting" on the Joban Line. It means that previous and present trains for limited express, Hitachi, were brought together at the festival site.

The senior train was the EMU 485 series, which was operated from 1972 to 1998 as the first generation EMU of limited express, Hitachi. The 485 series was launched in 1968 as an AC-DC dual electric system train on the Japanese National Railways (JNR). It was able to be operated on both 50Hz (eastern part of Japan) and 60Hz (western part of Japan) sections of AC system tracks. Plenty of units were manufactured from 1968 to 1979 by Tokyu Sharyo, Nippon Sharyo, Kinki Sharyo, Kisha Kaisha, Kawasaki Heavy Industries and Hitachi (not a train, but a company name).

The body of the exhibited train is frequently called "JNR limited express color". Although JNR was split into seven railway companies and privatized as JR Group in 1987, many rail fans are still boosterish about this coloring, as it fits into any kind of scenery in Japan from urban business centers to mountain forests. For your information, the exhibited train was set number K1 that came the all way from Niigata Rail Yard for this festival.

Currently, the K1 is operated as limited express train, "Hokuetsu", which connects Niigata and Kanazawa along the Sea of Japan. 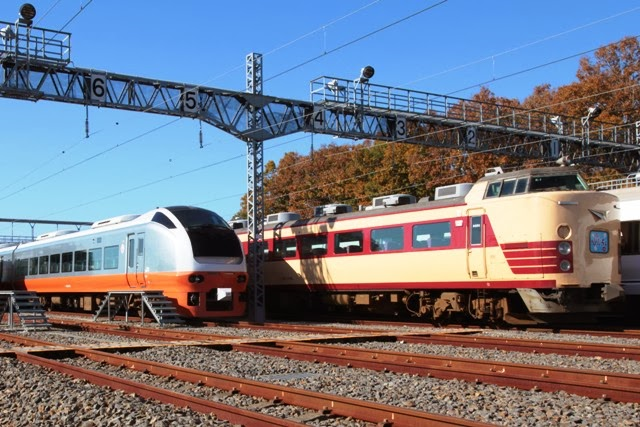