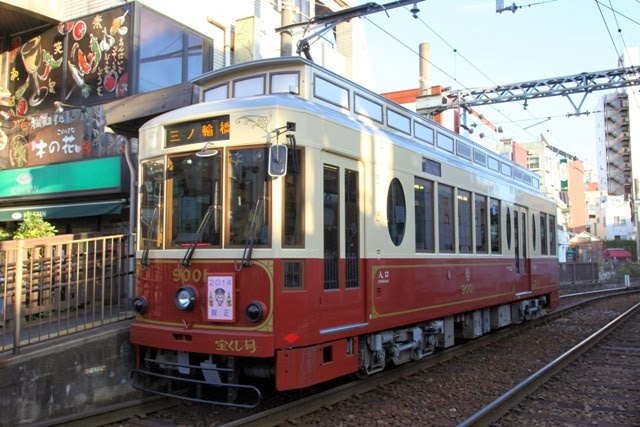 Electric rail car Toei 9000 series stands at Minowabashi Terminal on the Arakawa Line
Although a modern railway system has been developed, there are still two traditional tram routes in the Tokyo metropolitan area. One of them is the Tokyu-Setagaya Line and the other is the Toei-Arakawa Line. Today let me introduce you to the Toei-Arakawa Line, which is operated by Tokyo Metropolitan Government (Toei).

Tokyo once had a 181km-long tram network; but most routes were abolished due to heavy traffic jams. The Arakawa Line was a sole survivor, as it was constructed as an exclusive track. This route had been operated as two tram routes, namely Route 27 and 32. They were integrated into one route, the Arakawa Line, in 1974. Connecting Waseda and Minowabashi, its operating length is 12.2km. The track is 1,372mm dual-gauge. The electric system is 600V DC overhead.

The electric car 9000 series is the latest model on the Arakawa Line. It was commissioned in 2007. A total of 2 units have been manufactured so far by Aluna Sharyo. Each unit has a different color, red (unit 9001) and blue (unit 9002). Although the specification of the 9000 series has been modernized, the exterior design and interior atmosphere of this model remains retro-inspired. 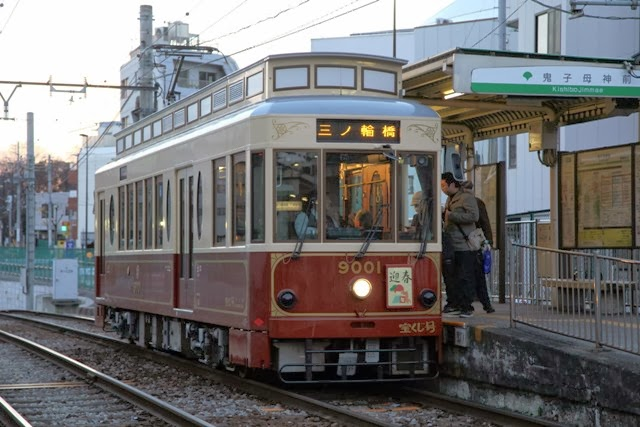