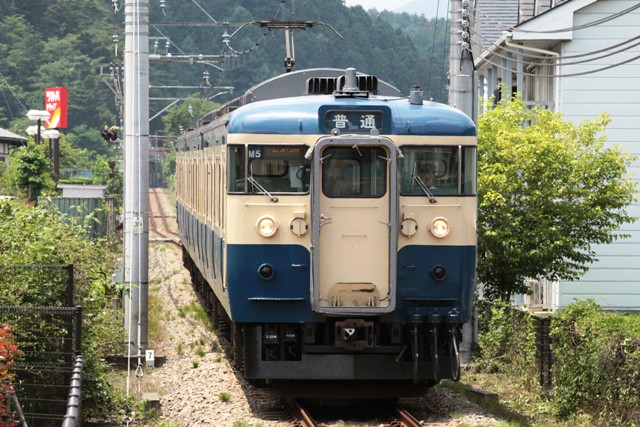 On Marh 14th, a new timetable started on the JR lines. The largest news was obviously the opening of Hokuriku Shinkansen between Nagano and Kanazawa stations, as I have already reported. Underneath the spectacular news, a reputable train, the EMU JR East 115 series is close to extinction on the Chuo Line. The 115 series is a standard local train commissioned by the Japanese National Railways (JNR) in 1963. Nearly 2,000 units had been manufactured for 20 years, but most of them have already been scrapped.

There are two kinds of the 115 series on the Chuo Line. One of them is the so-called Yokosuka-color train, which has a traditional two-toned (dark blue and beige) color design developed by JNR. All units belonged to Toyoda Depot in Tokyo Metropolis, but, currently, only one set is operated on the track belonging to Nagano Depot in Nagano Prefecture. The other one is the so-called Nagano-color train, which belongs to Nagano Depot. They have ivory colored bodies with light blue and emerald colored stripes. Currently, four sets are operated on the track, but will disappear soon.

Who is the successor of the 115 series? It is the EMU 211 series coming from the Takasaki, Utsunomiya and Tokaido lines. The 211 series has a stainless steel body with light blue and emerald colored stripes the same as Nagano-color trains.

Everything flows, nothing stands still.