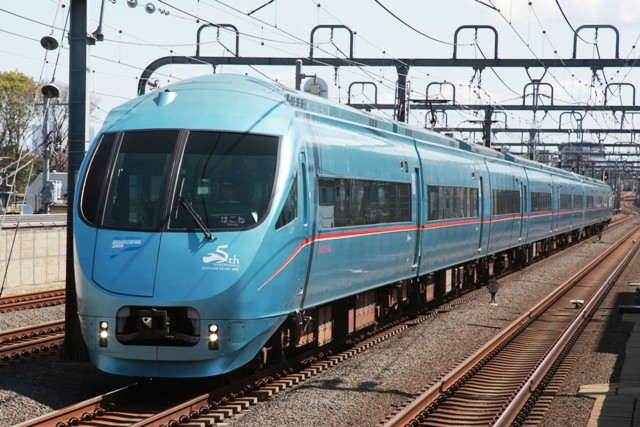 EMU Odakyu 60000 series, Romance Car "MSE" passes through Chitose-Funabashi Station
As I mentioned in my blog on June 25th, 2011, EMU Odakyu 60000 series, "MSE" is the newest model of the Romance Car fleet (see the top photo). It is operated between Shinjuku, a sub center of Tokyo, and Hakone, Gotemba and Enoshima, which are famous resorts in the Tokyo metropolitan area.

The recent trend of the romance car is to be used not only as a resort train, but also a commuter express. MSE is also operated between downtown Tokyo areas, such as Otemachi and Hibiya on the Tokyo Metro Chiyoda Line and Karakida, a commuter town in a western suburb of Tokyo.

MSE was launched in 2008. The train body is a metallic blue color with red and white stripes. It is composed of 10 cars, but one set can be broken up into six and four car sections to enhance operational flexibility. Timber-styled non-burnable materials are used heavily for the interior, such as the passenger seats and the walls. It offers the passengers peace and comfort.

On March 15th, 2013, Odakyu celebrated the 5th anniversary of the MSE operation. In commemoration of the 5th anniversary, a special sticker is being displayed on the front of the train (see the following photo). Time really flies.

I sometimes use the MSE to go back home after a hard day. While in the car, I am able to relax and enjoy reading or listening to music, while having a soft drink. It's indeed a "Petit-zeitaku" (small luxury and gratification) for Tokyoites. 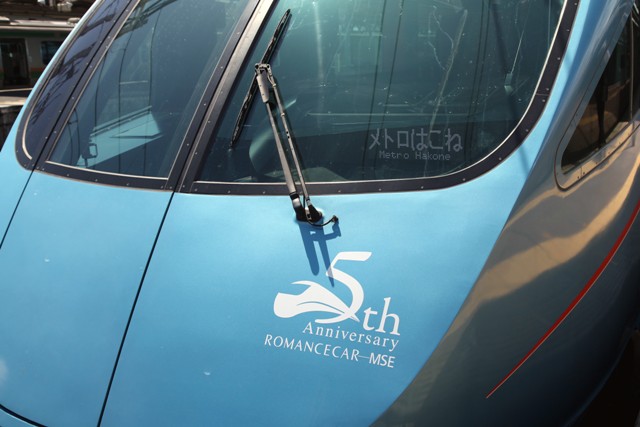