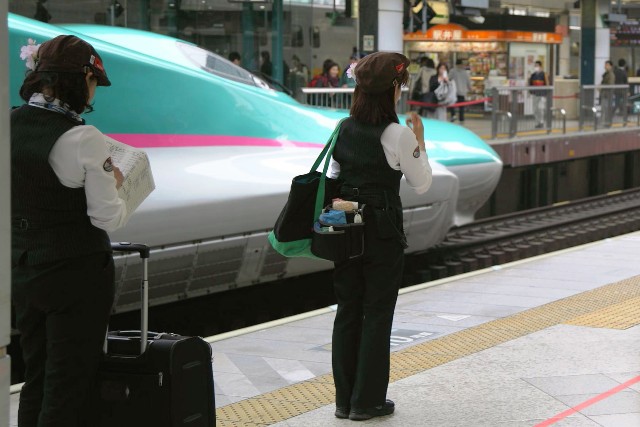 Lining up on the platform in Tokyo Sta., the train cleaning crew members wait for an arriving train.


If you get on a Shinkansen train at Tokyo Station, you should look for a group of men and women in matching uniforms. Lining up on the platform, they wait for an arriving train (see the top photo). When the train arrives, they bow politely to the train passengers (see the following photo). Then, after the opening of the train doors, they bow again to the disembarking passengers.

Their work has been praised by many people. For example, a major foreign news service has reported on the cleaning crew. The crew has gotten a lot of TV coverage as well. They are now stars. A popular book about them has also been published.

Indeed, they seem to be very quick. They are more like cleaning engineers than cleaners. According to the aforementioned book, one female crew member said, "I swallowed my pride when I became a cleaner; but, then I regained my pride after I put my back into the train cleaning." They are thoughtful words of inspiration.

As I write, the professional train cleaning crew is on the stage of Platforms 20 to 23 in Tokyo Station. 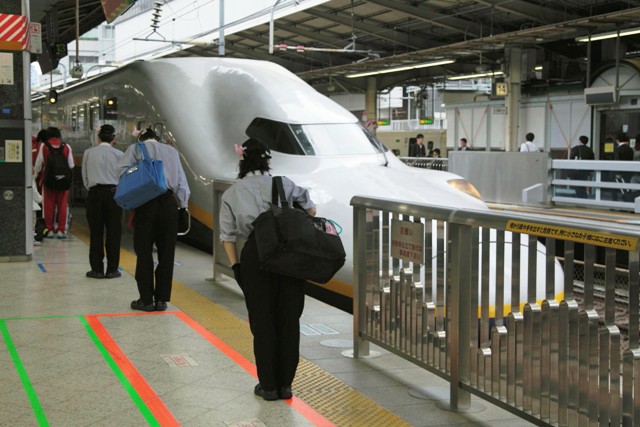 The train cleaning crew members bow politely to the passengers of the arriving train.