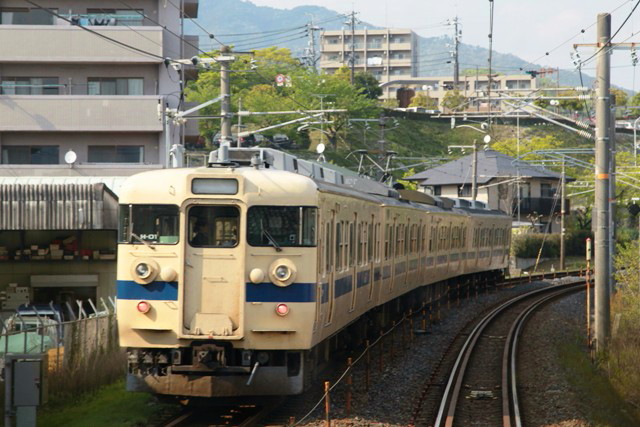 
Japanese take about one straight week of holidays during the so-called "Golden Week" starting from the end of April. This year, Golden Week refers to the period from April 27th to May 6th when there are four national holidays. Using Golden Week, I headed to the west with my family.

Our first destination was Iwakuni City in Yamaguchi Prefecture. It is located some 940km from Tokyo. Taking Shinkansen and the Sanyo Main Line, It takes around five hours by train. Our first target was precious "Kintai Bridge (Brocade Sash Bridge)", which is a historical wooden arch bridge over Nishiki River.

Kintai Bridge was built in 1673 by the lord, Kikkawa Hiroyoshi. Although it has been replaced several times due to its age, the design of the bridge still keeps to the original. I admired the graceful shape of the bridge for a while. Specifically, the timbered bridge girder is elaborately artistic.

In the meantime, while I took a train to Iwakuni, I went by an oncoming precious rolling stock on the track. It was a "Setouchi Color" train of the EMU JR West 113 and 115 series. In the past, most of the trains in this area were colored beige with a dark blue stripe. It is the so-called "Setouchi color". But, they have currently been changed to a dark yellow color. Only 3 sets of the 113 and the 115 series remain as Setouchi color trains.

I had a good day today as I saw a precious bridge and a precious train. 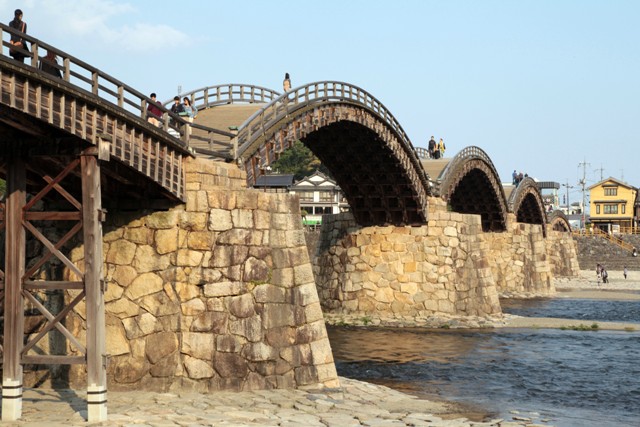