Iwakuni Station in the Twilight 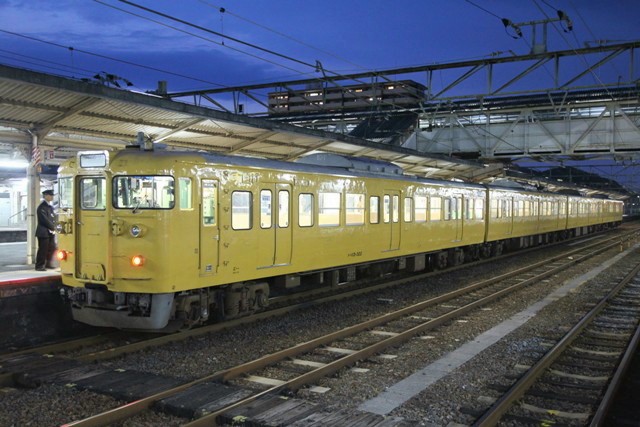 
After visit to Kintai Bridge (see my blog on May 1st, 2013), we returned to Iwakuni Station on the JR West Sanyo Line to go to Hiroshima City. We spent a lot of time enjoying the scenery of the bridge and a historical park nearby; so, by the time I arrived at the station, the day had completely set in. Since I found there was a wait for the next train, I had a time to see several rolling stocks standing at the station. Rail fans are always busy while traveling.

Look at the top photo. It is an EMU, JR West 115 series, a standard commuter train with a dark yellow body color. It is the so-called "New Hiroshima color", which is a new standard train color in the Hiroshima area. Frankly speaking, it is not my favorite color; however, it looks beautiful in the twilight, probably because it is brightly-colored.

On the other hand, the following picture shows a diesel rail car, Type KiHa 40 on the Gantoku Line. The Type KiHa 40 is a standard diesel rail car for local lines. It was launched in 1977 by Japanese National Railways (JNR). The body is two-toned yellow and white with a gray stripe, which is called "Hiroshima color" among rail fans. It also looks beautiful in the twilight.

Escaping from the urban jungle, we were standing on the very quiet platform of Iwakuni Station in the twilight. It got quite late. 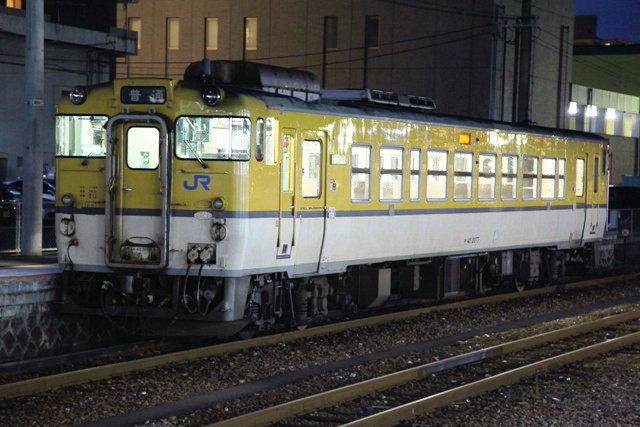