Rush of Cool Air on the Chichibu Railway 
I just celebrated New Year, but I can't believe that it is September already. Before introducing the topics of autumn, I would like to keep to the subject of summer a bit more.

We witnessed record heat this summer. The maximum temperature was 41 degrees Celsius, which was the record-high in Japan. The only thing I could do was escape the city at the weekends to go to cool places. Oku-Chichibu is one of the famous recreation areas in the western suburb of Tokyo. By taking the Chichibu Railway, we can reach a deep and cool forest easily from downtown Tokyo.

Fudotaki Waterfall is located in the forest of the Oku-Chichibu area near Mitsumine-guchi Station on the Chichibu Railway. The height of the fall is only 50m, but it is a paradise in summer, as visitors can feel a rush of cool air there.

To get to this cool waterfall, you should ride on the "Paleo-express" train pulled by a steam locomotive (SL), the C58. A total of 431 Type C58 units had been manufactured since 1938; but, currently, only one unit, number 363 is operated. The 363 was manufactured by Kawasaki Sharyo in 1944, and had been operated on the Japanese National Railways. It was once retired in 1972, but came back to the track in 1988 to pull a sightseeing train, the "Paleo-express".

The cool waterfall and the nostalgic SL, the Chichibu Railway is full of attractions. 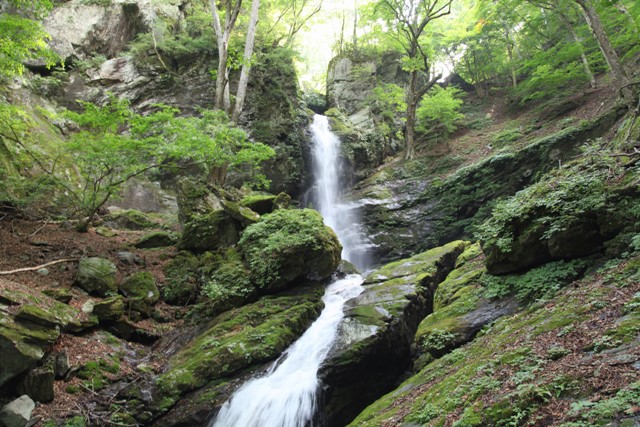