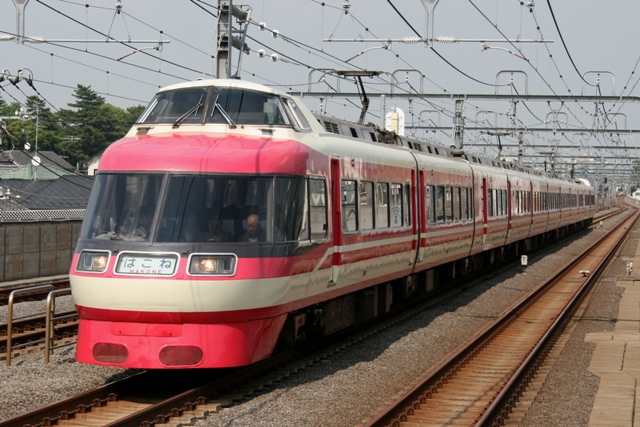 In the Tokyo metropolitan area, several private railway companies compete with gorgeous express trains as their flagships. One of the famous and venerable trains is “the romance car”, which is operated by Odakyu Electric Railway Company. Its route extends from Shinjuku; a subcenter of Tokyo to Hakone; a reputable mountain resort in a western suburb.

Odakyu first launched a resort train in 1935 as the “hot spring express”; however, it was forced to stop operating due to World War II in the 1940’s. After the war, Odakyu resumed the operation of the express in 1950 under the name of the romance car.

An epoch-making event occurred in 1957, when they launched the romance car, EMU 3000 series. This train established 145km/hour; the world’s fastest record of a narrow gauged railway at that time. Then, Odakyu launched new romance cars one after another.

Look at the top photo. It’s the oldest existing romance car; EMU 7000 series, which has been operating since 1980. I like this train very much, because the passengers can enjoy the view ahead. The cockpit is up stairs.

Meanwhile, the recent trend of the romance car is not only a resort train but also a commuter express. Look at the bottom photo. It’s the newest model; EMU 60000 series. This train operates between downtown Tokyo, such as Otemachi on the Tokyo Metro Chiyoda Line and Karakida; a commuter town in a western suburb of Tokyo.

Odakyu romance car … it’s a yearning since my childhood. 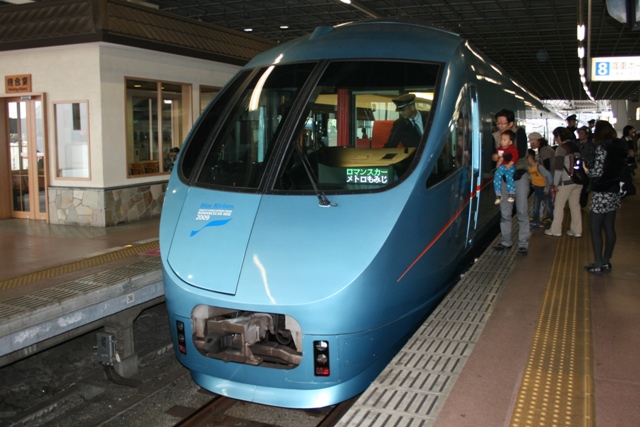 The newest model of the romance car, EMU 60000 series at Odawara Station