The Keiyo Line, Rapid Transit in the Bay Area 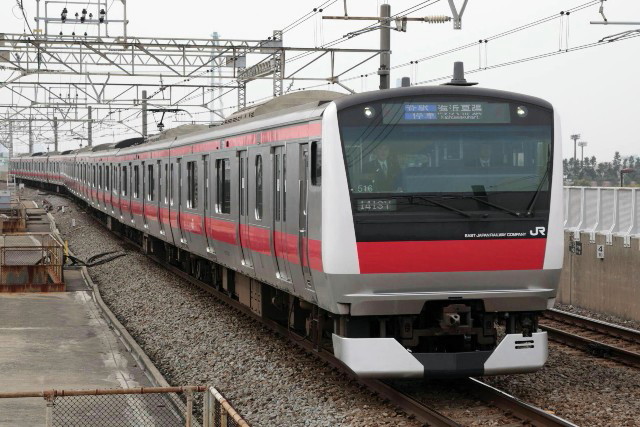 
Tokyo is a coastal city facing the Pacific Ocean. Between Kanagawa and Chiba prefectures, Tokyo is located in the innermost part of Tokyo Bay. The history of the bay area is described as a history of landfill. When the heavy industries were the focus of development in the 1950s to the 1970s, the construction sites were obtained by reclaiming land from the offshore area in Tokyo Bay.

The JR East Keiyo Line was fully opened on the reclaimed land in the Tokyo Bay area in 1990. Connecting Tokyo and Soga, the total operating length is 43km. The entire route is an underground or elevated, electrified and double track.

The trains are operated every 3 to 6 minutes on the Keiyo Line. The main fleet of the rolling stocks is the red striped EMU, E233-5000 series (see the top photo). It is the fastest and most convenient transit in the Tokyo Bay area.

One of the features of the Keiyo Line is that the new business centers have been developed on the route. For instance, Kaihin-Makuhari is the largest sub-center in the eastern part of the Tokyo metropolitan area. There are soaring skyscrapers and everywhere you look there are parks filled with greenery and light. The streets in Kaihin-Makuhari are designed in a grid. You can see articulated buses in the city, since the roads are wide enough to accommodate large and long vehicles (see the following picture). 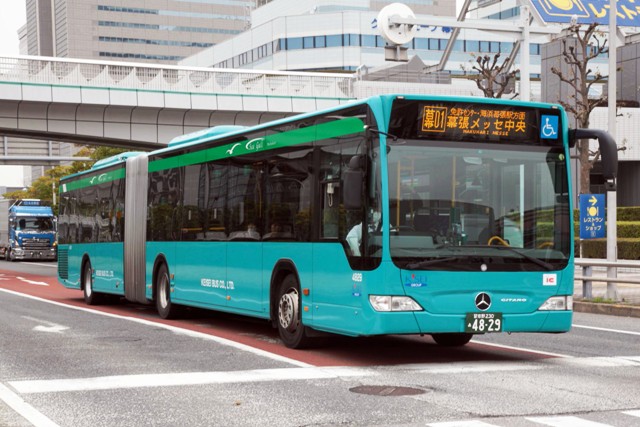