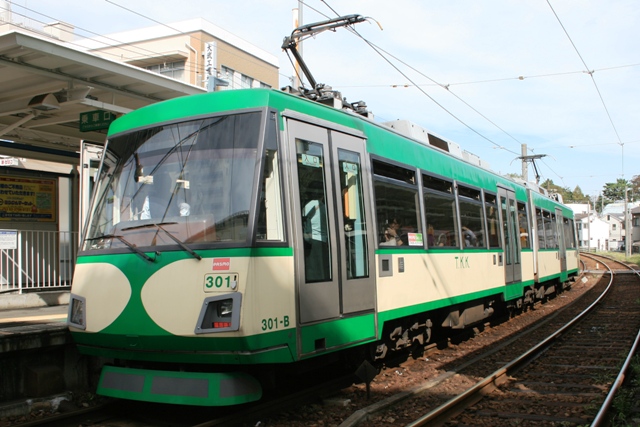 
Thank you for visiting Tokyo Railway Labyrinth. Following the second anniversary, the number of my blog posts exceeded 300 last week. I hope that people all over the world will continue to enjoy my blog. In commemoration of the "300th" post in the blog, I am going to show you an electric car with the number "300" in the name.

The electric car Tokyu 300 series on the Setagaya Line was launched in 1999. It is articulated and composed of two cars with three bogies. A total of 10 sets, 20 units, have been manufactured by Tokyu Sharyo. Each set is a different color such as red (photo at the bottom), blue, light green, pink, yellow and so on.

Set number 301 is the so-called "Tamaden Color", whose body color is the same as that of Tamaden (see the top photo). Tamaden (Tokyu Tamagawa Line) was an old tramway in Tokyo. It was constructed on the highway Route 246 in 1907. Unfortunately, the Tamaden was abolished in 1969 due to heavy traffic jams, and only the branch route exclusive track was left as the Setagaya Line.

I like the 300 series because it is a cute and precious tram in Tokyo. There are only two tram routes remaining in the Tokyo metropolitan area. One of them is the Toei (Tokyo Metropolitan Government) Arakawa Line and the other is the Tokyu-Setagaya Line. I wish the 300 series could always be operated in the railway scenes in Tokyo. 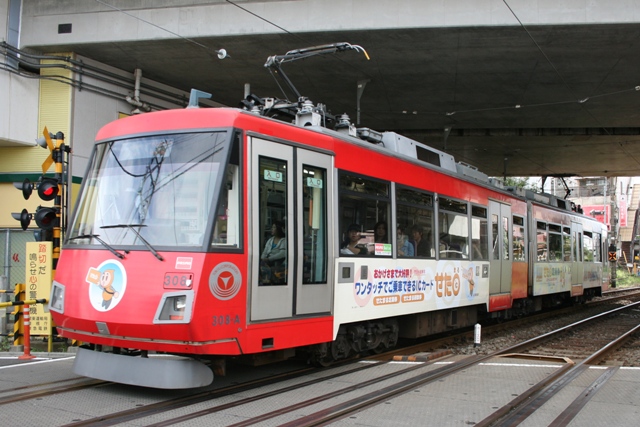