955-6 of the EMU JR Central 955 series, "300X" is preserved in SCMAGLEV and Railway Park
EMU JR Central 955 series, also known as the 300X, was a high speed test vehicle on the Tokaido Shinkansen. It was manufactured in 1995 by Mitsubishi Heavy industries, Nippon Sharyo, Kawasaki Heavy Industries and Hitachi to develop new generation Shinkansen trains. The name "300X" meant that it would be a successor of the existing EMU 300 series.

In accordance with the aim of the development concept, many kinds of new technologies were adopted on the 300X train, such as bolster-less bogies with active suspensions and a body inclining device to maintain high speed on tight curves. The 300X was a six-car train composed of all motor cars. Each induction motor had 405kW power output to generate high speed. On July 26th in 1996, the 300X broke a domestic speed record on the test run. It was 443km/hour (275miles/hour).

As a rail fan, I like the body design of the 300X, which has two faces. The 955-6 on the Tokyo side has a round-wedge shaped; meanwhile the 955-1 on the Osaka side has cusp shaped mask, which is similar to a duckbill in Australia. Specifically, the round-wedge shaped car, unit number 955-6 is my favorite. Unfortunately, the round wedge-shaped mask was not adopted on the front of new generation train, the EMU 700 series.

In 2001, the 300X was retired from the track after taking precious data for developing new generation Shinkansen trains. Currently, unit number 955-6 of the 300X is preserved in SCMAGLEV and Railway Park in Nagoya City. 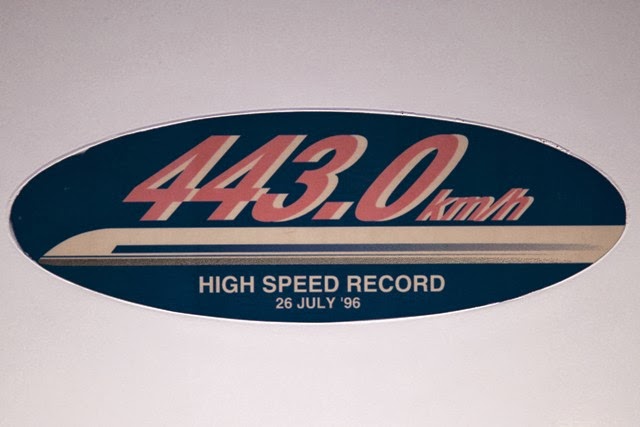 Memorial plate on the 955-6 of the EMU 955 series, "300X"
More information about rolling stock in SCMAGLEV and Railway Park:
http://museum.jr-central.co.jp/en/rolling-stock/