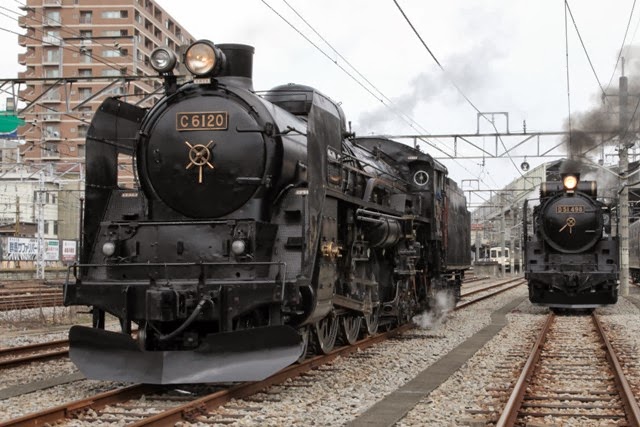 Steam locomotives C61 20 (left) and D51 498 (right) stand at Takasaki Rail Yard
Following the electric locomotive, EF 55 1, I am going to show you the other exhibition on Takasaki Railway Communication Day. Look at the top photo. It is a steam locomotive (SL), type C61, a 4-6-4 (Whyte notation) type SL that has a tender attached. A total of 33 units were manufactured from 1947 to 1949 by Mitsubishi Heavy Industries and Nippon Sharyo. Currently, unit number 20, namely C61 20 is the only one that is operated on the track.

C61 20 has a glorious history. It was manufactured in 1949 by Mihara Factory of Mitsubishi Heavy Industries in the western part of Japan. The mission of C61 20 was to pull limited express trains, such as Hatsukari (flight of geese) and Hakutsuru (white crane). It was indeed a star on the Michinoku (the northeastern part of Japan) tracks.

In the meantime, C61 20 was once retired from the tracks in 1973 with the progression of electrification throughout Japanese railways. It had been preserved in a park in Isesaki City, Gunma Prefecture since 1974.

In 2010, C61 20 was sent to Oomiya Rail Yard to resume the operation. Thanks to the rail fans in Isesaki City, this SL had been kept in good condition for 36 years in the public park. It was NOT damaged by vandalism. There was no property-loss.

Currently, C61 20 spends its second working life, pulling sightseeing trains in the Takasaki area. The star SL has come back to the iron tracks. 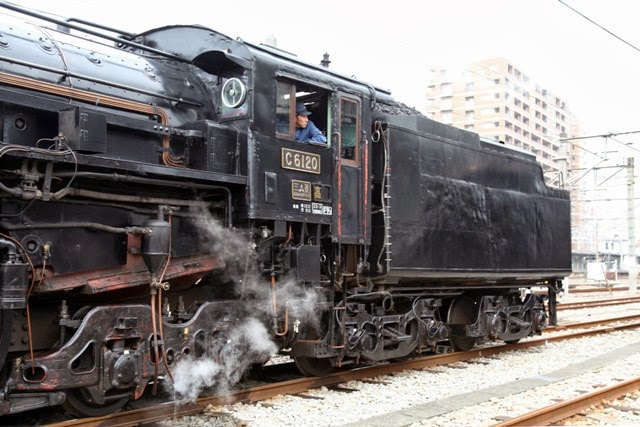