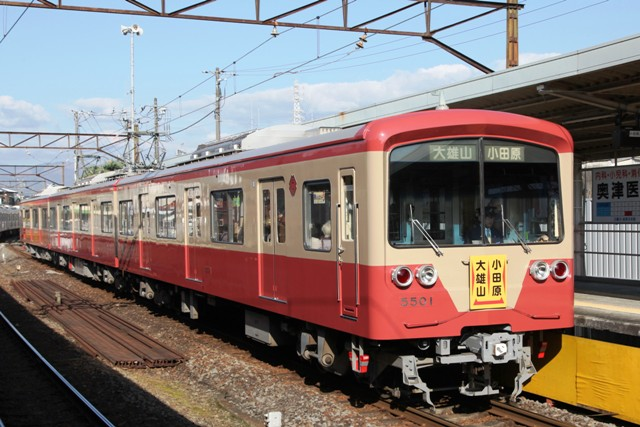 Revival color is the key trend on the Japanese Railways. Many companies are operating revival colored trains with previously used body colors to attract passengers. The main targets are sightseers and veteran rail-fans. One type of revival colored train is the "new modeled train painted with nostalgic revival colors". For instance, the Keio 8013F and the Tokyu 1017F belong to this category. We can enjoy extraordinary experiences, as the familiar trains change to nostalgic ones.

On October 1st, 2016, Izu-Hakone Railway launched a new revival colored train in commemoration of the 90th anniversary of the Daiyuzan Line. It was 5501F of the EMU 5000 series. 5501F is a 3-car train built by Tokyu Sharyo in 1984. The original color was white with blue stripes, but it has been changed to a dark rose-color with a beige stripe called Akaden (red electric car). This color design had been used until 1996 on the Daiyuzan Line. It suits the 5501F and is very nostalgic for me.

For your information, the Daiyuzan Line was opened in 1925 between Odawara and Daiyuzan stations. It was constructed to transport worshippers to the famous Saijo-ji Temple. The route length is 9.6 km. The track is 1,067 mm-size single and electrified. The electric system is 1,500 V DC overhead. Trains are operated every 12 minutes on average. Currently, the passengers are not only worshipers, but also local commuters and students going to Odawara, Yokohama, and so on. 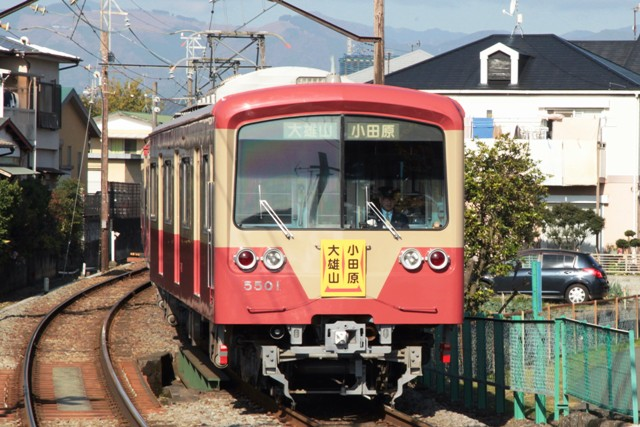