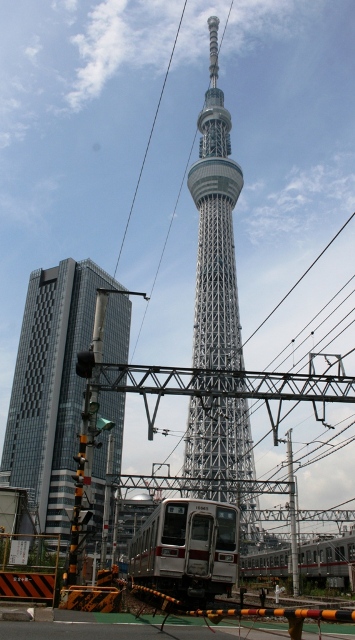 Back in the mid-2000s, Oshiage was just an interchange station in the Shitamachi (old town) area, a northern suburb of Tokyo. Four railways, i.e., Tobu, Keisei, Toei-Asakusa and Tokyo Metro-Hanzomon lines trains arrived at and departed from this station. Many passengers utilized Oshiage Station everyday, but their purpose was limited just to changing trains there.

Now, some 5 years hence, this is no longer the case. A lot of sightseers get off this station to visit a new landmark. That is the “Tokyo Skytree”, a new TV and radio broadcasting tower in the Tokyo metropolitan area.

The construction of the Tokyo Skytree commenced in July 2008, and it reached the target, a height of 634 meters (2,080ft) on March 18th, 2011, just one week after the 3.11 giant earthquake in the eastern part of Japan. It’s scheduled for completion next year and will be the world's tallest, freestanding, broadcasting tower.

The enterprise, which is constructing this new tower, is an affiliate of Tobu Railway. Tobu is the largest private railway company in the Tokyo metropolitan area. They operate 463km of track, and the routes extend from Tokyo to four northern surrounding prefectures; Saitama, Chiba, Tochigi and Gunma. This company expects that people will use the Tobu lines and visit the Tokyo Skytree. It will materialize because a number of people have already been flocking there to see or take photos even before the opening.

Tokyo Skytree… It’s a new landmark on the Tobu Railway. 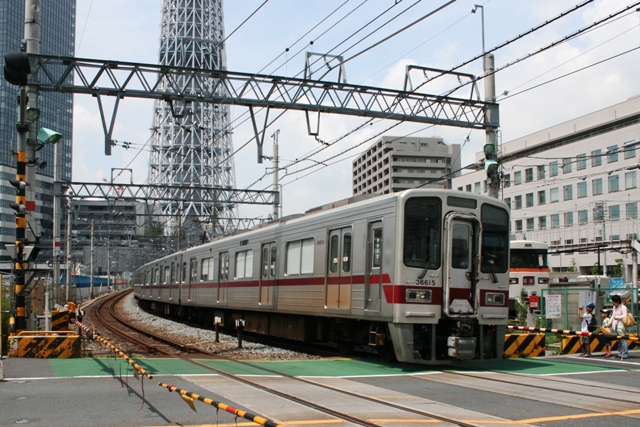